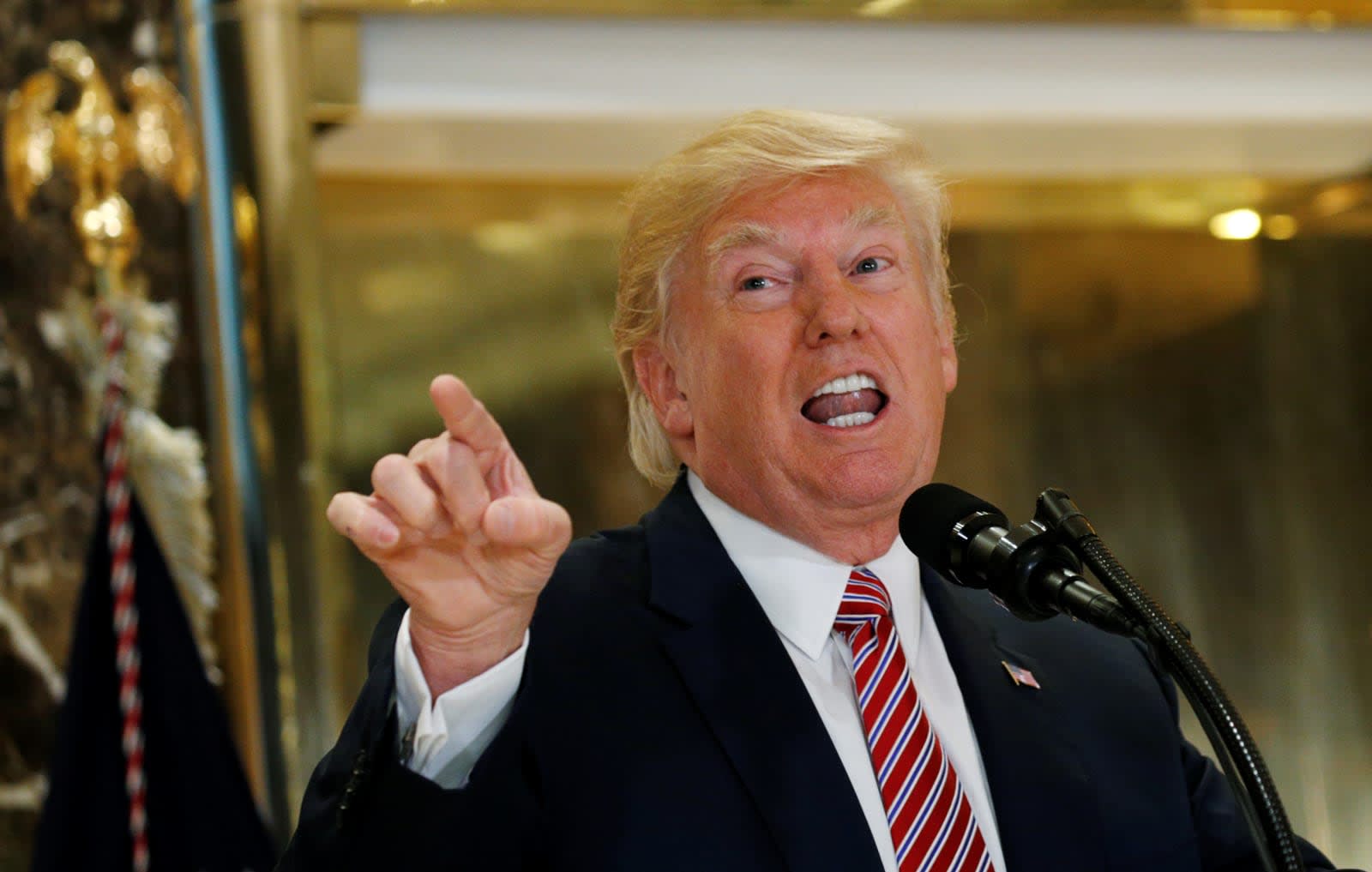 "My use of Twitter is not presidential," said President Donald Trump on Twitter last month, before adding the kicker in emphatic all caps: "it's MODERN DAY PRESIDENTIAL."

Yet nearly seven months into his presidency, Trump has so flabbergasted the public with his tweets that there has been a relentless stream of calls for Twitter to suspend his account.

The latest furor erupted on Tuesday: Trump's retweet of a cartoon person with a CNN logo over its head being hit by a train while attempting to hold it back. The train has Trump's name on it; the tweet read, "Nothing can stop the #TrumpTrain!!" This wasn't the first time the president has suggested violence against CNN on Twitter, but it was a particularly shocking choice of image mere days after an attacker drove into a crowd of counter-protesters at a white nationalist gathering in Charlottesville, Virginia.

In June, Minnesota Congressman and Democratic National Committee Deputy Chair Keith Ellison likened the president to a "social media bully" and said his account should be taken down. An online petition with 72,000 signatures calls for Trump to be banned from Twitter. A recent poll showed that 67 percent of Americans disapprove of the president's Twitter use.

Engadget compared all the tweets from Trump's personal Twitter account in his almost seven months in office -- over 1,200 tweets in total -- to the Twitter rules that govern who gets banned online. We wanted to see if calls for Trump to get booted from Twitter were valid.

The results, according to our analysis and the input of online-censorship experts, is that many of Trump's tweets since taking office may have been incendiary or untrue, but there were no clear-cut cases for banishment, based on how Twitter has enforced its rules so far. "Based on the rules alone, some of his tweets could constitute harassment. But I think based on the interpretation of those rules, not necessarily," said Jillian York, co-founder of Onlinecensorship.org, a project that tracks takedowns on various social media platforms.

Since becoming president, Trump has instead occupied a gray area. And Twitter's rules leave plenty of gray.

Before his election, for instance, Trump tweeted, "Incompetent Hillary, despite the horrible attack in Brussels today, wants borders to be weak and open-and let the Muslims flow in. No way!" This could be interpreted as hateful conduct.

Since January, he has avoided directly calling out religious or ethnic groups, giving him plausible deniability, even if his meaning remains unmistakable. For example, in reference to a travel ban on citizens from seven predominantly Muslim countries, Trump wrote, "Because the ban was lifted by a judge, many very bad and dangerous people may be pouring into our country. A terrible decision."

To York, the tweet would not be cause for dismissal, if only because it doesn't contain threats of physical violence. "Generally I think that Twitter errs on the side of only taking down violent incitement of hateful speech," she said. 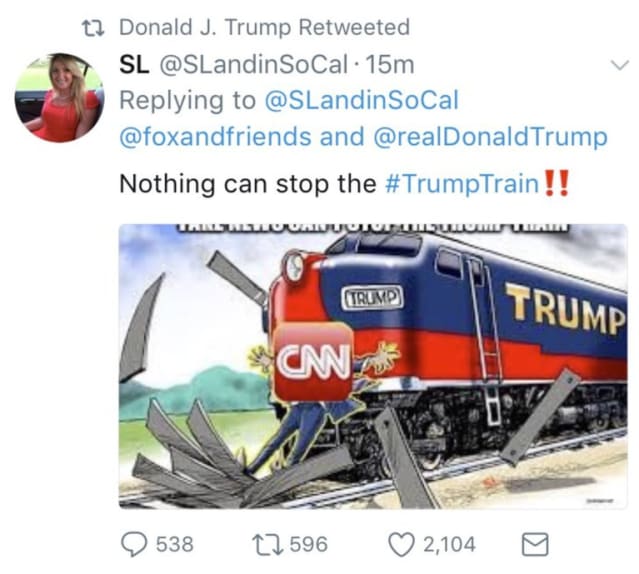 Trump has called former intelligence analyst Chelsea Manning a "traitor" and referred to The New York Times, CNN and NBC News as "the enemy of the American people." He has used insults like "Crooked Hillary" for his rival for the presidency, Hillary Clinton, and "dumb as a rock Mika" for MSNBC host Mika Brzezinski.

Trump uses tweeted insults as a political tool. Last August, angered about a segment on Fox News anchor Megyn Kelly's show, he told her, "I almost unleashed my beautiful Twitter account against you," according to Kelly in her recent memoir.

However, it's possible Twitter permits these attacks because politicians, activists and media institutions are public figures who are open to public criticism.

"Whether you're the president, a celebrity or Kim Kardashian, if you're in the public eye the kinds of things you are legitimately able to complain about are going to be narrower and narrower," said Mary Anne Franks, a University of Miami law professor and vice president of the Cyber Civil Rights Initiative who sits on Twitter's Trust and Safety Council.

Attacks on private citizens may be viewed differently. Last December, Trump tweeted insults about Indiana Union leader Chuck Jones that led to telephoned threats. "Nothing that says they're gonna kill me, but, you know, you better keep your eye on your kids," Jones told MSNBC. "We know what car you drive. Things along those lines."

While caustic attacks on private civilians could constitute harassment, Trump has refrained from them since taking office.

Still, predicting how Twitter will interpret "harassment" amounts to little more than a guessing game.

The company has pledged in recent months to curb abuse across its network and last month, reported taking action on 10 times as many abusive accounts as it did a year ago. But Twitter is a private company that can moderate speech as it chooses, and it has repeatedly declined to reveal how it decides whether a ban is necessary. While its rules are public, the way Twitter interprets those rules -- outside blatant cases involving racism or threats of physical violence -- remains an enigma.

Franks said members of Twitter's trust and safety council -- advocates and academics who advise the company -- only provide general guidelines for managing harassment but don't discuss specific accounts. A potential decision to ban Trump would have to come from inside the company, not the council.

In practice, Twitter appears to limit censure as much as possible -- in part because the company seems to rely on First Amendment laws as a guideline, according to Franks. "The way that most social media companies are trying to navigate these issues is by more or less anchoring themselves alongside legal conceptions," she said. "Even though they're entitled to act in much more broad ways than the government, they often tend to adhere to those traditional concepts."

This is one reason Twitter has appeared to give Trump a wide berth to insult public figures: because it's the same thing the law does. Even then, York says certain famous people -- including Trump -- are treated more leniently by Twitter. "I would say that they're definitely creating an exception for him," she said.

Twitter CEO Jack Dorsey hinted at a more liberal handling of Trump when he told Wired that its takedown policy accounts for "newsworthiness." "So we're not taking something down that people should be able to report on and actually show that this is what the source said," he said. "It's really important to make sure that we provide that source for the right reporting, and to minimize bias in articles."

"The problem for Twitter is going to be ... the day that something Donald Trump says on Twitter actually gets somebody killed." -- Mary Anne Franks, University of Miami

The key question is whether Trump should receive more scrutiny or less from moderators as arguably the world's most powerful human.

On one hand, his tweets -- including the insults -- indeed constitute newsworthy, political speech that the public has a right to know about. More free speech than a regular citizen, the argument goes, should be permissible. Bolstering this argument is a recently filed lawsuit against Trump from the Knight First Amendment Institute claiming that blocking citizens from his account is restricting their freedom of speech.

"Imagine a world in which the only Trump that we heard was the one that was carefully scripted by lawyers and advisors," said Ben Wizner, director of the ACLU's Speech, Privacy, and Technology Project and attorney for Edward Snowden. "We would be deprived of invaluable information about the president's state of mind, about his beliefs, about his erratic tendencies, about his television viewing. This is all information that has provided citizens with a window into who Trump is."

On the other hand, the weight of Trump's words as president has graver consequences than in the case of an average user. A mean tweet about Chuck Jones may not constitute harassment if a private citizen writes it. When Trump broadcasts it to 35 million followers, Jones receives threats. Similarly, for a regular citizen to post a gif of Trump beating up a CNN logo or ramming it with a train, it's considered "punching up"; on the president's account, it looks like a threat to the press -- as the Reporters Committee for Freedom of the Press has claimed.

Franks believes Trump's threats may only intensify in time. "The concern is -- especially with this particular president -- now you've got somebody with an incredible megaphone that can amplify abuse and harassment toward people in a way that's probably unlike any other person on Twitter," said Franks. "The problem for Twitter is going to be -- and I'm sorry to anticipate that this is probably going to come soon -- the day that something Donald Trump says on Twitter actually gets somebody killed. So at that point I think Twitter's going to have to recalibrate. But until then, I think they're really going to probably err on the side of leaving things up."

Let Trump say what he wants as long as he doesn't cross any red lines and someone might get hurt. Twitter would then need to explain why it let his harassment slide for so long.

Shut him down and the company may take hits from free speech advocates as well as Trump supporters. What's more, Trump's tweets draw millions of users to the service every day. To ban Trump from Twitter would mean the private company loses one of its most valuable users, thereby making itself less relevant in the daily news cycle.

A reasonable first step may be for Twitter to acknowledge that Trump and other public figures are exceptions to its usual rules and codify that in its policies. Twitter and Facebook are not neutral platforms for expression. It was Trump's election that prompted Mark Zuckerberg to admit as much. Recently GoDaddy and Google cancelled domain registration for neo-Nazi website Daily Stormer for violating their terms of service. Now the rules set by services like Twitter will play a major role in defining what it means to be "modern day presidential."

In this article: Censorship, DonaldTrump, FreeSpeech, gear, JackDorsey, longread, politics, twitter
All products recommended by Engadget are selected by our editorial team, independent of our parent company. Some of our stories include affiliate links. If you buy something through one of these links, we may earn an affiliate commission.