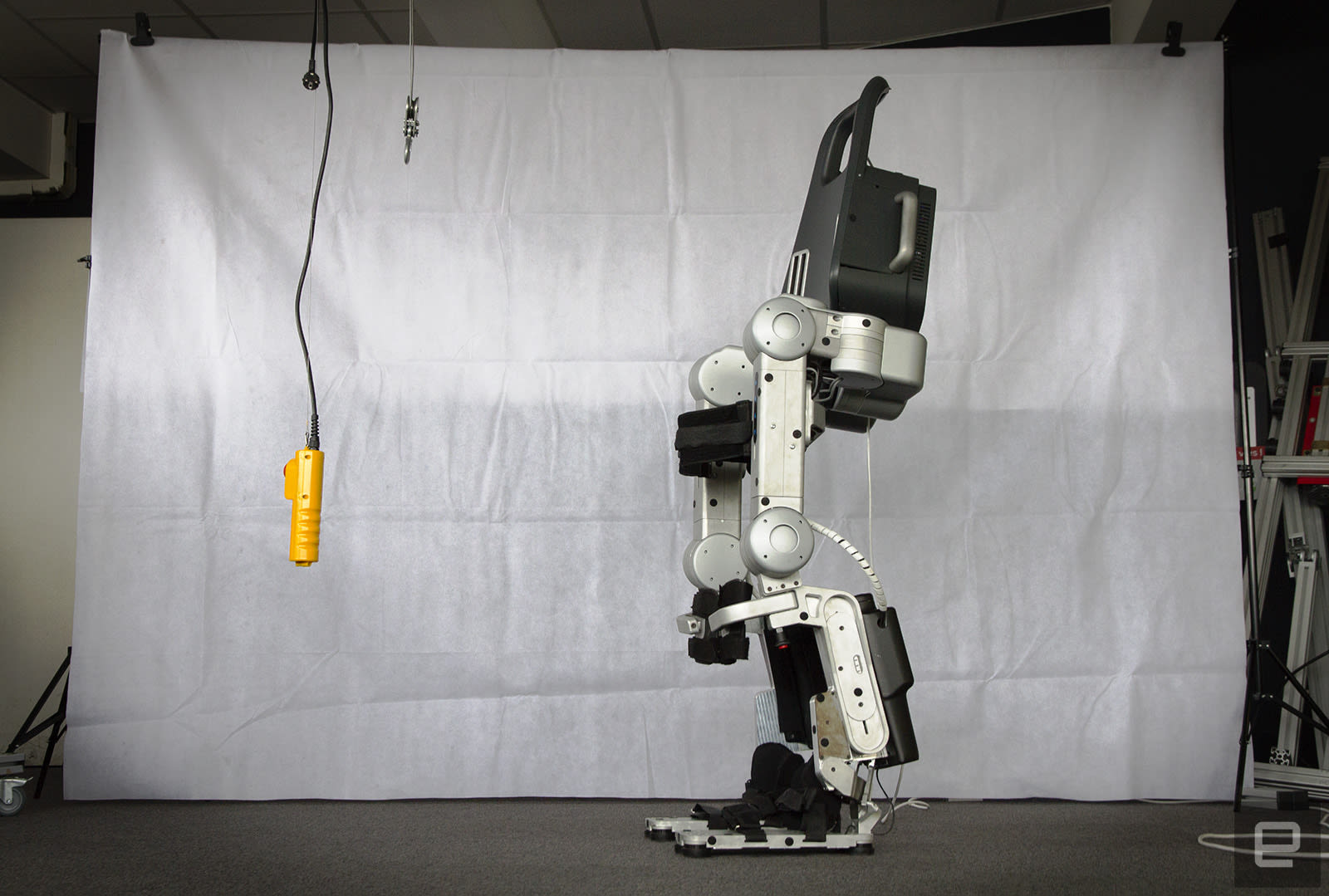 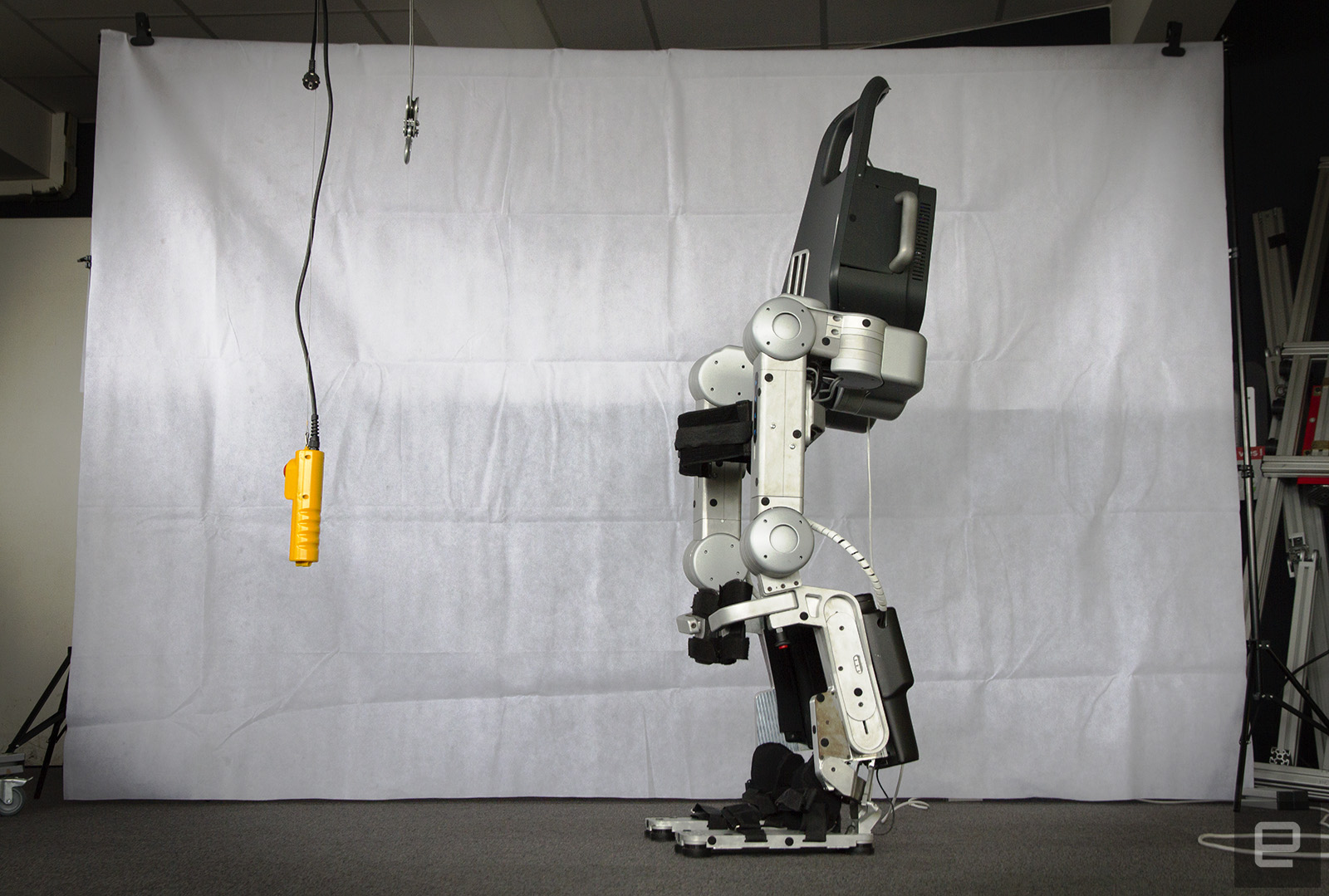 There's a reason you've never seen fully autonomous exoskeletons that help the disabled walk without crutches: Building one is crazy hard. But the founders of a Paris-based startup called Wandercraft are uniquely qualified to do it. They're roboticists who happen to have loved ones in wheelchairs, giving them both the expertise and motivation to develop an exoskeleton that helps users walk again. After years of development, they're nearly ready to show it to the public, following a round of promising patient trials.

Wandercraft ran successful preliminary trials with a handful of clients using "Atalante," its latest prototype. "There was such a strong emotional response from our test subjects," said Managing Director Matthieu Masselin. "For a lot of them, it was the first time they had been able to walk since their accidents."

A lot of companies have tried to develop exoskeletons for paraplegics, but models from Ekso Bionics, ReWalk and others require crutches, which heavily stress patients' shoulder muscles. That limits training and rehab sessions, as patients often need days to recover from muscle fatigue. Paraplegics want a device that lets them be vertical and walk a bit, preferably as often as possible. That would help them deal with a host of medical problems that able-bodied folks don't experience, like cardiovascular issues, pressure sores, incontinence, loss of muscle tone and depression, to name a few.

Being able to stand and walk without the discomfort of crutches would not only provide a huge psychological boost but also help reduce or eliminate many of those symptoms. "Our friends in wheelchairs told us, 'OK, if there was a device that would enable us to be able to walk again, there is no price that I wouldn't pay,'" said Masselin.

Without crutches, assistive exoskeletons (or "exos," as the team prefers to call them) are orders of magnitude more complex. Wandercraft's latest device, the fourth-generation model, weighs nearly 130 pounds (60kg) and must have perfect, humanlike balance so it won't fall over and injure the patient. "We discovered that stability and the human gait are some of the hardest problems we've ever encountered in robotics," Masselin said.

Unlike most current exos, which are more like motorized braces, the Wandercraft is a rigid, robotic structure. It has multiple powerful, compact electric motors at the hips, knees and ankle joints. A large battery is fitted at the back, along with an Intel Core i7-equipped microcomputer that does the complex math needed to ensure the machine can balance and walk.

Building a robot is hard enough, but attaching a human to it multiplies the degree of difficulty. "If the exo bends the knee, it has to stop before the knee of the person breaks, obviously," Masselin noted. 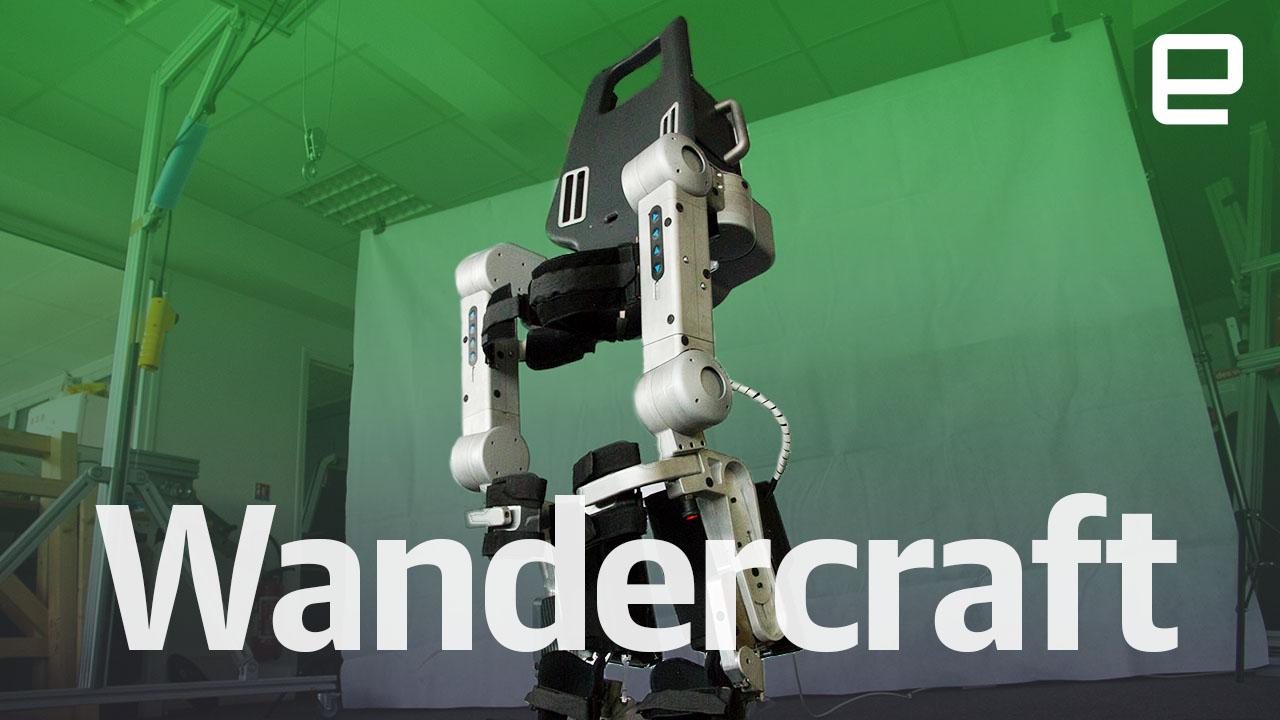 To make such a complex device work, the company recruits top roboticists, mechanical engineers and coders -- all fields in high demand. It must also enlist folks from biomedical, medical, biomechanical and other diverse areas and train them to work with the development team. To top it off, the exoskeleton and the code have to conform to medical protocols, and Wandercraft must run an elaborate regulatory gauntlet before patients can ever use it.

After five years of dealing with those nearly overwhelming challenges, the company finally tested its Atalante exo with patients. They're not ready to show video to the public yet -- for reasons I'll explain shortly -- but I was able to see it in action during a private showing.

Patients are first attached to the device by straps that are specially designed to distribute pressure evenly, at the waist, hips, knees and ankles. Those can fully support users' weight while their feet are placed on metal walking pads with rubber grips.

You start by sitting in the device and then make a gesture to stand up by bending at the waist. That activates motors that automatically drive the exoskeleton to a standing position. Walking can then be cued either by patient gestures or automatic programs started by the therapist.

The gait movement is obviously slow, but patients can take multiple steps without any crutches or external assistance. They assume a slightly bent posture, but it looks far more comfortable than the demonstration I saw of Ekso Bionics' system back in 2013. I'd describe the motion as controlled lurching, but keep in mind that such tech has never been tried and many of the test subjects hadn't risen from their wheelchairs in years. With time, patients would develop more skill, and the exoskeleton is bound to get smoother. Despite the limitations, Wandercraft, and particularly the patients, saw the trials as a success. "It was huge for the team, because we'd been working so hard on this device for many years," Masselin said. "But for those people, real users, it was even stronger, emotionally speaking, because they could really see the potential of the device. And a lot of them told us they were sad to have to stop the test."

Despite their obvious enthusiasm, Wandercraft is quick to tamp down expectations. "Showing people too early what you're doing and giving them grand visions that you are not going to be able to deliver after that, we think is very, very negative," said Masselin. "We don't want to stress people by giving them false hope." For those reasons, it plans to show doctors and physical therapists video of the device in action before the public sees it.

The company just received a much-needed €15 million ($17.6 million) funding boost and has a careful plan to deliver its exoskeleton to market. The design and development is now finished, so Wandercraft is entering the specification phase to define exactly how patients and medical personnel can use it. By the end of the year, Wandercraft will unveil its exoskeleton via a demonstration video to the public.

The next step after that is the so-called CE Marking, or European equivalent of FDA certification. It hopes to receive that sometime in 2018. Afterwards, it can sell the suit in Europe for use in medical facilities under the strict supervision of trained specialists. The company expects to put its first exeoskeletons in medical facilities by the end of 2018. It will eventually chase FDA approval so it can market the device in the US. 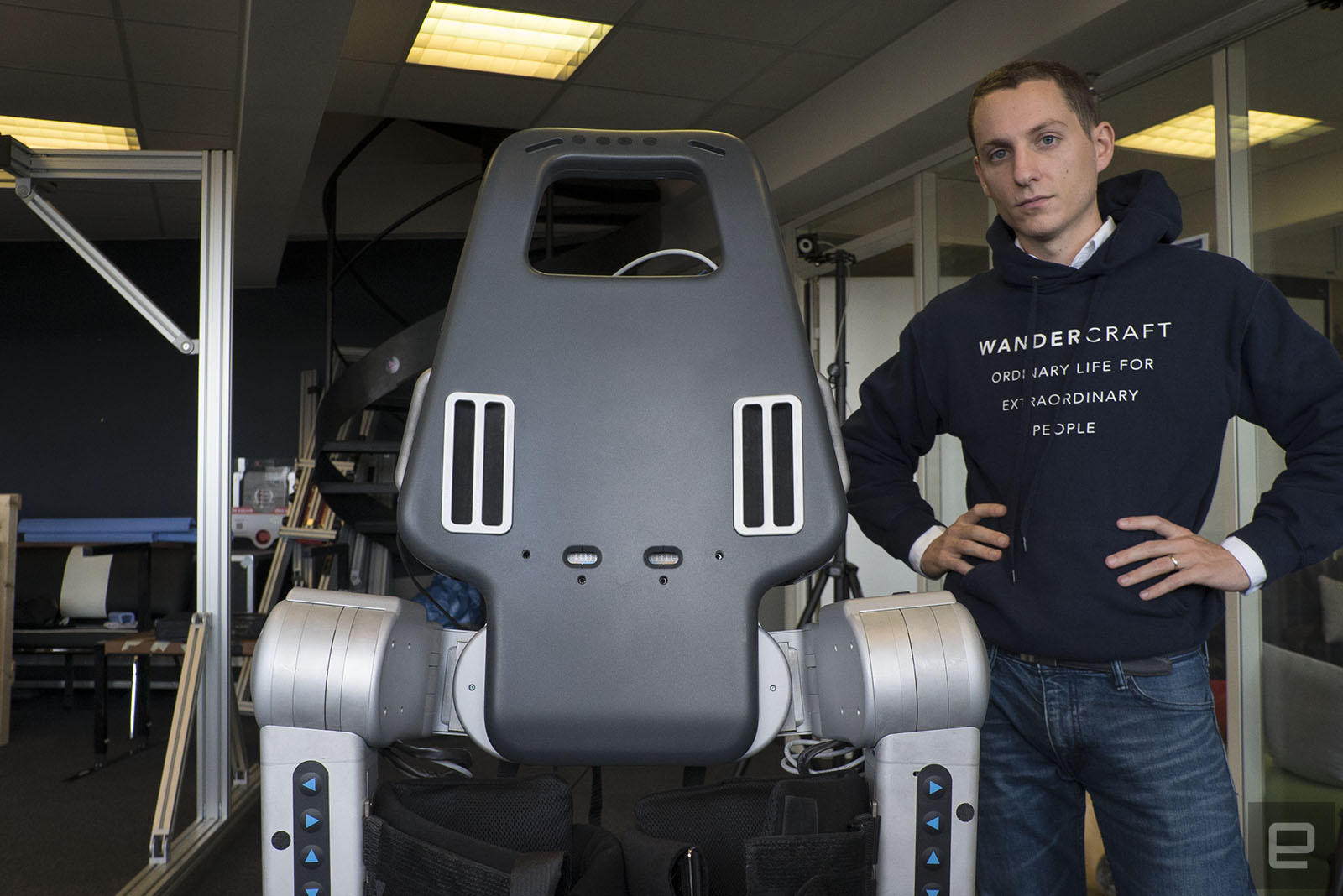 Wandercraft has bigger dreams though. Next, it wants to build a lighter, fully autonomous version of its suit for personal use by paraplegics. Once users strapped it on, they could go out of their homes and walk in a park or other uncrowded location. That requires even more advanced tech, as the suit would need to be able to handle obstacles like stairs. As it stands right now, even a pebble can throw off such devices.

The company has taken on a risky and possibly not financially rewarding type of product. And yet it has recruited some insanely talented young people, including Physics Olympiad-caliber employees. So why would these folks do it, when there are more potentially lucrative opportunities in AI, self-driving and other areas?

The answer might lie on the company's LinkedIn page, of all places. When you see the callow money-centric culture of some major companies, Wandercraft's recruiting call is life-affirming. "You will have stunning colleagues, chosen because they are selfless team players and not lone geniuses," it reads. "We make advanced technology exo[skeletons]s that help mobility impaired persons and impact their health and happiness -- not pizza delivery apps."

In this article: Exoskeleton, gear, medicine, Paraplegic, robots, Walking, Wandercraft
All products recommended by Engadget are selected by our editorial team, independent of our parent company. Some of our stories include affiliate links. If you buy something through one of these links, we may earn an affiliate commission.