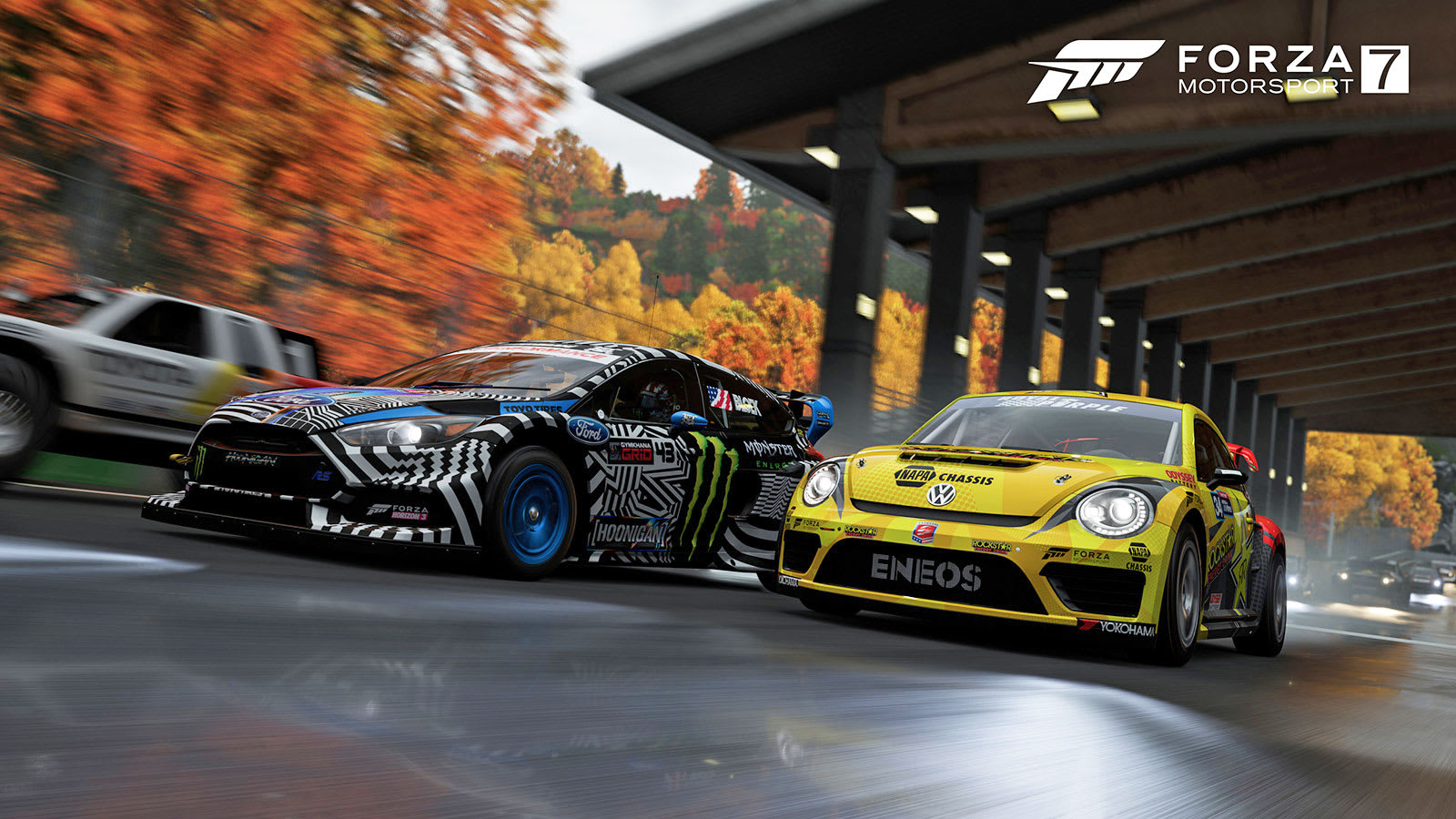 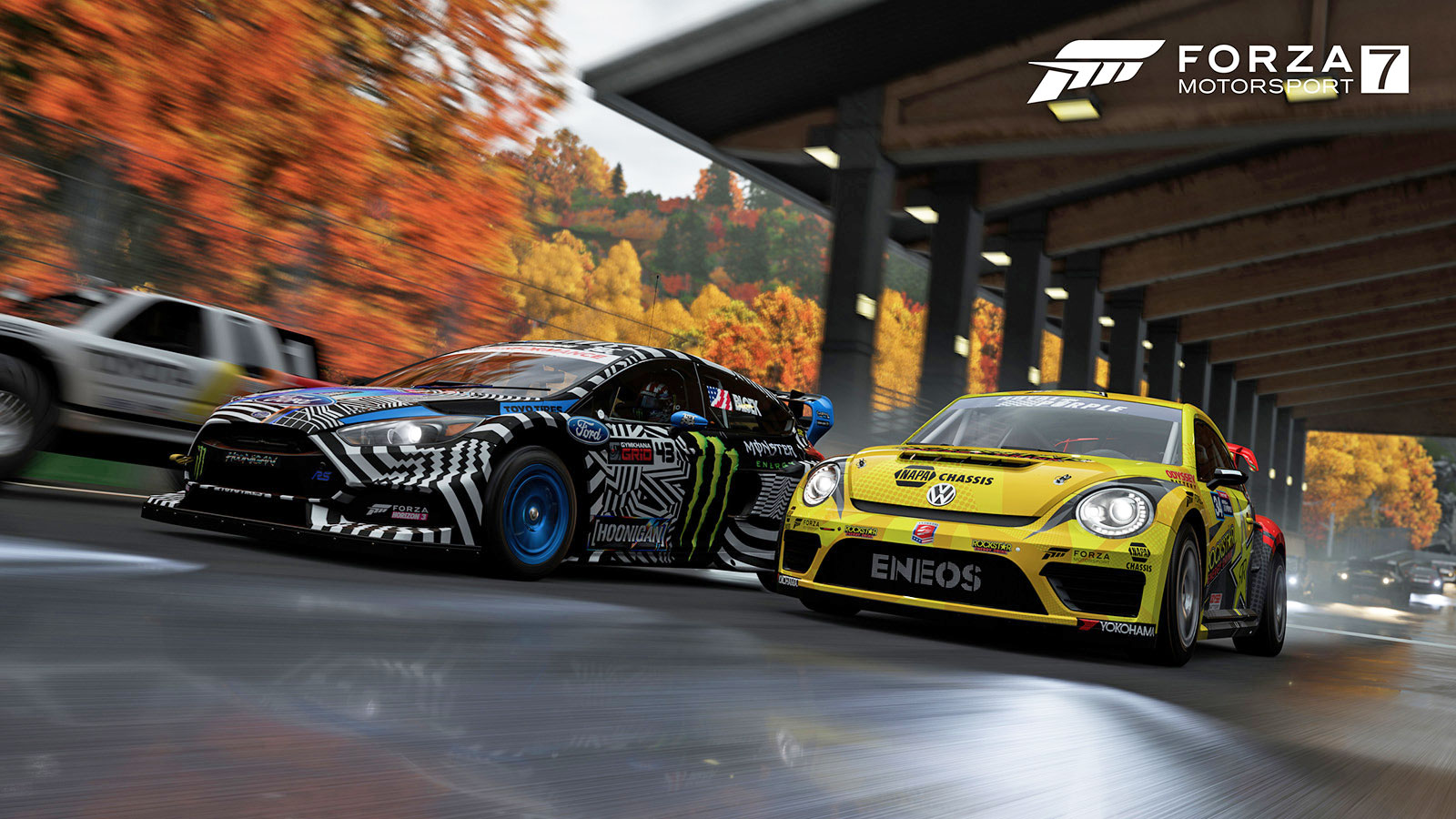 Let's look at the good side of this coin. Firstly, Forza 7 is stunningly gorgeous. The tracks and environments seem to have received the most graphical attention. In addition to active backdrops with crowds, helicopters and other set pieces, there are other details that bring the locations to life. The most visually stunning we found in our brief time playing was on the Dubai circuit, which is one of the introductory courses when starting the campaign. As you're driving, you pass through sandy deserts where the wind is actively blowing sand onto the course, creating drifts, and you can see it all happening. Even on less drastically sandy tracks like Laguna Seca, you'll see light clouds of dust wafting across the track.

The weather is more varied and challenging, too. Rainy conditions return, along with standing water, which will seriously affect your traction and handling. But there are also unusual conditions like early morning fog, which we experienced in an early race at Hockenheim. The fog not only cut down on how far forward we could see, but it caused the light to diffuse everywhere, making it tough to see when driving toward the sun.

The cars themselves haven't been radically updated, compared with Horizon 3 and Motorsport 6, but they still look beautiful, and every single vehicle's engine, interior, and trunk can be closely examined with Forzavista. But extra details have been added that bring you closer to actually driving these cars. For instance, many of the regular road cars' windshield wipers begin to wiggle and shimmy as speeds increase, showing the affect of wind on them. And as you may have seen in the trailers, the various bundles of wires and hoses in some race cars also vibrate as you're driving.

There isn't much change to the gameplay, either. The physics model is just as spot-on as any previous Forza Motorsport game. There are also plenty of driver assists and the signature "Rewind" function to aid less experienced and less skilled drivers play the game. Many, many race series are available in the campaign mode to complete, and you will be required to complete various series in order to move on to new and more challenging events. Races in the campaign can also now be lengthened or shortened depending on preferences. You could give yourself an extra challenge in trying to win with fewer laps, or lasting longer. Adding more laps could also give you more time to beat tougher opponents. And of course you have the option of participating in quick single races, split-screen multiplayer, online multiplayer, and special challenges if you get tired of the campaign.

There is plenty to unlock and collect, too. There are over 700 of those beautiful aforementioned cars to collect and race. Interestingly, having enough credits isn't enough to buy each car in the game. Forza Motorsport 7 employs a system in which you must have collected enough cars to unlock a new tier of vehicle. This sounds like it could be frustrating, and we can attest that some of the cars locked away early on seem like they should be readily available. But the positive part of this is that this system forces you to spend a little more time with some fun slower cars you might have missed if you could just buy anything you want. It also prevents you from getting cars that are too powerful, too fast.

There are loads of racing suits to pick from, too. They aren't all just different generic colors and styles either. There are both full racing suits and full-face helmets, as well as outfits with jeans, leather jacket, and open face helmets with goggles. There are a bunch of special novelty suits, too, ranging from disco-era tuxedos to The Dude's sweater and shorts from "The Big Lebowski." Unfortunately, all of these suits are awarded by random chance. You can get them by reaching new experience levels by completing races, or by purchasing prize crates, which can contain cars, suits, or mods which can be applied during races to earn extra cash and experience by performing racing feats.

These are all the great things you would expect from a Forza Motorsport game. Now we should talk about the things that we expected — but aren't exactly glad they still showed up. First among them is the homologation system. Most every race series is based on a style of car, rather than a performance class, for example hot hatches. It's an idea that sounds cool, since you'll get to pit a bunch of the same style of car against each other to see which is best. But the problem is that those styles span a wide range of performance. In the hot hatch category is both the Hyundai Veloster Turbo, and previous generation Honda Civic Type R. Those cars aren't actually comparable in real life, let alone virtual, due in part to the roughly 100 horsepower difference between them. As a result, the only way Forza will let you use a car like the Veloster is if it's hopped up to compete. For the average player, this isn't too big a deal since the game can automatically upgrade the car to compete. But for somewhat nerdier players, which include many of us at the office, the system precludes the opportunity to race the car in stock form and experience how it feels and compares to similarly performing cars.

Returning to the topic of cars, though the car list is substantial, there are quite a number of strange holes in various automakers' rosters. Looking at hot hatches once again, heavy hitters such as the Focus RS, Golf R, and Civic Type R all are present, some in multiple generations, but the Focus ST and any of the last three GTI generations are absent. And it's still impossible to ignore the lack of any production Toyotas in the game. 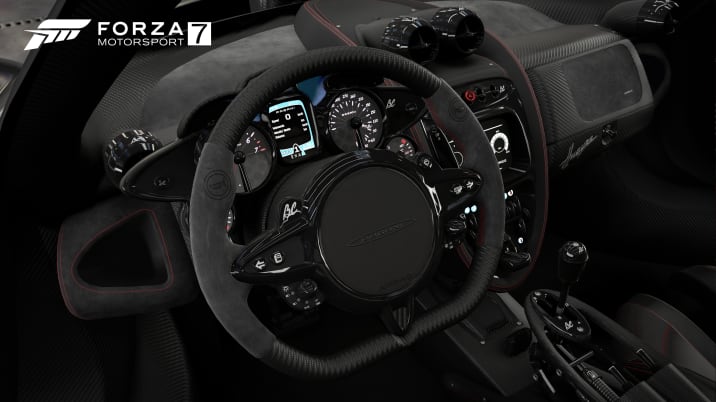 Modifications are still lacking for many vehicles, too. When I went to modify a Mazdaspeed Miata, the only bodykit options were the generic Forza complement of tow hooks and canards. This is particularly frustrating when many more options were available on the same car in previous Forza Motorsport games. That said, more popular cars do still have plenty of visual modifications available, and every car has the same wide wheel selection and paint scheme editor.

Finally, the reward system has really become convoluted, and those prize crates are the culprit. They're the only way to get items like custom racing suits, and they have to be purchased with credits you could've spent on upgrades and cars. And different boxes of different costs yield different random rewards. The more expensive, the better the chance at getting a rare item. But regardless, you'll mostly be getting more "mods" to use in races to earn more money and experience. This does help you advance and have the chance of earning a new suit, new car, or credit bonus, but you'll also probably just pour a lot of your credits back into more prize crates. It seems as though there could have been a simpler, more user-friendly system.

But when you look at the overall package, even with some of our gripes, Forza Motorsport 7 is still a superb racing game. It has loads of cars, spectacular graphics, lots of ways to tweak the experience for yourself, and it's accessible to both newbies and veterans alike. It's exactly what you'd expect from the series.

In this article: av, forza, forza motorsport, forza motorsport 7, forza7, forzamotosport7, gaming, racing
All products recommended by Engadget are selected by our editorial team, independent of our parent company. Some of our stories include affiliate links. If you buy something through one of these links, we may earn an affiliate commission.