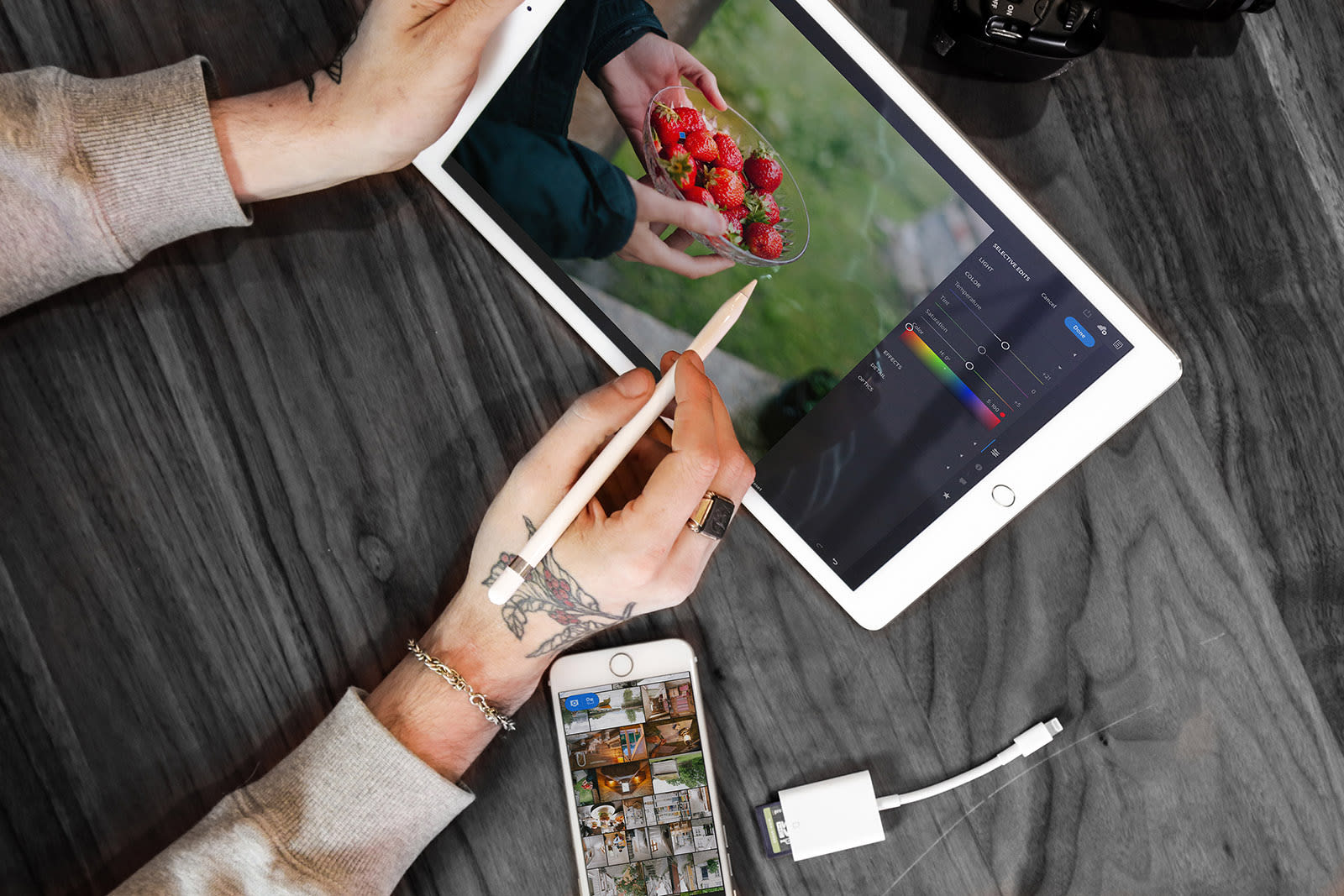 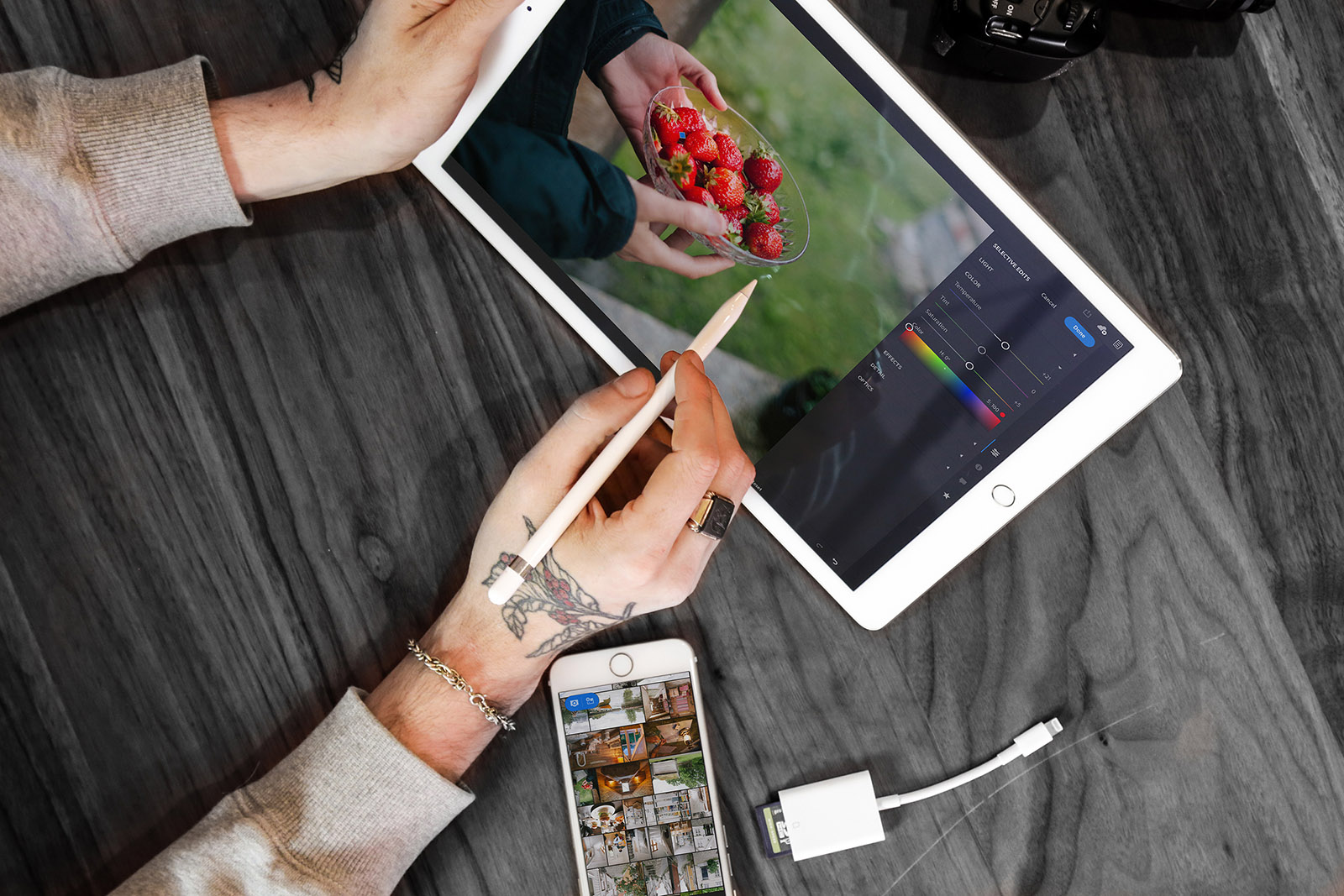 Adobe has unveiled a raft of new apps and updates for Max 2017, most notably a big revamp of Lightroom CC to make it more cloud-friendly for mobile users. The centerpiece is an all-new Lightroom CC with a 1TB cloud service -- the "Project Nimbus" app that leaked last year. It features a streamlined version of Lightroom CC that keeps images, edits and metadata synced in Creative cloud across PC and Mac, Android and iOS. For desktop users who prefer the current, non-cloud app, Adobe has re-branded it as Lightroom Classic CC.

To be clear -- because Adobe's new naming system is pretty darn confusing -- Lightroom CC is a series of apps app and a service. As Adobe describes it, Lightroom CC "is designed to be a cloud-based ecosystem of apps that are deeply integrated and work together seamlessly across desktop, mobile and web."

Despite the fact that it's cloud-based, Adobe says Lightroom CC is "built on the same imaging technology that powers Photoshop and Lightroom." The desktop app has changed considerably, however. The new version for PC and Mac has an all-new, simplified interface with streamlined sliders, presets and quick-adjustment tools, and some of the features in the old version of Lightroom CC are missing.

The prime feature of Lightroom CC is the cloud sync, which works automatically to save all of your RAW images, edits and metadata, letting you pick up where you left off regardless of your location or device. That feature eliminates the worry of whether you've saved images to a USB key or device, and lets you stop an edit mid-job and resume from the last action you took, even on a smartphone.

Another key new feature is Adobe Sensei, an AI algorithm that figures out what's in your photos and automatically tags them, much as Google Photos does. It can also sift through photos and pick the "best" ones based strictly on sharpness, color and other non-subjective considerations. Again, much like with Google or Apple Photos, Adobe added built-in sharing tools that let you build custom galleries and share them on social media or through the new Lightroom CC Portfolio integration app.

The mobile apps on iOS and Android have also been significantly updated, though they'll still work as they did before with Lightroom CC Classic. The iOS version gets Adobe Sensei search and tagging, an enhanced app layout and iOS 11 file support. Meanwhile on Android, Adobe has finally added tablet support and a local adjustment brush, along with the same Sensei searching as on iOS.

Using a preview copy, I tried out the new desktop version on Windows 10, and the new user interface (below) is significantly different and more like the tablet version. Gone are the top "Library," "Develop," "Map," "Slideshow" and other menus, replaced simply by "My Photos," and "Edit." All of that creates a larger interface for the image and reduces distracting clutter. 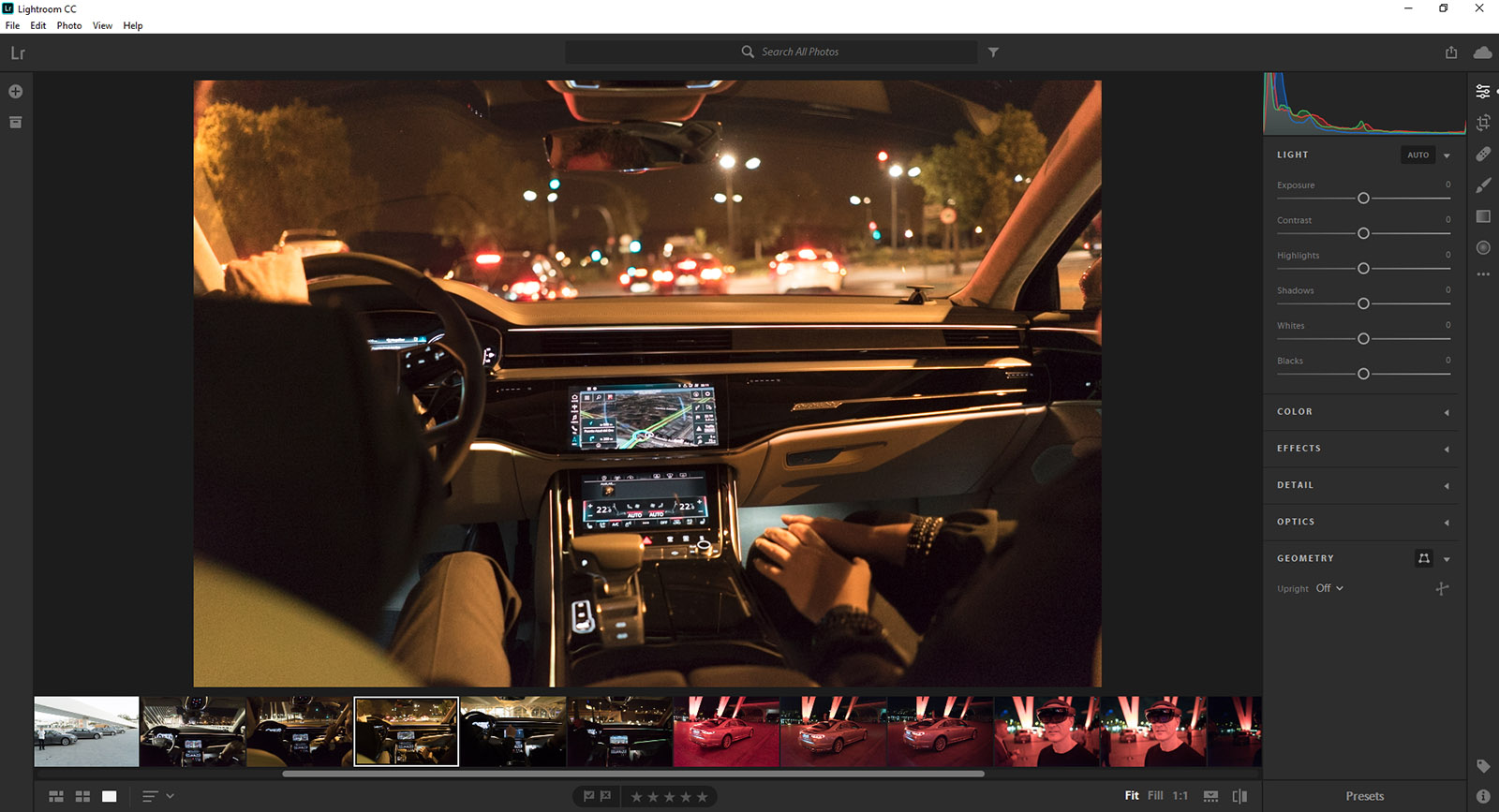 Photo organization has also been simplified, reduced to two grid sizes and a single image, eliminating the "Select/Candidate" and "Survey View." Most importantly, the crazy cluttered file tree on the left has been replaced with a much simpler system that lets you manage and, finally, move files around easily.

All of the tools from "Develop" are now in "Edit" (above), but some popular tools like "Tone Curve," "Panorama," and "HDR Merge" are no longer available, at least in version 1.0. There's now an "Edit in Photoshop" button that will presumably let you do more of the fine-tuning work, though. If you've got an established workflow and rely on those missing tools, you'll obviously want to stick to the Lightroom Classic CC version.

As for that Lightroom Classic CC app, Adobe has made a few small changes including a faster boot time, image previews, file imports, and a new color range and luminance masking functionality. It emphasized that Lightroom Classic CC "continues to focus on a more traditional desktop-first workflow with local storage and file and folder control," compared to the "cloud-centric" operation of Lightroom CC.

I personally liked the new version of Lightroom CC, as I always found the "classic" version to be a bit confusing and cluttered. Lately, I've taken to using Photoshop CC, but I can now see myself switching back to Lightroom CC for most of my photo editing chores.

The fact that you can pick up a RAW photo edit where you left off, whether you're on the train, at home or at work, is also a life-changing feature for me. After testing the Android version of Lightroom CC on a Galaxy S8 smartphone (above), I can confirm that the mobile app lets you do most, if not all of the image touch-ups that the desktop app does. That made it possible for me to work on the go without pulling out my laptop.

There are a lot of users, though, who depend on Lightroom to make a living, and have often automated the use of it to a large degree. For now, Lightroom Classic CC means those folks don't have to worry about switching, as it's still available for the same price. However, Adobe is slowly but surely shifting everything to the cloud. 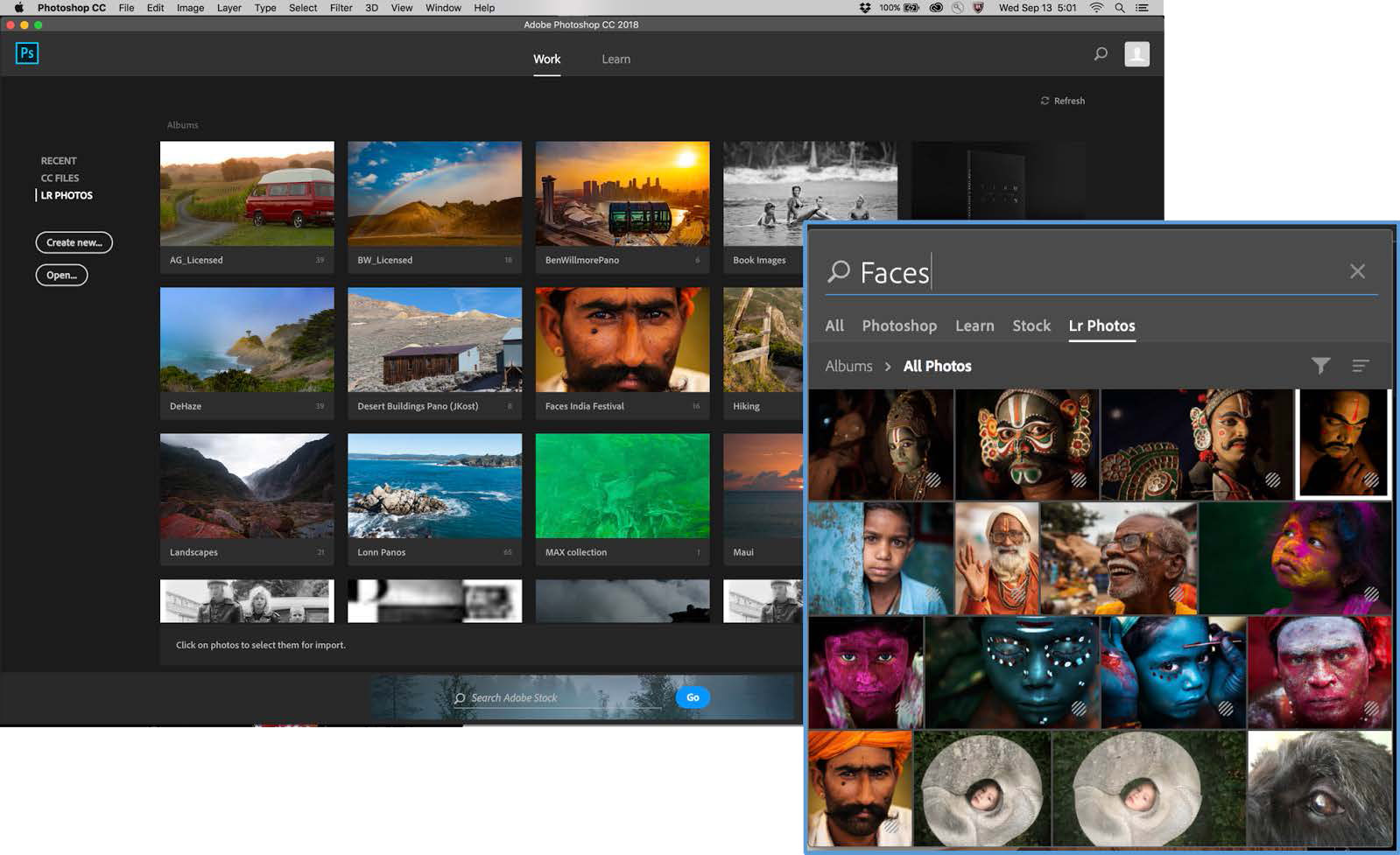 Adobe made some significant changes to Photoshop CC (above), including updates that will make it easier for cloud users to connect. It also added what it calls "major improvements to learning and getting started," thanks to interactive, step-by-step tutorials and rich tip tools. Other highlights include Lightroom photo access from the start screen (above), 360 spherical panoramic image editing, symmetry painting (tech preview), numerous brush tweaks, new font tools and much more.

The company unveiled three new apps that do three very different things. The first, Adobe XD CC, is aimed at users who want to design and prototype mobile apps and services, developed "in open partnership with the design community through a public beta," the company said. 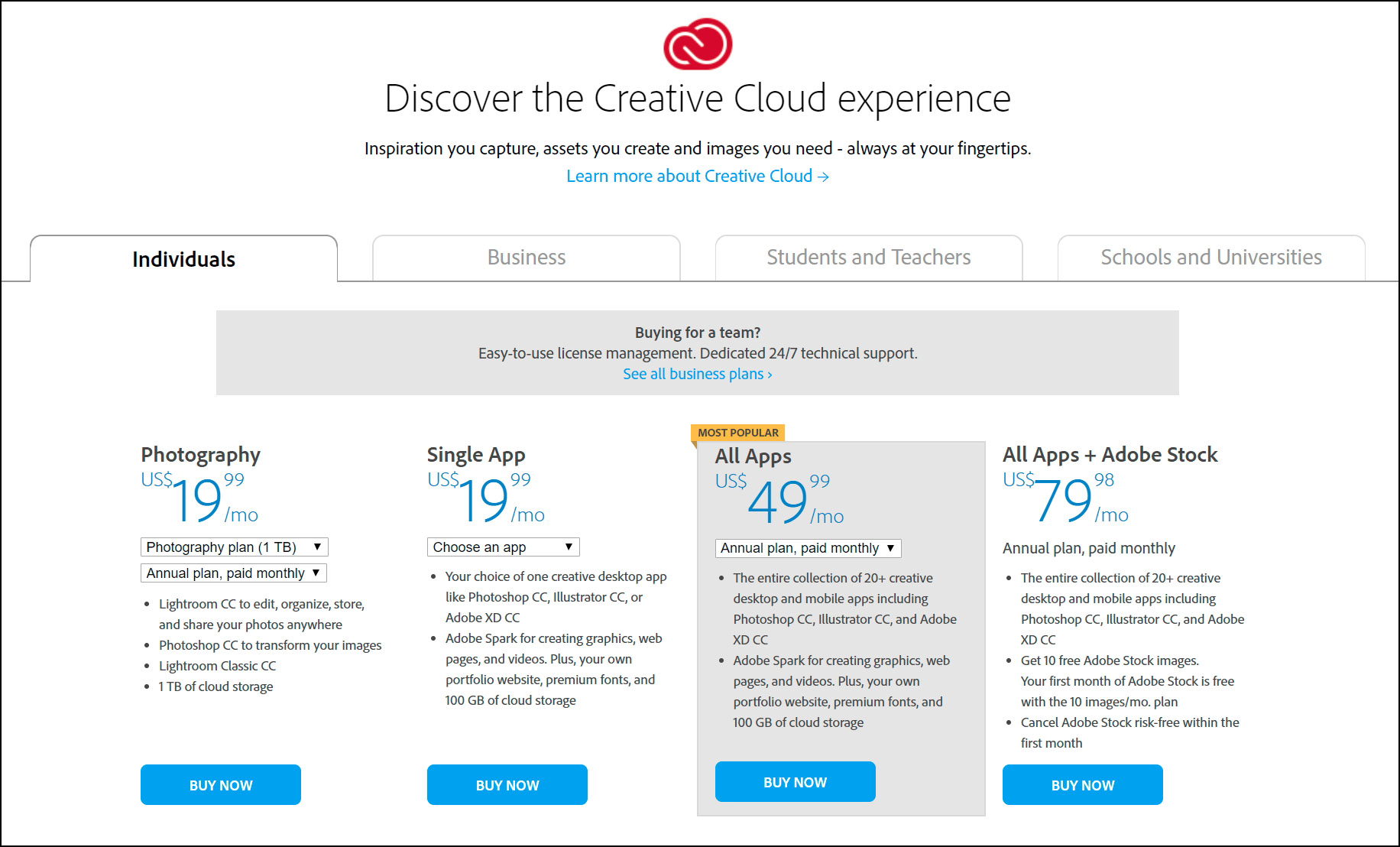 With the introduction of Lightroom CC, Adobe has introduced several new plans that, it has to be said again, are bound to create some confusion because of its naming system. First off, know that all of its image editing products, including Photoshop CC, Lightroom CC, and Lightroom Classic CC fall under the "Lightroom CC Photography Service" moniker.

With that in mind, there are three new photography plans, all available starting today. The first is the "Creative Cloud Photography plan with 1TB," which includes Lightroom CC (both the desktop and mobile versions) and Lightroom CC Classic, along with Photoshop CC, Adobe Spark with premium features, Adobe Portfolio and 1TB of cloud storage. That costs $19.99, but Adobe's discounting it to $14.99 for the first year.

The $9.99 "Creative Cloud Photography Plan" gives you the same features, but just 20GB of storage, while the all-new $9.99 "Lightroom CC" plan subtracts Lightroom Classic CC and Photoshop CC, while giving you back the 1TB of storage. Adobe will continue to offer Lightroom 6 as "the last stand-alone version of Lightroom that can be be purchased outside of a Creative Cloud membership." However, it "will no longer be updated with camera support or bug fixes after the end of 2017," it adds.

In this article: AdobeMax, CreativeCloudPhotography, design, gear, LightroomCC, mobile, personal computing, personalcomputing, video
All products recommended by Engadget are selected by our editorial team, independent of our parent company. Some of our stories include affiliate links. If you buy something through one of these links, we may earn an affiliate commission.