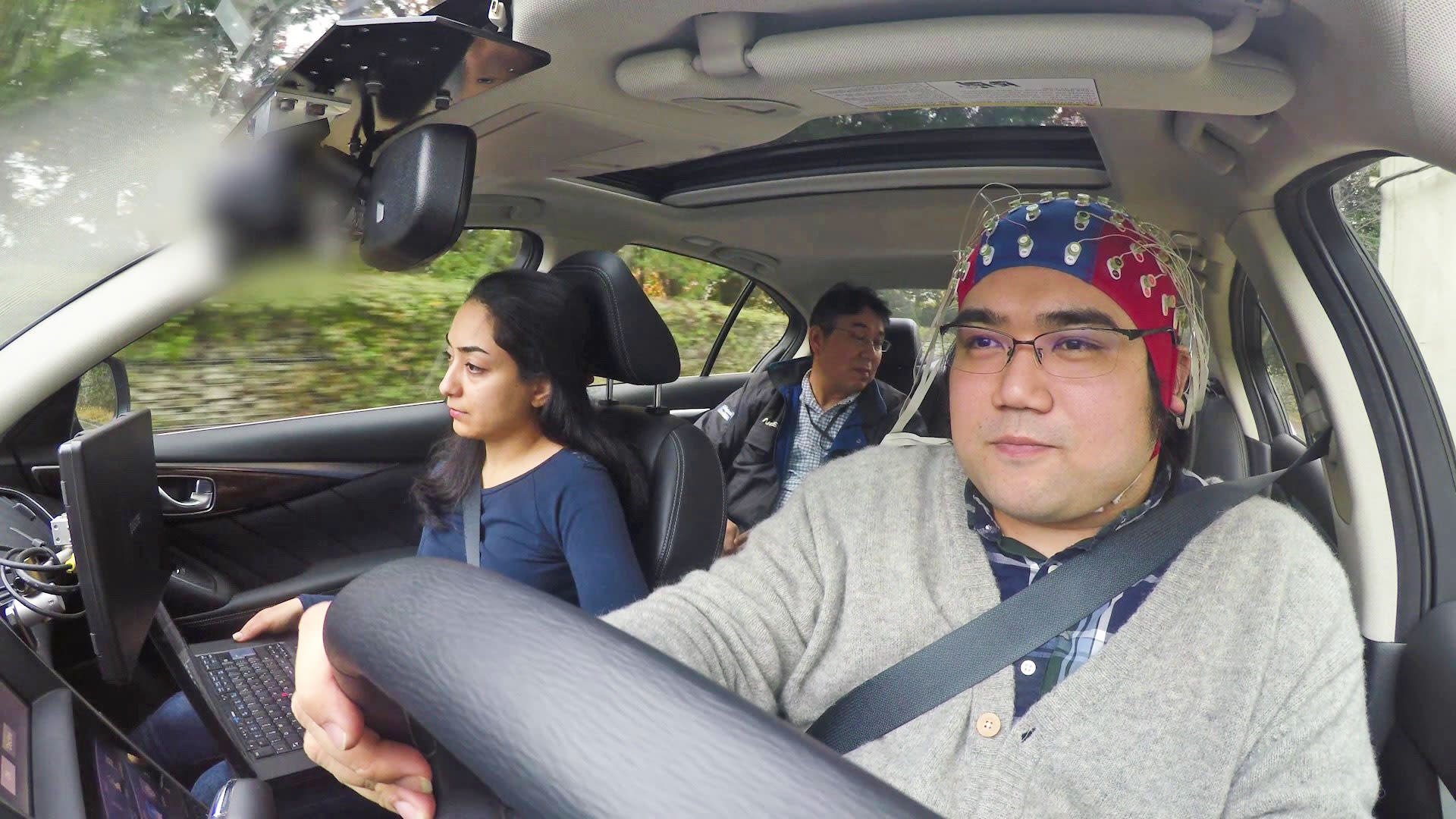 Most automakers are figuring out how to take the "driver" out of driving, but Nissan is using tech to make it more fun. It's researching what it calls "brain-to-vehicle" (B2V) tech that can read your brainwaves and figure out what you're going to do next. After the driver puts on a skullcap device that can measure brain activity, an AI system can then predict if you're going to turn or brake, and initiate the action 0.2 to 0.5 seconds before you react.

"When most people think about autonomous driving, they have a very impersonal vision of the future, where humans relinquish control to the machines," said Nissan VP Daniele Schillaci. "B2V technology does the opposite, by using signals from their own brain to make the drive even more exciting and enjoyable."

Nissan is on the cutting edge of green and autonomous tech with its Leaf EV, now packing about 150 miles of range and the semi-autonomous ProPilot system. Even when self-driving cars become the norm, however, manufacturers like Nissan say they'll still give drivers control if they want. As such, it's experimenting with ways to enhance manual driving and make it more fun. "Nissan is the very first manufacturer that is bringing real-time brain activity in vehicles as a means for enhancing driving pleasure," said Nissan senior researcher Lucian Gheorghe.

One of the more difficult, but interesting areas of self-driving research centers on the "handoff" of control from the computer to a human driver. Google's Waymo division wants to move straight to Level 4 or 5 self-driving, where no driver intervention is required, because it found that drivers were too distracted to take control quickly enough. Nissan's B2V system, on the other hand, is fully manual with just a minor technological assist.

In any event, automaker working on cars that allow both autonomous and manual driving will need to figure out the human factor. While Nissan says its research is focused on making driving enjoyable, its brain scanning tech could almost certainly make self-driving systems safer, too. "The potential applications of the technology are incredible," Gheorghe said. "This research will be a catalyst for more Nissan innovation inside our vehicles in the years to come."

In this article: BrainControl, BrainToVehicle, gear, Nissan, transportation, video
All products recommended by Engadget are selected by our editorial team, independent of our parent company. Some of our stories include affiliate links. If you buy something through one of these links, we may earn an affiliate commission.