Now there's yet another way to Google Assistant inside your house.

In case you hadn't heard, Google's Assistant doesn't just live in phones, speakers and televisions anymore. You'll see the Assistant pop up in small, connected screens meant for use around the house later this year, and we just spent a little time with Lenovo's first efforts: the 8-inch and 10-inch Smart Displays. It's hard not to think of them as just a pair of surprisingly handsome tablets, but after getting a sense of how the Google Assistant works on a purpose-built screen, it's clear that Amazon's Echo Show has some serious competition.

But first, the basics. The 8-inch screen on the smaller Smart Display runs at 1,200x800, while the larger version's 10-inch panel runs at 1,920x1,200. Other than that, the two versions of the Smart Display are essentially the same. Both use Qualcomm's SDA 624 chipset, both have large vertical speaker screens next to the left of their screens and both use tiny sliders on their right sides to physically cover their built-in 720p cameras. The (definitely non-final) software I tested on the Smart Displays worked best in landscape mode, but you can turn either of the Smart Displays on their sides to stand vertically thanks to a handy triangular hump.

But what are they actually like to use? Well, when they're inert, the Smart Displays are basically just digital picture frames that cycle though images in a Google Photo album. When you start talking to them, though, the Assistant's calming female voice responds with crispness and clarity through Displays' speakers. If you close your eyes and start talking to a Smart Display, the experience is nigh-indistinguishable from chatting up a Google Home speaker. That's a good thing, too: Alexa's deep ties to Amazon are nothing to scoff at, but if you're anything like me, having a voice assistant that can reach into the well of data I've already given Google gives the Assistant a distinct edge. 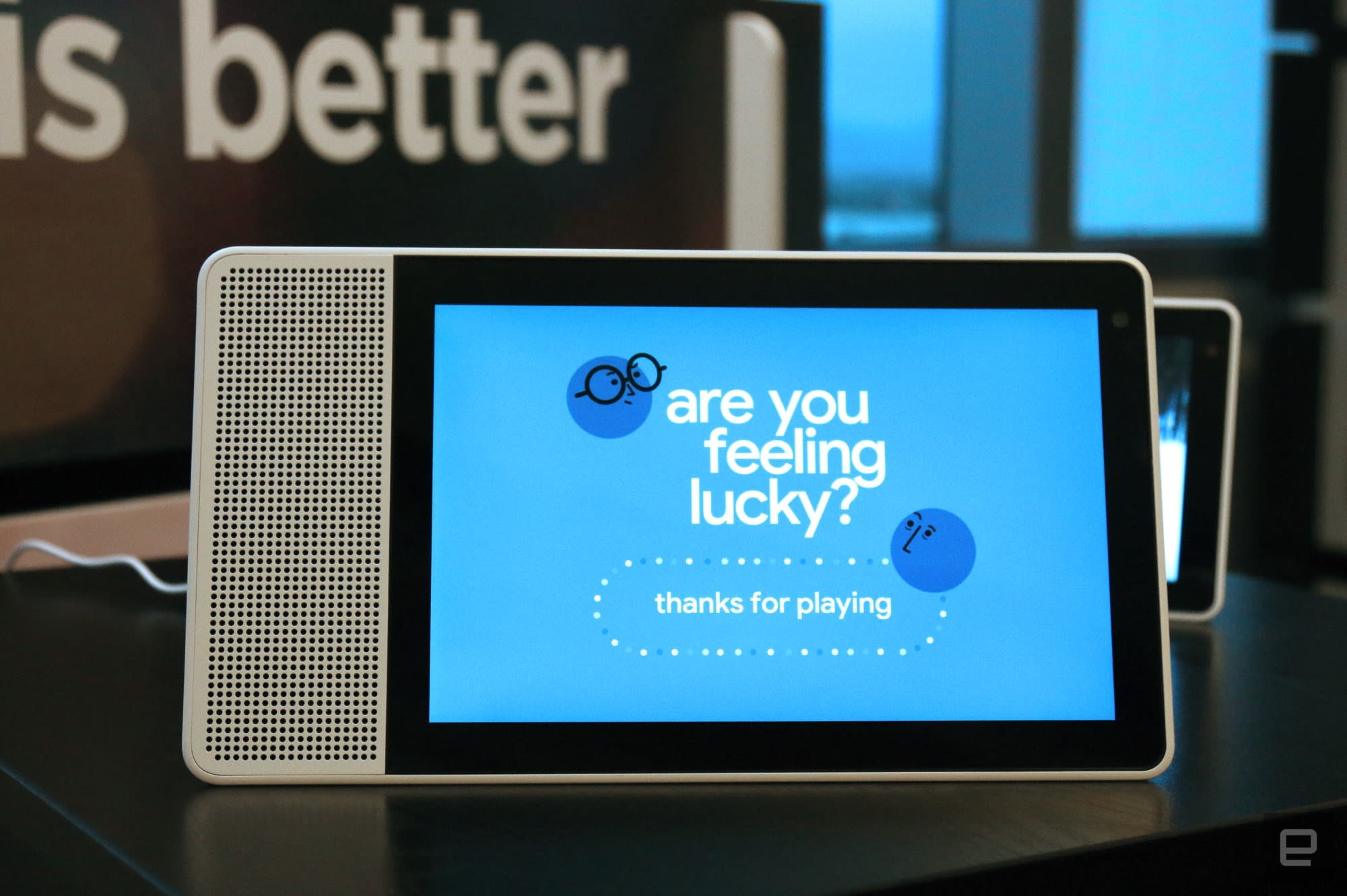 As handy as Google's Home speakers are, though, they're not great at succinctly conveying lots of information. Google's move to embrace these small screens, then, is proof that pictures are worth a thousand words. I spent my time with the Smart Displays asking it to show me restaurants around Las Vegas, requesting YouTube videos to watch and fiddling with a fun little trivia game that should keep parties interesting. These are the sorts of basic requests I throw at Google's Assistant all the time anyway, but the screens really shine in areas you may not expect. Thanks to partnerships with online recipe sources like NY Times Cooking, the Smart Displays offered more nuanced, visual directions as you're trying to prepare some dinner.

More interesting are the ways the Smart Displays tap into existing Google products: video calls over Duo are both super-simple to initiate and worked fairly well despite some lousy Wi-Fi. If you ask the Smart Display for directions somewhere, they'll automatically show up on compatible smartphones. And if you're the sort who has a few Nest cameras around the house, tapping into them through these small screens is a breeze. What remains to be seen is whether -- and how -- third-party developers will work to build experiences for a completely new kind of Google product.

In general, the Smart Displays seem full of promise, even if I'm still not totally sold on the idea of festooning a home with smart displays. Aren't our lives already ruled by plenty of screens as is? Still, if you're already invested in Google's ecosystem, the Lenovo's new screens should slot into your life nicely. The 8-inch model will sell for $199 while the 10-inch model costs $249 -- expect both to be available sometime this summer.

All products recommended by Engadget are selected by our editorial team, independent of our parent company. Some of our stories include affiliate links. If you buy something through one of these links, we may earn an affiliate commission. All prices are correct at the time of publishing.
Lenovo Smart Display hands-on: Google Assistant gets a new kind of home
assistant
ces2018
gear
google
googleassistant
hands-on
internet
lenovo
smartdisplay