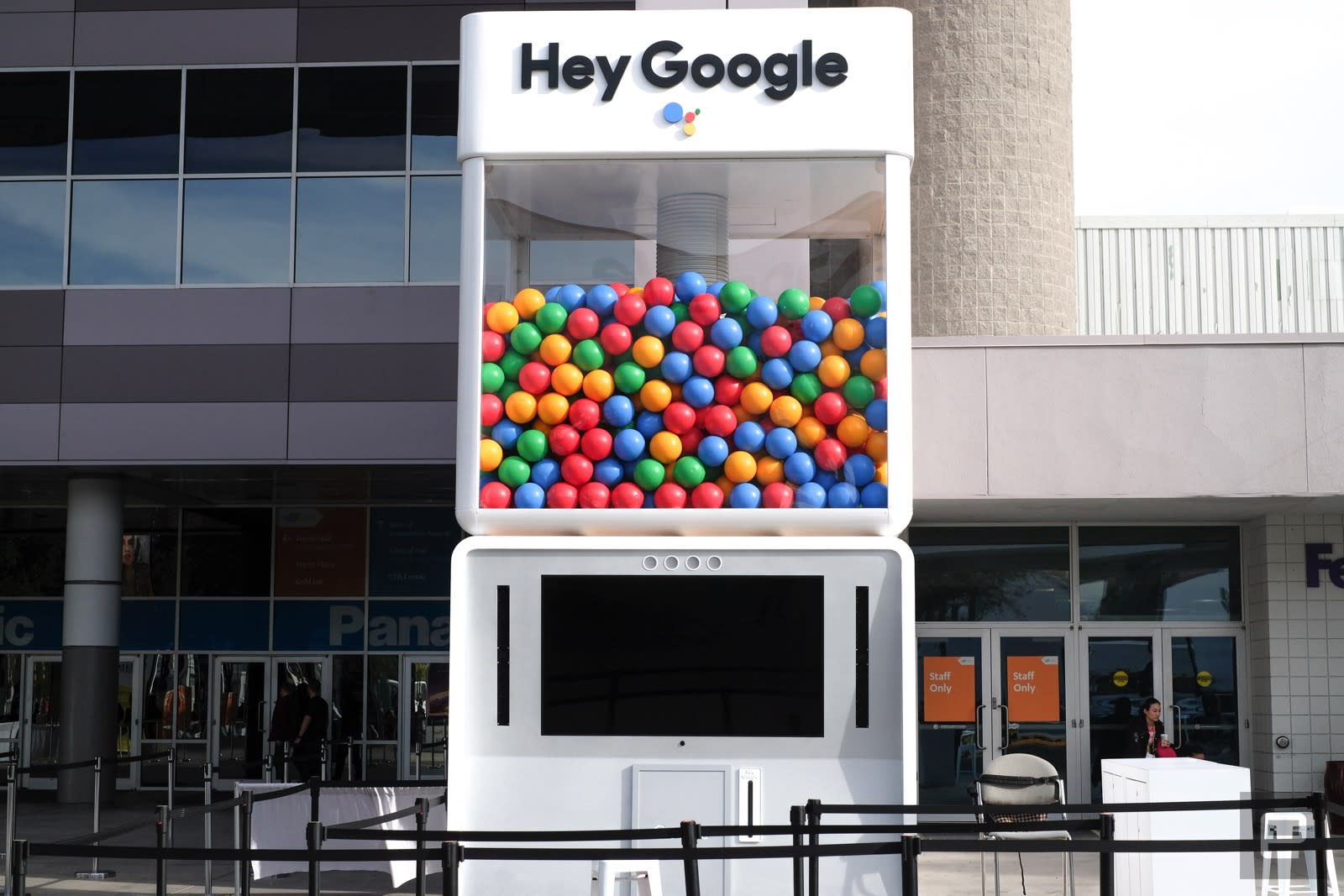 Google is at CES in a big way this year -- no, seriously -- and it's mostly centered around one product: Google Assistant. The search giant is incorporating its personal assistant AI into more devices than ever. They run the gamut from smart speakers (some of which have displays), smart earbuds and yes, even cars. If CES 2017 was the Alexa show, then CES 2018 just might very well be the Google show.

"We think Assistant is more useful if it's available across all devices and contexts," said Scott Huffman, Google's VP of Engineering in charge of Google Assistant. "It's not just phones or speakers or laptops; it's all kinds of things." To that end, Google is focusing on incorporating Assistant in three major categories at CES: the home, the car and mobile -- which, in the case of the latter, means smarter pairs of earbuds.

Perhaps the most notable of the three categories is the home, which is where Google is really giving Amazon a run for its money. A few days ago, it announced that it sold tens of millions of Google Home devices last year, with nearly 6.4 million of them sold in the last quarter alone. Now, at CES, it's expanding its portfolio of partners. According to Google, it's announcing even more Google Assistant-powered speakers from the likes of Altec Lansing, Anker Innovations, Bang & Olufsen, Braven, iHome, JBL, Jensen, LG, Klipsh, Knit Audio, Memorex, RIVA Audio and SoLIS.

Through partnerships with JBL, Lenovo, LG and Sony, Google is entering the smart display category, going right up against Amazon's Echo Show and Echo Spot. That means these devices are more than just smart speakers -- they have touch screens that let you make video calls, look up step-by-step recipes and, of course, watch YouTube videos (which, incidentally, you can't do on any of the Echos).

"[The third-party devices] go through the same rigorous testing that we do on our own devices," said Chris Turkstra, a director for Google Assistant. When asked if he was afraid the third-party devices would cannibalize the sales of Google's own Home and Home Mini products, he said that the goal here is to get more diverse products. "What we want is to create an ecosystem," he said. "Google products will still get features and updates earlier than others, and they'll be able to compete more directly with Amazon's products as well." But, he continued, partner products will offer a far wider variety of hardware than Google alone can offer.

Next up are TVs. Sure, Google Assistant is already on NVIDIA's SHIELD TV as well as Sony's Android TVs, but why stop there? The company announced today that Assistant will roll out to even more Android TVs from the likes of TCL, Skyworth and Xiaomi. More Android TVs from Changhong, Element, Funai, Haier, Hisense and Westinghouse will also debut this week with Google Assistant on board. And, not to be left out, LG will also be rolling out several Assistant-integrated TVs later this year.

As for cars, Google Assistant will be coming to automobiles in the way that makes the most sense: through Android Auto. Yes, Android Auto already has a voice interface, but it was kind of a vanilla experience. With Google Assistant, however, you can do a lot more. In addition to telling you the weather and reading out your text messages, you can also ask Assistant to control your Nest and bring up your playlists on Spotify. Basically, everything you can already do with Assistant on your phone, you will also be able to do with the Android Auto interface in the car.

There are a few caveats of course. The Android Auto interface is designed to reduce distraction, so you won't be able to bring up YouTube videos. You'll also only be able to listen to the scores of last night's game instead of seeing them on the screen.

The third category that Google is focusing on at this year's CES is mobile. Not in terms of phones -- you can already get Google Assistant on Androids and iPhones -- but in terms of headphones. So far the only ones that have it are Google's Pixel Buds as well as Bose's QuietComfort 35 II. But today at CES, Google announced even more Assistant-integrated headphones from companies such as Jaybird, JBL, LG and Sony. In many cases, you trigger the Assistant just by pushing a button on the side of the headphones. From there you can tell it to play your favorite music, read you your appointments for the day, or just anything you'd like Assistant to do.

With all the things that you can do with Google Assistant, it can be a little confusing to know what they are. That's why Google is introducing a new way to talk about them. As teased at last year's I/O, Google will start calling them Actions, in the same way that Alexa calls them "skills." Plus, it's also rolling out a whole new directory of Actions that you can explore on your phone -- there'll now be a blue icon in the corner of the Assistant app that'll lead you to directly to it. What's more, as you use Assistant, the directory will learn to give you suggestions that are tailored to your tastes and interests.

"We really think of Google Assistant as bringing Google's investments into AI," said Huffman. "There's speech recognition, language understanding, even vision. It makes it even more possible to have natural human-like conversation with users."

Google Assistant is already on more than 400 million devices, and in 2018, that number is to escalate even further. "What's driven the growth is all the third-party devices," he continued. "We allow third parties to tap into all the information that Google can provide."

In this article: ces2018, gadgetry, gadgets, gear, google, home, mobile, personal computing, personalcomputing, services
All products recommended by Engadget are selected by our editorial team, independent of our parent company. Some of our stories include affiliate links. If you buy something through one of these links, we may earn an affiliate commission.