Google Pixel Buds review: You (and Google) can do better

They're a $159 experiment that doesn't live up to the hype.

When Google revealed its new Pixels earlier this year, it made a tacit statement: The age of headphone jacks on smartphones is over. So, what's a diehard Google-phone fan to do? Buy Google's new wireless earbuds -- in theory, at least. Several leaks ensured we knew they were coming, but the Pixel Buds were still a surprise because they emphasized functionality over convenience. Obviously, you can listen to music with them, but you can also sift through notifications and translate languages on the fly. Still, despite lots of potential, Google's Pixel Buds just don't live up to the hype. 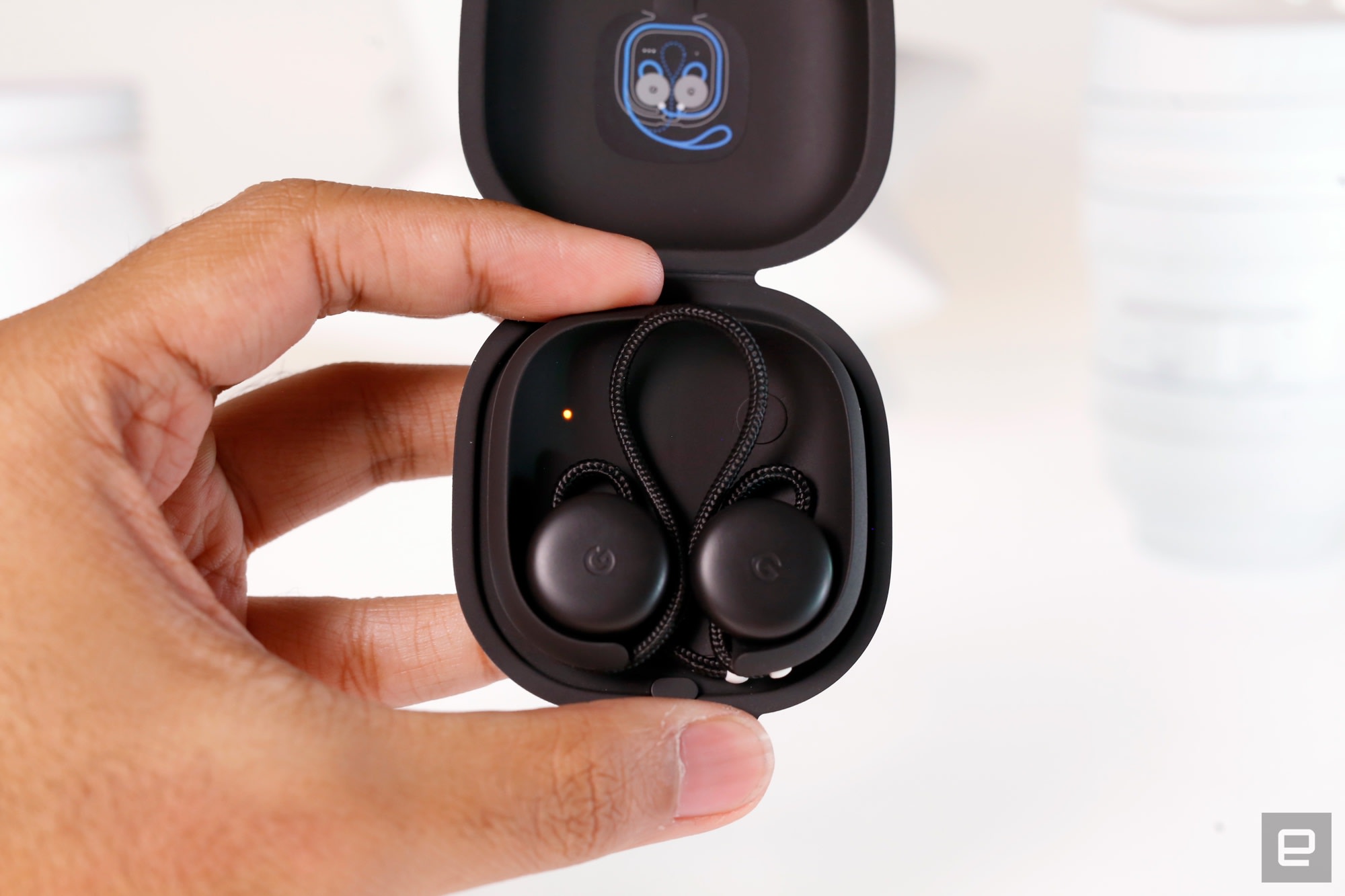 Assuming you've got an Android device running Nougat or newer, the setup process couldn't be easier: Open the case next to a compatible phone, and you'll get a pop-up that walks you through the process. Keep in mind, though, that this dead-simple pairing works only with the first phone you set it up with; otherwise, you have to press and hold a button inside the case to put the Pixel Buds into pairing mode. From there, you pop into the Bluetooth settings and pair them the old-fashioned way. This is also the setup process you'll use if you want to use the Pixel Buds with an iPhone. It would've been nice if the Pixel Buds paired as seamlessly with the second or third device as they do with the first, but really, that's the least of the problems here. 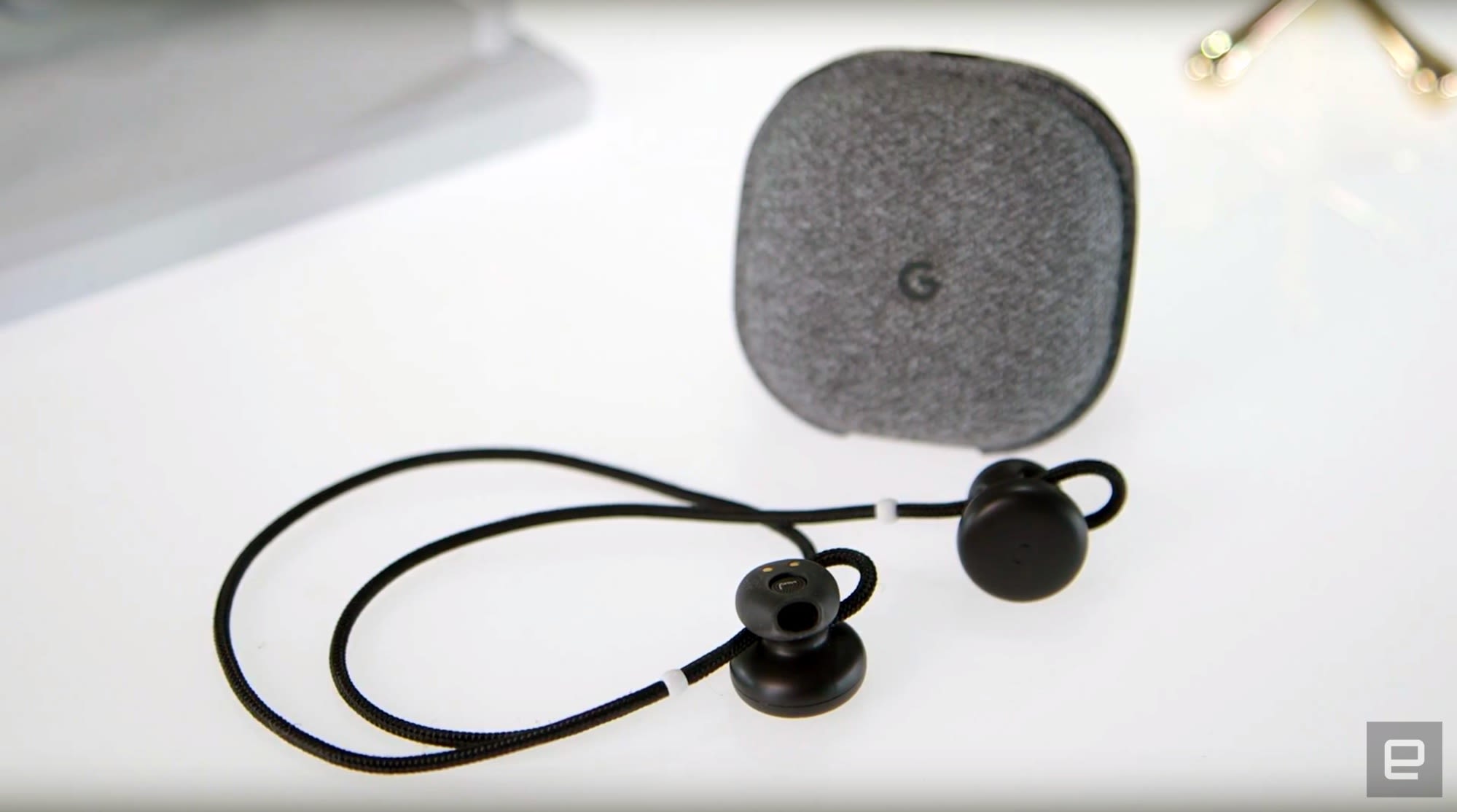 Each Pixel Bud has two distinct sections: the part that sticks in your ear and the tiny bulb that sits outside it. Because of the way these two parts are connected, the Pixel Buds ultimately rest right on the edges of your ears -- it took me a few days before I could plop the Buds into the sweet spot without any extra fiddling. The bulbs are admittedly a little odd-looking, but they're still more subtle than, say, Apple's AirPods.

The Buds are connected by a nylon cord. I know; I'm not a fan either. While a fully wireless design might have looked better, the cord dangles around your neck unobtrusively and makes the Buds harder to lose. (Unless you're me — I once draped them around my neck and forgot they were there for an entire day.) Chances are you'll barely notice the cord while you're wearing these.

You'll definitely notice it when it's time to charge the Buds in their cloth-covered case. Google's preferred method involves popping the Buds into their respective nooks, wrapping the length of the cord around an inner column and shoving the remainder into the space where the Buds sit. I joked on Twitter last week that I'd never remember how to do it, but it's much easier than my glibness let on.

That doesn't mean it's not annoying. If the cord isn't snugly wrapped, it could prevent the case from closing properly. That doesn't keep the Buds from charging, but it does mean the case is prone to pop open accidentally — that already happened in my backpack once, and by the time I got where I was going, the Buds had worked their way free of the case entirely. You're also meant to make tiny loops by pulling the nylon cord near the buds to make sure they anchor sturdily in your ears. I did, but that ultimately made no difference -- the Pixel Buds stayed put in my ears during runs regardless of whether I made those loops. Your mileage will vary, though: I've let a few other people try the Buds, and the loops didn't prevent them from falling out of place. 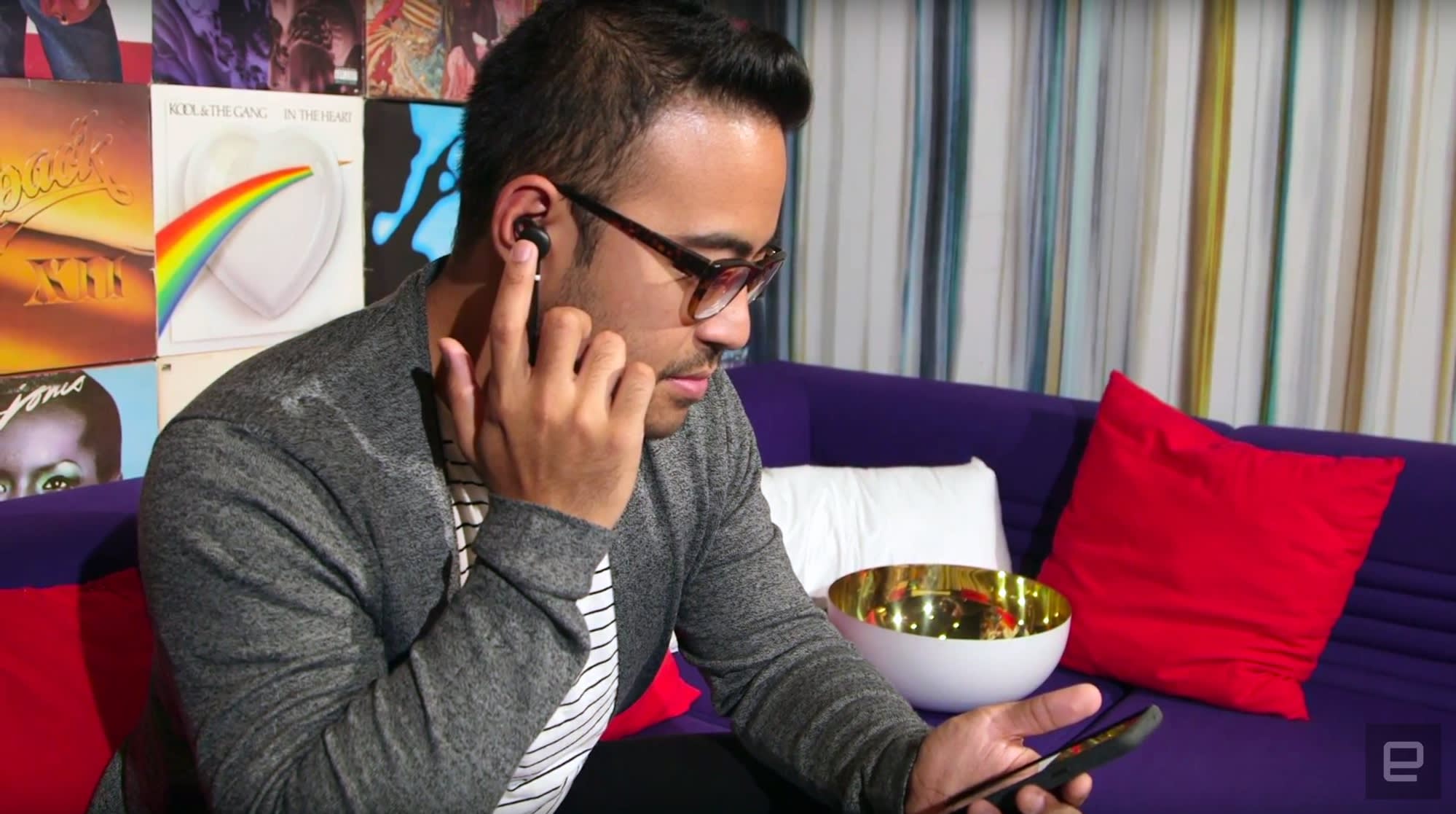 Personally, I prefer in-ears that sit snugly in the ear canal. They just sound better. That said, I was pleasantly surprised with Google's first-generation earbuds. You'll notice more definition with wired in-ears, but the Pixel Buds produced loud, clear audio with more oomph than Apple's AirPods. My test tracks ran the gamut from EDM to jazz to lots of weird Japanese stuff, and just about all of it came through with a surprising sense of substance. If you like a lot of bass in your music, though, the Pixel Buds will probably leave you wanting. For people who really care about audio quality, there are much better ways to spend $160. Still, for a set of nearly wireless earbuds, the Buds sound pretty good.

Unfortunately, you're going to hear a whole lot more than just your music. Because the Pixels Buds sit right on the edge of your ear, you're going to notice a lot of ambient sound leaking in unless you have the volume cranked up. That's not necessarily a bad thing. If you're a city dweller who often has to navigate busy streets and intersections, the Pixel Buds still allow you to hear oncoming traffic. Of course, if you're toiling away in a noisy office, the Pixel Buds do nothing to block out the sound of raucous conversations around you. If you're like me and need to shut out the world to get work done, the Pixel Buds will disappoint.

When it's time to actually interact with the Pixel Buds, you'll need to reach for your right ear. A quick tap on the touch-sensitive right bud plays or pauses whatever you're listening to, and swipes forward and back along the surface raise and lower the volume, respectively. Compared to the limited controls on Apple's AirPods, the Pixel Buds' are considerably more nuanced — the AirPods can play/pause and skip tracks with a double-tap, but not both; you have to jump into settings to change what that action does. The Pixel Buds let you do it all, and with surprising competence; because each gesture is so different, I never accidentally turned up the volume when I meant to listen to my notifications or pause a song. 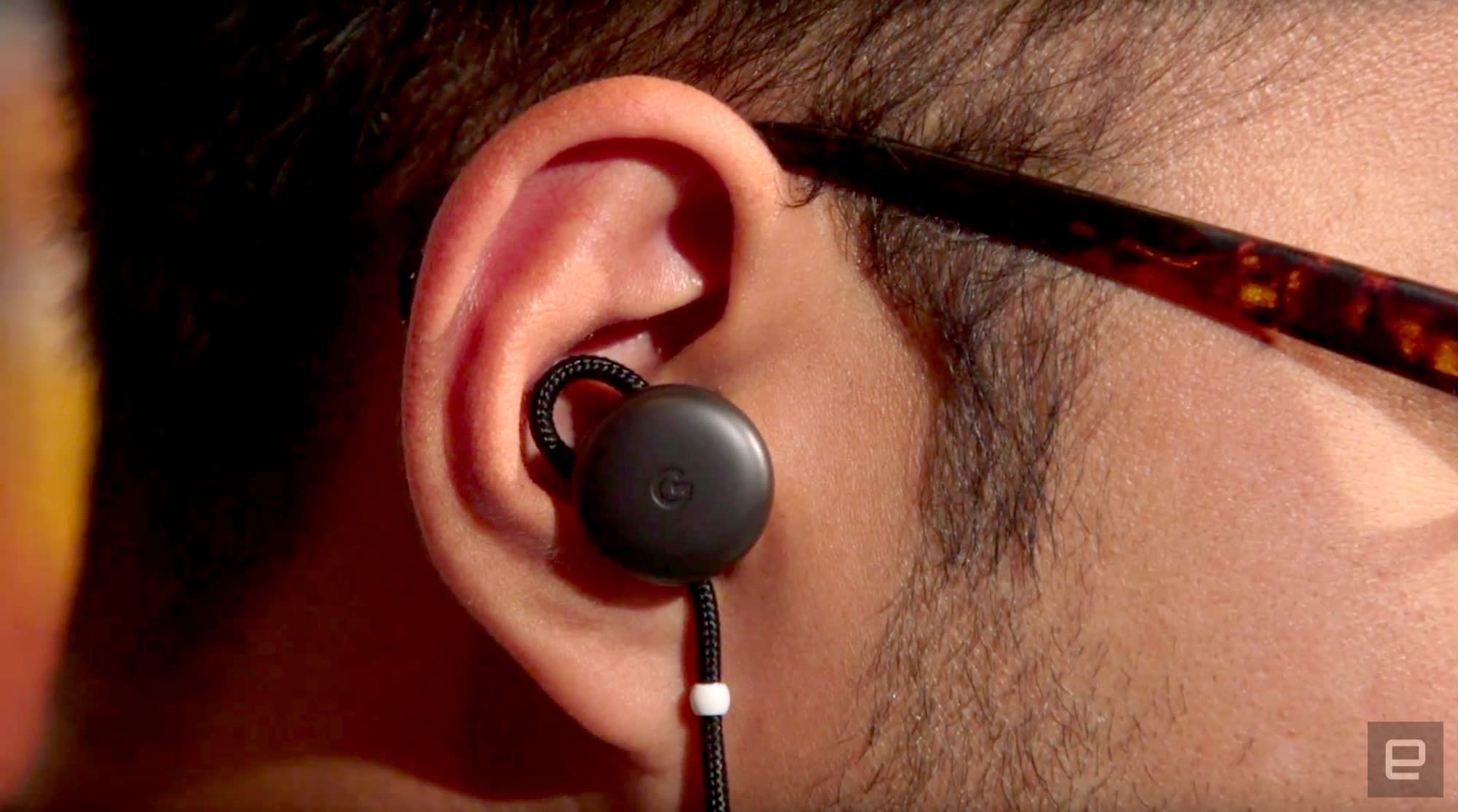 The problem is, the touch surface is easy to accidentally activate, especially when the Buds are dangling around your neck. I burned through the Pixel Buds' batteries twice because my neck had un-paused Spotify without me noticing, leaving me screwed for the commute home. The fact that this happened twice is surprising if only because of the Buds' battery life — in general, they last between four to five hours on a charge,

Of course, the Pixel Buds mainly exist as a vessel for Google's Assistant. You access it by saying -- what else? -- "OK, Google" or by holding your finger against the right earbud, but the tell-tale Assistant bloop only happens when you do the former. It should really happen when you press the earbud, too, if only to make absolutely clear when the Assistant has actually started listening for a command.

Once you get the hang of things, the experience of talking to Google Assistant through the buds is mostly identical to using it on your phone or through a Google Home. That's often a good thing, but I wish Google had done a little more to tune Assistant for wearable use. When I ask it to play a certain song, for instance, Assistant only does so after telling me the name, the artist and the service it's playing on. Uh, maybe just play the damn track, Google.

Sometimes, Google Assistant appears to listen to what I'm saying and then fails to do anything about it. These weren't arcane commands, either — I asked the Assistant to play a song or playlist I had requested multiple times before, and it just hung. This was such a pervasive issue that I sent my first review unit back to Google on the suspicion that it was defective. The replacements I received didn't exhibit the same problem quite as often, but it still happened once or twice. My network connection was strong, and I make it a point to speak extra clearly to virtual assistants, so I can't really explain what's causing these failures. 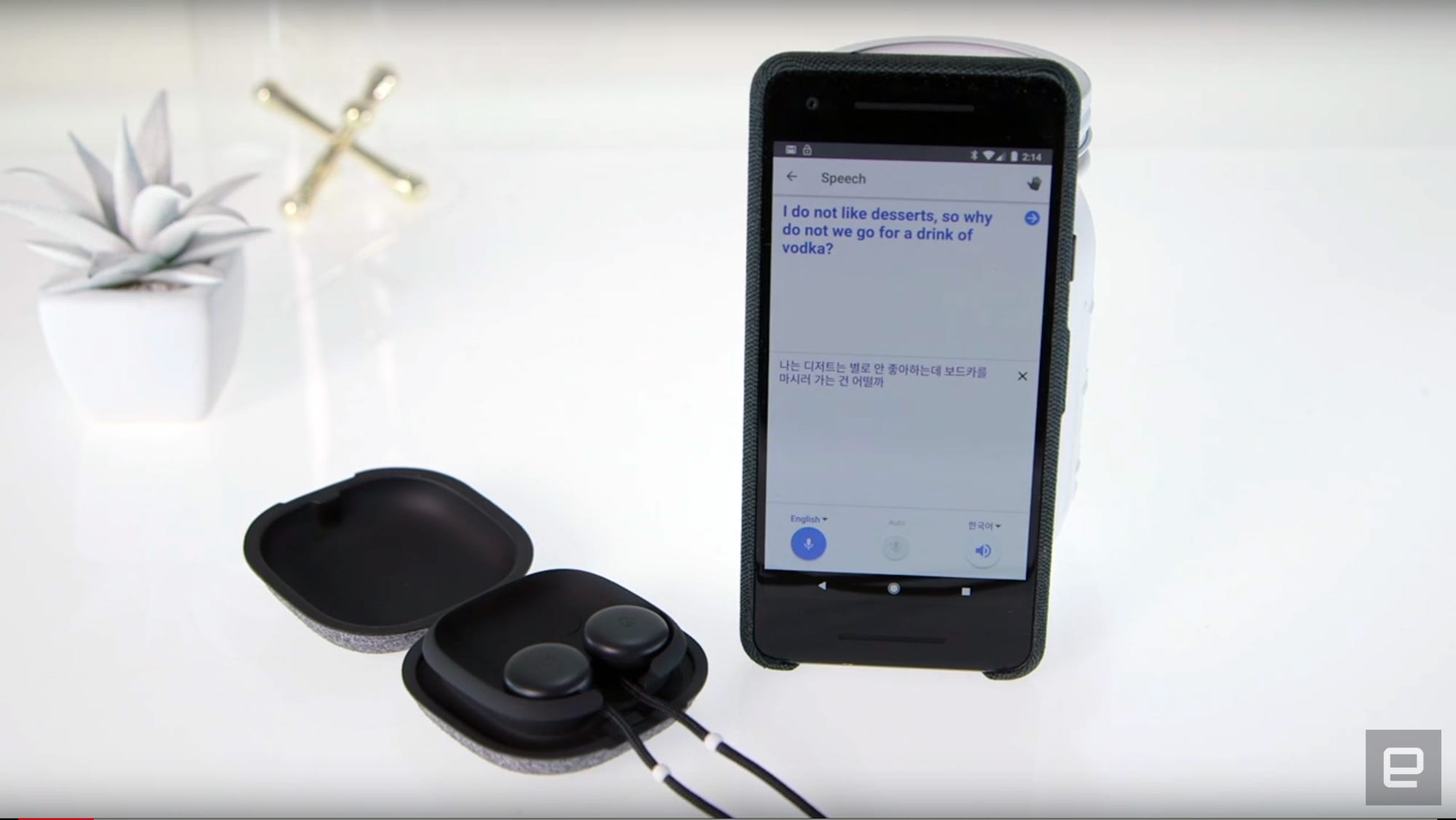 You can use the Pixel Buds as in-ear translators, too -- a use case Google specifically highlighted at its most recent launch event last month. The idea of having an in-ear translator (like an inorganic Babel fish) is a compelling one, but in practice, we're still a ways off from seamless cross-language conversations. To get started, Google suggests you say things like "I need a [language] translator" to launch the Google Translate app in the correct mode. Fair enough, but on a few occasions, the buds just spit a snippet of a foreign language into my ears when given that command. Weird.

When Translate does launch normally, you lay a finger on the right bud and start talking. Your words then get rendered into one of 40 target languages, and the native speaker listening holds down a button on the Pixel to start responding. The translation process itself typically happened in mere moments, but this really boils down to the strength of your network connection. When I tried using the feature where AT&T coverage was sort of lousy, it took a few extra seconds to get the spoken translation. Responses rendered in your language get routed right into your ears, but for such exchanges to work best, you'd have to hand over your phone so the other person can hold down the button and respond when appropriate. Depending on where you are, that might not be such a great idea.

And, of course, because Google Translate is doing the cross-cultural heavy lifting, expect a few misfires here and there. Engadget's video producer, Brian Oh, is a native Korean speaker, and for every mostly accurate translation I ran by him, there was one that just made him roll his eyes. Ditto for the handful of Vietnamese friends I tested the feature with. As always, Google Translate is super-literal about what you say, so the idioms that pepper our daily conversations rarely make sense when rendered in another language. If you were planning to rely on the Pixel Buds in some far-flung locale, it's probably best to keep your utterances succinct. 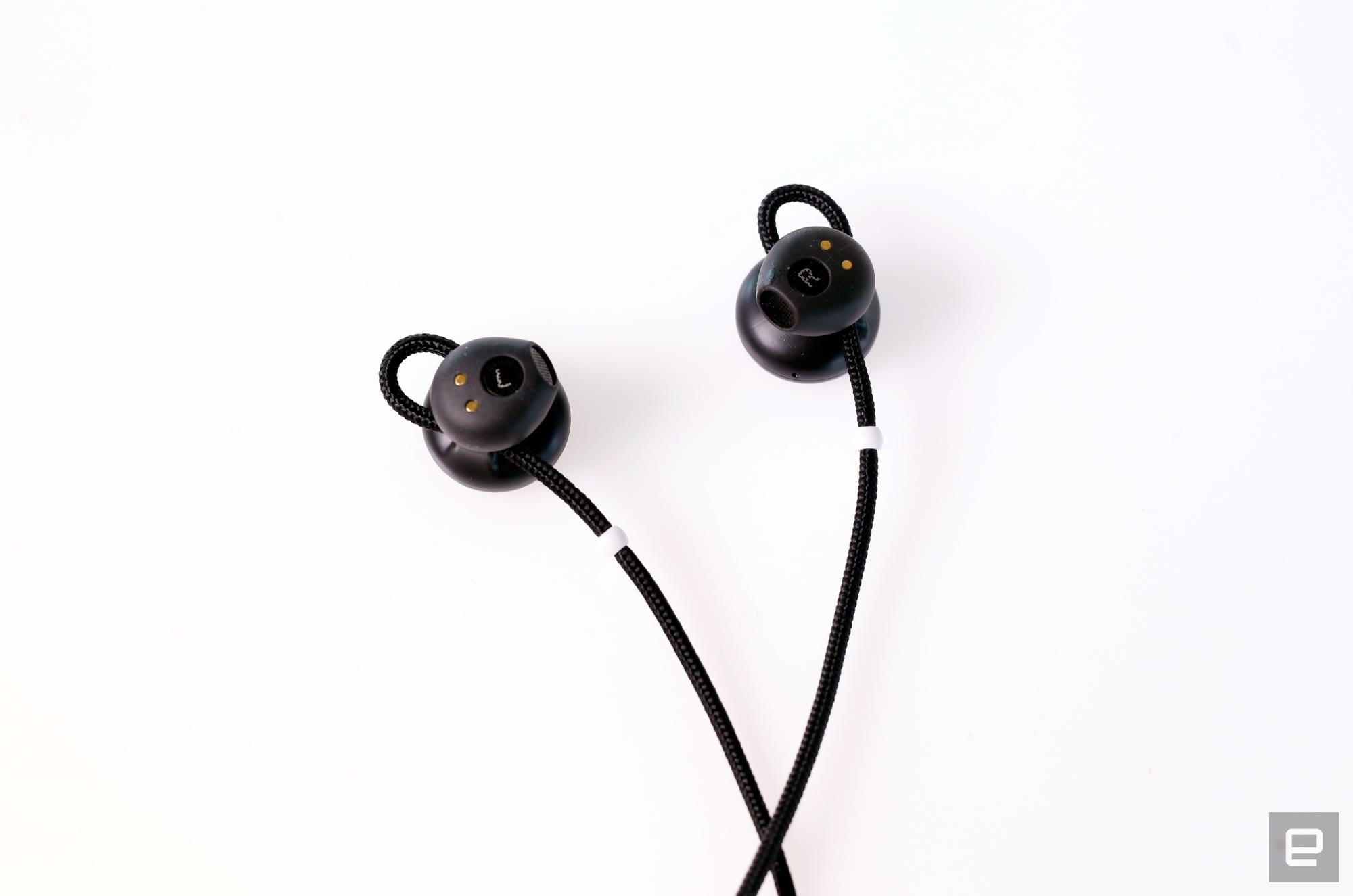 I'm not entirely sure why Google released the Pixel Buds in their current form. At best, they're decent; at worst, they feel unfinished. The concept certainly has promise, and I appreciate that Google wanted the Pixel Buds to be feature-rich compared to its most notable rival. Ultimately though, it feels like Google was more concerned with getting these things out the door (and maybe making a few bucks over the holidays) than giving them the polish necessary to be truly valuable. It's possible that Google will iron out some of these issues over time with software updates, and if that's the case, we'll update this review. Until then, though, you can do better.