Last CES, Dell unveiled its first XPS convertible -- the XPS 13 2-in-1. This year, the company is expanding its hybrid lineup. In addition to being the first convertible of its size for the series, the new XPS 15 2-in-1 is also one of the first laptops to pack Intel's Core processor with Radeon graphics. That chipset was teased in November, and incorporates an AMD Radeon GPU with dedicated RAM and Intel's CPU, allowing for smaller motherboards and thinner devices overall.

Indeed, the XPS 15 2-in-1 is slimmer than its 15-inch competition -- its 16mm profile is thinner than devices from HP, Lenovo and ASUS. Since it's just 1mm less than the clamshell XPS 15, the new hybrid didn't strike me as noticeably skinnier than before, but it's still a pleasant device to hold and behold.

Dell managed to whittle away at the profile not only because of the space gained from Intel's new chipset, but also because the XPS 15 2-in-1 has a maglev (magnetic levitation) keyboard. The setup uses opposing magnets instead of switches or membranes to push buttons back up and makes for very thin keyboard designs. When I tried it out, I found the experience similar to using the butterfly keyboard on my Macbook. Both systems provide satisfyingly "clicky" response despite having close to no travel, although Dell's version offers slightly more depth. 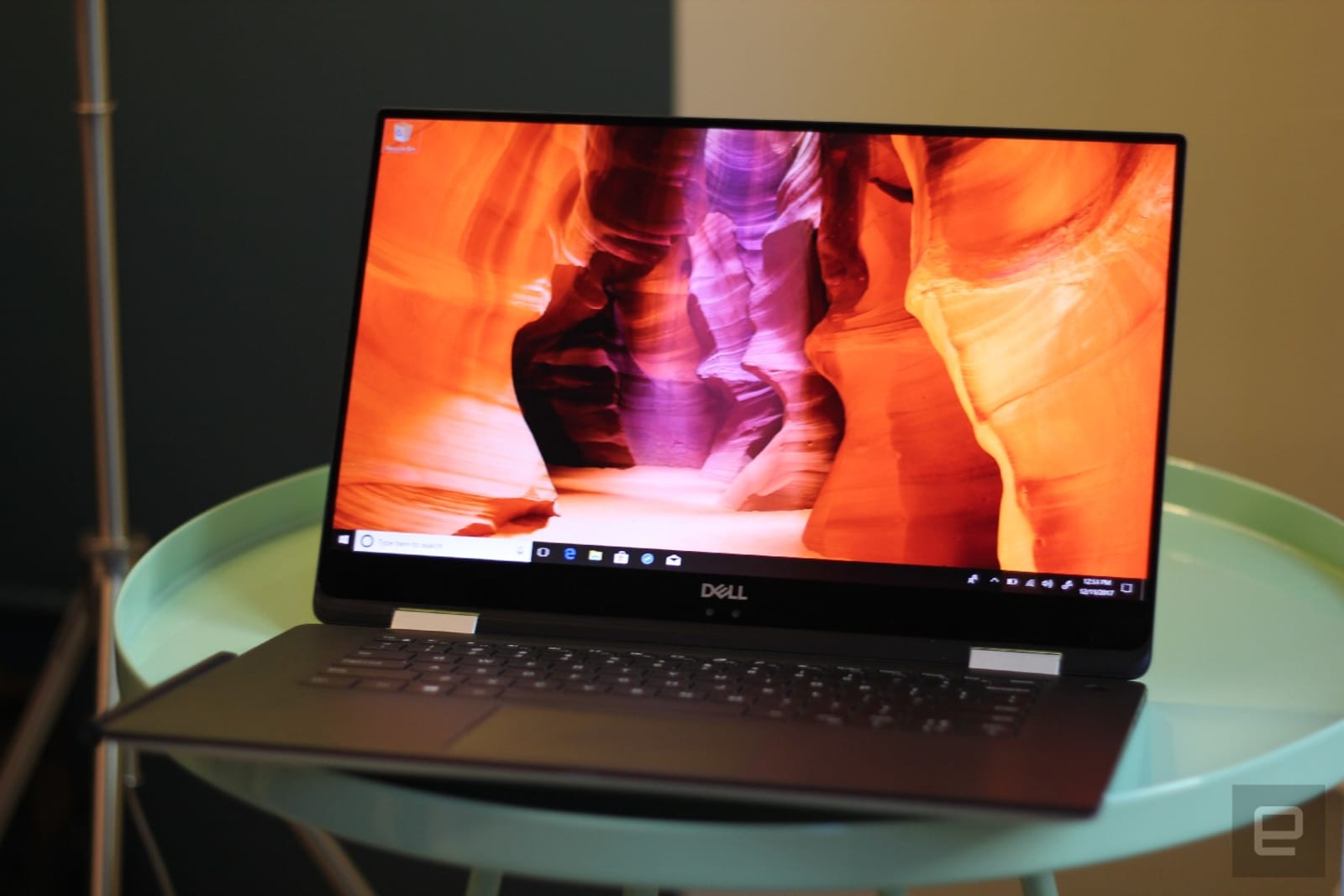 It's a feeling you'll probably get used to over time, and it didn't affect the accuracy of my typing. Traditionalists who dislike shallower keyboards like this may want to consider the clamshell version or the smaller XPS 13, which got a makeover this year. Speaking of, like the XPS 13, Dell's new convertible also uses Gore Thermal insulation around the CPU to keep the system cool.

In addition to slimmer profiles, the Intel processor is supposed to provide graphics prowess that's comparable to systems with discrete GPUs. Dell said that the chipset delivers performance similar to NVIDIA's mobile 1050 card. I didn't get to run my own tests at my demo, but the videos that Dell was playing did appear smooth.

The XPS 15 convertible also comes with the "InfinityEdge" display that's been a hallmark of the series since the first XPS. Like the clamshell, the new 2-in-1 goes up to 4K for its screen resolution, and now supports 100 percent of the Adobe RGB color spectrum. It also features Dell Cinema tech that enables things like HDR playback, surround sound and prioritizing video streaming to prevent lag. 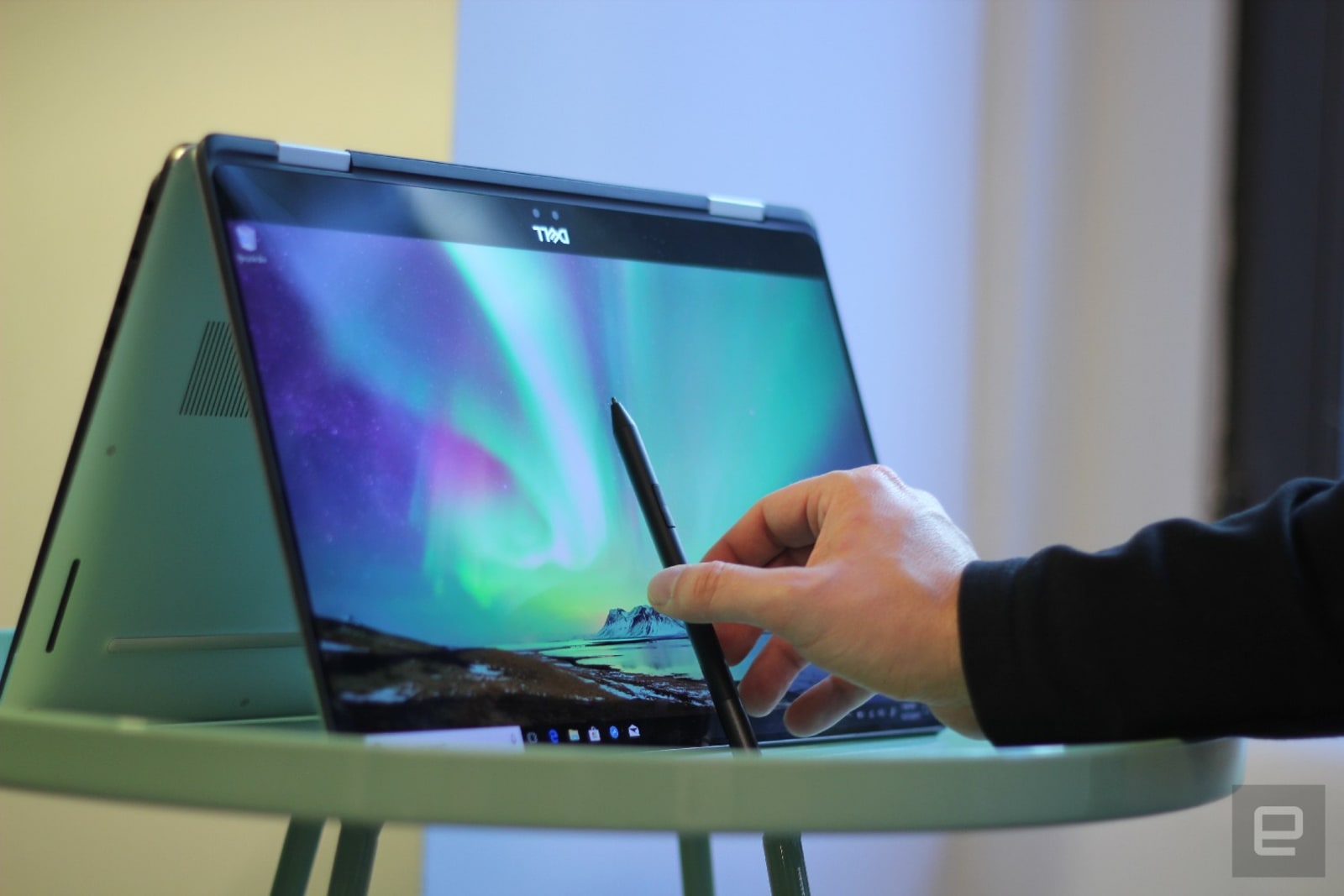 I liked the XPS 15 2-in-1's display -- images looked vibrant and crisp during my hands-on. The narrow bezels also added to its appeal, making the screen look more visually arresting. You can also draw on the display with Dell's Active Pen, which supports up to 4,096 levels of pressure sensitivity as well as tilt detection. The stylus was responsive when I briefly tried it out, although I didn't test it enough to see if the tilt support allows for more nuanced shading.

The XPS 15 2-in-1 will be available in spring, starting at $1,300. While it's not entirely a surprise to see a larger sequel to last year's 13-inch XPS hybrid, it's certainly refreshing to see Dell offer more than just incremental upgrades. The 15-inch convertible category has strong competition from HP, Lenovo and ASUS, but by the looks of it, the new XPS 15 could very well hold its own.

All products recommended by Engadget are selected by our editorial team, independent of our parent company. Some of our stories include affiliate links. If you buy something through one of these links, we may earn an affiliate commission. All prices are correct at the time of publishing.
Dell XPS 15 2-in-1 hands-on: A sleek showcase of firsts
ces2018
convertible
dell
DellXps
DellXps15
dellxps152in1
gadgetry
gadgets
gear
laptops
personal computing
personalcomputing