They'll lead to thinner and lighter laptops that can actually play games.

The fruits of Intel and AMD's unprecedented partnership are finally here. Intel just unveiled its 8th generation Core CPUs with AMD's RX Vega M, bringing together its fastest mobile processors with graphics capabilities that used to required a dedicated GPU. Together, they'll lead to thinner and lighter laptops with decent gaming chops. While we got an overview of the chips back in November, we finally have more details at CES. And, simply put, gamers should be pleased.

Fittingly, Intel is plugging AMD's RX Vega M module into the first batch of its high-powered "H-series" 8th generation Core chips. These are the processors that are typically paired with dedicated GPUs, like NVIDIA's GTX 10-series line. Now, for the first time, Intel has a custom all-in-one solution.

Intel is offering two variants of AMD's graphics: RX Vega M GL, which is meant for laptops, and GH, which is targeted at small desktop-like devices, such as Intel's new NUC. Naturally, the GL variant has a lower clock speed and less graphics hardware than its more powerful sibling. It runs between 931MHz and 1,011MHz and has 20 compute units, while the GH clocks between 1,063MHz and 1,190MHz has 26 compute units. You'll find the GL variant bundled with Intel's new 8th generation Core i5 and i7 processors, while the GH will only come with an i7. 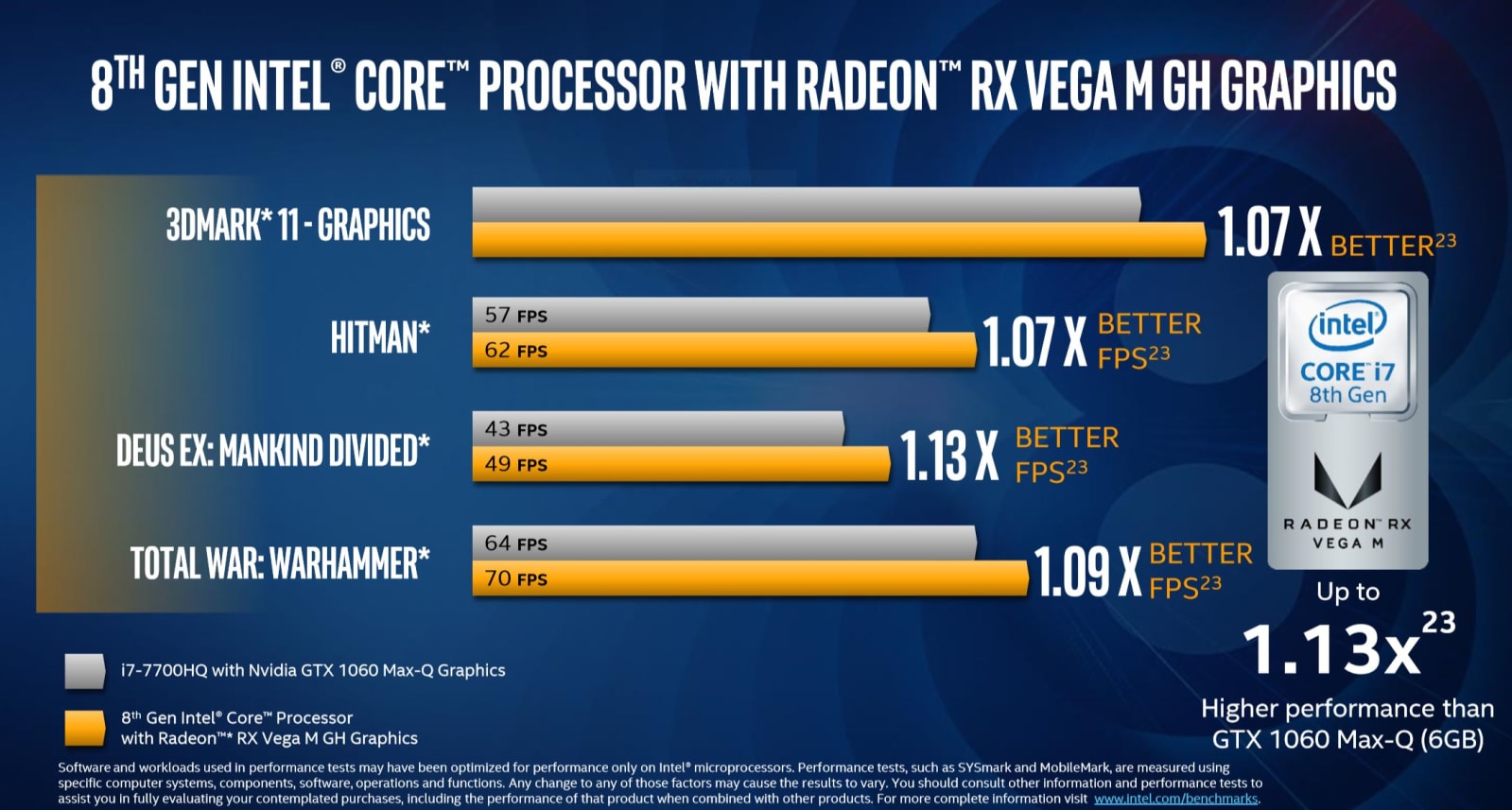 In laptops with the RX Vega M GL module, you can expect speeds around 1.4x faster than NVIDIA's GTX 1050 while playing Hitman. And with the speedier GH graphics, you'll see performance up to 10 percent faster than NVIDIA's GTX 1060 running on a machine with a 7th generation Core CPU. That basically ensures that, in most modern games, you'll see a smooth 60 frames per second in 1080p with high graphical settings. Those figures would be admirable from larger dedicated GPUs. For something bundled together with a traditional CPU, they're honestly astonishing. 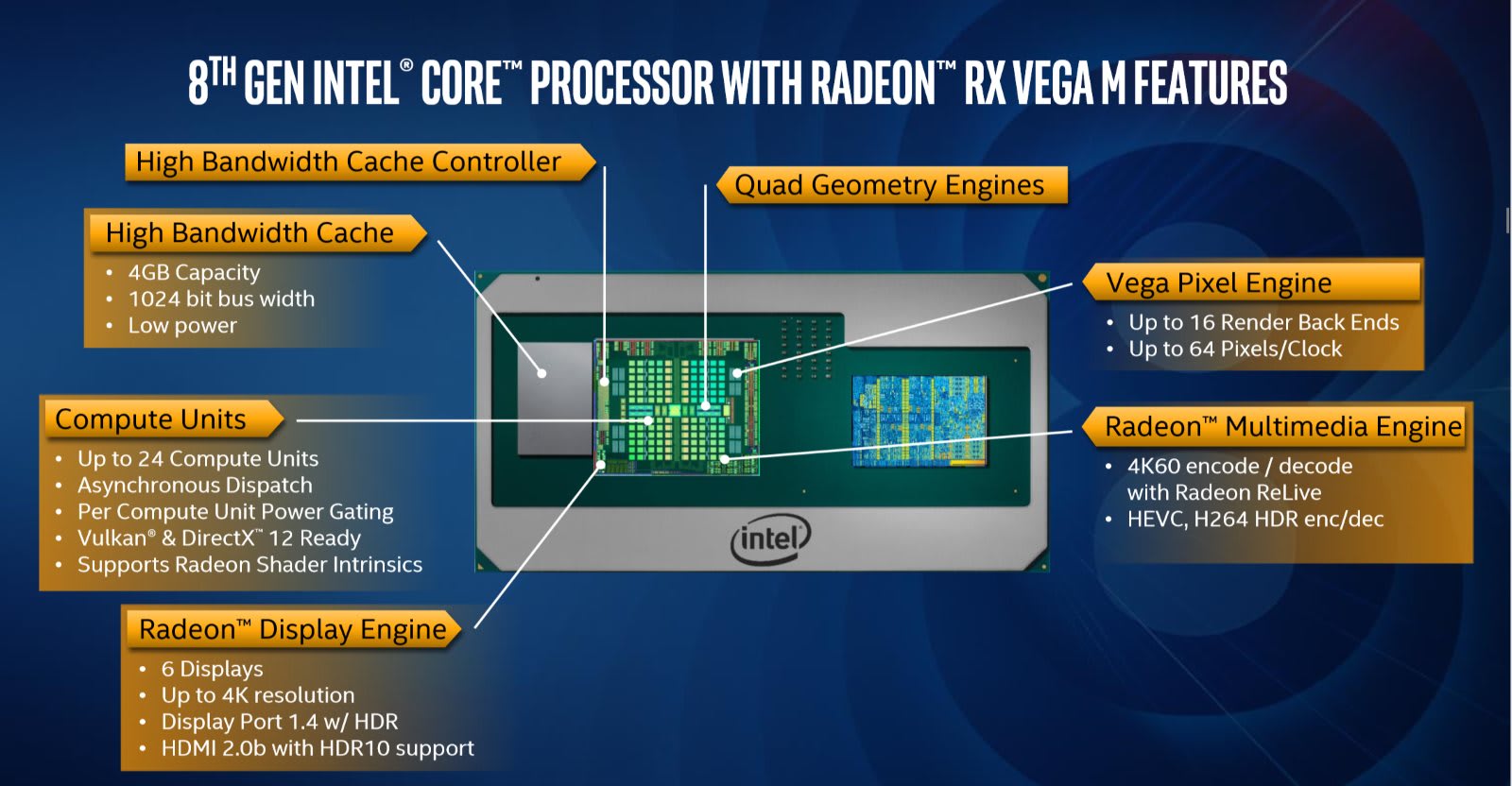 Intel crafted a unique custom chip to fit in the RX Vega M. It's wider than the company's typical designs, because it fits in both the 8th generation Core processor, AMD's graphics and it makes room for 4GB of HBM2 (High Bandwidth Memory Gen 2). In particular, Intel focused heavily on the EMIB (Embedded Multi-Die Interconnected Bridge) between the memory modules and RX Vega M. It's a high-speed method of connecting different types of chips on the same die, ensuring that there won't be any memory bottlenecks for the GPU. Additionally, Intel is using eight lanes of PCI-Express Gen 3 to connect the GPU to its CPU.

As for the processor portion of these new chips, you'll find them running from 2.8GHz to 3.8GHz with the i5-8305G, all the way up to a speedy range of 3.1GHz to 4.2GHz with the top of the line i7-8809G. They each offer four cores with eight computing threads. Surprisingly enough, you'll also be able to overclock their CPUs, GPUs and memory modules. And just in case you were wondering, you'll still find Intel's HD 630 graphics integrated into the CPU. It'll serve as an efficient way to drive your display when you don't need AMD's 3D hardware.

Since these chips are running AMD GPUs, they'll also support the company's Radeon Adrenalin Edition software and take advantage of features like FreeSync for smoothing out game performance, and ReLive for capturing your sessions. You'll be able to use both Intel's XTU app and Radeon WattMan to manage overclocking. Intel also promises that it'll offer launch-day drivers for new titles at its new gaming site. You'll be able to find Intel's chips with RX Vega M graphics in upcoming laptops from Dell and HP, as well as the company's new NUC when it launches this spring.

Yes, it's still very strange that this partnership exists. It's an admission by Intel that it needs some serious help with high-end graphics. In the short term, this is a quick fix. But it's no surprise that Intel also stole away AMD's former graphics head, Raja Koduri, who was responsible for the Vega GPU's design. It'll likely take a few years, but you can fully expect Intel to replace this "frenemy" solution with its own chip down the line. For now, though, it's something AMD can use to market its superior graphics, while still competing with Intel in the processor market.