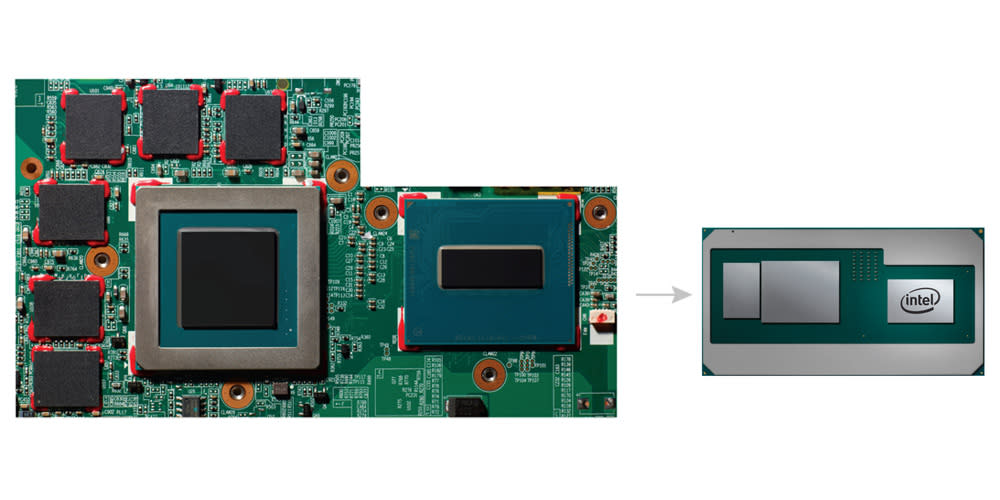 Intel may have unveiled its latest Core CPUs for mainstream laptops, but the company has something more advanced up its sleeves for what it calls its "enthusiast" customers. The new chip will be part of the 8th-generation Core H series of processors, and comes with discrete-level graphics cards built in, as well as its own RAM. Having all this built into the processor frees up space for other components inside a laptop, so device manufacturers can squeeze in things like larger batteries or more optimal fan designs. Intel is not sharing performance details for the new CPUs yet, but it's promising power that will be good enough for gamers or content creators who often run taxing programs like Adobe Photoshop and Lightroom.

Specifically, the new processor integrates a "semi-custom" AMD graphics chip and the second generation of Intel's "High Bandwidth Memory (HBM2)", which is comparable to GDDR 5 in a traditional laptop. The three typically distinct components are able to coexist on one chip because of Intel's Embedded Multi-Die Interconnect Bridge (EMIB), which "allows heterogeneous silicon to quickly pass information in extremely close proximity." The company also came up with a power-sharing framework that lets the GPU manage each component's temperature, performance and energy use.

This infrastructure should free up about three square inches of board space that could either be used for other components as described above, or make for thinner laptops altogether. The idea is that powerful laptops for gamers no longer have to be chunky beasts.

The new Core H processor is the first consumer product to use EMIB, and will be released in the first quarter of 2018, and many laptop makers are expected to offer products powered by the chip. This is a pretty significant development that not only benefits the enthusiast audience, but could also have trickle down effects that could improve mainstream laptops (and even other devices) in the future.

In this article: amd, cpu, gadgetry, gadgets, gear, gpu, intel, intelcoreh, personal computing, personalcomputing
All products recommended by Engadget are selected by our editorial team, independent of our parent company. Some of our stories include affiliate links. If you buy something through one of these links, we may earn an affiliate commission.