Shortly after 11 AM, the power went out in the central hall of the Las Vegas Convention Center (LVCC), bringing CES to a near standstill. The cavernous hall, measuring more than 632,000 square feet -- bigger than some aircraft hangars -- fell into silence, save for the backbeat of a few battery-powered speakers. A Tesla, parked with its doors open and headlights on, provided one of the few sources of light in an otherwise pitch-black hall.

Security acted quickly to move people out, forming a human wall across the entrances, preventing visitors from coming in. There was the odd scuffle, especially as international attendees and security guards failed to understand one another. The mood on the edges of the hall was tense as people struggled to understand what exactly was going on, but nobody had a clue.

Through its official CES Twitter account, the CTA announced that it was aware of the "isolated power outage" at the LVCC. It added that it was working hard to resolve the matter and that it appreciated attendees' patience, and the first tweeted response was shortly, "Honestly, don't rush."

As the hall began to empty out, only the booth attendees, security personnel and the executives that were manning each stage remained. An aura of calm settled across the hall as people realized that they would be waiting for a long while. Those employed to represent a brand, with little investment in its overall success, sat on the carpet and checked their phones. The people further up the chain prowled the floor, annoyed with the interruption.

While we work through this isolated power outage feel free to visit our exhibitors in South Hall and North Hall. Also get outside on this beautiful Las Vegas day and check out Central and South Plaza. #CES2018

"It's 'cos they got too much shit plugged in, in there," said a security guard when asked about the ongoing crisis.

"I like it," said Tiffany Sawcznko, who was representing Polaroid at the show. "It's easier on the eye." "It's weird," said one Monster employee. "Some heads are gonna roll." Another added, "Are we gonna get our money back?"

The issue of money was a sore spot for one company executive, who asked not to be named, pointing out that the power cut would prove costly. "It's gonna cost thousands of dollars," they explained, "when you take into account booth space, employee time, all of the lost meetings." They jabbed at their smartphone. "You can literally see this shit running up on a clock."

Nicole Brandfon, a public relations executive, was initially nonplussed, saying that she was "shooting an interview video when the lights went out." She was expecting them to "come straight back on." Unfortunately, they did not.

Some booths remained running, and companies like Canon, Nikon, Samsung and Casio apparently had backup generators on-site. According to bystanders, Casio and Nikon apparently decided to shut their power down, since there were no prospective customers to entertain. "I've been here 27 years and I've never had this happen before," said Ed Hunter, who was working at the Samsung booth. He seemed unfazed by all the commotion.

One person, who declined to be named for this report, said he would be happy if the outage didn't last longer than an hour -- which it did. He said that it would cause "untold damage" to his business if he wasn't able to make his scheduled meetings.

At 12:38 PM PST, the CTA announced that power would soon be restored to the building but that public access would be restricted until further notice.

We've been informed by Nevada Power that the outage has been addressed and they are in the process of restoring power. We will continue to restrict access until full power has been restored. Thank you for your continued patience. We encourage you to visit other open show areas

808 Audio managed to get some unintentional good press out of the outage, since its DJ booth, which used battery-powered Encore speakers, remained in operation. The company's Derek Jensen said that "going to CES is like going to the moon," and pointed out how many redundancies the company brings to ensure things run smoothly. He shrugged his shoulders and gestured around, the implication clear.

Outside the building, a thick fog of cigarette smoke loomed over the crowd still waiting to return inside as terse security guards shoved back anyone who got too close. 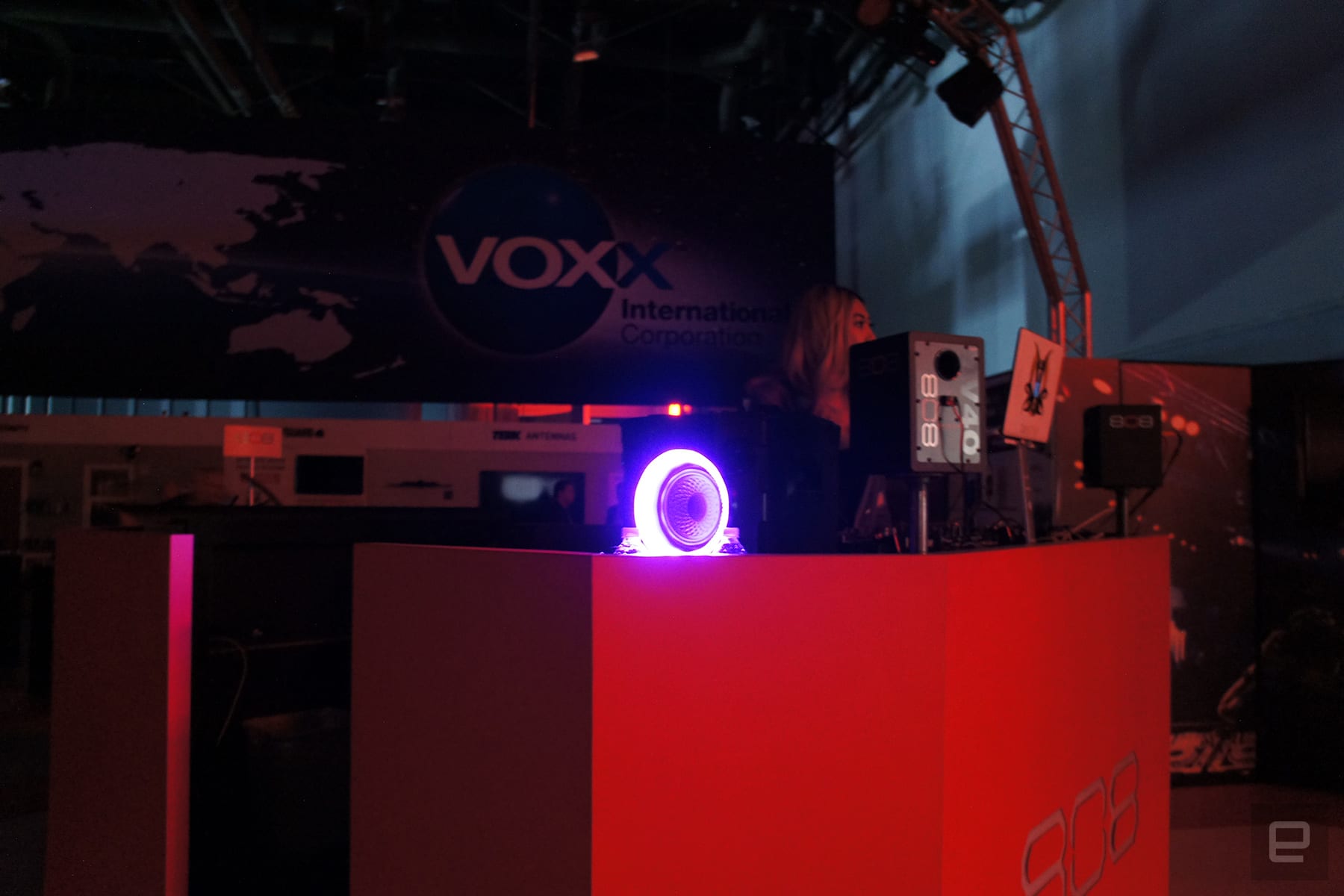 A Bluetooth speaker soldiers on. A security guard remonstrates with a Spanish blogger covering the blackout. Reverie's booth demonstration was probably made more effective by the blackout. This pair of attendees was striking a deal in the darkness. 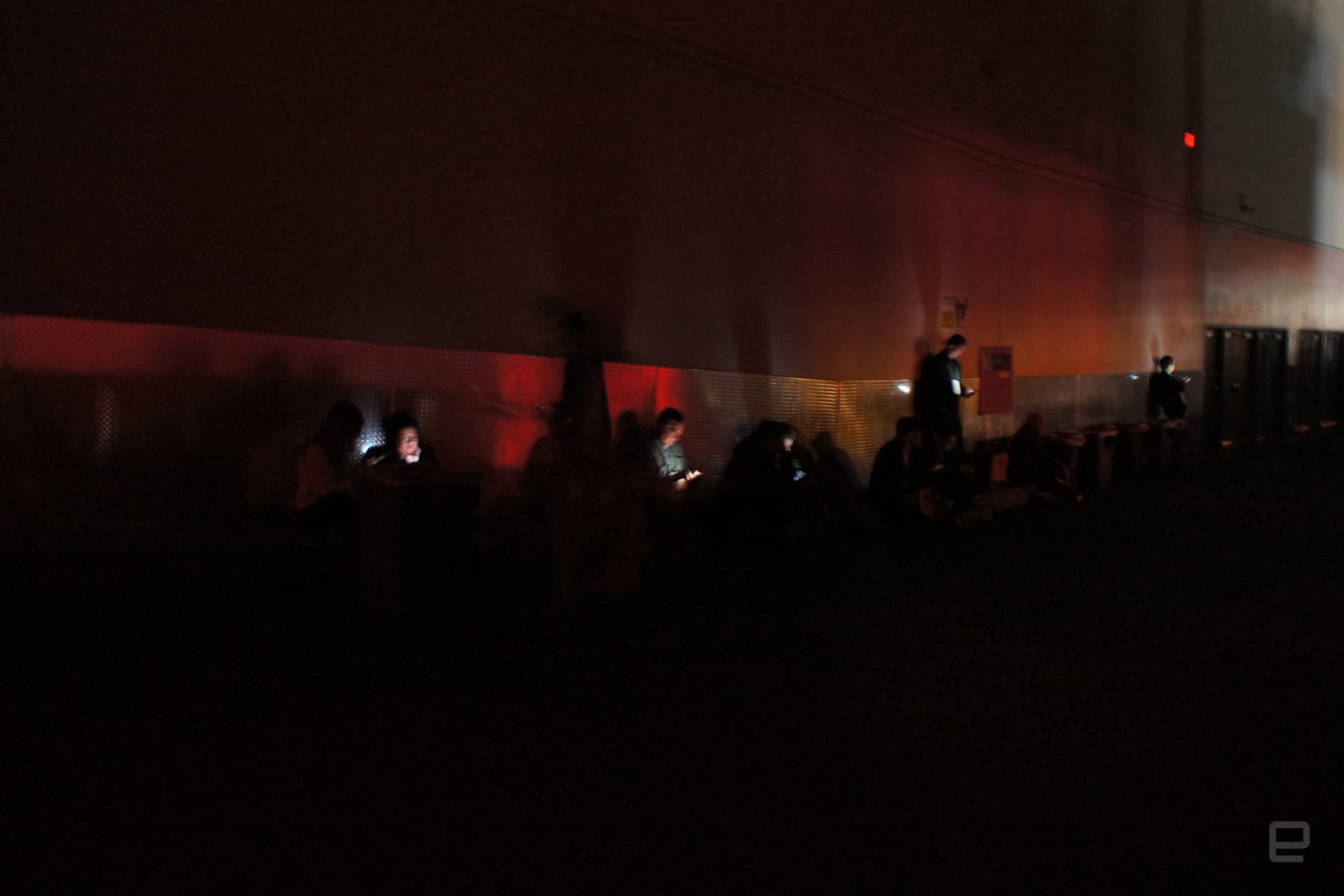 Attendees hold their phones close, sitting at the extremities of the LVCC Central Hall. They weren't about to let a little darkness ruin their conversation.