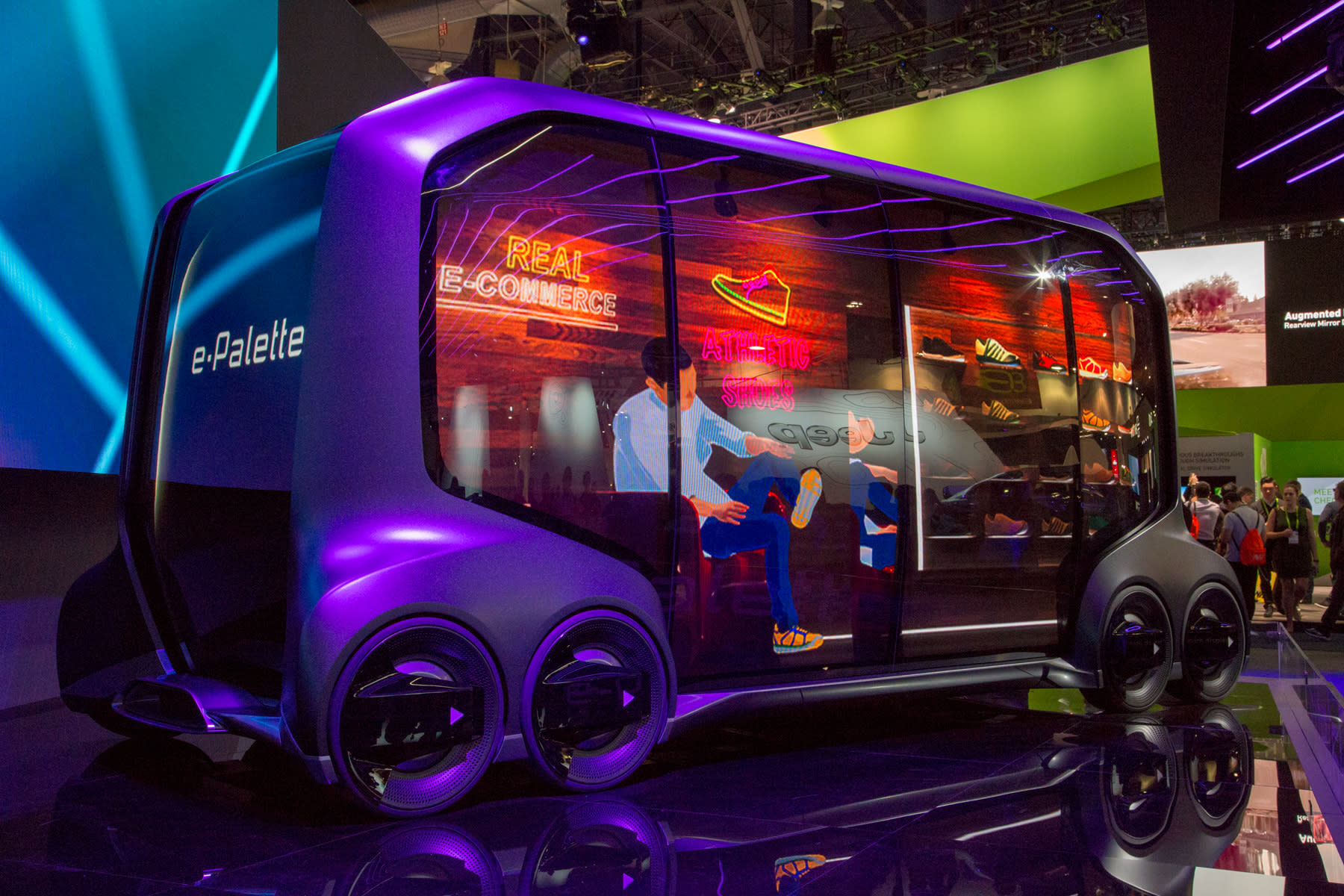 Toyota insists its e-Palette is more than a concept car

The story behind our Best of CES winner.

There's one thing that keeps Toyota CEO Akio Toyoda up at night. It's not a traditional car company like Honda, Ford or Nissan. Or what he's going to have for breakfast the next day. It's technology juggernauts like Facebook, Google and Apple and what might happen when they decide to enter the automotive industry proper. Will the company be ready? Is it doing enough to stay ahead of a potential broadside from Silicon Valley? The answer, Toyoda believes, is to morph Toyota into a data and smart mobility company. One that's less about selling cars and trucks and more about moving people, products and services in the most efficient way possible.

At the forefront of this change is the e-Palette, a fully autonomous electric vehicle with a deceptively simple design. It is, at its core, a box with eight wheels. The interior can be empty or filled with seats, screens or shelves. Toyota thinks it could be used for mass transit, parcel deliveries and temporary accommodation -- maybe all three on the same day, provided the furniture is easy enough to swap out. And there's no steering wheel, pedals or gearshift to worry about: The vehicle will be completely driverless. It is, in short, a blank slate for urban transportation.

At the heart of the e-Palette is the Mobility Services Platform (MSPF), a software layer that Toyota is developing for a seemingly inevitable future in which nobody owns a car. With MSPF, drivers can request and unlock a vehicle with their smartphone. On the back end, Toyota has fleet-management tools, so any company -- it could be Toyota itself or a company that owns a bunch of its vehicles -- can keep tabs on its driverless army remotely. Bryce Merckling, who works on mobility services at Toyota Connected, calls the e-Palette the "physical manifestation" of MSPF.

To build e-Palette, though, Toyota needs some help. Amazon, Uber, Mazda, Pizza Hut and Chinese Uber rival Didi Chuxing have all agreed to form an "alliance" that will help Toyota take the project from ambitious concept to real-world vehicle. These partners are the sort of companies that might ultimately buy or lease the e-Palette on city streets. Pizza Hut could use a few to ferry deep pans around Chicago. Amazon might want a hundred to carry parcels between its enormous warehouses. They each have needs, questions and ideas that Toyota wants to hear to ensure the vehicle is a hit.

"Instead of trying to force something on them," Merckling explained, "we wanted to work with them from the get-go."

Each partner has an area of expertise to bring to the project. Uber, for instance, is the king of ride-sharing at the moment and has its own self-driving pilots under way. Amazon is an e-commerce titan that delivers a small country's worth of parcels every day. And Pizza Hut? Well, Pizza Hut delivers pizza -- and people like pizza. "We just wanted to be involved with partners that we thought were really important," Merckling explained.

Amazon and Uber, surprisingly, are happy to be working with each other. Normally they're competitors (both have food-delivery services, for instance), but here their needs are aligned: Both want an autonomous, electric vehicle to move things around. Toyota has also promised to keep the e-Palette "open." That means Uber should, in theory, be able to plug its own autonomous-driving software into the MSPF and keep a crucial edge over its ride-hailing rivals. "That was a big deal for them," Merckling said.

At the moment, Toyota is planning to build the e-Palette in three sizes: small, medium and large. They're all the same width and height -- only the length varies between vehicles. Merckling stressed, though, that this could change in the future. In fact, almost everything about the project could change as Toyota consults further with the e-Palette alliance. The company isn't sure, for instance, what its final business model will be. It could sell the pods to companies or have a fleet that businesses are able to dynamically hire, customize and then return throughout the day. "Right now we're open to everything," Merckling said.

There are challenges ahead. EV batteries, for instance, need to improve or the fleet will struggle to keep up with demand. Citizens and companies will request them -- but all the pods will be stuck at chargers or unable to reach their final destination. To solve the problem, Toyota is working on flatter, higher-density "prismatic" batteries with Panasonic. "Further evolution, in terms of performance, price and safety, and the securing of stable supply capacity, are pressing issues," Toyoda said when the pair announced their partnership last month.

Toyota also needs to think about public safety and how the e-Palette fits into public policy around the world. Legislators are slowly preparing for a future with autonomous cars. However, with its multipurpose design, the e-Palette is quite different from the average Tesla. Toyota has, however, already won the support of one city. It plans to run the e-Palette alongside other mobility solutions during the 2020 Olympic and Paralympic Games in Tokyo. "Toyada-san is very ambitious," Merckling said. "He always has been. So when he gives a deadline like that, he really wants to meet it. He's not just throwing something out there for fun."

Toyota hopes to have trials in North America and Europe shortly after the games. A full commercial launch is, of course, a long way off. But the company is hell-bent on bringing the e-Palette concept to life. "It's going to be a fun challenge," Merckling added. "We don't want this to be a concept vehicle that's shown off one time and then it's gone. We actually want to develop this and have it on the road." If Toyota can do that while keeping its original vision intact, it will be the CEOs of Facebook and Apple, rather than Toyoda, who are kept up at night.