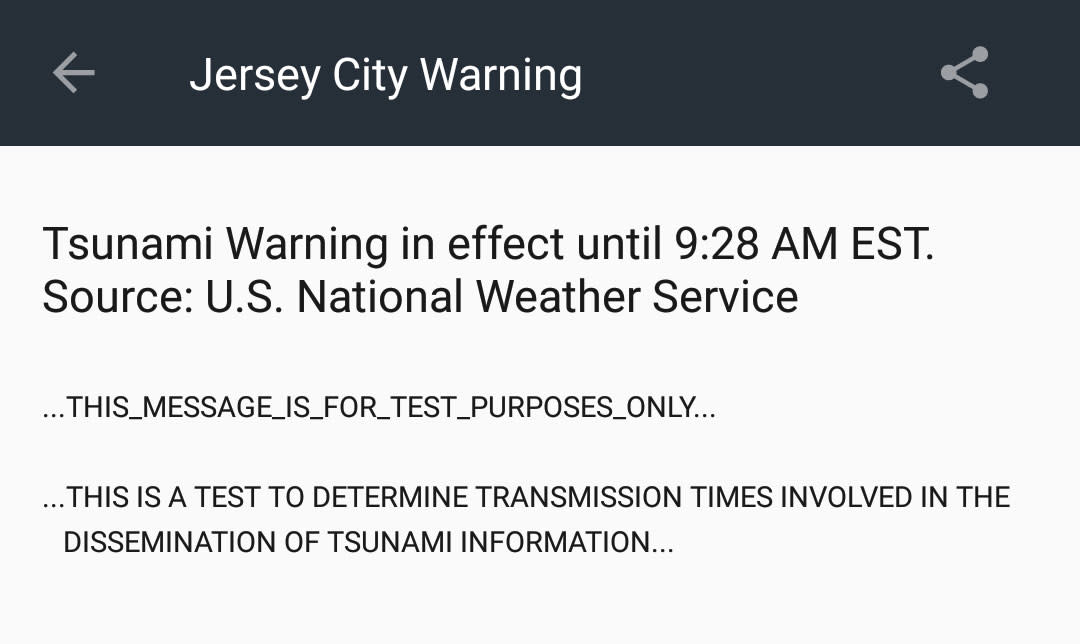 It's only been a few weeks since a false warning told Hawaiians that a missile attack was headed for their state, but another mistaken alert has been sent out into the world. Earlier this morning, an emergency tsunami alert was issued to East Coast residents via the widely-used Accuweather service. According to various tweets, the alert stretched as far north as Portland, Maine; an Engadget editor much further south in Jersey City also received the alert. Accuweather confirmed in a tweet that the original alert was a "test," though it certainly wasn't presented to those alerted in that fashion.

The National Weather Service Tsunami Warning this morning was a TEST. No Tsunami warning is in effect for the East Coast of the U.S.

While the full details of the alert said it was a test, the notification that hit people's home screens made no such notice of that fact. As such, it was understandably alarming to those that received the alert. Since then, various national weather service Twitter accounts also have confirmed that there's no tsunami warning in effect, including the official NWS tsunami alerts account:

The National Tsunami Warning Center did NOT issue a tsunami Warning, Watch, or Advisory for any part of the United States or Canada this morning.

As of now, there's still no word as to how or why this false alert went out. But the timing is particularly ironic: This morning, there's a congressional hearing on the effectiveness of mobile alerts in emergencies. Between today's gaff and the Hawaii missile emergency alert, it's clear that things could stand to be tightened up with how these alerts are released.

In this article: accuweather, alert, emergency, emergencyalert, internet, mobile, nationalweatherservice, nws, tsunami
All products recommended by Engadget are selected by our editorial team, independent of our parent company. Some of our stories include affiliate links. If you buy something through one of these links, we may earn an affiliate commission.