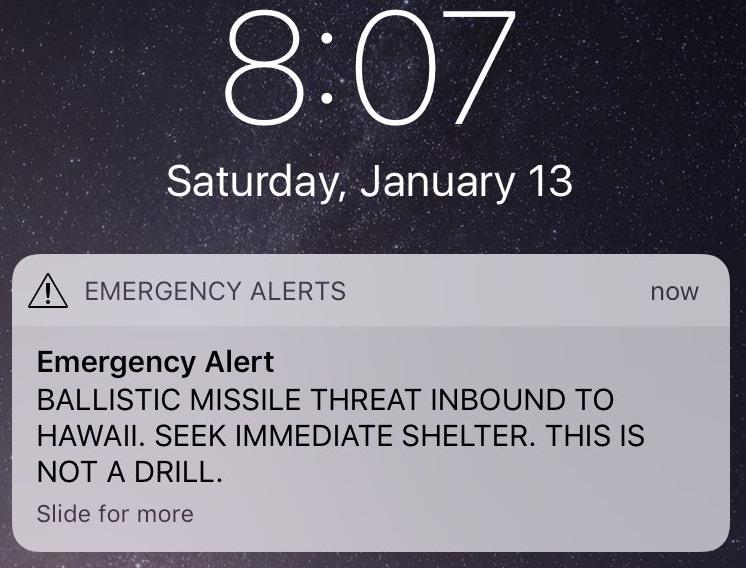 A few minutes ago, phones across Hawaii received the above emergency alert about a "ballistic missile threat inbound," but according to state officials, it isn't true. US Rep. Tulsi Gabbard, Hawaii's governor David Ige and the state's Hawaii Emergency Management Agency all chimed in on Twitter to confirm the alert is false. It took 38 minutes before a second alert reached phones, confirming that the first one was a mistake.

Honolulu police confirmed in a post that "State Warning Point has issued a Missile Alert in ERROR!," while Buzzfeed reporter Amber Jamieson tweets that one EMA employee said it was a part of a drill. US Senator from Hawaii Brian Schatz said the "inexcusable" alert "was a false alarm based on a human error" while the National Weather Service called it a "test message."

The governor said on CNN that "It was a mistake made during a standard procedure at the change over of a shift, and an employee pushed the wrong button."

In 2016 the FCC voted to expand Wireless Emergency Alerts, allowing for more detailed messages that can recommend action or link to more information about something like an AMBER Alert. Later this month, it will vote on changes that could allow for more precisely targeted local alerts. This incident will probably come up in the discussion.

Update: The Hawaii Emergency Management Agency broadcast a press conference about the incident live on Facebook and released a statement (PDF). The governor, along with the head of the EAM Vern Miyagi, laid out a timeline for what happened. During a test of the system around 8:07 AM local time, it appears that an employee needed to click a box in the interface to send the test message, but clicked the wrong area and sent out a real notification across TV, wireless and radio. The tests occur three times a day around shift changes and have been going on since November.

While they quickly realized there was a mistake, there was no template or system set up for sending out a cancellation message, leading to the 38-minute gap. For now, the EMA says it has suspended all drills until it completes a review, and has already implemented a two-person activation rule for both test and actual notifications. Also, a cancellation command that can be triggered within seconds of an error is now in place.

NO missile threat to Hawaii.

There is NO missile threat. https://t.co/qR2MlYAYxL

Today's alert was a false alarm. At a time of heightened tensions, we need to make sure all information released to the community is accurate. We need to get to the bottom of what happened and make sure it never happens again.

STATEMENT: While I am thankful this morning's alert was a false alarm, the public must have confidence in our emergency alert system. I am working to get to the bottom of this so we can prevent an error of this type in the future.

I am meeting this morning with top officials of the State Department of Defense and the Hawaii Emergency Management Agency to determine what caused this morning's false alarm and to prevent it from happening again.

In this article: breaking news, eas, EmergencyAlertSystem, gear, hawaii, missile, mobile, tulsigabbard, WirelessEmergencyAlert
All products recommended by Engadget are selected by our editorial team, independent of our parent company. Some of our stories include affiliate links. If you buy something through one of these links, we may earn an affiliate commission.