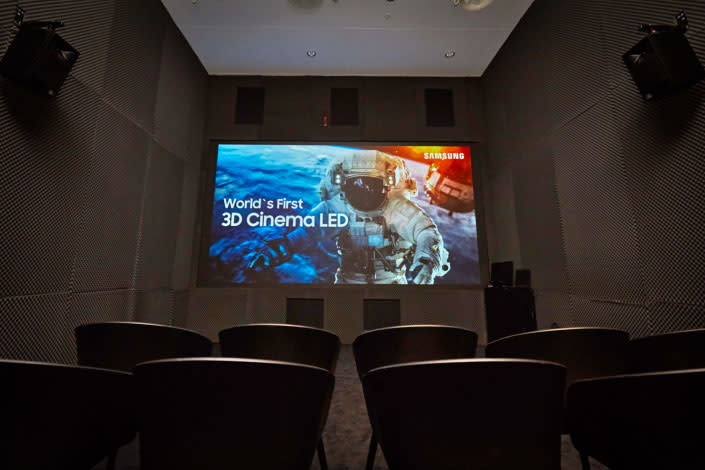 Last year, Samsung unveiled its Cinema LED Screen, a giant, 34-foot screen that can be used in theaters in place of traditional projector systems. Now, Samsung has announced that it has created a 3D version of that screen and it brings all of the image quality benefits of the Cinema LED Screen as well as some added bonuses like less dizziness and fewer headaches compared to typical 3D cinema viewing experiences.

Samsung says that a major problem with the way we currently view 3D films in theaters is the massive reductions in brightness and resolution. "The screen is dark as if the viewers are wearing sunglasses in the theater. The brightness is already halved, and with the 3D glasses that audience must wear, it becomes a one-third level compared to other 2D films," Samsung's Dongsoo Koo said in a statement. "The resolution is halved too." However, the 3D Cinema LED Screen has the same level of brightness as the original version of the screen -- which Samsung has boasted is 10 times brighter than regular projector screens -- even when viewers are wearing 3D glasses.

Additionally, Samsung says it has developed an algorithm that negates one of the factors that cause people to get dizzy while watching 3D films. Koo says the algorithm gets rid of crosstalk between what your right and left eyes see, preventing dizziness and headaches. And like the Cinema LED Screen, Samsung's 3D screen offers minimal distortion no matter where a viewer is sitting. "When watching in the conventional 3D theater, the image becomes darker or distorted as people go to the edge of the theater, but 3D Cinema LED has significantly improved the problem," said Koo.

The new screen debuted at the Integrated Systems Europe show taking place this week in the Netherlands. You can see a clip of the screen in action below.

In this article: 3dMovies, av, CinemaLED, entertainment, gadgetry, gadgets, gear, led, samsung, screen, theater, video
All products recommended by Engadget are selected by our editorial team, independent of our parent company. Some of our stories include affiliate links. If you buy something through one of these links, we may earn an affiliate commission.