Samsung's Olympic Galaxy Note 8 isn't for sale, but I wish it was

We're not Olympians, but we got to play with one of their phones.

In addition to the honor of representing their homelands, this year's Winter Olympic athletes will also receive something else: a limited-edition Galaxy Note 8. Unlike Samsung's first Olympic phone, though, it's unlikely that this version will ever go on sale to the public. To own one, you have to be a world-class athlete or an Olympic staff member whose job is to support world-class athletes. To play with one, though, you just have to write things on the internet, so here we are.

To be quite honest, I'm bummed by Samsung's limited Olympic production run. Like the Pixel 2 XL before it, this Galaxy Note 8 blends an all-black face with a white back meant to evoke PyeongChang's snow and bitter cold. It looks, well, fantastic. The rest of the Galaxy Note 8s color options Samsung devised were pretty understated, but the bright white finish around back — complete with those Olympic rings — makes me wish Samsung did white phones more frequently. The S Pen is white too, which made it easier to spot among the rubble on the blasted wasteland that is my office desk.

Beyond those flourishes, this is functionally the same Galaxy Note 8 we reviewed (and mostly loved) last year. A special dark theme is enabled by default, making app icons look like Olympic-colored wireframes, and you'll find the official PyeongChang 2018 guide plus an app called PinQuest for collecting "exclusive" virtual pins around the chilly Olympic Village. (Apparently, collecting Olympic Pins is already a thing and people at the games can swap those virtual pins for real ones.) Strip all that stuff away and you're left with a very familiar foundation.

Actually, it's more familiar to some than others. I sort of doubt anyone at the Games would particularly care — at least for the next week or so, anyway — but they're getting the model with 64GB of internal storage and Samsung's Exynos 8895 chipset. While Samsung hasn't officially confirmed its update plans, this suggests that these special edition Notes might get their long-awaited Oreo builds before our Snapdragon 835 models. 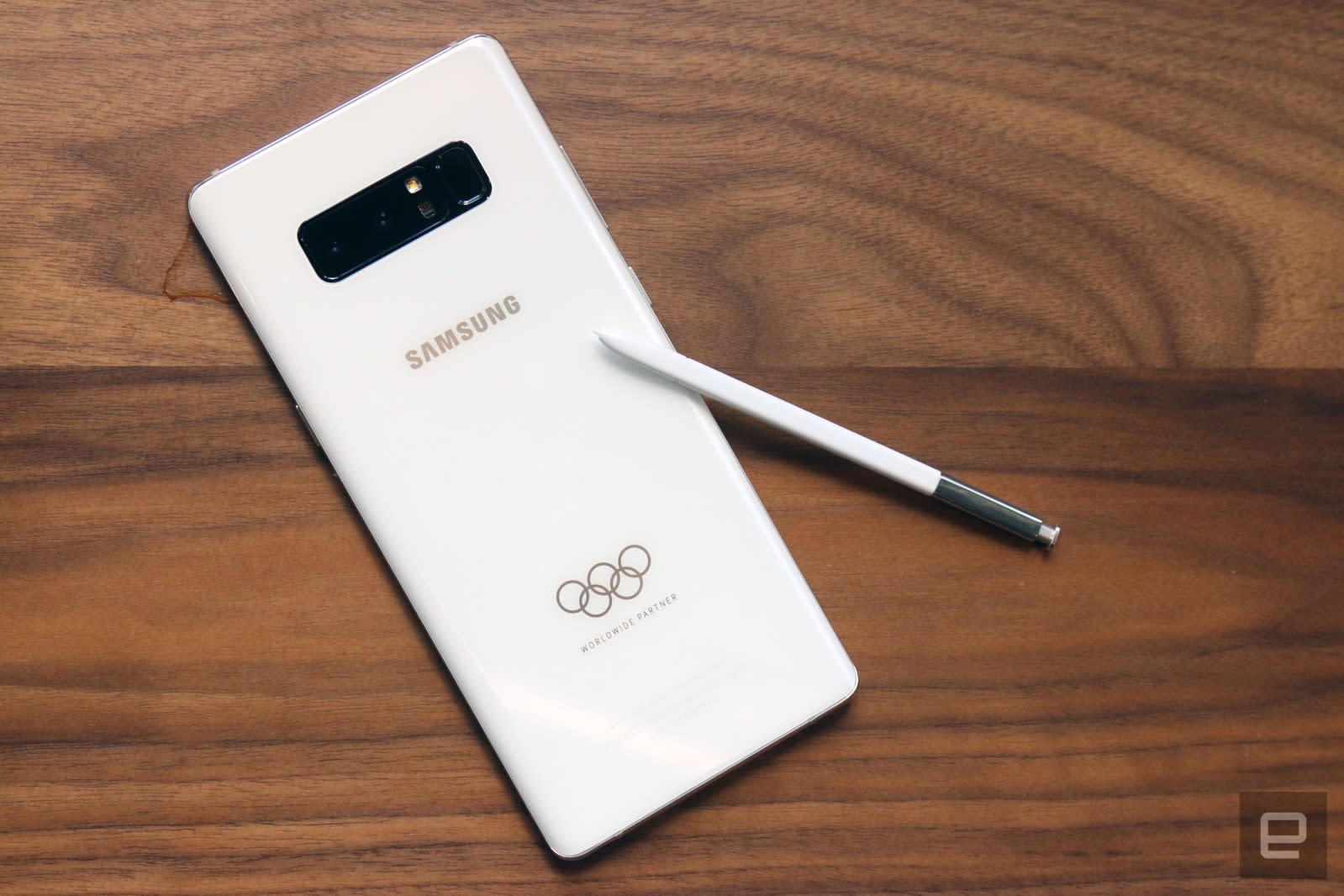 This all might sound a little frivolous, but these phones will do more at the Games than just promote the Samsung brand. In a recent release, the International Olympic Committee confirmed that the Notes "contain essential logistical and competition information for the athletes," which is why representatives from countries like North Korea and Iran will receive the phones despite not being able to take them home. Sadly, I couldn't fool the phone or any of its apps into thinking I was an up-and-coming curling prodigy, so there was no way to access any of that juicy information.

This limited-edition Note ultimately isn't much more than a clever marketing ploy, but it was still a little thrilling to handle a (very small) piece of Olympic history. The opening ceremony officially kicks off early tomorrow Eastern time, and I'll be half-heartedly checking to see how many competitors will be whipping out their Notes in the middle of it.