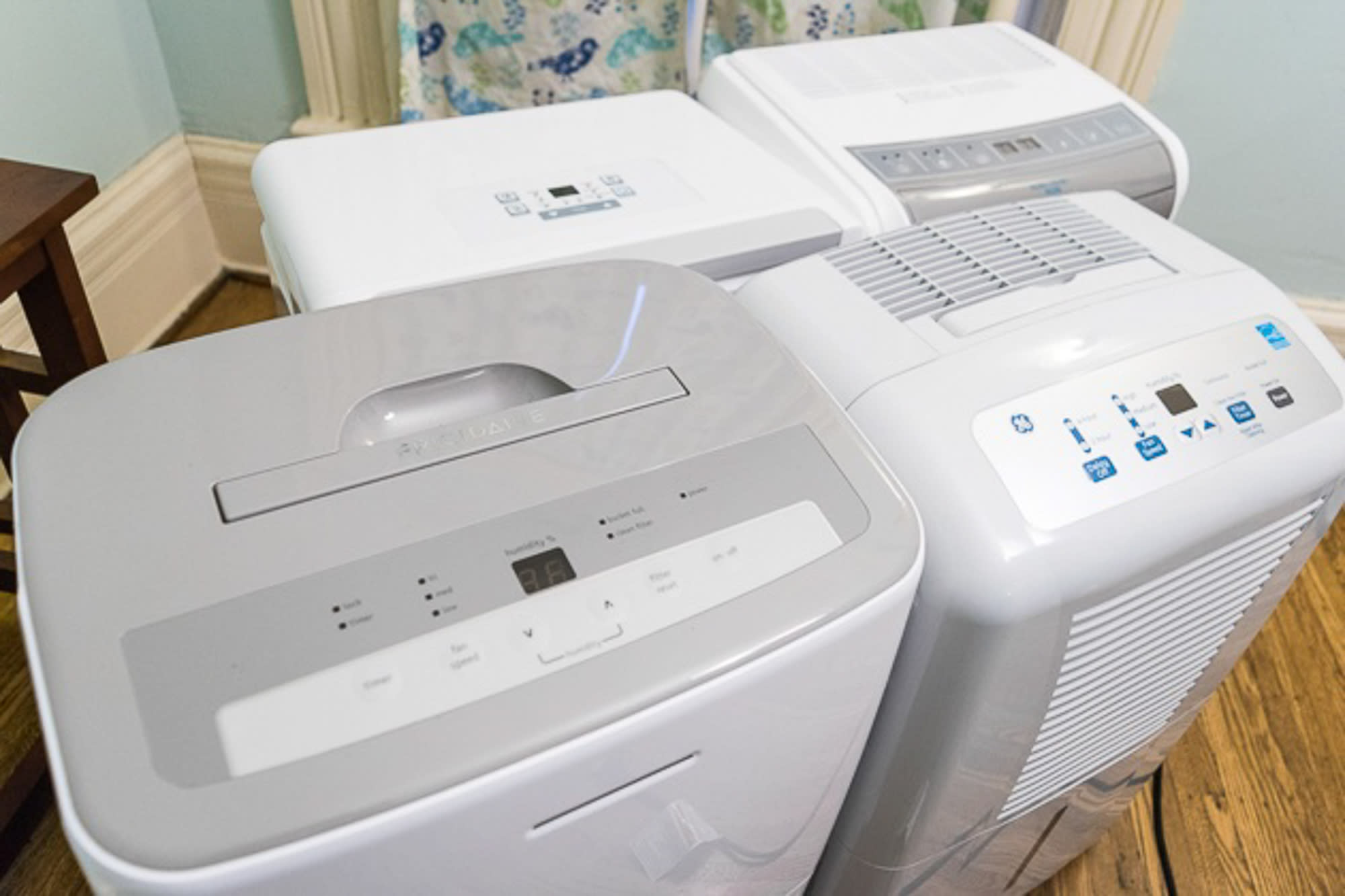 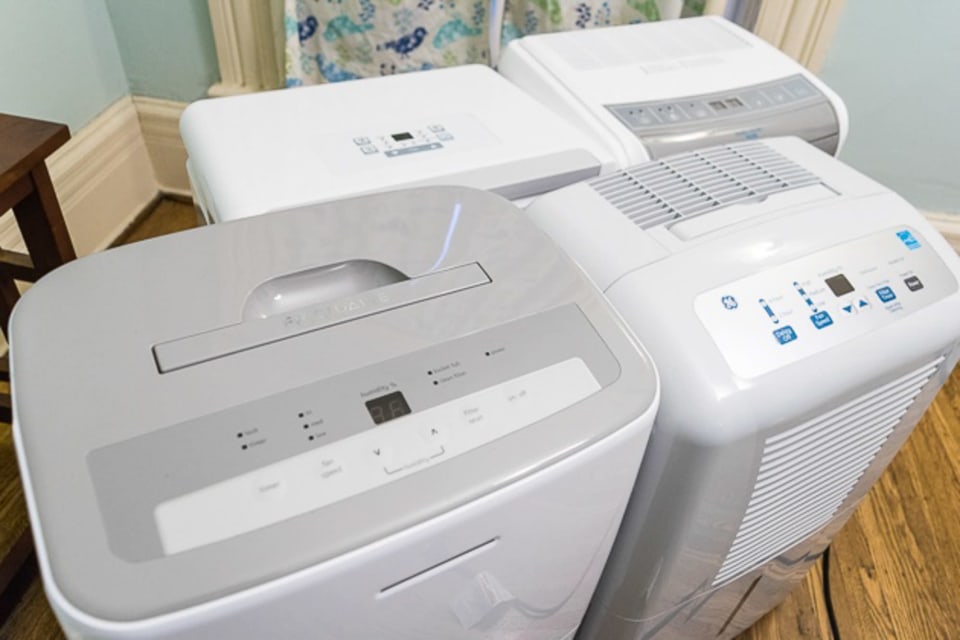 After 40 hours of research and weeks of real-world testing in century-old stone basements, we think the Frigidaire FFAD7033R1 is the best dehumidifier for most people. It's effective at drying air, it maintains an optimal level of humidity, and it's easier to operate than any other model we tested.

Who needs a dehumidifier

Dehumidifiers are most useful to anyone who cannot make permanent improvements to a problematically damp space in a house (generally a basement) that's exposed to the elements outside of the envelope of the HVAC system. In your indoor living spaces, the home's heat and air conditioning should keep the humidity down, but less extreme weather in fall and spring can be challenging. At those times, you can use a dehumidifier in a central closet (with a louvered, shuttered door) to lower a home's overall humidity, but doing so could substantially raise your energy bills. For this guide, we focused on condenser dehumidifiers. These models work much like air conditioners, using a compressor and coolant to chill metal fins, and a fan to draw humid air over those fins. Compared with desiccant-based or thermoelectric dehumidifiers, condensers remove more humidity and are better suited to the climate of a typical home.

We looked for models that maintain a humidity level around 50 percent and had a capacity of 50 or 70 pints. Capacity, for a dehumidifier, describes how much moisture it can pull out of the air each day under optimal conditions. We generally recommend the larger model for most spaces. We also looked for dehumidifiers with a continuous-drain option, which is simply a connection for a garden hose to allow collected water to bypass the reservoir and go straight down a preexisting drain.

To find the best dehumidifiers, we started by combing through editorial reviews from publications like Consumer Reports (subscription required) and Good Housekeeping, as well as customer reviews from Amazon and other store sites. We ultimately called in four dehumidifiers to test, and ran each of them for at least a week. We measured how noisy they were at different settings. We also noted any differentiating features, such as the ease of emptying the reservoir or keeping a gravity-draining hose running, the controls and interface, the reservoir size, the energy usage, the presence of easily understood alerts for a full reservoir or a dirty filter, the appearance, and the warranty.

To learn more about our test procedures, please see our full guide to dehumidifiers. The Frigidaire FFAD7033R1 is the best all-around package we found in a home dehumidifier. It brought a basement measuring 850 square feet from 70 percent humidity down to 45 percent humidity after one overnight session on its medium fan setting; on its low setting, it steadily held the air between 50 and 55 percent humidity. Experts consider this range to be ideal for indoor humidity—more on why in our full guide to dehumidifiers—but all our picks share that ability.

The thing that set the Frigidaire apart was its interface, which was the easiest to understand and use among all the dehumidifiers we tried. It shows only the controls and settings we think most people care about, with no extra fluff. The Frigidaire was the quietest machine we tested, too, with the most manageable reservoir, and it was easy to move around thanks to its sturdy handle, cord holders, and wheels. It's also easier to find in stock, with more reliable customer support, than models from some of the lesser-known brands.

The continuous-drain hose on our Frigidaire test unit was a bit sensitive: Unless we aimed it downhill all the way to the floor drain (as in, not laying it flat on the floor at any point), the unit would default back to filling its reservoir and then shut off when the container got full. The problem was easy enough to address by adjusting the hose, but we had no problems hose-draining the other units.

The GE ADEW70LW (formerly the GE ADEL70LR) is a close runner-up to the Frigidaire. In our tests of the ADEL70LR, we found it was just as effective at dehumidification as the Frigidaire. However, it's a little louder than the Frigidaire at its lowest fan speed, and slightly quieter on high fan speeds but with more coil noise and vibration. The reservoir bucket has a handle, but removing it and then aligning it during reinstallation require a bit more work. You'll find no cord holders, and it's less apparent from a glance that the bucket is full (although you'll probably notice that because the machine won't be running).

The biggest knock on the GE model we tested is its interface, which in our experience had a seemingly weaker LED number display. We also thought the blue lettering on a shiny gray background was difficult to read in low light; the white-on-black lettering of the ADEW70LW should be easier to read. One point in the GE model's favor, however, is its continuous hose drainage, which set up easily and did not fail, even with a coiled hose running into a sink.

Although we haven't tested the ADEW70LW ourselves yet, its efficacy, noise level, and operation all appear to be in line with those of its predecessor, the ADEL70LR.

If you can't continuously drain your dehumidifier via a hose, we recommend a dehumidifier with a built-in pump. In this case, the GE APER70LW (formerly the APEL70LT) is our pick. Internally, it's identical to its no-pump sibling, the ADEL70LR, our previous runner-up pick. When we tested the APEL70LT, it was a bit louder than the ADEL70LR while the pump was operating, but the mechanism comes on only intermittently (as the reservoir fills), and pumping is far more convenient than emptying the reservoir manually. Dehumidifier makers don't specify exactly how far such units can pump water, but reviewers report no problems getting water up to sinks or out basement windows.

In this article: dehumidifier, frigidaire, ge, gear, GeneralElectric, home, partner, syndicated, wirecutter
All products recommended by Engadget are selected by our editorial team, independent of our parent company. Some of our stories include affiliate links. If you buy something through one of these links, we may earn an affiliate commission.