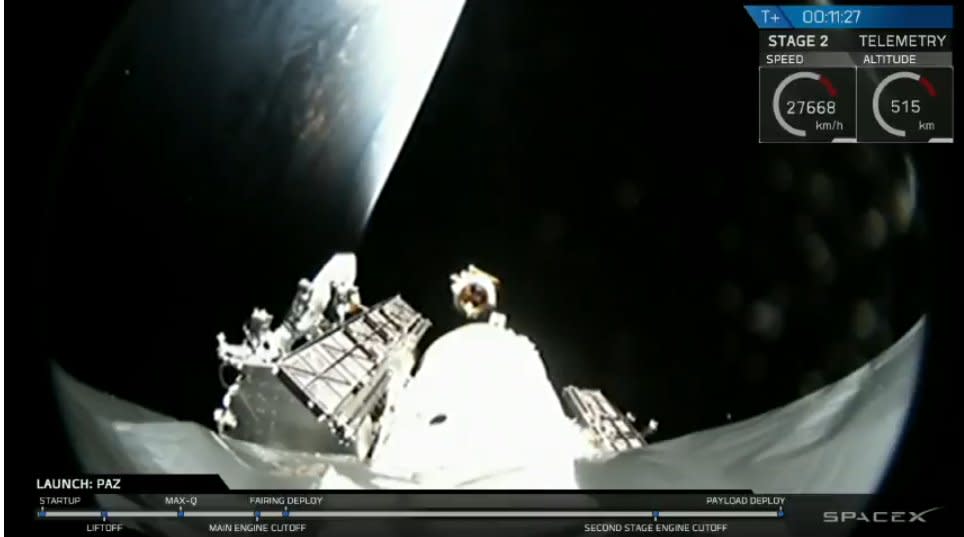 SpaceX successfully launched another Falcon 9 rocket today carrying Spain's radar imaging Paz satellite as well as two of its own satellites, Microsat-2a and -2b. The two experimental satellites will be used to test SpaceX's plan to deliver internet to people around the globe through thousands of low-orbit satellites.

In addition to deploying those payloads, SpaceX also attempted to recover the rocket's nosecone -- a piece of the rocket that protects the cargo during launch that the company hasn't tried to recover during previous launches. A new barge called "Mr. Steven," outfitted with a large net, waited for the nosecone, or fairing, to return back to Earth. However, Elon Musk tweeted that the boat wasn't able to catch the nosecone -- it missed by a few hundred meters -- but the nosecone landed intact in the water. If SpaceX can collect and reuse this particular part during future launches, it could save as much as $6 million per launch. Today's launch was initially scheduled for last Saturday, but had to be rescheduled twice, first for more testing and then again due to heavy winds.

Going to try to catch the giant fairing (nosecone) of Falcon 9 as it falls back from space at about eight times the speed of sound. It has onboard thrusters and a guidance system to bring it through the atmosphere intact, then releases a parafoil and our ship, named Mr. Steven, with basically a giant catcher's mitt welded on, tries to catch it.

The launch took place at Vandenberg Air Force Base earlier this morning. We'll update this post once we have information about the deployment of the two Microsats.

In this article: gear, internet, InternetSatellite, paz, RocketLaunch, satellite, space, spacex, starlink
All products recommended by Engadget are selected by our editorial team, independent of our parent company. Some of our stories include affiliate links. If you buy something through one of these links, we may earn an affiliate commission.