'Black Panther' is amazing. Why are its CG models so terrible?

It's a symptom of the VFX industry's problems.

Black Panther is a refreshing answer to the increasingly stale world of superhero cinema. But there's one glaring flaw throughout the film: its use of CG models to replace humans during action sequences. They're weightless, ugly and, worst of all, incredibly distracting. You'd think that in the year 2018, following the recent glut of comic book films, visual effects (VFX) studios would have perfected the art of creating realistic CG humans. Instead, we appear to have peaked at Avatar in 2010. What gives?

It's not just a matter of visual effects companies getting lazy. As movies have started to rely even more on complex VFX, the firms creating them are overworked, underpaid and, at times, literally fighting for survival, according to one person who has worked on several recent blockbusters (and who asked to remain anonymous due to the sensitivity of their work). That's led to a decline in overall quality, even while some studios continue to push new boundaries, like WETA, with its work in the recent Planet of the Apes trilogy.

Big-budget films used to require between 500 and 1,000 VFX shots, but that number is now regularly between 1,000 and 2,000, according to VFX Movies' comprehensive chart. For example, The Fellowship of the Ring had just 480 visual effects shots in 2001, while the recent Hobbit films each featured around 2,000. (That's also a clear example of how more effects don't necessarily lead to better-looking movies.) Some of the biggest blockbusters today, like Captain America: Civil War and Avengers: Age of Ultron, required an astounding 3,000 VFX shots. To get all of this work done, Hollywood studios regularly enlist a large number of firms for a single film. Around a dozen worked on Black Panther, while Thor: Ragnarok had more than 20 companies churning out visual effects.

"It takes enormous teams to put this [VFX work] together. It takes individuals with specific skills sets to do it," the insider said. "Movie studios need so much work, and they're only willing to pay so much. The VFX are accounting for a pretty serious chunk of these $100 to $200 million budgets, but even that isn't enough to cover the sheer amount of shots."

Many VFX firms today are in a race to the bottom. They're trying to undercut rivals that might steal potential jobs and taking on an excessive amount of work, often without making a profit. Most of these firms also have to pitch their talents to Hollywood, which occasionally involves doing $20,000 to $80,000 worth of work up front for free. Sometimes they end up working on huge films at cost, in hopes that it'll lead to more lucrative (and less demanding) commercial work.

As you can imagine, this has made life rough for VFX workers. "In an attempt to slash costs the vfx facilities have eliminated benefits such as sick days, health insurance, and retirement accounts," writes Daniel Lay, the formerly anonymous activist blogger VFX Soldier, who's worked at studios like Digital Domain and DreamWorks Animation. "Many are forced to work under illegal conditions with unpaid overtime and 1099 tax statuses where we are responsible for paying the employer's portion of social security. The projects have become more volatile as the vfx facilities try to please the demands of the director put in place by the studio."

The sorry state of this industry is best encapsulated in the story of Rhythm and Hues, the company behind the astounding effects in Ang Lee's The Life of Pi. Rhythm and Hues ended up declaring bankruptcy just two weeks before winning an Academy Award for their work in 2013. Their acceptance speech is now infamous. As the firm's visual effects supervisor, Bill Westenhofer, tried to address the issues facing his industry from the podium, he was drowned out by the theme from Jaws and his microphone was cut off. It seemed that Hollywood's interest in VFX studios lasted less than 60 seconds. (The short documentary "Life After Pi" offers an inside look into what went wrong for Rhythm and Hues.)

"Nowadays, almost every shot in a blockbuster film has some CG element," one Industrial Light and Magic (ILM) worker told us. (They also asked to remain anonymous.) "Direction can change almost on a daily basis, where artists are redoing their work multiple times just to hit the ever-changing vision." Hollywood studios are also seeking cheaper labor, which forces VFX companies to open satellite offices in places like Canada, where the US dollar is worth more, and locations that offer significant tax breaks.

Given the hyper-competitive, high-pressure nature of the VFX world, it's no surprise that we're not seeing the best work from these studios. In Black Panther, there are two shots that are particularly disappointing: one in which the superhero flips over a car as it crashes beneath him, and another sequence where two CG characters punch each other as they fall. (The latter sequence feels like a nod to the excellent midair fight in Spider-Man 2, except it looks significantly worse.) The insider's team (who didn't work on those shots) was worried about these scenes when they caught glimpses of them in the film's trailer. They had all the trademarks of bad CG modeling. Their team held out hope that the trailers were using early, unfinished renders, but unfortunately those problems remained in the final cut of the film. We've reached out to Disney for comment, and will report back if they respond.

In most cases, the industry insider tells us, the issues come down to blending the digital effects with physical environments. Even the most incredibly detailed character models will feel a bit off if any of those elements are weak. Studios typically don't have enough time to smooth out the rough edges, so they just have to submit what they've got. In many cases, this leads to incomplete work actually making it to theaters.

One "major" release last year had more than 100 VFX shots that needed fixing, the insider says. Those issues were eventually resolved for the home video release, something that's becoming increasingly common. (And, no, the VFX companies aren't paid extra for those fixes.) While you'd think that faster computers and rendering capabilities would help solve some of these problems, instead studios are using that extra horsepower to take on even more work. 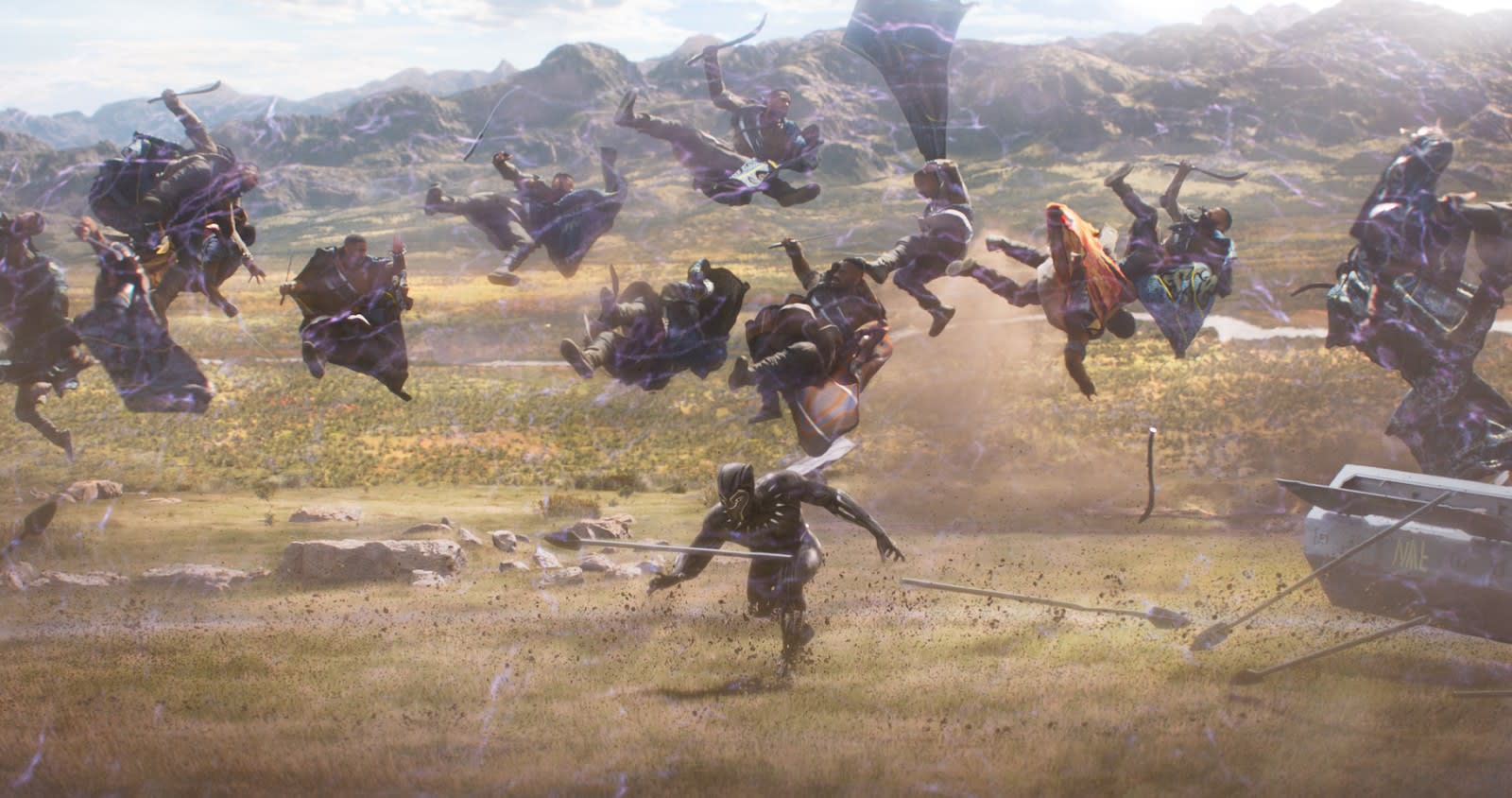 It doesn't help that movie studios are leaning even more on visual effects to fix issues in postproduction. "The idea that you can continue to refine and update whatever is done in a computer means there's less of a need to commit to certain ideas and concepts," the source says. This is both a blessing and a curse for everyone involved. Being able to fix minor issues is genuinely helpful, but it also leads to designers changing the look of suits and other elements late in production. That forces VFX firms to rush out updated work, with very little fine-tuning.

It's not entirely doom and gloom, according to Lay (AKA VFXSoldier). "While I've warned about the bad conditions leading to a bad product in aggregate that hasn't really shaken out," he said in an email. "While conditions continue to be very difficult there continues to be very good VFX work being done in films and that's probably a good indication why things haven't changed... Even with these terrible conditions the professionals and facilities continue to soldier through the challenges and make a great product."

So what can be done about the systemic issues facing the visual effects world? It's a long shot, but our source suggests that plenty of issues could be solved if VFX studios unionized and worked together. That's not something Hollywood wants, since it would probably end up making visual effects work cost more and take longer.

Visual effects firms should also explore newer technology, our ILM source suggested. "A lot of companies don't have time or budget to develop their tools," they said. "It seems like we just throw people at the problems instead of figuring out better ways to work. I've been dabbling in real time [rendering] with Unity and Unreal lately and it's amazing. I think we're not far off from doing VFX film work in a real-time environment, and when that happens the whole industry is in for a little shake-up."

While Black Panther will certainly be remembered for breaking new ground, it's also a fitting example of the issues facing the VFX industry today. A movie that gets so many things right, with the backing of the biggest movie studios in the world, can still fall victim to the crushing workflow of the visual effects industry. That's not just embarrassing for the people involved -- it's a shame shared by all of Hollywood.

All products recommended by Engadget are selected by our editorial team, independent of our parent company. Some of our stories include affiliate links. If you buy something through one of these links, we may earn an affiliate commission. All prices are correct at the time of publishing.
View All Comments
'Black Panther' is amazing. Why are its CG models so terrible?