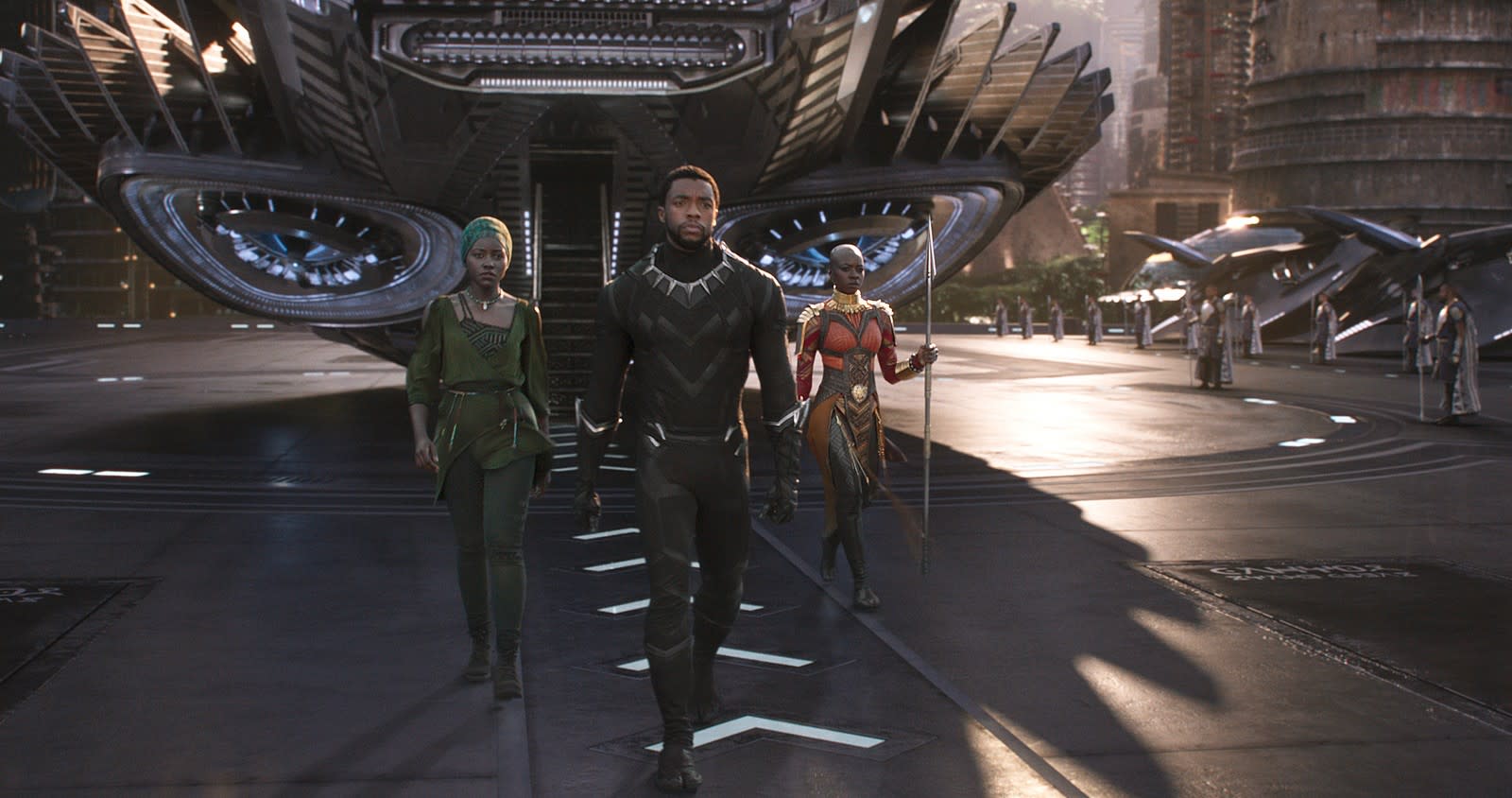 It's unlike any blockbuster film you've seen.

Black Panther is groundbreaking on every level. It's a superhero film that's smarter and more meaningful than anything from Marvel yet. It's a blockbuster action movie written, directed by and starring black artists. And Black Panther also happens to be the purest expression of Afrofuturism -- science fiction and fantasy that reflects the African diaspora -- to hit cinemas around the world. It's about time.

Even if you haven't heard the term Afrofuturism before, you've certainly seen examples of it. It was coined by culture critic Mark Dery in a 1993 essay, Black to the Future (available in the anthology Flame Wars: The Discourse of Cyberculture). It charts the rise of science-fiction-oriented art from black artists, starting with Sun Ra's fusion of space imagery (evoking ancient Egyptian mythology) and innovative jazz. Octavia Butler's novels, like Patternmaster, actively questioned race and gender roles in society.

"The notion of Afrofuturism gives rise to a troubling antinomy: Can a community whose past has been deliberately rubbed out, and whose energies have subsequently been consumed by the search for legible traces of its history, imagine possible futures?" Dery writes. "Furthermore, isn't the unreal estate of the future already owned by the technocrats, futurologists, streamliners and set designers—white to the man—who have engineered our collective fantasies?"

Even though the original comic was created by white men, Stan Lee and Jack Kirby, the character was still groundbreaking for 1966. Don McGregor's 1973 run fleshed out the world of Wakanda further, but it took several more decades for a black writer to have a shot. Christopher Priest's 1998 Black Panther series brought the character out of obscurity and repurposed him as a beacon for diversity in comics. It's no surprise that even famed writer Ta-Nehisi Coates, who's behind the current Black Panther run, considers Priest's work to be the definitive version of the superhero. 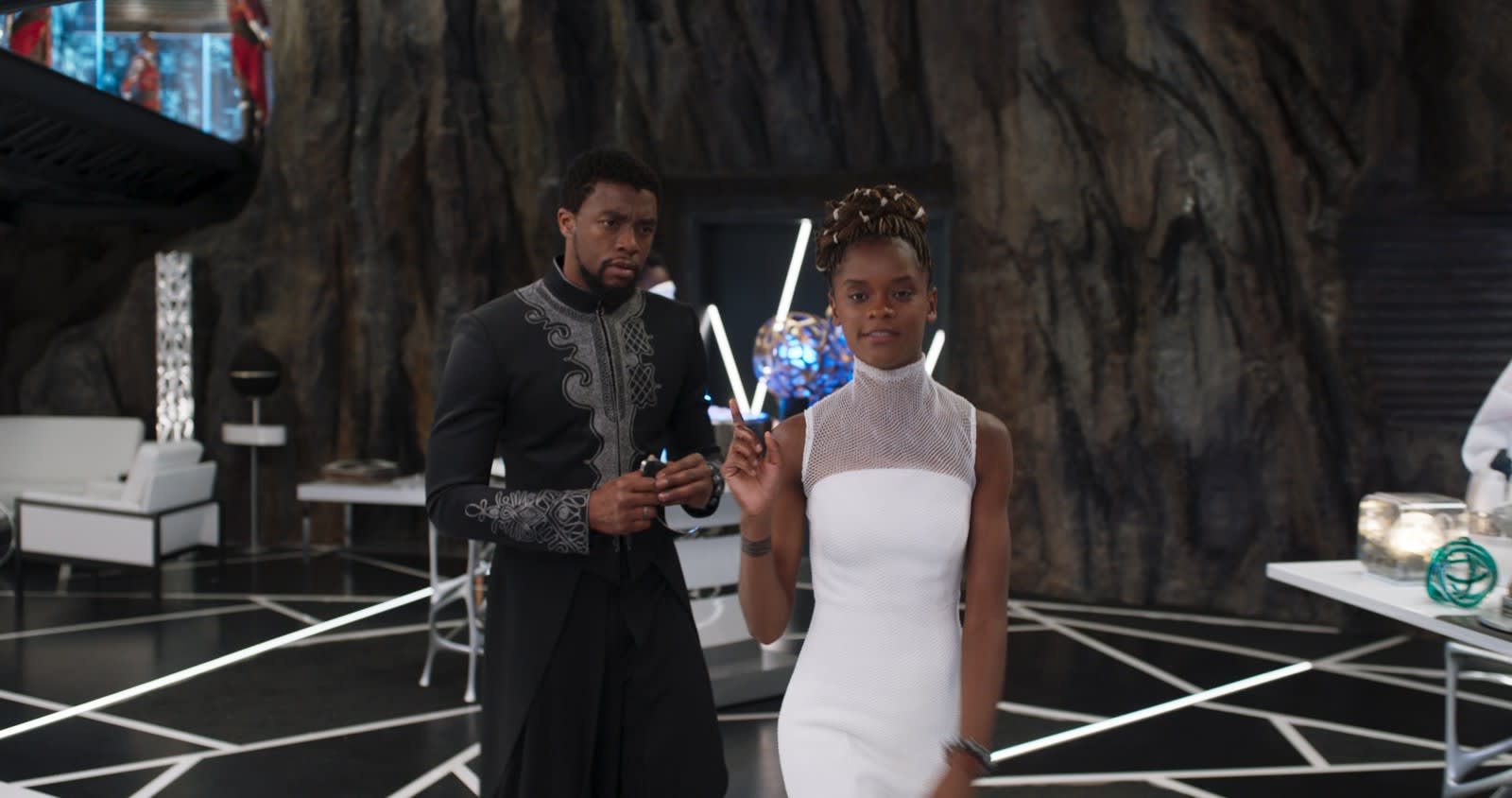 Representation and identity are a core component of Afrofuturism. Fittingly, director Ryan Coogler and his co-writer Joe Robert Cole make that the root of Black Panther. The film centers on T'Challa (Chadwick Boseman), the newly crowned king of Wakanda, who takes up the superhero mantle. To the rest of the globe, it looks like a third-world nation. But secretly, Wakanda is incredibly advanced, thanks to its reserves of vibranium, the superstrong metal that Captain America's iconic shield is made out of. When last we saw T'Challa, in Captain America: Civil War, he was a son seeking revenge for the death of his father. (It's a long story.) But in this film, he's trying to determine what kind of king he wants to be.

The movie is just as much about Wakanda's identity. It's survived for generations by remaining hidden. But shunning the global stage makes it difficult to help Africans and their descendants around the world. Should T'Challa protect his people, or open his borders and serve as a beacon of hope for those who are systematically disenfranchised in societies outside of Africa?

The vision of Wakanda as a vibrant metropolis -- one that's more advanced than anything we've seen on Earth in the Marvel films -- is enough to inspire hope in audiences. It's almost too much to take in at first: there are high-speed monorails, flying ships and gorgeous skyscrapers amid bold colors, fabrics and patterns that make the city distinctly African. And almost instantly upon seeing Wakanda, comes the realization that it's unlike anything we've ever had in a big-budget Hollywood film. How often are African societies shown to be advanced? Let alone more so than the rest of the world. (Who needs Tony Stark when you have Shuri, the Wakandan princess who's also responsible for most of the country's high-tech innovations.)

Unlike most Marvel films, real-world struggles exist in Black Panther. The film opens in Oakland, California, where we see a group of boys playing in a run down playground. One of those kids turns out to be a young boy of Wakandan descent, who grows up outside of the prosperity of his homeland. Over time, he becomes an expert military fighter -- one with a burning hatred for the colonialist societies in the West that have oppressed black people for centuries. It's a surprisingly grounded backstory for a comic book movie character, especially since he's actually the villain, Erik "Killmonger" (played by Michael B. Jordan). 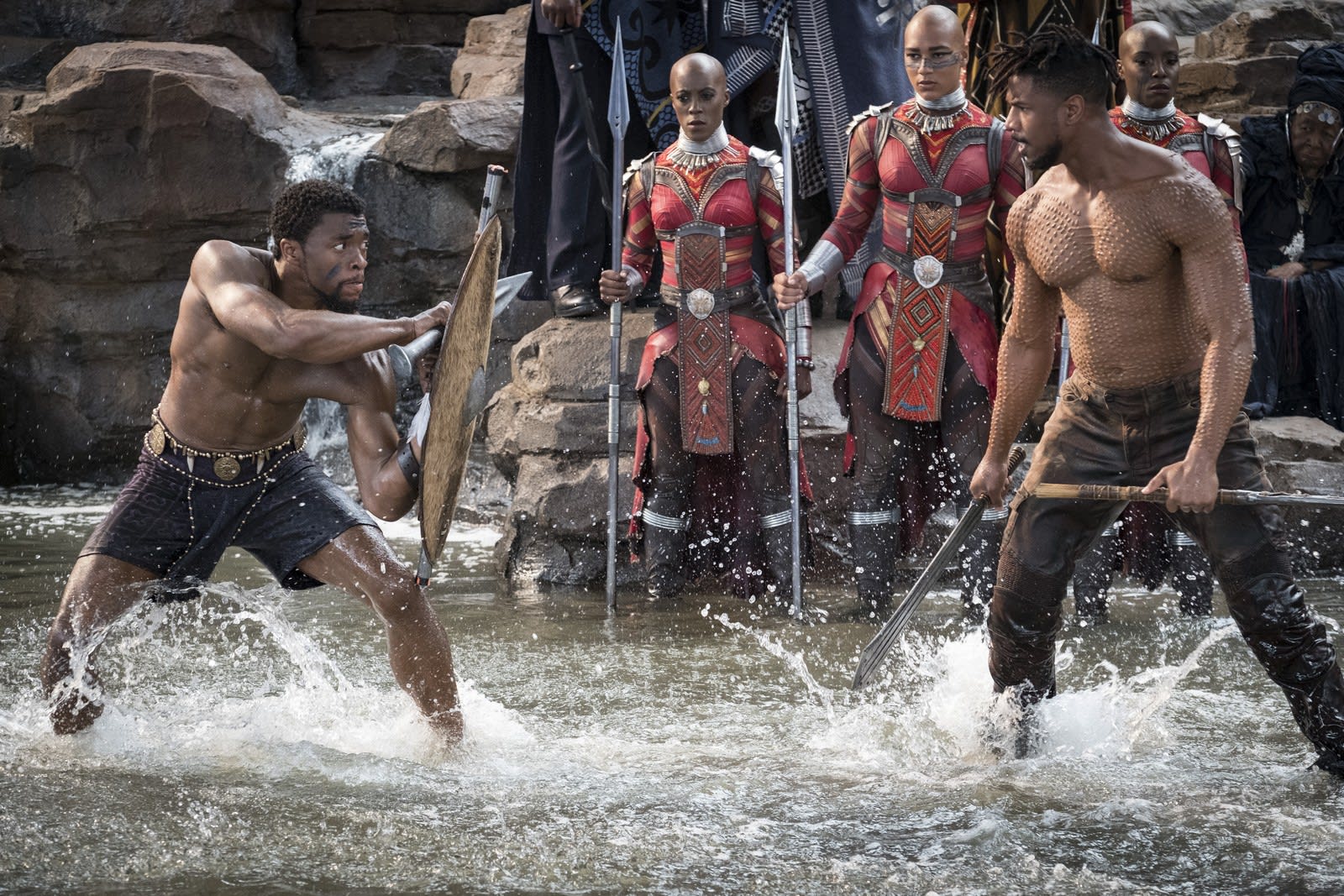 Like any great bad guy, Killmonger is sympathetic. He's seen the unjust world that Wakanda has ignored, and he wants to even out the scales. Unfortunately, for him, that means pushing Wakanda to arm rebels around the world with its futuristic weapons. While his methods aren't exactly just, we still understand that he has a bit of a point. What good is a profoundly advanced society if you don't try to help others? Especially when you know how the rest of the world treats people who look like you? Even during his inevitable showdown with Black Panther, we still have an inkling of compassion for Killmonger.

While T'Challa/Black Panther is the star of the show, the film also reflects the power of women in African societies, a major component of Afrofuturism. His royal guard is a female squad of badass warriors, the Dora Milaje, led by the strong-as-steel Okaye (Danai Gurira). They're dressed in elaborate armor, like something out of Lord of the Rings, and are trained in martial arts and traditional spear fighting. T'Challa's sister Shuri (Letitia Wright) is pretty much the Steve Jobs of Wakanda (canonically, she's one of the smartest people in the world). His ex-girlfriend, Nakia (Lupita Nyong'o), is a highly skilled spy who's also convinced Wakanda needs to make itself known. While he has a handful of male confidants, it's really the women who risk their lives to support and protect T'Challa. 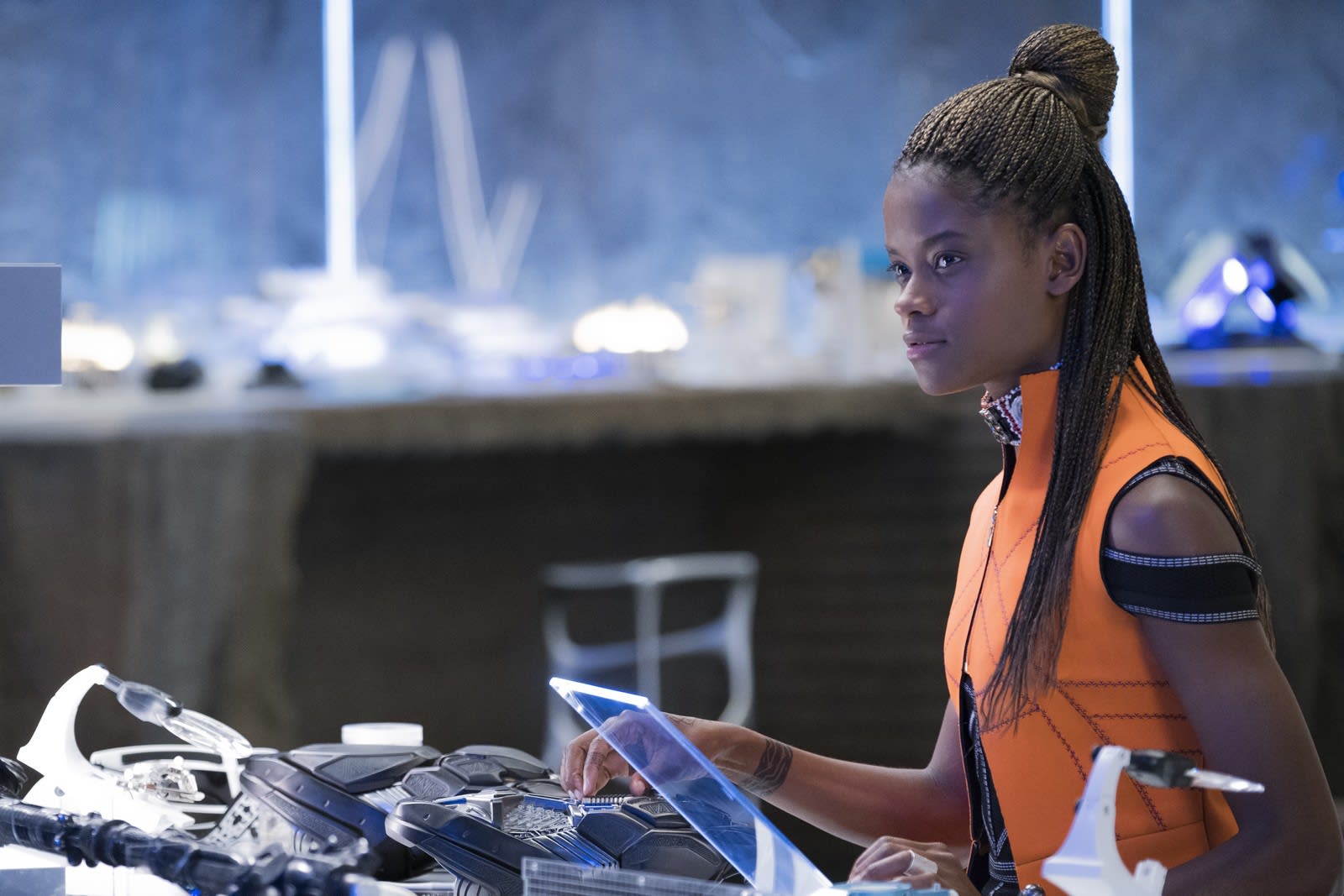 There's no doubt that Black Panther is going to be a global phenomenon. It has the highest Rotten Tomatoes score (97 percent) for a Marvel film. And you could just feel the excitement for the film as people responded to its many trailers (or even better, seeing them in theaters with live audiences). For many black and brown kids, Black Panther will be a defining experience. They've spent their entire lives going to theaters celebrating white superheroes. What does it mean to see themselves reflected? Especially when that hero is also the leader of an incredibly advanced country?

This is the entire Lord of The Rings trilogy. You can watch it in less than a minute. pic.twitter.com/v6UBUlsPo1

The significance of representation matters even more when you consider how Hollywood typically fails with portraying people of color. That's best exemplified in Dylan Marron's Every Single Word project, which features Hollywood films cut down only to show the lines spoken by nonwhite actors. He was only able to scrape together 46 seconds in The Lord of the Rings trilogy. Even more damning was his cut of the entire Harry Potter series, which amounted to 5 minutes and 40 seconds, out of a total 1,207 minute running time. It's no mystery why audiences are excited about Black Panther (or why they've responded so well to the incredibly diverse Fast and the Furious franchise). 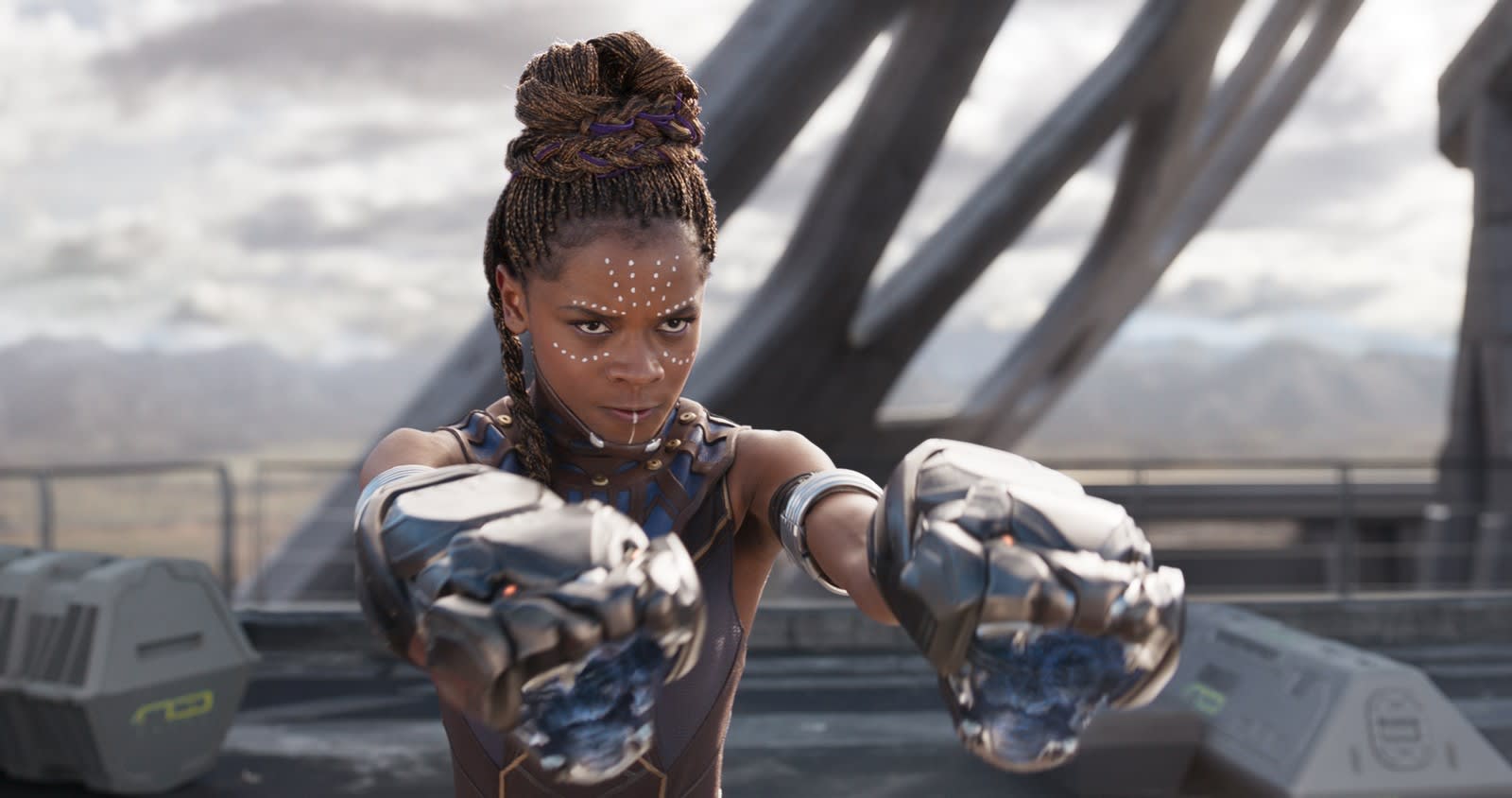 Afrofuturist art has been around for decades, but aside from music videos, it's mainly existed along the edges of popular culture. Black Panther is the first shot at taking that concept mainstream and making black audiences feel like they can see themselves in a comic book film. (Yes, even more so than in the Blade films.) Children will watch this movie and see possible futures where African influences are just as viable as those of the West and Asia. And hopefully, it'll be a sign to other science-fiction franchises (ahem, Star Wars) that they shouldn't sleep on black artists.