And who knows -- it might be the future of phone design, too.

When I think of funky, ambitious smartphones, I don't usually think of the name Vivo. That began to change after seeing a phone with an in-display fingerprint sensor -- the world's first, actually -- a month ago at CES. Now, after playing with the company's APEX FullView concept phone, it's clear that Vivo is more clever than we've given it credit for.

With the screen off, the APEX looks like an unremarkable black slab. There's an iPhone X-like dual camera on its back, a headphone jack on its bottom and little else of note otherwise. Then you turn the thing on, and everything gets pleasantly weird. Like the Essential phone before it, the APEX has barely-there bezels around its flexible OLED display with only a hint of extra space beneath the panel.

And when I say barely there, I mean it: they're 1.8mm around the top and sides, and 4.3mm at the bottom. The company says the phone's screen to body ratio would reach an astonishing 98 percent if that bottom bezel was as slim as the others. That would be an odd data point to just toss out there if Vivo never planned to do it, but a spokesperson wouldn't confirm my suspicions. Still, as close to a full-screen phone as I've seen, and that's worth appreciating even if the initial thrill of bezel-less designs has kind of worn off.

Naturally, Vivo's design means compromises had to be made. To completely excise space around the top of the display, the company had to ditch the traditional earpiece and selfie camera design. Fortunately, the fixes are clever as hell. An exciter wedged beneath the display effectively turns the whole thing into the earpiece (and one you can hear without your ear pressed to the screen, no less). There's still a single down-firing speaker for traditional speakerphone calls, but the canned demo call Vivo ran me through was remarkably crisp. It sounded a little space-y too if I'm honest, though I couldn't tell whether that was because of the phone or the room I was sitting in. And here's the crazy bit: when you launch the camera and try to take a selfie, an 8-megapixel camera pod rises from the top of the phone to oblige. Vivo says it only takes 0.8 seconds for the camera to lock into place, and while I didn't have my stopwatch on my to check, the process was much quicker than I would've expected. Call me a downer, but the odds of any major smartphone maker adopting this approach for the long term is basically nil. After all, it makes selfies feel ever-so-slightly less spontaneous, and the motor to drive the camera up and out of the phone's body seems like an unneeded point of potential failure. Still, seeing the camera in action was cool as hell.

I alluded to the fact that Vivo's X20 Plus UD was the first phone in the world to feature an in-display fingerprint sensor, and the company is already keen on outdoing itself. While the X20 Plus had a single spot on the screen where you could lay your finger down to unlock, the APEX concept has a field that takes up roughly a quarter of the phone's screen. Once you've enrolled your fingers, you can lay them down anywhere within that field to unlock the phone. It's all thanks to a larger optical sensor beneath the screen that can read fingerprints over a much wider area. 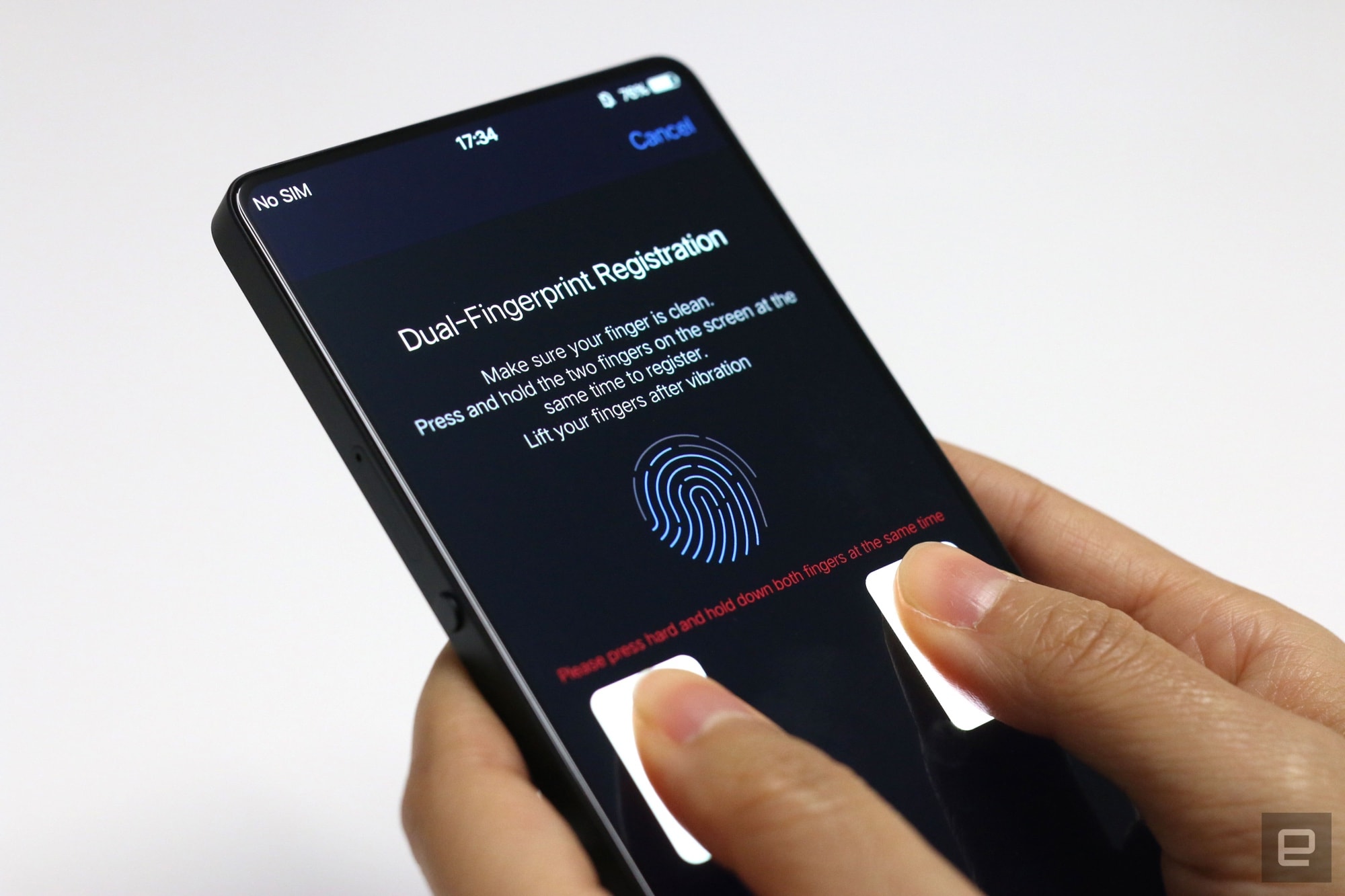 On a basic level, this means you wouldn't have to hunt for a sweet spot with your finger to unlock it. I'll take it. If you're doubly concerned about security though, that extra space also means you could set the phone to require two simultaneous fingerprints to unlock it. The spokesperson showing me the phone mentioned a married couple both authenticating a document on the phone as a potential use case, but since Vivo hasn't had many conversations about the technology with possible partners, I wouldn't count on seeing that anytime soon. Oh, and there's another rub, too: at this point, the phone doesn't seem particularly great at identifying fingerprints. It often took multiple tries to unlock the phone with a finger in the sweet zone, even though it's supposed to work no matter which way your finger is oriented.

That the APEX doesn't really work the way it's supposed to is no surprise. There's no guarantee that Vivo will even work on this concept after it leaves MWC, let alone produce it in mass quantities. If the APEX ultimately remains a technically neat lark, I'm OK with that -- for the industry to move forward, people have to be out there, doing the weird stuff and seeing what works. For now, I'm glad that at least some of those people work at Vivo.