A posture trainer works, if you want it to

The true value of the Upright Go is that you bought one in the first place.

In our line of work, everywhere is an office. Particularly at trade shows and other big events, you can find Engadget editors writing stories in hotel lobbies, the back of cabs or anywhere there's a power outlet. I'm no more consistent at home. Sometimes I stare at my laptop from the comfort of the couch or sit on the floor if my desk isn't proving to be an inspiring location. I hadn't given it much thought until an Upright Go posture tracker arrived on my doorstep. Had a complete disregard for ergonomics made its mark on my spine? Well, I'm still not quite sure.

The $80/£70 Go is the second posture tracker from Upright after the Pro, both of which were crowdfunded into production. "Posture tracker" might be overselling it a little, though. Cut through the marketing and the Go is just a simple tilt sensor in a pretty package. The device itself has a lovely rubbery finish and comes in a neat little travel case with space for alcohol wipes and extra adhesive strips. It's small and light, and once you've slapped it on your upper back, you forget about it within 30 seconds.

Posture sensors have taken many forms, such as cushions, belts and little gadgets you clip to your clothes with magnets. Upright prefers you stick its devices directly to your body. The gel adhesive that binds the Go to your skin is a bit like the glue they use to stick shampoo samples to magazines. It's strong enough for the job but still very easy to remove. It doesn't irritate the skin one bit, and Upright says each strip can last up to 10 days with proper care and cleaning (you get four spares in the box and can order more online for less than a dollar a piece). In all, the device is completely inoffensive, which is essential for something you're supposed to wear for an extended period. Even the vibration feels like it happens away from the skin, quietly whispering in your direction rather than full-on nagging.

The purpose of the Go isn't simply to track, but also to train. When you first use the device, you plug your weight, age and height into the companion app, and it comes up with a personalized training schedule for you. Each day, you have to sit or stand with good posture for a certain amount of time to get your gold star. The time increases gradually (it creeps up in minute increments) for a few weeks until you complete the program. After this, Upright recommends training in 20-minute sessions a few times per week.

I don't see a great deal of value in this personalized schedule. I was barely done poking around the app before my first day's goal of nine minutes was up. The next day I was challenged to sit still for 10 minutes, and so on. Unless you're a fidgety toddler, it's really not hard. I came to realize it wasn't supposed to be. The idea is to lure you, through easily achievable goals, into forming a positive habit.

When in training mode, the Go will vibrate if you lean forward too much, lightly nudging you to straighten your back and correct your posture. It's not nearly as annoying as you might imagine, but it's not something you can entertain all day. You see, it doesn't account for when you're leaning into your desk to grab that cup of coffee, getting up out of your chair or tying your shoelaces. There are countless scenarios that register to the Go as false positives, so inevitably you're going to put it into tracking mode at some point.

Tracking mode doesn't change much. The thing just won't vibrate if you hunch past the threshold. Whatever mode you're in, the device still tracks the time spent straight or stooped, presenting them in colorful, accessible graphs and charts. On the whole, the app is well designed, with an intuitive user interface, all the product information you could want and even built-in chat to get at customer-support staff directly.

But the actual data the app shows you is of highly questionable use. Seeing that you spent an hour of the day in the red zone just isn't something you can act on. Maybe you were eating for 20 minutes of that anyway, or crawling around for a few trying to find a floor socket for your phone charger, etc. Sure, you could hop into the app to recalibrate it every time you go from sitting to standing or turn it off when you know you're about to rack up five minutes of unavoidable hunch, but that's just hassle. After all, one of the best things about the Go is you should forget about it until it's time to charge it that evening. The fact the data isn't of great worth speaks to the imprecision of it all. From sticking the Go as best you can in line with your spine to calibrating it yourself, there's plenty of scope for human error. It's not a great posture analyzer, either. If perfectly positioned and calibrated, yes, it can detect you hunching over. But there are many, many ways posture can be 'bad.' I can shimmy my hips all the way to the front edge of my chair and slouch right back into it, putting a ton of pressure on my lower back. But according to the Go, my posture is still in the green because I'm not leaning forward.

Maybe you sit up relatively straight all day, but lean on one elbow with a phone pushed up against your ear for hours on end. While the Go might give you the thumbs up, a chiropractor would probably be horrified.

One thing I had to educate myself on was what 'good' posture should feel like. "Sit up straight" and "don't slouch" are commands you might've heard often as a kid, but like eating your greens, it's just something you respond to without knowing or really caring why. It's natural to connect poor posture with back pain: Because you're not making full use of the spine as a supportive structure, you're taxing the muscles and joints that pick up the slack. 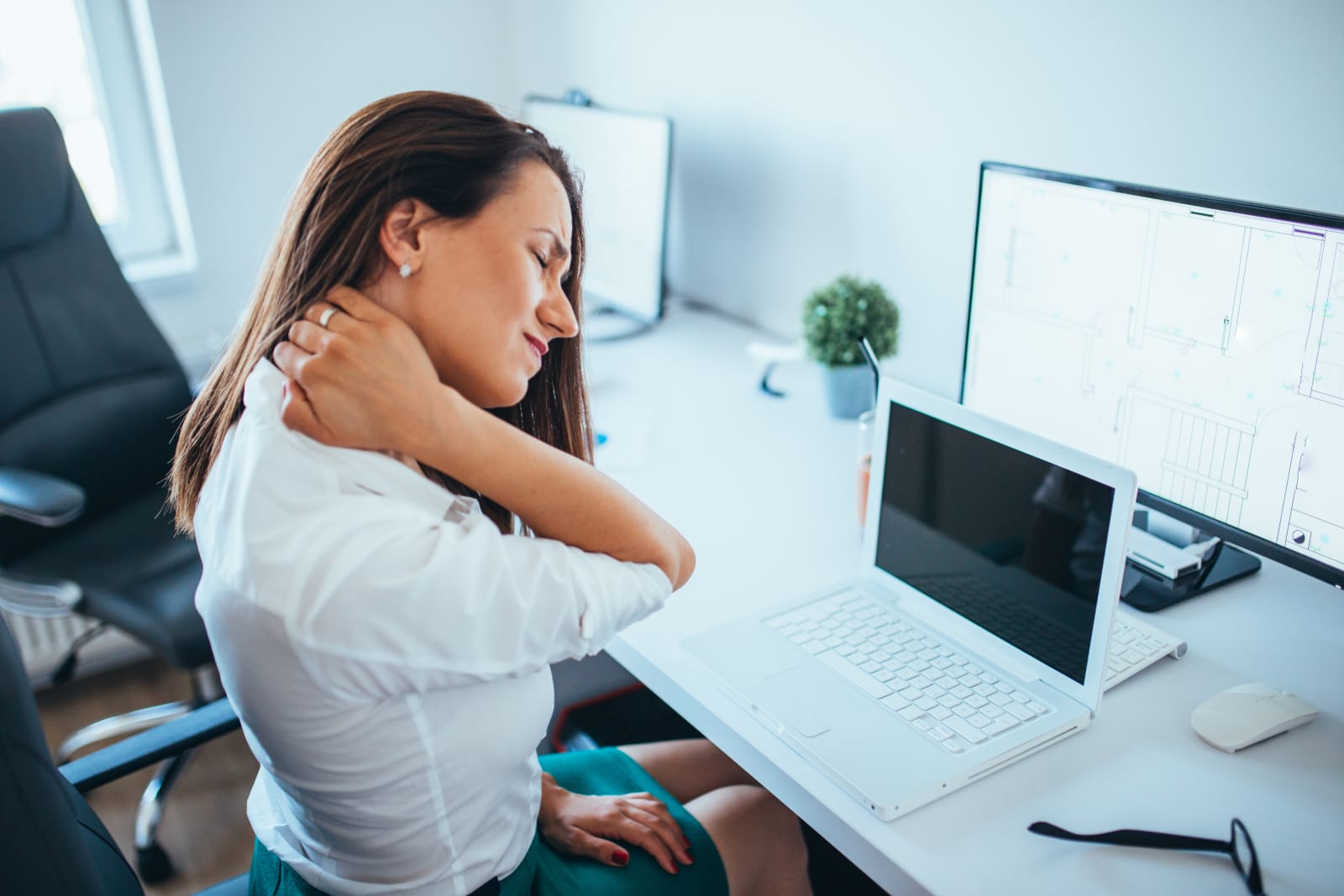 Poor posture can cause fatigue, all kinds of muscular pain and headaches. It can impact your gait, circulation, breathing and generally accelerate wear and tear on your body. Hunching over and putting pressure on your intestines can slow down your digestive system. It can also sap your energy levels, harm your mood and affect how other people perceive you.

It's not an exact science, and some of these symptoms develop slowly over a long period. And therein lies another problem. It's not like after a few days of using the Upright Go, you're going to be pain free, in great spirits and evacuating regularly. It's no quick fix, and since it's not exactly the most elaborate posture analyzer, it might not be the right fix for you at all. The only thing I can definitively say the Go has done for me is give me upper-back pain.

I'm pretty sure this is the good type of pain, though. The gym-goer's no pain no gain kinda pain; a sign I'm working supportive muscles I've let shrivel. And perhaps that's what I didn't initially understand about the device. It's not about what it does or doesn't do. It's about how you respond to it. When it comes to posture sensors, there aren't a great many to choose from. In fact, the $60/£60 Lumo Lift is the closest thing you can get to the Upright Go, and it does basically the same thing. Similar products have come and gone over the years, most starting out as crowdfunding projects. Now all you'll find is dormant websites.

There isn't anything out there right now that evaluates your posture any better than the Upright Go, and maybe there doesn't need to be. Sure, the data is useless as far as I'm concerned, but there's more to it than the core functionality. There are plenty of "smart" things that probably don't need to exist. For example, do you really need an app to walk you through brushing your teeth? I don't think posture sensors fall into that unnecessary category, however.

Perhaps the Go's real power lies in the fact you bought one in the first place. It's a physical reminder you're trying to make self-improvements in much the same way a step-counter is a symbol of your desire to be more active. You put it on each day, switch it to tracking mode, and you try, regardless of what the data says when you eventually take it off again. There's no immediate benefit, and there are no guarantees. There's little need for the device or app to even function as long as you're aware it's on your body and what it's supposed to mean. In this instance, it's not the way that matters, but the will.