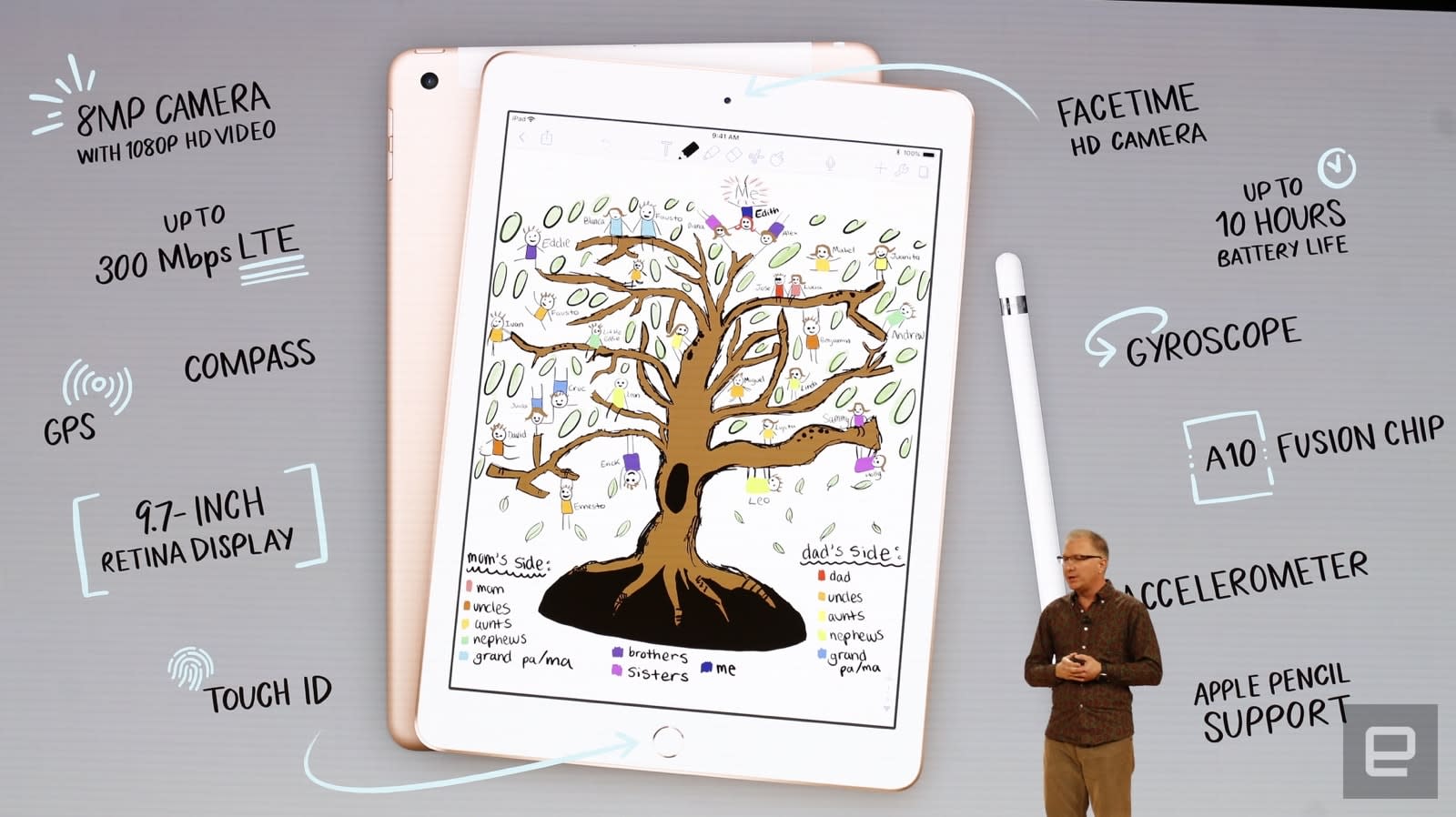 Apple's education-focused event is underway in Chicago and, as expected, the hardware star of the show is a new iPad. VP Greg Joswiak just announced the "new" iPad, an update on the model introduced just about one year ago. The rumor mills predicted a new iPad keeping the traditional 9.7-inch form factor intact, and that's what Apple is showing off this morning. Indeed, Apple said that last year's 9.7-inch model has been the most popular iPad in education "by far." But for the first time, Apple's entry-level iPad will support the Apple Pencil, a move that takes away one of the biggest differentiators between these cheaper tablets and the high-end iPad Pro lineup. Of course, the question remains as to how many schools can deploy both an iPad plus an expensive $99 Pencil along with it.

As for more traditional specs, the new iPad includes an A10 Fusion chip (the same found in the iPhone 7), the usual 10 hours of battery life, an 8-megapixel back camera and "FaceTime HD" front camera, the same 9.7-inch Retina display that we saw last year and optional LTE connectivity. This is all pretty similar to what Apple introduced last March, with the exception of the upgraded A10 chip.

Regardless of hardware upgrades, the software continues to be one of the biggest cases for iPads (in education and otherwise) -- Joswiak says that Apple has over 1 million iPad apps in its store, with 200,000 of them focused on "education and reference." Accordingly, Apple is releasing updates for its suite of apps including Pages, Numbers and Keynote that better support the Apple Pencil. One of those new Pencil-specific features is "smart annotation," a feature that anchors handwritten notes to specific words -- when you move things around in the project, the note goes right along with it. These new iWork apps will be available today.

This marks the first update to Apple's entry-level iPad since last March. Previously, the basic iPad started at $500, but the addition of the iPad Pro line threw Apple's lineup into a bit of confusion. But the addition of a $329 basic iPad as well as changes to the iPad Pro line last June had finally made the differences between the two product lineups clear. Now that the base iPad supports the Pencil, we'll see what else Apple can do to justify the Pro's higher price.

Unfortunately for those hoping for a price drop, this new iPad starts at the same $329/£319 price point as last year's model. There's a $299 price for schools, and it'll start shipping this week. Storage remains the same at 32GB in the base model and 128GB as a $100 upgrade. Adding LTE connectivity still costs the traditional $130 extra, as well. Finally, Apple also saw fit to upgrade the piddly storage that comes with its iCloud education plans -- education plans now include 200GB of storage, up from the pathetic 5GB previously offered.

Correction: This article originally stated that the LTE-capable 128GB iPad cost $459; it is priced at $559.

In this article: apple, applefieldtrip, applepencil, gear, iPad, mobile, pencil, personal computing, personalcomputing
All products recommended by Engadget are selected by our editorial team, independent of our parent company. Some of our stories include affiliate links. If you buy something through one of these links, we may earn an affiliate commission.