Just don't hold your breath for a US release.

By now, you probably know exactly what to expect from a smartphone sequel with an S in its name: it'll be faster than its predecessor but its design won't change very much. That's not necessarily a bad thing for Xiaomi's newly announced Mi Mix 2S, though. Even if it isn't dramatically different from last year's Mi Mix 2, it still blends excellent performance with sleek ceramic body and impeccable attention to detail. It's just too bad it'll remain a China exclusive for a while.

My photos probably aren't doing this phone justice — the Mi Mix 2S is a fabulous-looking device. A quick recap: like the phone that came before it, the Mi Mix 2S has a slightly curved ceramic back flanked by a metal frame to add durability. (In case you hadn't heard, it was pretty easy to foul something up on the original, all-ceramic Mi Mix.) If that's not enough ceramic for you, there are also black and white premium editions that use that hard-to-process material to form the entire back shell. A fingerprint sensor sits midway down the phone's back, and while Xiaomi traded theMi Mix 2's single camera for a dual setup, there's still a dash of gold trim around the housing.

The phone's hyper-slick body does present some issues, though. For one, it doesn't take more than a few minutes to mar the glossy jade-like finish with greasy fingerprints. And because of the Mi Mix's smooth rounded back, it tends to slide around desks (and in my case, out of pockets) more easily than I'd like. But none of these really feel like dealbreakers to me.

The phone's main draw remains the near-bezel-less screen. Xiaomi kept the same 5.99-inch IPS LCD screen from last year and it's plenty bright, even if it lacks the visual punchiness of AMOLED screens. In a likely concession to cost, the screen only runs at Full HD+, which in Xiaomi's case works out to 2160x1080. The edge of the Mi Mix 2S's screen stretches right up to the top and side edges with no notch in sight too, a pleasant change compared to the iPhone X-esque designs we've seen several Android phone makers embrace recently. That expansive look is only possible because of a love-it-or-hate-it choice, though: the front-facing camera is nestled into a corner below the screen, which makes for pretty lousy selfies unless you take the phone's advice and flip it upside down. 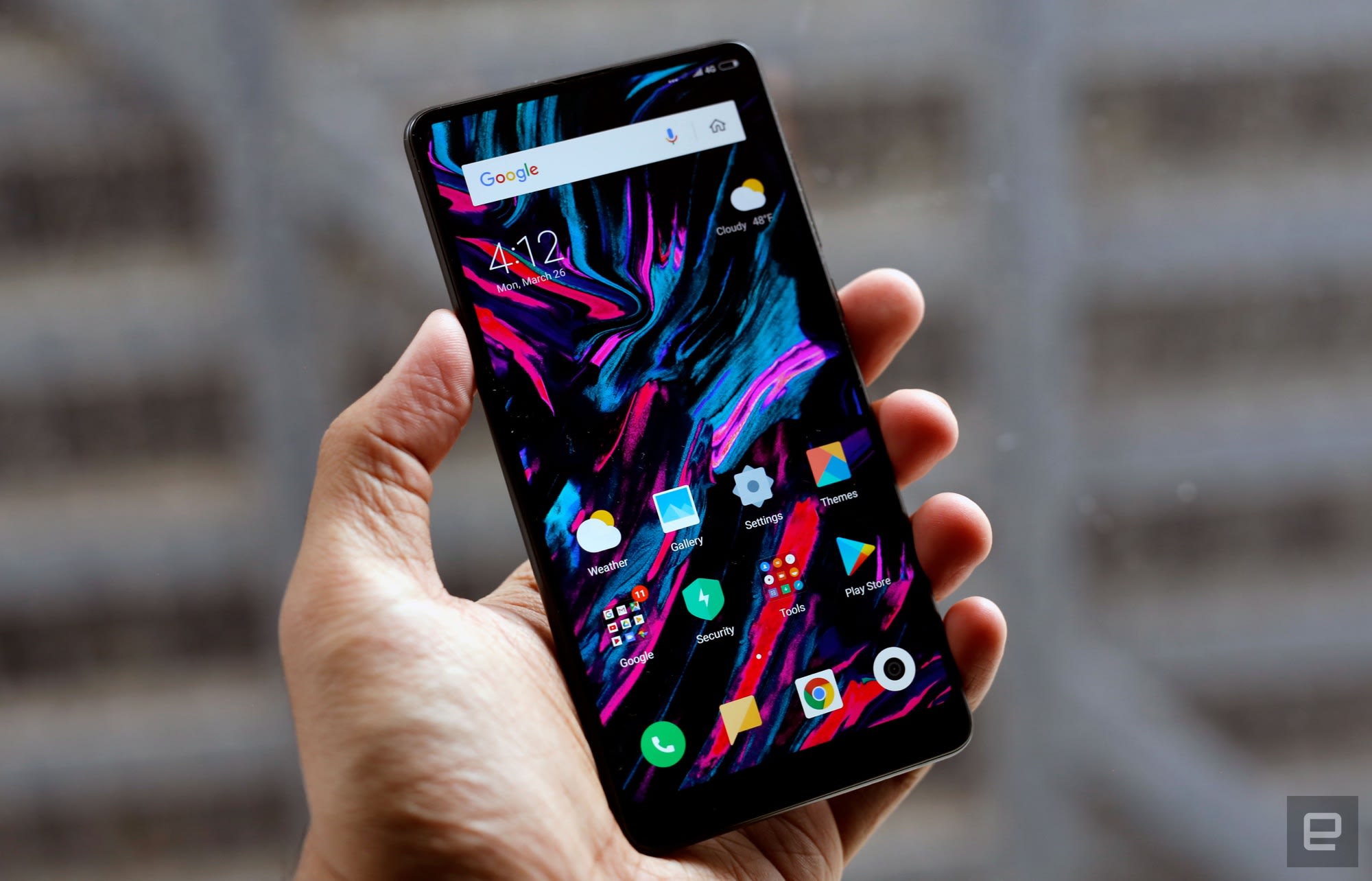 Such quirks are easier to overlook in light of how powerful this device is. It's one of the few phones we've tested this year with a Qualcomm Snapdragon 845 chipset, and it breezed through every task I threw at it. The rare hiccups that did pop up all seemed like pre-production issues with some of the MIUI 9 features Xiaomi layered on top of Android Oreo. Overall though, the Mi Mix 2S left with me few complaints on the performance front — it certainly doesn't hurt that our test model sits at the top of the range with 8GB of RAM.

That premium version also comes with 256GB of storage and support for 43 global radio bands, so it'll hop onto just about every wireless network in the world. At time of writing Xiaomi hasn't confirmed how this model actually costs; ditto for the lower-spec models with 6GB of RAM and either 64 or 128GB of storage. No matter which version you splurge on, you'll at least get Qi wireless charging -- a first for the Mix line.

There's another first for the Mi Mixes here, too: a dual camera. There are two 12-megapixel cameras around back — one wide angle and one telephoto — and Xiaomi's decision to use Sony's IMX363 sensor with an f/1.8 aperture and 1.4-micron pixels as the primary camera means the Mi Mix 2S does surprisingly well in low-light. And like almost every flagship smartphone we've seen in 2018 so far, Xiaomi tried to imbue the Mi Mix 2S's camera with some level of artificial intelligence. In theory, you can point the 2S at a landscape or a person's face and the phone will tune the resulting image appropriately. In fact, the 2S is supposed to be especially good at beautifying faces: engineers "taught" the camera to divide faces into separate areas that get processed and tweaked differently. In theory, anyway. 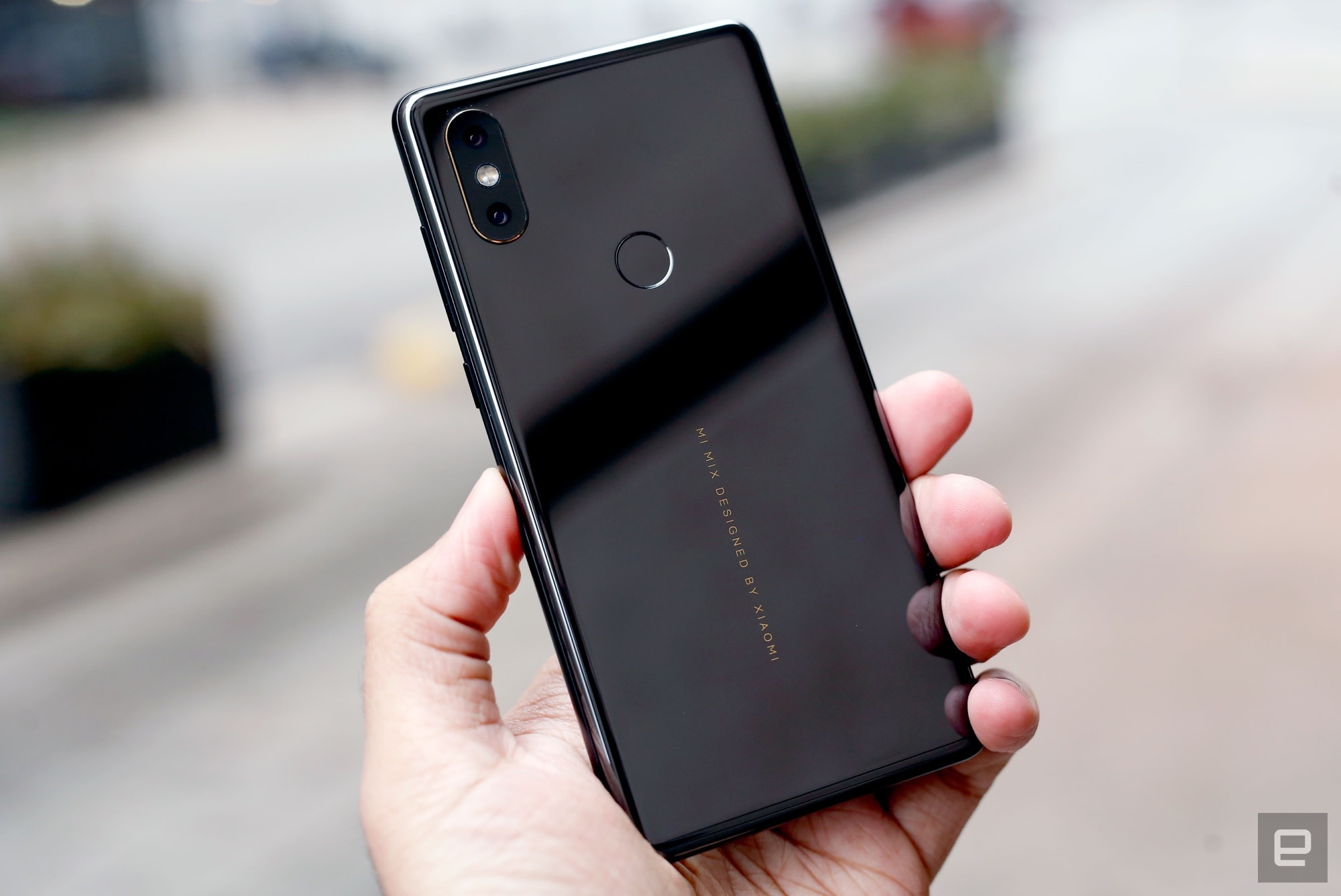 The reason I'm couching all of this is because the early software on our test unit didn't have all of these new camera features enabled. Retail-ready units — like the ones going on sale in China shortly — will be feature-complete. As such, I can't really comment on the quality of the sample photos I've taken over the last few days either. We'll revisit this phone and its camera if and when it gets some final software updates.

It's only been a few days, but I've grown surprisingly fond of the Mi Mix 2S, quirks and all. The phone will launch first in its native China, but Xiaomi spokespeople have confirmed that it'll eventually go on sale in some of the company's international markets, too. If I were you, I wouldn't hold my breath for a US release, though.

Sure, Xiaomi CEO Lei Jun has been candid about his desire to sell his company's phones in the United States, either by the end of the year or early 2019. As a flagship device, though, the Mi Mix 2S might not be the best choice to bring to the US because of the serious competition it would face from the industry's incumbents. The US is a notoriously tough market to crack, too -- just look at Huawei's long, strange journey. None of this means the 2S will never come to the States — it's just that there probably more lucrative slices of the market to focus on first. Cheap, powerful mid-range phones, maybe. Xiaomi has no shortage of those, after all.

As always, I'd love to be proven wrong. Based off what I've experienced with the 2S so far, I really hope I am.

All products recommended by Engadget are selected by our editorial team, independent of our parent company. Some of our stories include affiliate links. If you buy something through one of these links, we may earn an affiliate commission. All prices are correct at the time of publishing.
Xiaomi's Mi Mix 2S is a more powerful take on an already beautiful phone
android
ceramic
flagship
gear
hands-on
mimix
mimix2s
miui
mobile
preview
smartphone
xiaomi