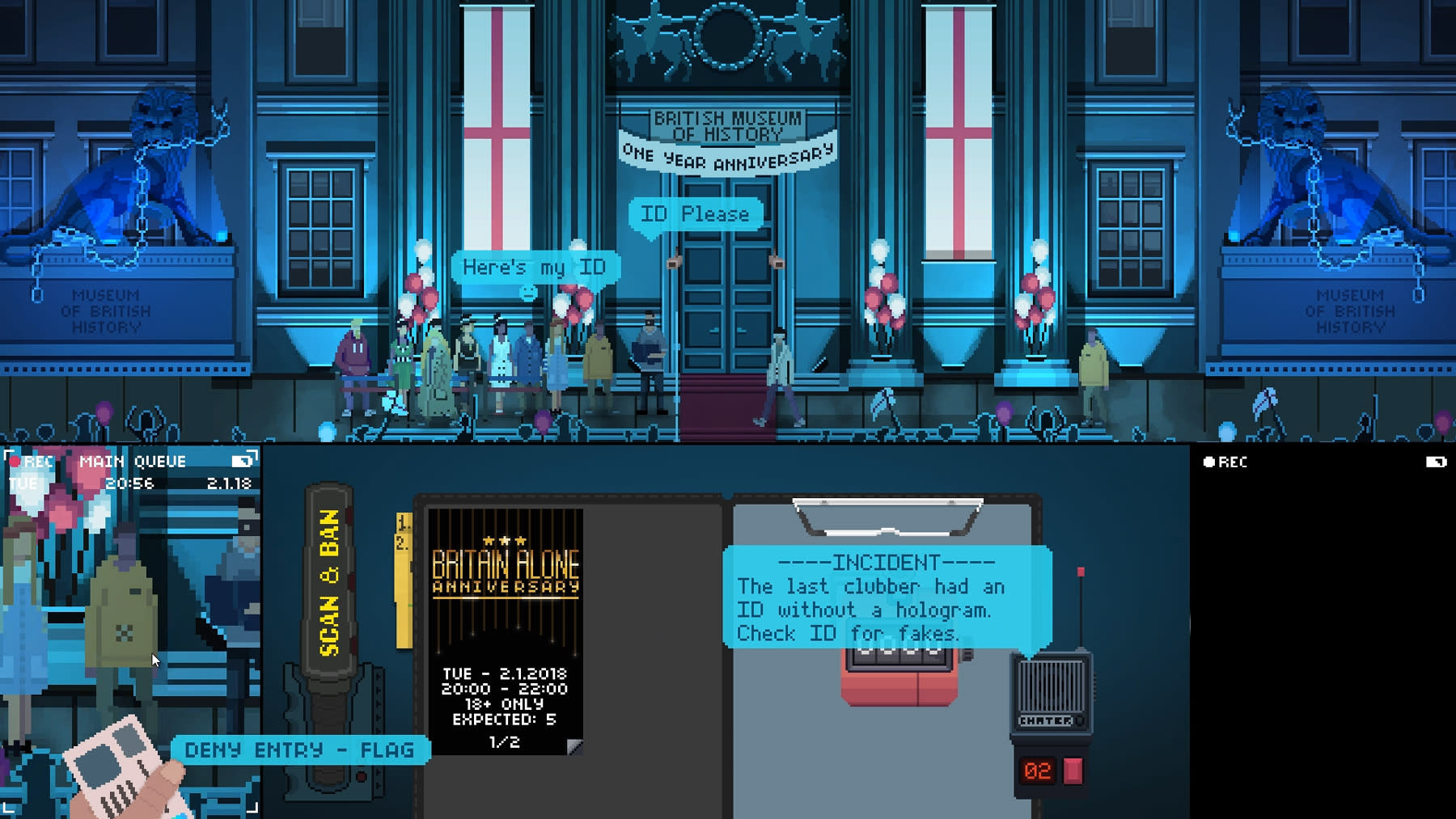 In exactly 12 months, Britain will leave the European Union. It's a troubling time for the island state as politicians squabble over exit conditions and citizens grapple with a deep divide in their economic, societal and cultural values. For many, the future seems bleak, but it shouldn't compare to the one found in Not Tonight, an upcoming video game by Tiki Taka Soccer developer Panic Barn. In this alternate version of Britain, one ruled by an extreme right-wing government, you're forced to work as a bouncer that gets paid for identifying and turning away European citizens. It's a horrific job, but one that's necessary to pay the bills and keep your British citizenship.

The core gameplay is similar to the 2013 indie hit Papers, Please. Instead of a border crossing, though, you're stationed outside pubs and night clubs in chilly rural England. At first, the job is simple — just look at everyone's IDs and make sure they're over 18 — but it soon grows into a complex and morally heartbreaking affair. "You're asked to essentially sift through and distinguish whether someone is European or not," Panic Barn founder Tim Constant said. Do this while checking tickets, removing contraband and managing VIP queues, and you'll walk home with a respectable paycheck.

Constant, however, doesn't want you to do that. "Even if you're in a shit place, and you're being persecuted, the overall tone of the game is just... be nice," he said. "Try to be nice, whatever your situation." Early in the game, for instance, you'll be introduced to a resistance group that wants to overthrow the government and its "right-wing awfulness." To help them, however, you'll have to disobey your employer and promote a diverse, multicultural society. "Instead of spotting French people walking into a pub, you might be asked to let all the French people in," Constant added.

Supporting the rebels will improve your standing inside their organisation. You will, however, lose pay and the chance to improve your living standards. Just to make things interesting, there will also be a health meter that depletes if you overwork yourself. By the end of the game, every job or "mission" should feel like a big decision. "Do I feel right about implementing all of this anti-European legislation? I can do something about it, but I might not get the money I need to pay the bills this week."

The game's grim world is paired with a dark and typically British sense of humor. There's a pub, for instance, that deteriorates to the point where it's just a car park in an empty field. "He's still holding a party there and you can still go and work for him," Constant said. The zany tone was inspired by the "crappy clubs" he was desperate to get into as a teenager in Somerset. "The bouncer made that decision and if you didn't get in, your whole weekend, actually your whole week was basically ruined," he added.

"This game is anti-Brexit, absolutely."

Constant hopes that players will laugh and contemplate in equal measure. Not Tonight is a commentary on Brexit, but its exploration of poverty, immigration and social diversity goes beyond Britain's borders. "It's not necessarily Brexit itself," he said, "but anything that's used to divide us. Anything that divides us into categories is bad in my opinion." The game will launch "soon" on PC followed by the PS4, Xbox One and Nintendo Switch later this year. Mike Rose, the founder of British publisher No More Robots, hinted that a mobile version could be possible in the future too. 12
In this article: art, Brexit, eureferendum, gaming, NoMoreRobots, NotTonight, PanicBarn, PapersPlease
All products recommended by Engadget are selected by our editorial team, independent of our parent company. Some of our stories include affiliate links. If you buy something through one of these links, we may earn an affiliate commission.