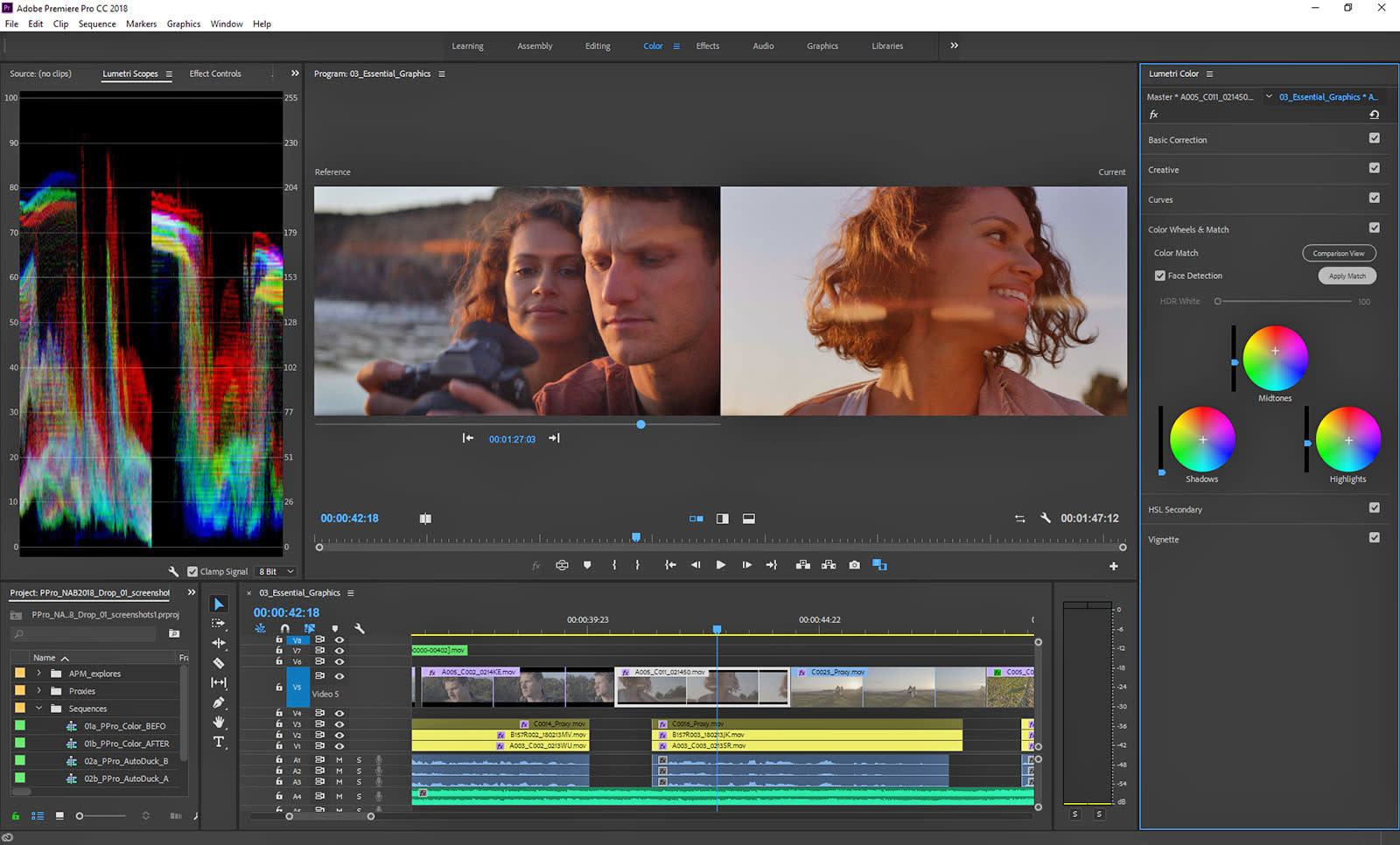 At NAB 2018, Adobe has announced that the Sensei AI used in Photoshop and Lightroom have come to its Premiere Pro CC editing app. The first tool, Color Match, takes a lot of tedium out an edit. Even when filmmakers are careful, hues and tones can vary from shot to shot, so editors usually have to do a laborious color correction. All you have to do is tweak one shot just the way you want it, and Color Match will apply them to your other shots as editable color adjustments. That way, if it's still not quite perfect, you can do a final tweak to get it right.

The new Face Detection tool does roughly the same process, but looks at skin tones in the target images when it goes to match. To further help with color correction, Adobe is also bringing a split view so you can see color graded shots side-by-side or by using a wipe slider. Finally, there's a new "Video Limiter" that will help editors confirm their shows conform to broadcast standards.

Adobe didn't forget about audio, which is another major editing pain point. Premier Pro CC has a new feature called "Auto-Ducking" that uses the Sensei AI to automatically lower music levels during dialogue and voiceovers. As with Color Match, all the adjustments are keyframed so you can fine tune them afterwards.

On top of the AI stuff, Adobe has made it easier for Creative Cloud users to grab Motion Graphics templates for creating fancy text treatments. There's also a new version of the Adobe Immersive Environment that makes it easier to edit in VR. Finally, After Effects has an enhanced "Puppet Engine" to help VFX folks make more organic-looking effects, and Character Animator CC has improved particle physics to create things like snow or exploding walls. You should be able to download the new apps now, or soon and try out the new features tout de suite.

In this article: Adobe, AI, AutoDucking, ColorMatch, design, Editing, gear, PremiereProCC, Sensei, video
All products recommended by Engadget are selected by our editorial team, independent of our parent company. Some of our stories include affiliate links. If you buy something through one of these links, we may earn an affiliate commission.