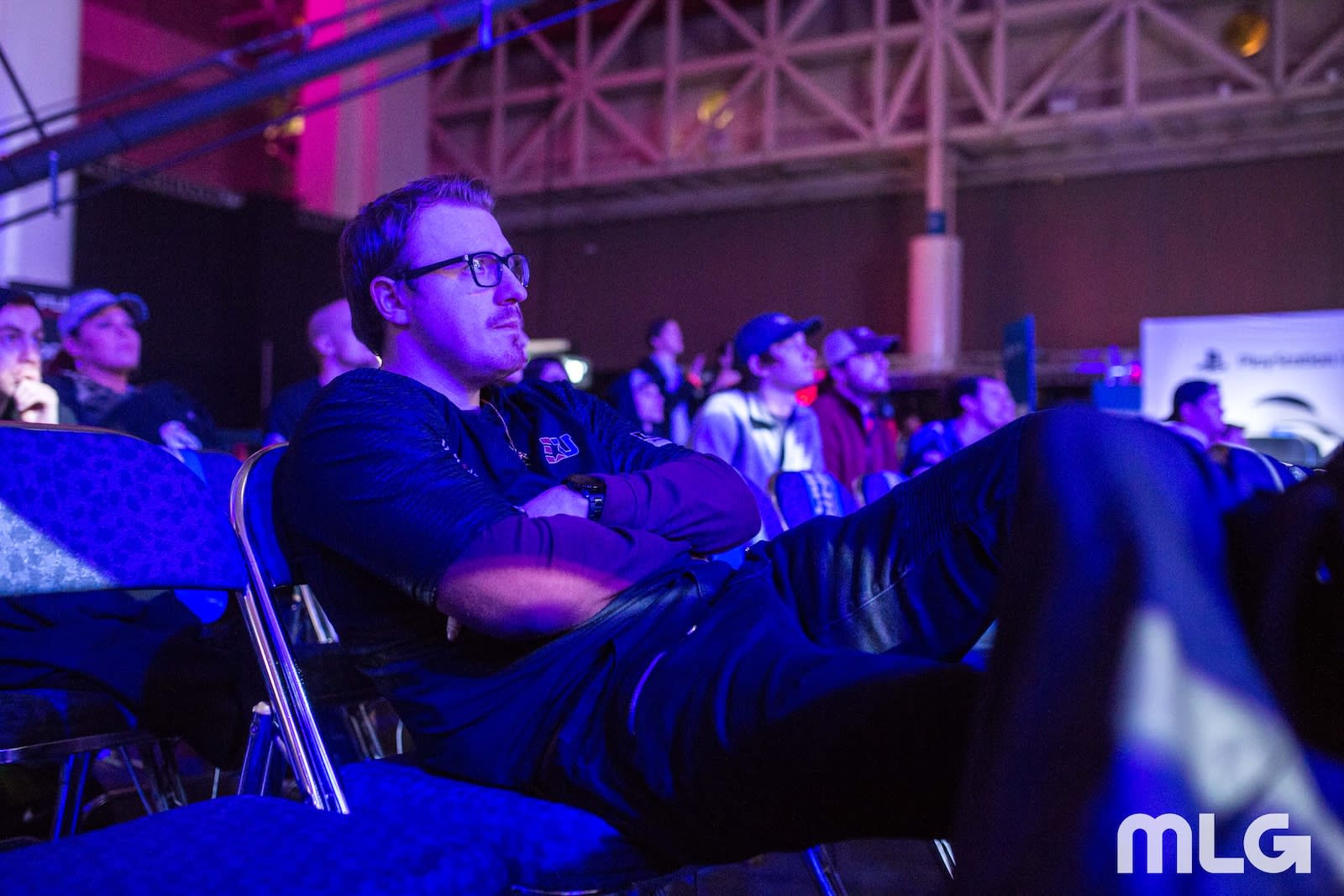 Retired at 24: The life of a pro 'Call of Duty' player

Growing up with video games.

Matthew "Burns" Potthoff retired when he was 24. He'd spent 11 years building a career as a professional Call of Duty player, and when he realized his time in front of the screen was up, he made a graceful transition into eSports management. Today, he's 26, and he works behind the scenes with eUnited, a North American eSports squad with teams across Call of Duty, Counter-Strike, Gears of War, Smite and PUBG.

Potthoff's story sounds more suited to someone in their 50s or 60s -- traditionally, retirement is something that happens after decades of work in a chosen field. However, eSports is a new, rapidly evolving industry, largely staffed by young people with big dreams. Potthoff's career mirrors eSports' recent rise to mainstream fame, but it also serves as a cautionary tale for new players, many of whom are diving into the scene straight out of high school -- or even before. Potthoff's dad drove him to his first eSports tournament when he was 13. It was a small, local competition in Chicago in 2005, featuring matches for Halo and Call of Duty -- Potthoff competed in both and performed well enough to collect a prize at the end. However, he didn't receive the reward he expected.

"The prize was not what was projected on the website, so my dad got extremely mad and thought eSports was like a scam," Potthoff says.

In 2005, professional gaming was not an established fact of the Western video game world. While fans hosted tiny competitions across the US, it would be four more years before League of Legends, a driving force in modern eSports, would even exist. It would be six years before Dota 2, Valve's legendary eSports title, would break prize-money records with its first $1 million tournament. Twitch wouldn't be around for six more years, either -- in 2005, most folks were still baffled by the idea that watching people play video games could be entertaining.

"I was almost using gaming as an escape."

But Potthoff, as a teenager growing up in the Midwest, saw a future in professional gaming. Despite some shady practices at unregulated tournaments in those early days, he kept entering competitions and performing well. In 2011, he won the Modern Warfare 3 Free-For-All National Tournament and took home $25,000.

"I think a lot of gamers can kind of relate to this, but I was almost using gaming as an escape," Potthoff says. "Being younger, my parents were divorced, and I had to split my time being at my mom's and my dad's houses, and the only way for me to connect with my friend was to play online. ...Over the course of those two years I just noticed I had some type of skill in playing, and I was just thinking a little bit more ahead and outperforming all my friends and my peers, and they were all talking about me at school."

Potthoff quickly found his game in Call of Duty. By 2012, just after the launch of Modern Warfare 3, he'd formed his own eSports squad, DeathWisH. He was 20.

"But then I realized that I wanted to go to college instead and try to make something for myself on the business side," Potthoff recalls. He kept playing Call of Duty while in college, but Potthoff focused on earning a bachelor's degree in business entertainment from Full Sail University. "My mindset going to school was to get my degree out of the way so I could focus on pro gaming," he says. Robert Morris University was the first school to offer an eSports scholarship in 2014, and today the National Association of Collegiate eSports (itself established in 2016) recognizes competitive gaming programs at more than 60 colleges nationwide, while many more schools have unofficial yet successful clubs. But in 2012, it was impossible for Potthoff to know how big eSports would become in just a few years. There was no stable career path toward playing games professionally, so going to college was viewed as a separate, responsible, pursuit.

If the scene back then had looked like it does today, Potthoff probably would have taken a very different route.

"To be honest, I think I might have skipped college," he says. "And I say that because salaries were just completely different back then. I mean, when I was 21 playing, I was only making $500 a month. I basically had to win tournaments to put food on a table for myself. And now these 17-years-olds, 16-year-olds are making just as much as I was when I was 21 and they have plenty of room to grow, and on top of what the pro players salaries are right now -- I mean it's just incredible to see that every year new deals and contracts are being made."

The eSports industry is stabilizing. Leading games like League of Legends and Overwatch have instituted minimum player salaries -- $75,000 a year for League and $50,000 for Overwatch -- a franchise system, and other protections for their young competitors. However, the industry is still fractured: Call of Duty, for example, doesn't have similar rules in place. This lack of stability has sparked tension between some players and Activision, the developer behind Call of Duty and the Call of Duty World League.

CoD eSports Will Be Dead By End Of 2020 https://t.co/ddxHsCrOuY via @YouTube

"We don't have any minimum salaries," Potthoff says. "We're essentially just obligated to show up. In a sense, they have made strides to have a pro league on a local area network setting, and they supply food and really good hospitality to the players while we're traveling. But in a scenario where they're involved with the contracts, making sure that players are getting paid this much or being treated this way or that way, that's not really existent."

After college, Potthoff played professional Call of Duty for roughly three years under the gamertag "Burns" and "Burnsoff." He achieved success and felt the sting of failure on a lineup of big-name teams, including Team Curse, Cloud9 and Team Liquid. It was his time on Team Liquid, combined with the lack of stability for teams in the CWL, that finally pushed Potthoff into retirement at the age of 24.

The CWL Pro League uses a points and relegation system, meaning all teams have to compete to secure long-term spots in the league, which this year will pay out $1.4 million across multiple events. Teams with the most Pro Points (earned by competing in CWL events) are invited to the Pro League. No organization is guaranteed a spot in the CWL, so each year, players can't bank on competing for part of this prize pool. League of Legends and Overwatch threw out the relegation system in favor of franchising last year, when they implemented minimum salaries.

In 2016, Potthoff helped Team Liquid qualify for the CWL Stage 1 Relegation round, where they faced off against another eSports powerhouse, H2K. In a best-of-seven tournament, Liquid won the first three games and needed just one more victory to earn a spot in the CWL.

H2K won the next four games.

"Winning that series would've really jump-started my career again, essentially," Potthoff says. "I would have gotten a nice raise. I would have been in a really safe spot for eight to nine months, but since I lost that series there was really nothing to play for for the next four or five months. I almost fell into a small depression where I didn't really want to play anymore because that choke was just so bad."

Potthoff competed in a few more tournaments but placed between the top 16 and top 24, not high enough to reignite his career.

"When you place between those placings three or four times you kind of know that your time is coming up," he says.

Potthoff was 24 years old. This is the same age that many people believe marks the decline of cognitive-motor functions essential for high-level eSports play, as cited in a 2014 study from Simon Fraser University in British Columbia. However, Potthoff doesn't buy into this study's conclusions.

"I don't think it's necessarily a skill issue," Potthoff says. "I truly believe it's a mindset issue. When pro players are playing games competitively -- yeah, they might be talking to girls or they might not really have a life, but when you hit 24, 25, you kind of start waking up and realizing that, 'Hey, I like to have fun on the weekends instead of playing games.'" Potthoff was growing up, and for him, that meant he'd grown out of the professional eSports-player lifestyle. In 2016, he joined eUnited and worked his way into a Head Coach position. Today, he's co-General Manager at eUnited, helping build and train teams, putting his college degree to work.

Now, when Potthoff is recruiting new talent -- including four underage players who recently signed to the team -- he tries to infuse balance into their lives.

"School and family always comes before eSports, and I will never make them travel outside of any of those obligations," he says. "But we are focused on the business side with them, on trying to grow them as players. Grow their talent. Have them kind of get a sense of what it's like to play against our veteran players and scrim."

When it comes to a career in eSports, Potthoff doesn't see any downside to diving in as early as possible. College isn't essential to succeed in the industry, and opportunities can pass players by in a heartbeat. There's a limited window for joining a professional team, he says, and starting early not only gives players time to hone their skills, but it also leaves them time to pursue other goals while they're still young, including school.

"I personally think they're in a really good spot because they are the only four underage gamers signed in a Call of Duty community," Potthoff says. "And with such a prestigious organization. We are trying to play our part to kind of jump-start their careers since they do want to apply all their efforts into becoming a pro player."

The 2018 CWL Pro League is underway and eUnited is in the thick of it. After eight weeks, the team has secured a spot in the Stage 1 Playoffs. EUnited will kick off the Playoffs in a match against Rise Nation today, April 6th, starting at 4PM ET. Potthoff won't be behind any of the controllers himself, but he'll still be there, behind the scenes.