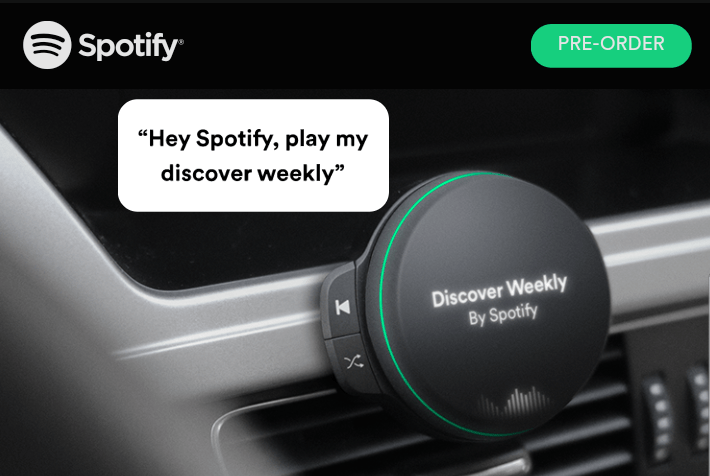 Rumors have been circulating that Spotify is working on some sort of hardware, possibly an in-car controller or a standalone player. As The Verge reports, a number of Reddit users have claimed to have received offers for the device, with plan price points ranging from $12.99 to $14.99 per month, but when they clicked the offer that appeared in the Spotify app, they were directed to an error page. Some have also reported that their offers noted that the device had 4G built in.

The player has also been brought up in Spotify support forums, with administrators saying it was a test or that they didn't have any news on such a product. According to screenshots of the offers, it appears that the device would also support voice control. Relatedly, Spotify began testing in-app voice search last month. Spotify declined to comment.

The fact that multiple people have received offers for this device suggests it's an actual product, though there's no telling when it might come out. There is a Spotify event scheduled for April 24th and the company says it will be making "a news announcement," but it hasn't given any hints as to what that might be.

Spotify officially went public this week with an unconventional IPO that was largely deemed a success.

Update 4/6/18 4:40PM ET: This post has been updated to include Spotify's response to our request for comment.

In this article: entertainment, gadgetry, gadgets, gear, MusicPlayer, services, spotify
All products recommended by Engadget are selected by our editorial team, independent of our parent company. Some of our stories include affiliate links. If you buy something through one of these links, we may earn an affiliate commission.