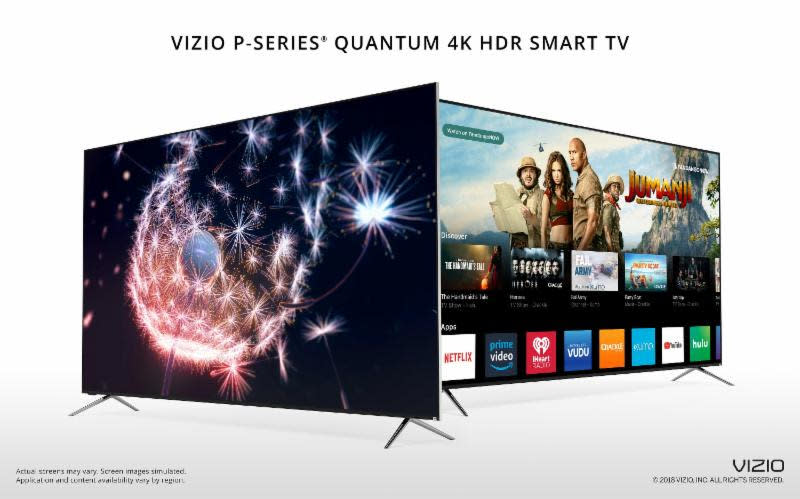 Today, Vizio announced a new flagship display, the 2018 P-Series Quantum 4K HDR Smart TV. It has up to 2,000 nits of peak brightness and is billed as Vizio's brightest TV so far. The bezel-less display also has an Active Full Array Max backlight with 192 local dimming zones for the company's "purest black levels." Quantum Color Spectrum technology means that this display can produce over one billion colors. A 240Hz refresh rate equals a natural, smoother picture. This 65-inch model is priced at $2,200.

Last year's P-Series had the same 240Hz refresh rates, but only 128 local dimming LEDs. Both have over one billion colors, but the peak brightness of this latest display appears to be much greater than the 500 nits of the previous year's line. In contrast, this year's M-Series features 600 nits of peak brightness, 48 dimming zones and a 60Hz refresh rate with a price of $1,000 for a 65-inch display.

The display also comes with Vizio's proprietary SmartCast OS, which features apps like Netflix, Prime Video and Vudu. Google Chromecast is also built directly into the display. Users can also take advantage of voice control thanks to Amazon Alexa and Google Assistant compatibility. We've been impressed in the past with Vizio's balance between great quality and a price point that won't break the bank, and this new flagship is no exception.

In this article: 4k, alexa, av, entertainment, gear, googleassistant, HDR, LedBacklit, p-series, quantum, smartcast, television, vizio
All products recommended by Engadget are selected by our editorial team, independent of our parent company. Some of our stories include affiliate links. If you buy something through one of these links, we may earn an affiliate commission.