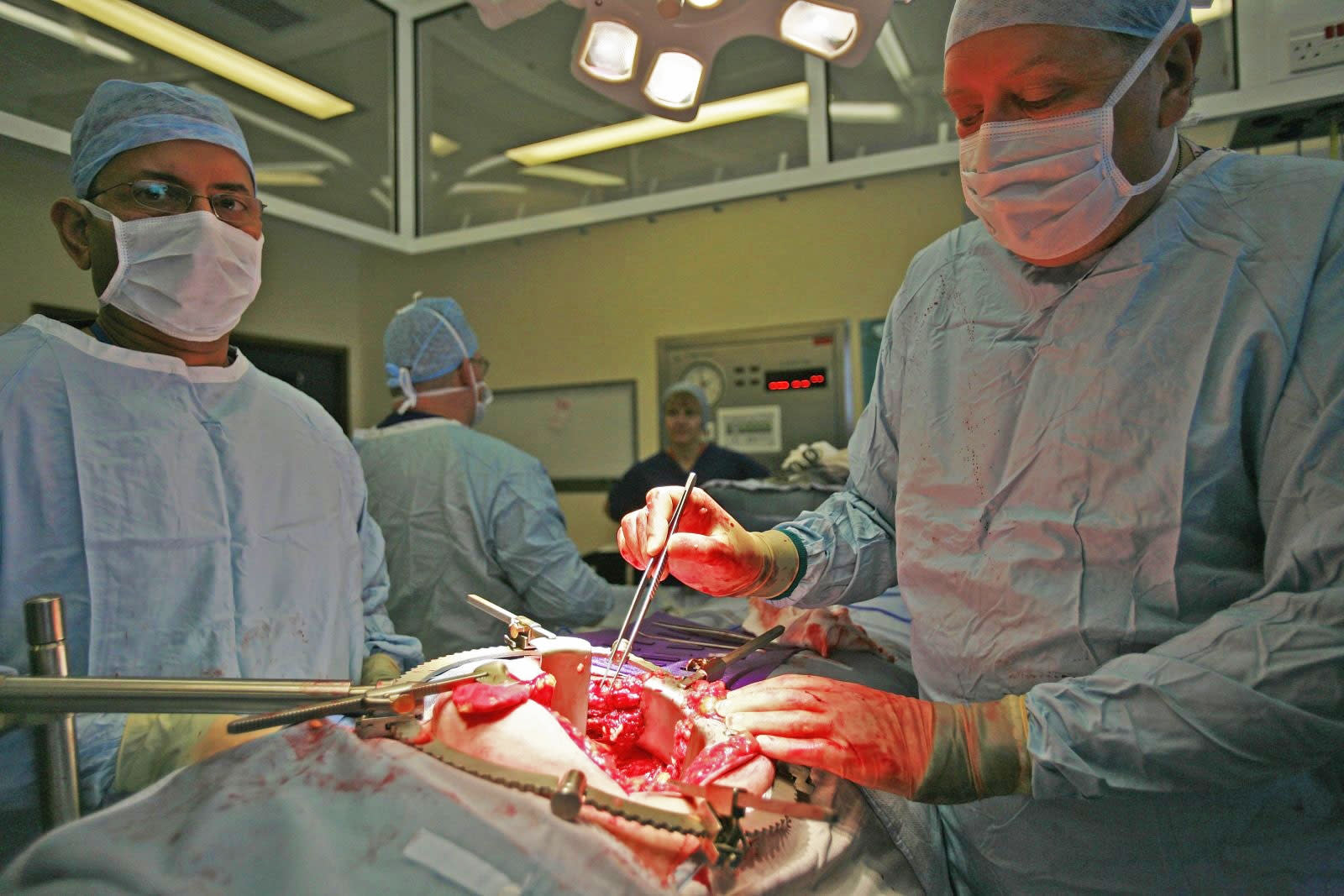 In the past half decade, medical science has made tremendous advances in reproductive organ transplant techniques. In the span of just four years, we've seen the first successful penile transplant, the first child born from a transplanted uterus, and as of Monday, the world's first full male genital transplant surgery. During the 14 hour marathon operation, a team of doctors from Johns Hopkins University grafted the penis and scrotum from a donor cadaver onto a US military member who had had his own genitals destroyed during his service in Afghanistan.

What's even more wild is that this isn't just a state of the art medical procedure, it's par for the course in terms of transplant technology. "Transplants are a very exciting field right now, very exciting time and there's a lot going on," Dr. Jonathan D'Cunha, Associate Professor of Cardiothoracic Surgery and Chief of the Lung Transplant Division at the University of Pittsburgh Medical Center, told Engadget. "It doesn't matter whether it's general urinary transplant or lungs or heart or liver, kidney, they all have different aspects or components to them which we're trying to push the field further and further."

D'Cunha cites the recent development of Ex Vivo Lung Perfusion (EVLP) technology, which is used to prevent donor lungs from swelling during transport, keeping them viable for longer periods of time.

"Many patients who are waiting for lungs or can't get a lung transplant because the donor supply is so limited," he said. "So we're always looking to improve things and expand the donor pool and new technologies are under development by many investigators to try to achieve this goal."

Typically, when a set of donor lungs become available D'Cunha's team first assess the organ's quality through the United Network for Organ Sharing system, Donor Net, and by reviewing medical imaging data like chest X-rays, CT scans or the bronchoscopy. UPMC will often then send out a team of specialists to inspect the donor organs in person "which is an expensive process," D'Cunha points out, "but nevertheless, that's the best way."

For questionable quality donor lungs, "that's where EVLP helps you in the assessment because you can harvest those lungs and bring them back to your institution, pump them, see how good they are, and decide whether to use them or not," he continued. But even with this advantage, D'Cunha explains that only around 20 percent of potential organ donations end up actually being used but that figure could likely be increased through a combination of technology and old fashioned outreach.

"Having the time to assess [donor organs] properly and make good judgments so you have a good patient outcome is absolutely critical," D'Cunha said. "Additionally, what the future may hold with things like Ex Vivo Lung Perfusion is the opportunity to even repair or intervene on lungs to make them better."

Turns out that the efficient transportation of an organ across the country isn't the most difficult part of its inter-person journey. "The biggest challenge, of course, is what the transplant comes to experience in the post-transplant care," Dr. Ron Gill, Professor of Surgery and Immunology at the University of Colorado, Denver and president of the American Society of Transplantation, told Engadget. "Unfortunately, with any kind of transplant, any kind of tissue or organ transplant from one person to another, the immune system recognizes as foreign."

"Since the 1980s we've used non-specific chemical immune suppression," he continued. "Basically, you inhibit the immune system globally in hopes that you'll keep from rejecting the transplant." That could soon change with the next generation of targeted therapies. "Instead of just suppressing the immune system, it's essentially guiding it," he said. "Because we know that the immune system essentially can be taught to accept new tissues as the being self," a process known as immunotolerance.

Of course, we could simply endaround the immune system entirely by leveraging stem cell and bioprinting technologies. We just have to wait for them to become commercially viable, is all. "We talk about something as complex as an actual organ," Gill said. "Or a kidney, like actually growing a kidney from a person's own cells, that's a real challenge."

Despite the potent possibilities promised by regenerative medicine, the field of study is still very much in its infancy. First developed in the mid-1990s, these techniques have to date only been used in a handful of transplant operations. In 2008, for example, a team of researchers from the Hospital Clínic de Barcelona successfully seeded a decellularised segment of donor trachea with a patient's own stem cells before implanting it into the patient himself. And, in 2014, a Japanese septuagenarian became the world's first recipient of cells derived from induced pluripotent stem cells when surgeons grafted a tiny sheet of retinal pigment epithelium cells into her eye to counter the effects of age-related macular degeneration.

So until those methods fully mature, we're going to have to rely on the existing organ donation infrastructure, though that too has been decimated by the implementation of transportation safety standards like seatbelts and bicycle helmets. To increase the viable donor pool, "I think that getting more awareness and more people signed up for organ donation is the number one thing we can do to ensure that we're just getting more opportunities," D'Cunha said.

"The area to change in the future is living donor transplantation. For a long time we've not only been relying on cadaveric donors but also living donors for kidneys and that's extended now into liver transplants," Gill continued. "So that expands through the expansive number of transplants that can be done, because we know numerically the biggest problem with transplantation isn't even the transplant. It's the waiting list."

"I think that education, awareness, potentially even changes in policies towards organ donations," D'Cunha said, "those are all things which really could have a huge impact on how lungs and other organs are allocated to patients in need."

"If you think about it, if you had 100 patients who passed away and you could only use 20 lungs out of those 100 patients, for example," he continued. "If you could increase the number of donors to 200, all of a sudden you're talking about 40 lungs, which is double the number of lungs."

In this article: EVLP, medicine, organ, organtransplant, RegenerativeMedicine, stemcells, surgery, tomorrow, transplant
All products recommended by Engadget are selected by our editorial team, independent of our parent company. Some of our stories include affiliate links. If you buy something through one of these links, we may earn an affiliate commission.