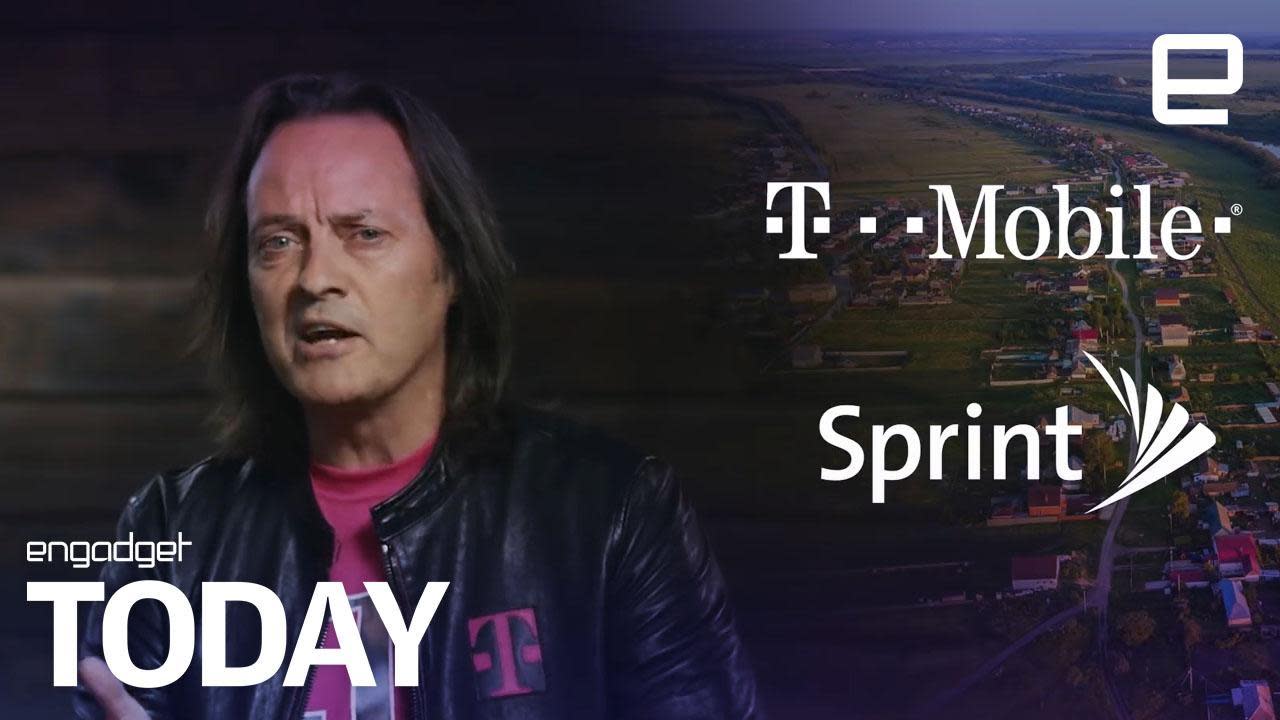 After years of on-again, off-again talks, it's official: T-Mobile and Sprint have announced plans to merge. The all-stock, $26 billion deal values Sprint at $59 billion (the combined company would be worth $146 billion) and will give T-Mobile the reins, with the carrier's John Legere serving as CEO and Mike Sievert continuing to operate as COO. Sprint chief Marcelo Claure will serve on the board of directors alongside Masayoshi Son, the CEO of Sprint's parent company SoftBank. As for the ostensible reason for the merger? If you ask the networks, it's all about 5G.

The two claim they can roll out a "broad and deep" 5G network faster together than they would by themselves. They also try to head off concerns about reduced competition by claiming that the 5G landscape involves a lot more than just mobile, as you primarily saw with LTE and earlier technologies. As 5G is becoming useful for fixed broadband, the unified T-Mobile and Sprint would ostensibly compete against cable providers like Comcast and Charter in addition to wireless giants AT&T and Verizon.

There's a degree of truth to these claims. In addition to varying coverage maps, the two have wide swaths of wireless spectrum that only sometimes overlap (Sprint has the 800MHz and 2.5GHz bands, for example, while T-Mobile has 600MHz and 700MHz). You could see more comprehensive coverage. And there's no question that 5G's gigabit-class bandwidth and low lag make it more of a viable option for fixed internet access. The first 5G deployments are focused on replacing broadband, not upgrading the smartphone in your hands.

It's not yet clear how this would affect sub-brands like MetroPCS, Boost Mobile and Virgin Mobile.

If regulators clear the deal, it should close "no later than" sometime in the first half of 2019. However, that's a big "if." While the current US government is typically anti-regulation, it hasn't exactly been kind to telecom-related mergers -- just ask AT&T how its Time Warner merger is going. And it's hard to escape flashbacks to 2011, when officials shot down AT&T's attempt to buy T-Mobile amid widespread fears of reduced wireless competition. T-Mobile and Sprint have maintained that their unified company will actually produce more jobs (T-Mobile points to the wake of its MetroPCS acquisition as evidence), but large companies always claim this. Regulators will want to see proof that the combined entity won't promptly slash thousands of jobs in the name of eliminating overhead.

Is this a good deal? It's hard to say at this early stage. While this would unfortunately reduce the US to just three major cell carriers, the existing situation wasn't exactly utopian. T-Mobile has been growing briskly in the past five years, more than doubling its subscriber base, but it still has 'just' 39 million total customers to AT&T's 89.3 million consumers and Verizon's 116.2 million connections (this includes some fixed wireless users). And while Sprint has been recovering from its worst days, it's still growing slowly and bleeding cash with 54.6 million users across its various brands. A merger could create a third company on the same scale as AT&T and Verizon, forcing the incumbents to offer more competitive pricing... that is, assuming T-Mobile and Sprint don't use the merger as an opportunity to rest on their laurels.

In this article: 5g, acquisition, AOLoriginals, boostmobile, business, carrier, DailyShow, Engadget, EngadgetToday, EngadgetVideo, entertainment, gear, johnlegere, merger, metropcs, mobile, sprint, t-mobile, video, virginmobile, wireless
All products recommended by Engadget are selected by our editorial team, independent of our parent company. Some of our stories include affiliate links. If you buy something through one of these links, we may earn an affiliate commission.