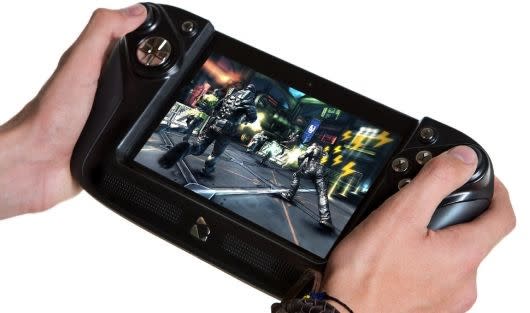 Nintendo is under investigation by the US International Trade Commission, and the fate of the Switch hangs in the balance. Gamevice, the company behind the Wikipad and a line of snap-on controllers for mobile devices, says the Nintendo Switch violates its patents on attachable handheld gamepads and their related accessories. Alleging violations of the Tariff Act of 1930, Gamevice is requesting a cease and desist order against Nintendo, a move that would halt imports of the Switch into the US.

The USITC notes that while its investigation has begun, it hasn't ruled on the validity of the complaint. The commission will hold an evidentiary hearing to determine whether Nintendo is in violation of the Tariff Act, with a final decision "at the earliest practicable time." The USITC will announce a target date for the end of the investigation within 45 days.

"The products at issue in the investigation are controller systems with parts that attach to two sides of an electronic device, such as a smartphone or tablet, and the parts fit into a user's hands and have gaming controls," the USITC's announcement reads.

Nintendo declined to comment on the investigation. We've reached out to Gamevice and will update this story as we hear back.

This isn't the first time Gamevice and Nintendo have gone head-to-head over the Switch. In August, Gamevice sued Nintendo for violating its Wikipad patents with the Switch, but that lawsuit was dropped in October.

For the record, Gamevice doesn't hold a patent on cardboard-based video game accessories. Nintendo's grip on that market is secure, at least.

In this article: business, design, gamevice, gaming, nintendo, nintendoswitch, switch, usitc, wikipad
All products recommended by Engadget are selected by our editorial team, independent of our parent company. Some of our stories include affiliate links. If you buy something through one of these links, we may earn an affiliate commission.