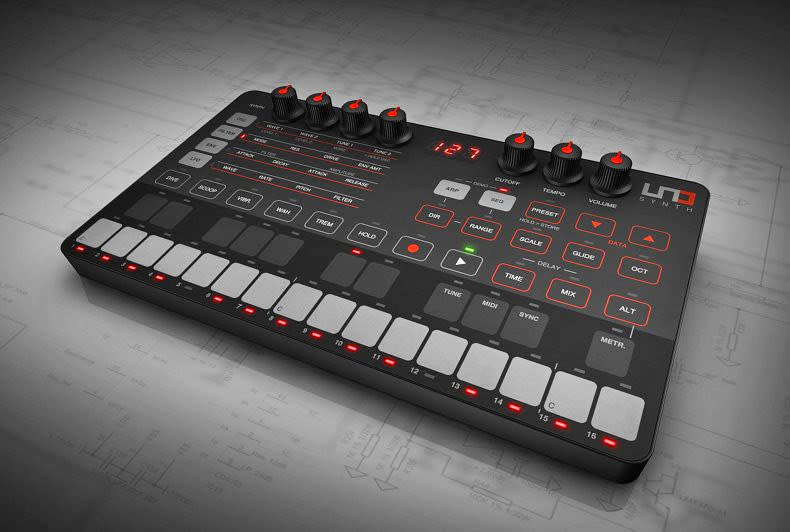 The company's own Erik Norlander (one of the designers behind Alesis' Andromeda synth) collaborated with Italian boutique synthesizer maker Soundmachines to create the Uno. The device has a small footprint, though it packs a ton of manual controls for easy programming. It's made to serve both newbies and veterans: Uno has a two octave touch-sensitive keyboard and 100 different presets, along with selectable scales and an arpeggiator to make getting up and running easy.

Underneath it all is a powerful synth engine with an all-analog audio path. It has two independent voltage-controlled oscillators (VCOs) with saw, triangle and pulse waveforms, a noise generator, and a multimode voltage-controlled filter (VDF) and amplifier (VCA). The Uno also has seven low-frequency oscillators (LFOs) that modulate pitch, filter, amplification and wave shapes to create all those cool deep monophonic synth sounds in the video below.

The 40 onboard controls let you tweak your sounds on the fly, but there's also a Mac/PC editor if you want to create your sounds before heading out to the club. The keys have 27 notes that can be played as a regular chromatic keyboard or as a predefined scale board, with 13 different scales available. The arpeggiator has 10 different modes and a four octave range. The keyboard also doubles as a controller surface for the built-in sequencer. You can use it to program sequences in real time or in steps, making the Uno a pretty useful bit of gear for its price. Uno is battery- or USB-powered, like many of IK Multimedia's instruments, and can be used on its own or as a MIDI controller, as well. You can even connect other audio devices to Uno (like a drum machine) via the included audio interface.

The Uno is available for pre-order now, and will ship to customers in July of this year for a fairly inexpensive $200.

In this article: analog, av, gear, IkMultimedia, keyboard, Mac, midi, monophonic, music, PC, synth, synthesizer, uno, video
All products recommended by Engadget are selected by our editorial team, independent of our parent company. Some of our stories include affiliate links. If you buy something through one of these links, we may earn an affiliate commission.