The new Google Maps is more than just a Yelp alternative

Thanks to the company's vast wealth of data and a super-nifty Group Planning feature, the new Maps is extremely compelling.

Google announced so much stuff at I/O 2018 that there was barely enough time to cover them all. In addition to new Android P features, a "Digital Wellbeing" initiative and all manner of AI and accessibility improvements, the company also unveiled a redesigned Maps app that might change the way we explore places. I checked out a demo of the new app with Maps product lead Sophia Lin, and frankly can't wait till the new features roll out this summer.

Google knows a ton of stuff about its users -- where they're frequenting, what they're searching for and the places they've rated highly. Most of the changes to Maps will tap that data to show you more meaningful content, in each region you're looking up, whether it's your neighborhood or a new city you're researching.

Before we go into all that though, I want to go over my favorite of the new features: Group Planning. When you're searching for places to go to, like a hotpot restaurant, for example, you can long-press each result in the new Maps app to create a shortlist. After your first long-press, a badge similar to the Messenger chat heads on Android pops up on the side of your screen, with a number indicating how many items have been added to the list.

Once you're done picking your candidates, you can tap the badge to bring up your list. From that page, you can share your selection with your friends, and they can upvote and downvote each option. You can also switch between a list view and maps view. The latter makes it easier to see your proximity to each location, so you can factor that into your decision.

It's nice to see how straightforward this feature is, but most heartening is the fact that this actually solves a problem that plagues many of our lives. No longer will I have to create multiple chat groups for all the friends I'm arranging dinners with, and it will simplify the decision-making process. I might even go out with groups of friends more when this feature rolls out.

On to the first change you'll see in the new Maps: the redesigned Explore tab. When you open up the app, you'll see lists of things people typically look for in the area you're in. On Lin's phone, the app showed lists for soul food, live music and rooftop bars -- apparently things that Google users have been searching for in San Francisco.

Tapping each of these cards brought up a list of related places and a progress bar tracking how many items on the list Lin had been to. On a list of "Best slices of pie in SF," for instance, Lin's progress bar showed she had visited three of the seven total places. It's not a super-useful tool, but it's a fun way to encourage people to get out and visit more different places in their neighborhood.

There will also be recommendations for popular places under a section called Trending This Week, which Google curates by aggregating content from "trusted publishers like The Infatuation," algorithmic data from its existing Trending Weekly list and where users have been visiting. Google identifies a group of its users as "foodies" -- people who frequent highly rated restaurants -- and pays closer attention to the places they go to. If the system finds that many foodies have been going to a particular establishment, it will recommend these to you, too.

The thing about ratings in search results is they're based on what the general population thinks and may not apply to your tastes. The new Maps will have a For You tab that pulls up a page with recommendations tailored to you based on your preferences. This isn't just about restaurants, either. For You will recommend Events and Activities as well. Lin explained that the difference between those two is that Events are more ephemeral, one-off happenings like concerts or gallery openings, whereas Activities are regularly available, like dog parks or book clubs.

Another personalized feature is something called your Match score. If you've searched for new restaurants and can't decide between a 4.2 star-rated spot or a 4.3-rated one, your Score will be particularly useful. Google's algorithm uses your preferences, previous reviews and ratings, but also places you frequent to understand your taste.

That means if you've opted in to location tracking, and you go to, say, Serafina or Don Giovanni's every week, Google will learn that you like Italian food even without you actively rating those places. You can also enter your preferences for things like healthy food or Greek food, and Google will assign a higher Score to places with cuisine or menu items similar to places you like.

In our demo, Lin showed me a list of restaurants that indicated both a general user rating out of five stars, as well as a Scores out of 100 for each. Some places on the list had lower star ratings, but higher personal scores, which seems to indicate that she might prefer the lower rated option. I can see this being useful for people with particular tastes (read: picky eaters) who may not find general user ratings accurate for them. But until the new Maps is live, I can't tell how accurate or effective the personal recommendations will be. I'm excited for Google to understand my fondness for spicy food and suggest more Szechuan restaurants, though. 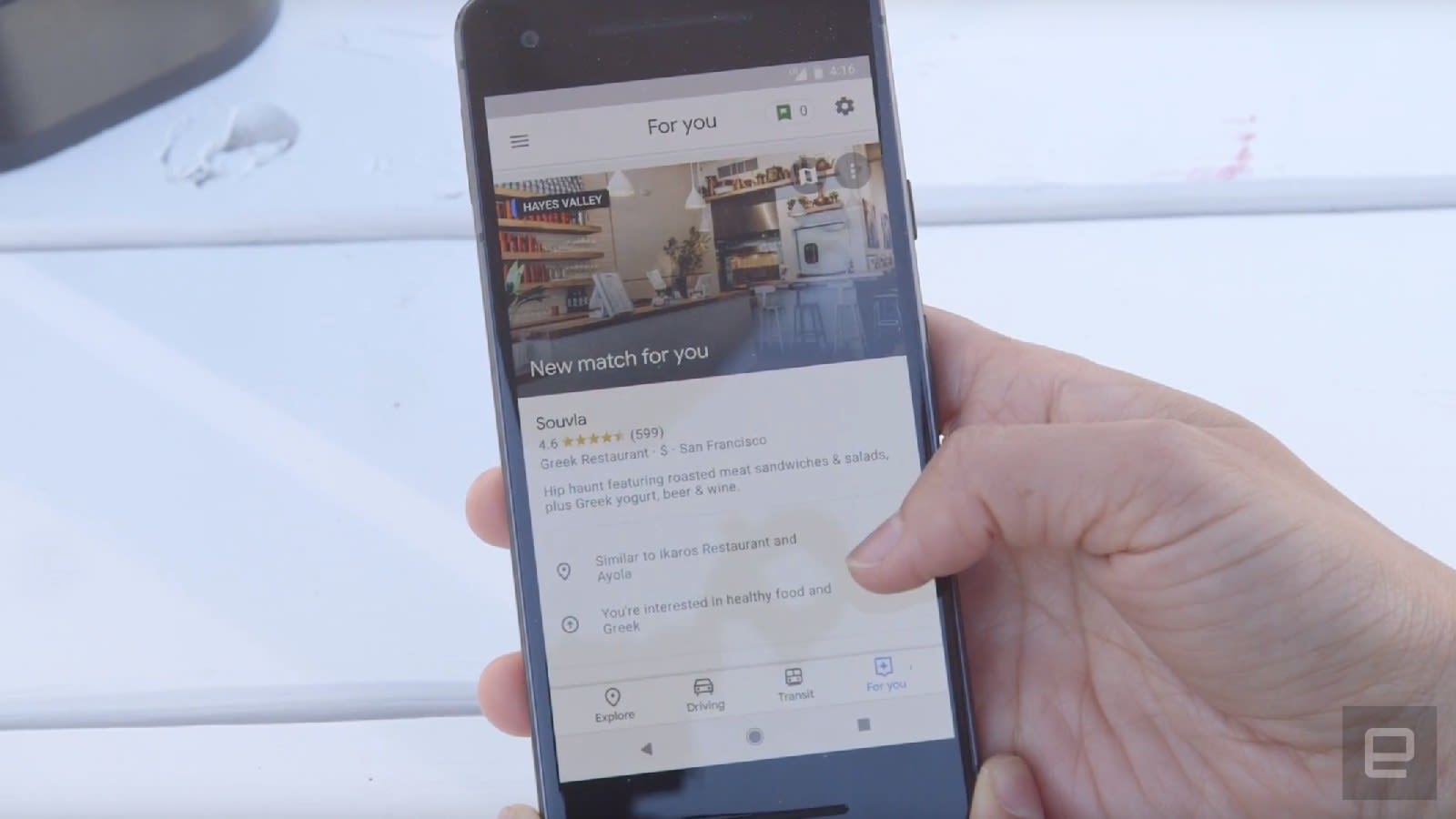 One of the most exciting new Maps or AR features that Google teased at its keynote was AR navigation -- using your camera to figure out which direction you should turn next. This unfortunately wasn't available during our demo, so we'll have to wait a little longer to check that out.

Meanwhile, I'm already excited by all the changes coming to Maps. It doesn't feel like a simple amalgamation of Yelp reviews and Facebook events; this seems like a thoughtful approach that is rooted in understanding each user's personal preferences. It might not change our lives the way Maps has made exploring foreign places much easier, but it definitely has the potential to be a very useful update.