HP unveils a slew of new Envy and Elite PCs

Don't complain about a lack of choice.

For HP's latest batch of premium Envy and Elite devices, the company is basically focused on refining its winning formulas. There's faster hardware, of course, as well as a few tweaks to differentiate the new lineup. Don't expect many surprises, though. HP has built up a reputation over the years for delivering reliable machines at a decent price. And with the Envy and Elite lines, in particular, it's not trying to push the needle too much (that's what the Spectre machines are for).

First up, there are new Envy 13 and 17 notebooks. They're pretty much straightforward ultraportables -- the sort of things you'd consider if you don't want unique features like rotating displays. This year, HP managed to reduce the size of the top screen bezel by 31 percent, while also making room for a webcam up top. Both models feature 8th Generation Intel Core CPUs, NVIDIA GeForce MX150 graphics (optional on the 13-inch), and either 1080p or 4K screens. Less functional, but sort of cool, they also sport new Damascus knife patterns along their back edges.

As for convertibles, there's the new Envy x360 15, which features similar design upgrades. You can choose from Intel or AMD Ryzen CPUs, GeForce MX 150 or Radeon Vega graphics, and 1080p or 4K screens. HP is also introducing an AMD Ryzen version of the Envy x360 13 with a Vega GPU. Both machines feature the company's Sure View technology, which blocks your screen from being viewed at an angle. It's a useful feature if you have to work on confidential material in public, but be prepared for a bit of a brightness hit when you flip it on. 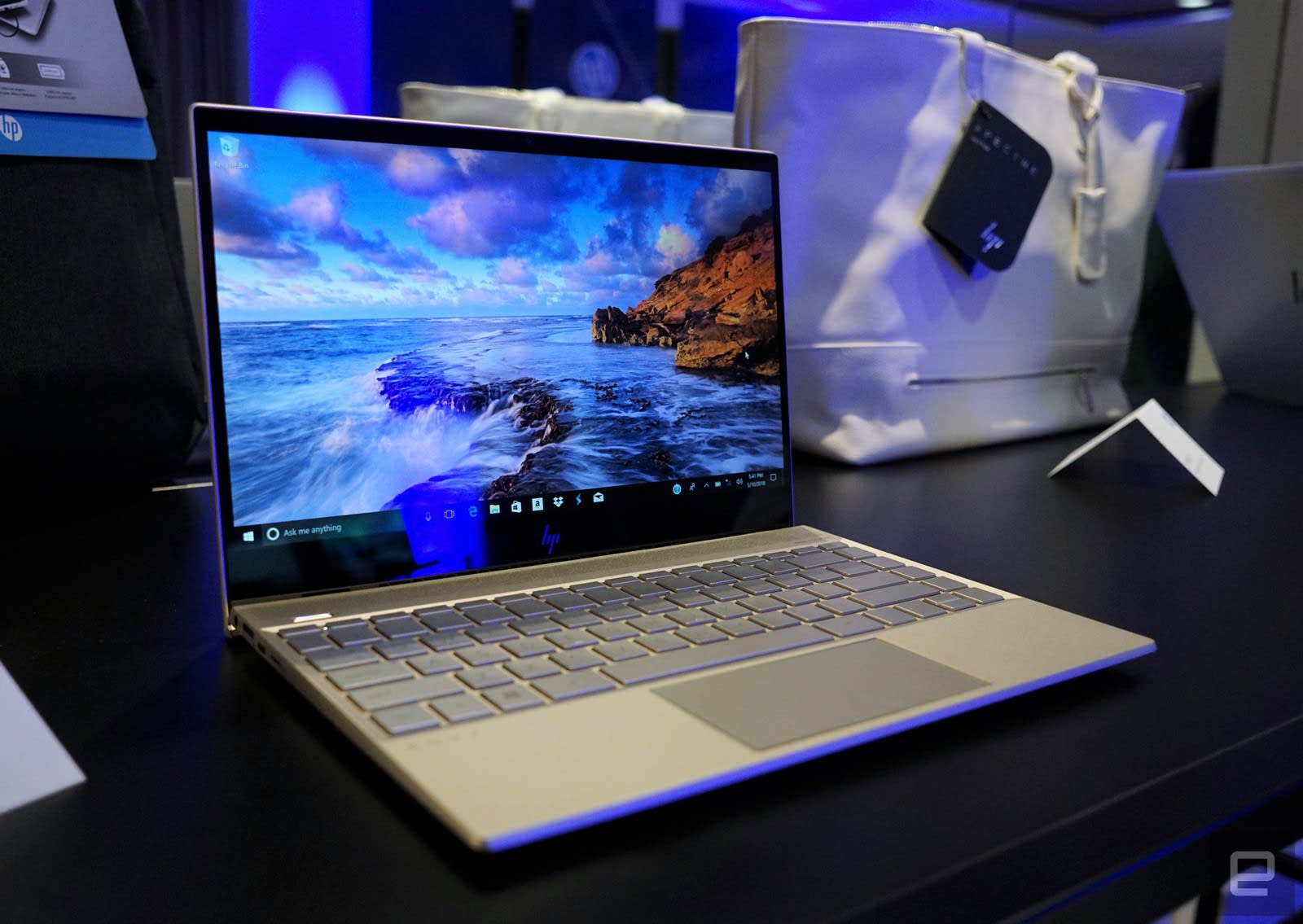 If you're looking for devices aimed more at professionals, that's where HP's Elite lineup comes in. The EliteBook 1050, for example, is a slim notebook that features NVIDIA GeForce GTX 1050 graphics (a first for this market, according to HP). Once again, you can choose from 1080p and 4K resolutions for its 15.6-inch screen. The EliteBook's six-core Intel processor is more powerful than what you'll find in the Envy lineup, and it also supports up to 4 terabytes of SSD storage (with RAID support). While it's a bit hefty at 4.5 pounds, it's lighter than most of HP's ZBook workhorse machines.

The EliteBook x360 1030 is a more compact and foldable alternative. HP claims it's the smallest business convertible around, weighing in at 2.7 pounds (to start) with a 13.3-inch 4K screen. You've only got integrated graphics to choose from, but that's no surprise given its size. At least it packs in HP's Sure View, as well as the option of a bright 700 nit monitor, which is ideal for viewing in direct sunlight. You can also add optional LTE support so you're always connected. 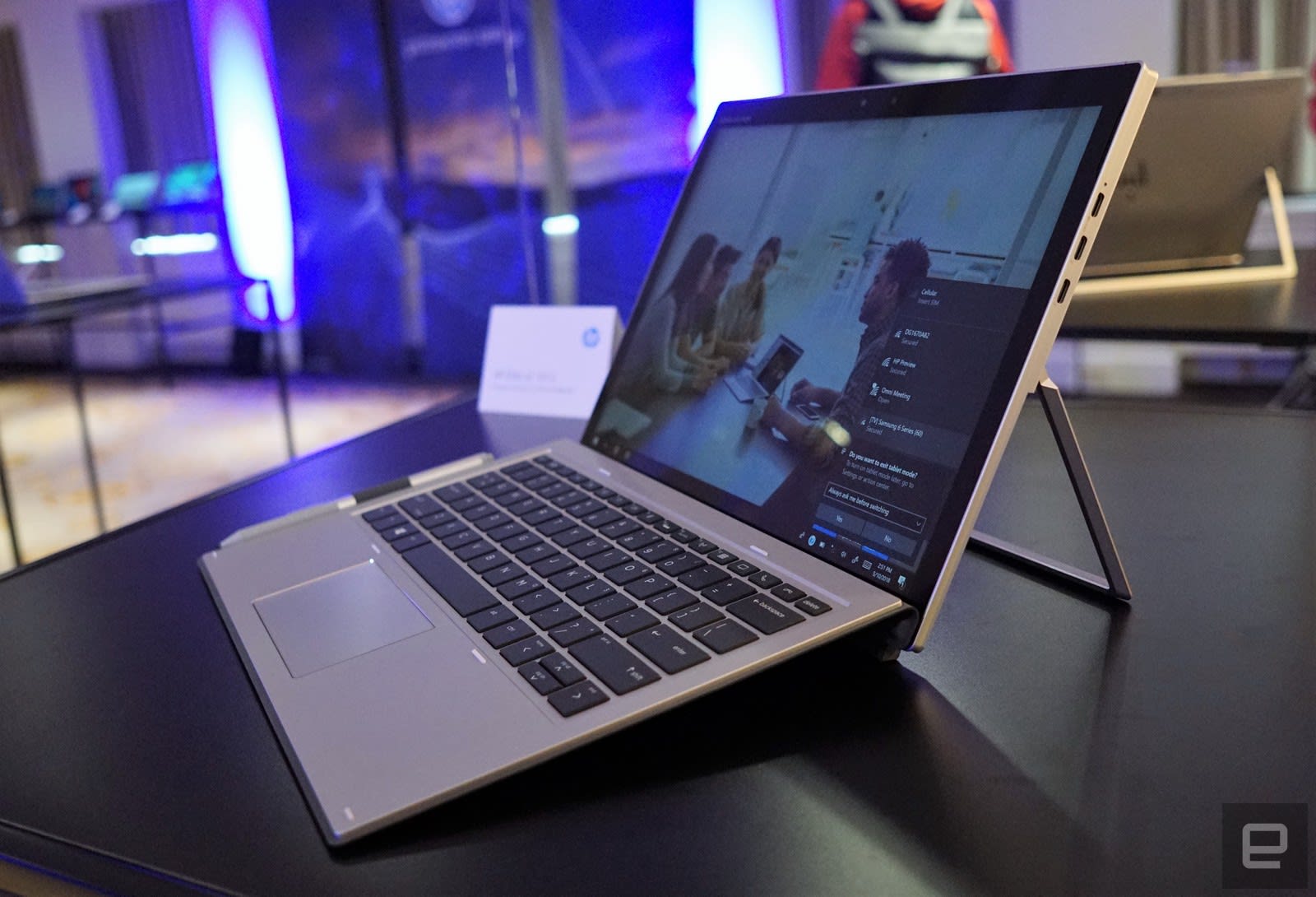 HP's Surface Pro competitor, the Elite X2, also makes a return. This time, it has a a quad-core 8th gen Intel CPU, optional LTE and 39 percent thinner bezels. You can detach the 13-inch screen from the keyboard to use it as a tablet, as you'd expect. It doesn't really change up the detachable formula, but it looks like a solid option if you're into HP's aesthetic. You can also add the Sure View tech, which makes it an ideal airplane workhorse. 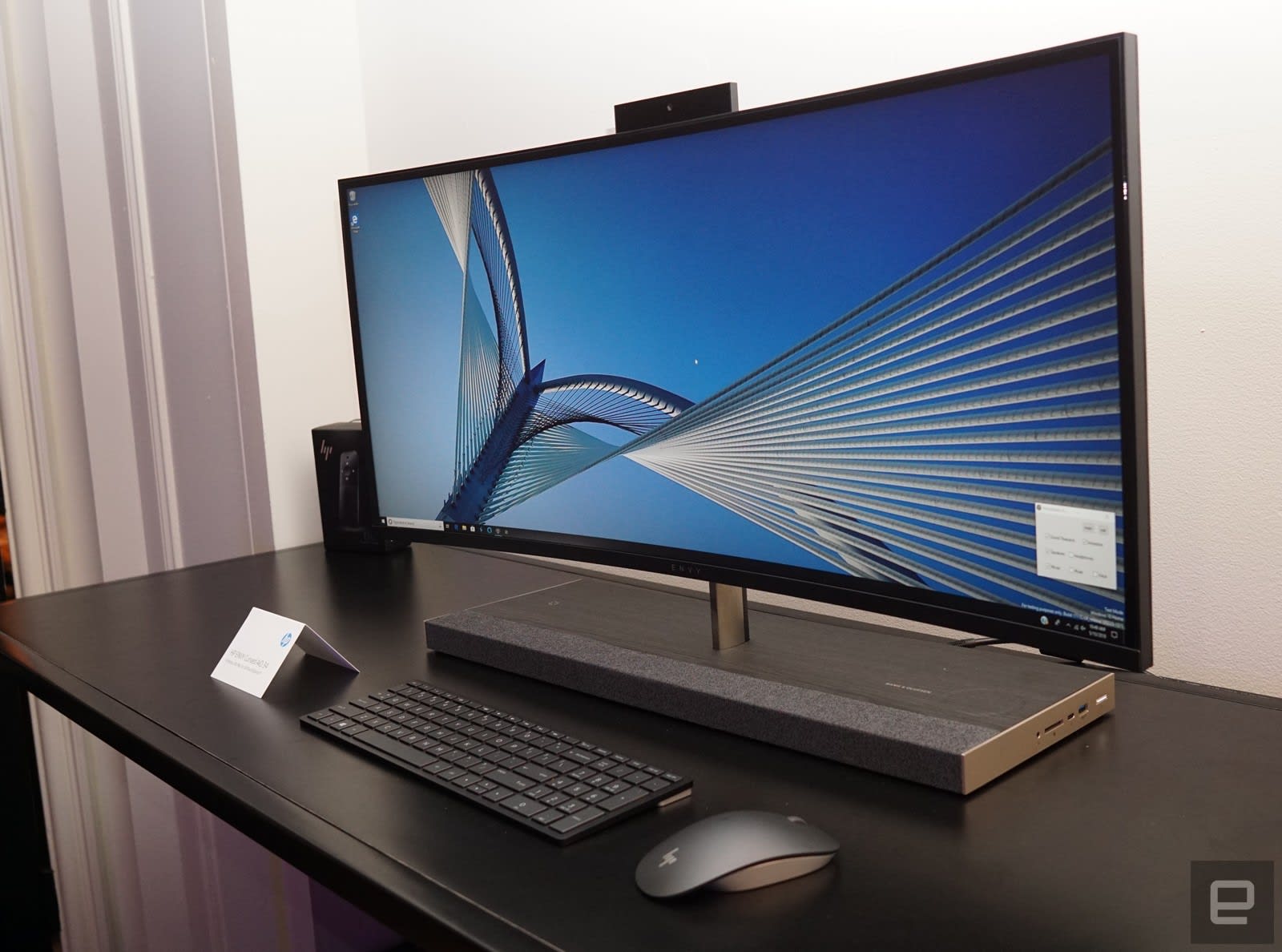 HP hasn't forgotten about all-in-ones and desktops, either. The new Envy AiO 27 and Envy Curved AiO 34 both sport a new design, which makes the monitors look like they're almost floating in the air. They also feature built-in Amazon Alexa support and NVIDIA GTX 1050 graphics, as well as larger speakers and wireless phone charging integrated into their bases. The EliteOne 1000 AiO, meanwhile, is meant for collaboration and video conferencing. You can choose from 23.8-inch to 34-inch ultrawide screens, and either integrated graphics or AMD's Radeon RX 560. And for the old school types, there's a new Envy Desktop sporting a stylish minimalist look, 8th gen Core CPUs and up to GeForce GTX 1050 graphics.

Of course, with new machines come all sorts of refreshed accessories. The EliteDisplay S14, for example, is a 14-inch 1080p USB-C monitor, which is meant to be a secondary screen for laptops. It's coming in July starting at $219. There's also a second generation of HP's Thunderbolt dock, which can power dual 4K displays and work as a speakerphone. It's a unique spin on an increasingly boring accessory segment, but unfortunately there's no pricing or availability details yet.

All products recommended by Engadget are selected by our editorial team, independent of our parent company. Some of our stories include affiliate links. If you buy something through one of these links, we may earn an affiliate commission. All prices are correct at the time of publishing.
HP unveils a slew of new Envy and Elite PCs
gadgetry
gadgets
gear
hp
personal computing
personalcomputing