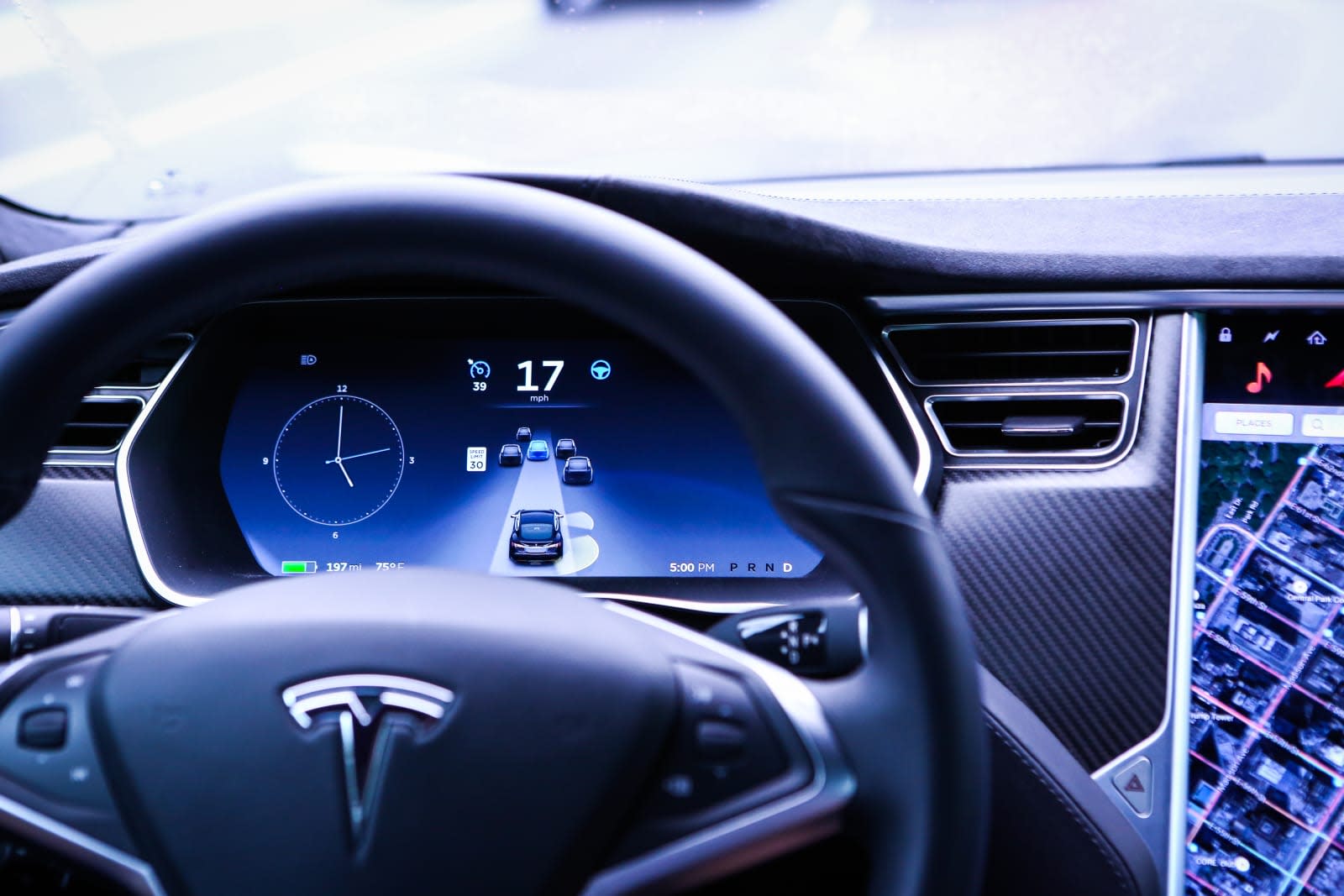 Tesla engineers considered incorporating additional safeguards into the company's Autopilot driver assistance system such as eye-tracking technology or steering wheel sensors, the Wall Street Journal reports, but those features were ultimately rejected due to concerns over cost and effectiveness. Both before implementing the system and again following a fatal crash in 2016 that involved what appeared to be an overreliance on Autopilot, Tesla executives explored ways to ensure drivers were looking at the road and touching the steering wheel, according to WSJ sources. However, eye-tracking technology was called into question both for the costs associated with the required cameras and sensors as well as for concerns on how well it would work with drivers of different heights. Cost concerns also led to a rejection of steering wheel sensors.

"It came down to cost, and Elon was confident we wouldn't need it," a source told the WSJ. Tesla CEO Elon Musk, however, refuted the accusations, tweeting today that eye-tracking was ultimately rejected because it was ineffective, not because of costs. Musk also said that Tesla is the safest car available, though none of its models are included in recent Insurance Institute for Highway Safety top picks.

This is false. Eyetracking rejected for being ineffective, not for cost. WSJ fails to mention that Tesla is safest car on road, which would make article ridiculous. Approx 4X better than avg.

Along with the 2016 crash in Florida, a fatal accident that occured in March also involved Autopilot and Tesla said the driver ignored several visual and audible warnings ahead of the crash. In its report about the 2016 crash, the National Transportation Safety Board said, "The way that the Tesla Autopilot system monitored and responded to the driver's interaction with the steering wheel was not an effective method of ensuring driver engagement." And Musk himself has noted that drivers may get too comfortable with Autopilot. Earlier this month, he said during a call with analysts, "When there is a serious accident, it is almost always, in fact, maybe always the case, that it is an experienced user. And the issue is...more one of complacency, like we get too used to it."

Last month, a Tesla owner was given an 18-month driving ban in the UK when he was found sitting in the passenger seat after activating Autopilot in his moving vehicle.

Other companies have opted for eye-tracking features, however. Cadillac's 2018 CT6 sedan comes with the carmaker's hands-free driving Super Cruise technology, which tracks your eyes and other facial features to make sure you're paying attention to the road and not something else.

In a statement, a Tesla spokesperson said:

Everyone at Tesla is not only encouraged, but expected, to provide criticism and feedback to ensure that we're creating the best, safest cars on the road. This is especially true on the Autopilot team, where we make decisions based on what will improve safety and provide the best customer experience, not for any other reason.

Ensuring that drivers stay engaged and alert when using Autopilot is extremely important. That is why we designed the system to deliver an escalating series of visual and audio warnings reminding the driver to place their hands on the wheel. That's also why we've taken so many steps to improve this process over time, including an update that prevents a driver from re-engaging Autopilot if they ignore repeated warnings. We've explored many technologies and opted for the combination of a hands-on-wheel torsion sensor with visual and audio alerts, and we will of course continue to evaluate new technologies as we evolve the Tesla fleet over time.

Tesla Autopilot does not prevent all accidents -- such a standard would be impossible -- but it makes them much less likely to occur. If you are driving a Tesla equipped with Autopilot hardware, you are 3.7 times less likely to be involved in a fatal accident.

In this article: autopilot, cadillac, design, ElonMusk, EyeTracking, gear, safety, sensor, SteeringWheel, SuperCruise, tesla, transportation
All products recommended by Engadget are selected by our editorial team, independent of our parent company. Some of our stories include affiliate links. If you buy something through one of these links, we may earn an affiliate commission.