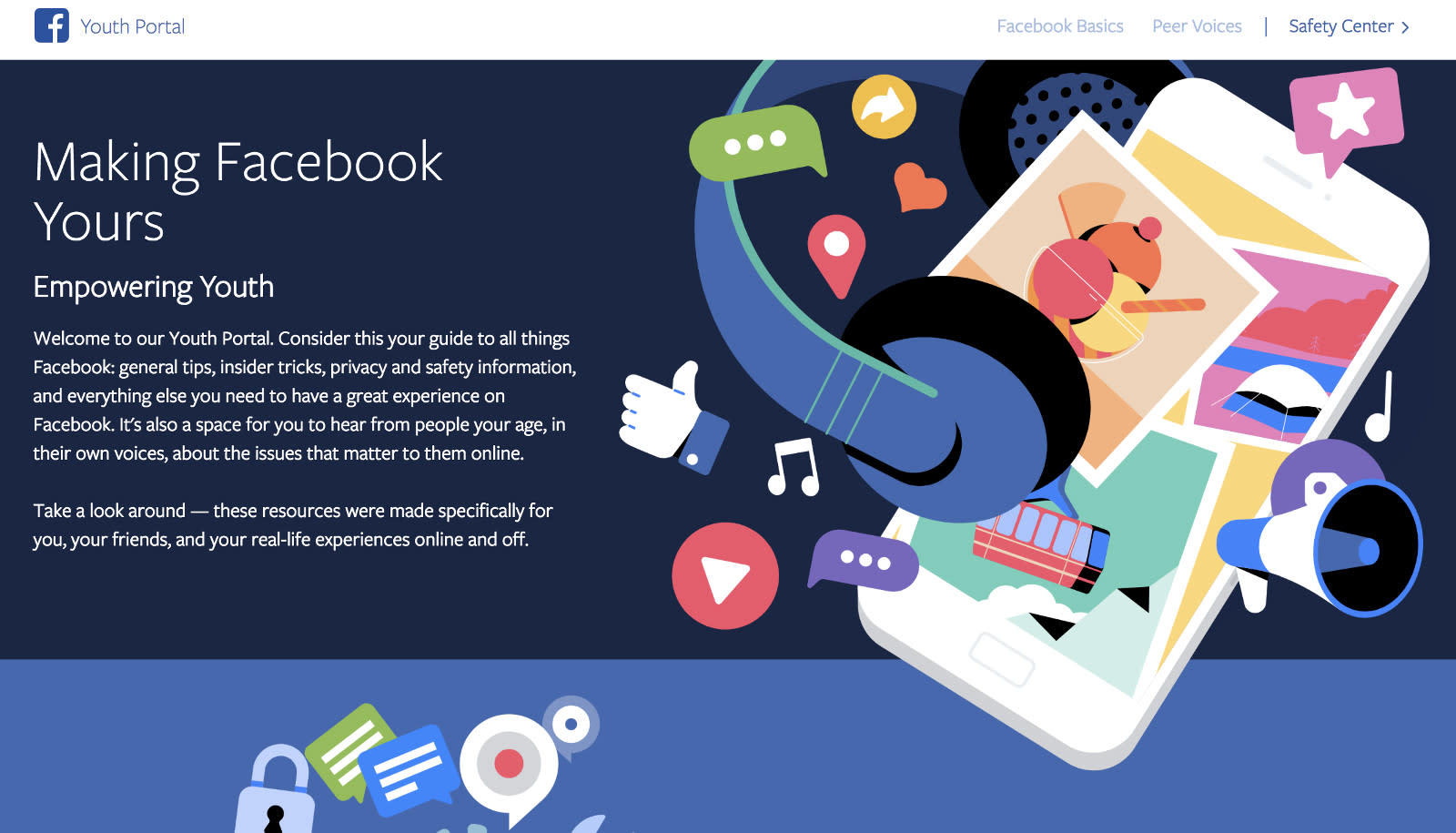 Facebook and other social networks can be a pretty toxic place for kids and teens, with at least one study coming to the conclusion that they deepen young people's feelings of inadequacy. Today, the social network has launched a Youth Portal, which it says provides a "guide to all things" teens need "to have a great experience on Facebook." It covers the basics all Facebook users (not just young people) need to know, including privacy measures such as activating two-factor and using strong passwords, as well as tips on how to spot scams. However, it also doles out advice for teens and contains information on how the website uses their data.

Under a section called "Guiding Principles," Facebook advised young users to think (for 5 seconds) before they post publicly. "There will always be people at your school who are social media oversharers (and adults in your life who are, too). Resist the urge, ignore their noise and save the juicy details for your close friends only," Liz Perle, the social media's youth and emerging trends consultant wrote.

Perle advised teens to say something if a friend posts anything that makes them feel uncomfortable, to talk to someone if there's anybody in their friends list who's making them feel bad about themselves or if using Facebook is making them feel sad or stressed out in general. And for those doing the bullying, one of her other tips is "don't be a jerk" -- "Whatever energy you put out in the world, you'll get back," she wrote.

The portal also has a Privacy section that explains, in simple terms, how Facebook uses people's data to improve its services and to figure out which ads to show. It explains how it shares data with researchers, vendors, advertisers and law enforcement in the face of legal requests from authorities. "We don't sell your content or data," that section reads, as if in defense of its data privacy issues. "We never have, and we never will. You will still own your photos and videos."

Facebook said it spoke with teens from the UK, US, Italy and Brazil to build the portal and that it's holding more roundtables in the future to hear more from its younger users. The Youth Portal is now live and available in 60 languages, making it pretty accessible to teens around the world.

In this article: facebook, gear, internet, socialmedia, SocialNetworking, youthportal
All products recommended by Engadget are selected by our editorial team, independent of our parent company. Some of our stories include affiliate links. If you buy something through one of these links, we may earn an affiliate commission.