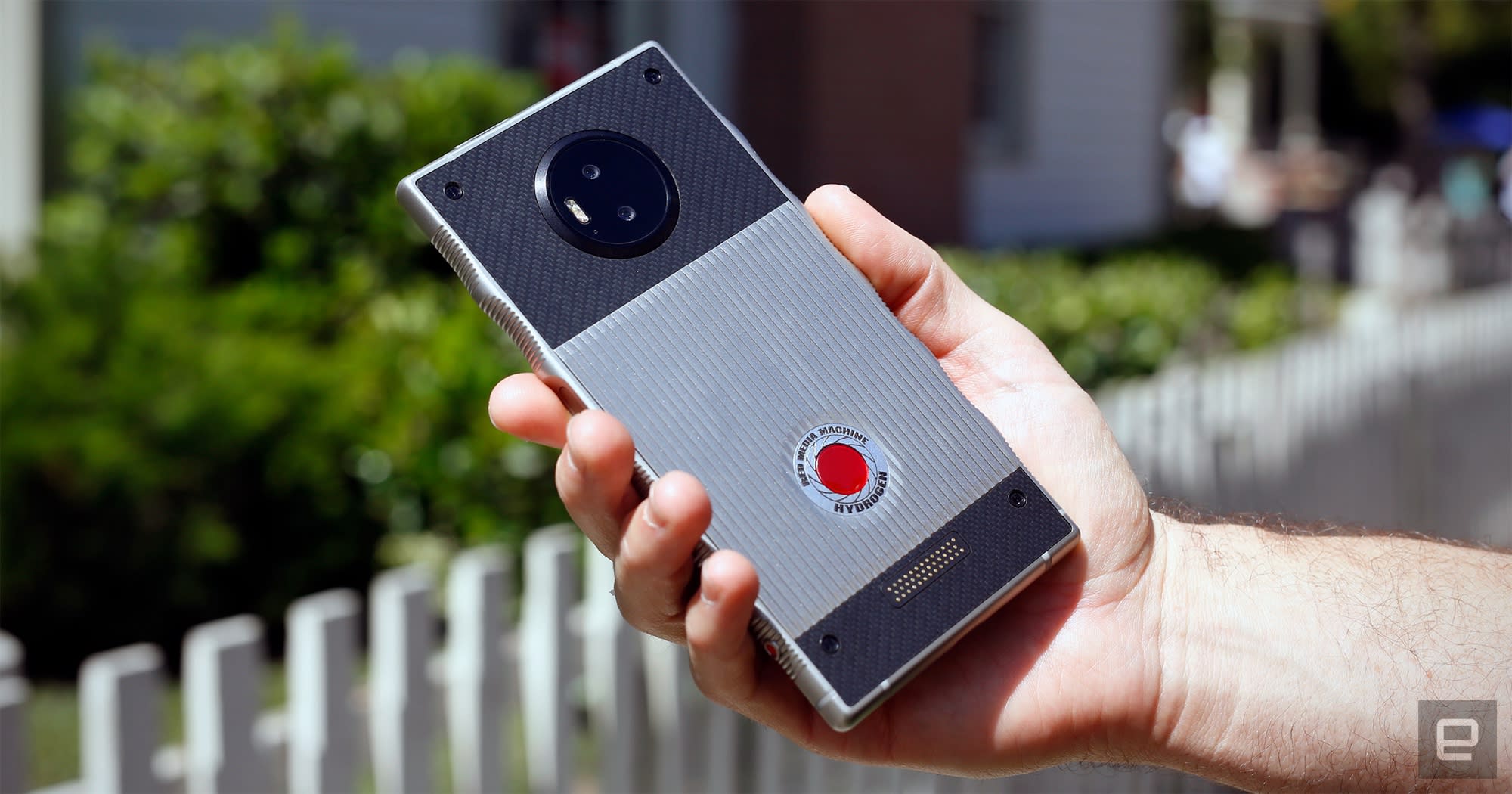 A closer look at RED's audacious Hydrogen One phone

Founder Jim Jannard built the smartphone he wanted to see in the world.

In a van sitting between the high school from Pretty Little Liars and the Stars Hollow gazebo from Gilmore Girls, RED founder Jim Jannard takes out his smartphone — the Hydrogen One — and starts whipping through demos with me. We're at AT&T's Shape entertainment conference at Warner Brothers Studios and this might be the most surreal hands-on experience I've ever had with a phone. Then again, this might be the most surreal smartphone I've ever used.

Companies have tried building modular smartphones, and have met varying degrees of success — the LG G5 and its "friends" utterly flopped while Motorola continues to push its various Mods. Companies also have tried to build smartphones with eye-popping 3D displays, and they've been abject failures. Remember Amazon's Fire Phone? No one has tried to squeeze both of those gimmicks into a single smartphone except for RED, a company that has only ever made cinema-grade digital cameras. A healthy dose of skepticism about all this isn't just helpful — it's required. Fortunately, Jannard isn't phased by the skepticism. He speaks with the surety of a man with little to lose.

That's because he doesn't seem stressed about what will happen when the Hydrogen launches on AT&T and Verizon this August. That's not because he's sure it'll be a massive commercial success, either. It's because he built the phone of his dreams.

"This is the phone I wanted," he told me. "If we don't sell one, I have the world's most expensive phone but I'm completely happy and satisfied with that." To underscore his point, he puts things a little more bluntly later in our conversation.

"I've got the coolest fucking phone in the world in my pocket," he said. "And I paid for it."

The first thing you'll notice about the Hydrogen One is its look — I'd call its style "badass-utilitarian." While other companies have sought to make stylish phones with glass bodies, the Hydrogen's aluminum (or titanium) frame features grippy, scalloped edges and a patch of what looks like carbon fiber around its dual camera. It's a handful, certainly, but it's not nearly as heavy or as dense as I would've expected.

Designs are meant to give you a sense of a product's character and in this case, that character is very clear: the Hydrogen One is a tool, not a toy. Meanwhile, you'll find the usual smartphone flourishes in the usual places. There's a set of volume keys on the left side, a power button and shutter button on the right, and a slot for microSD cards and the SIM up top next to the headphone jack. To get a real sense of why the Hydrogen One is special, you need to see its front and back.

I wish I could show you the Hydrogen One's face, but I can't — RED won't let people take photos or video of the phone's front since 2D media wouldn't do justice to the "holographic" display. That's unfortunate for you, because it seems like RED is really onto something here. When you're peeking at the homescreen or swiping through your apps in the launcher, the 5.7-inch Quad HD display looks like any other. Fire up some compatible content, however, and the screen springs to life. 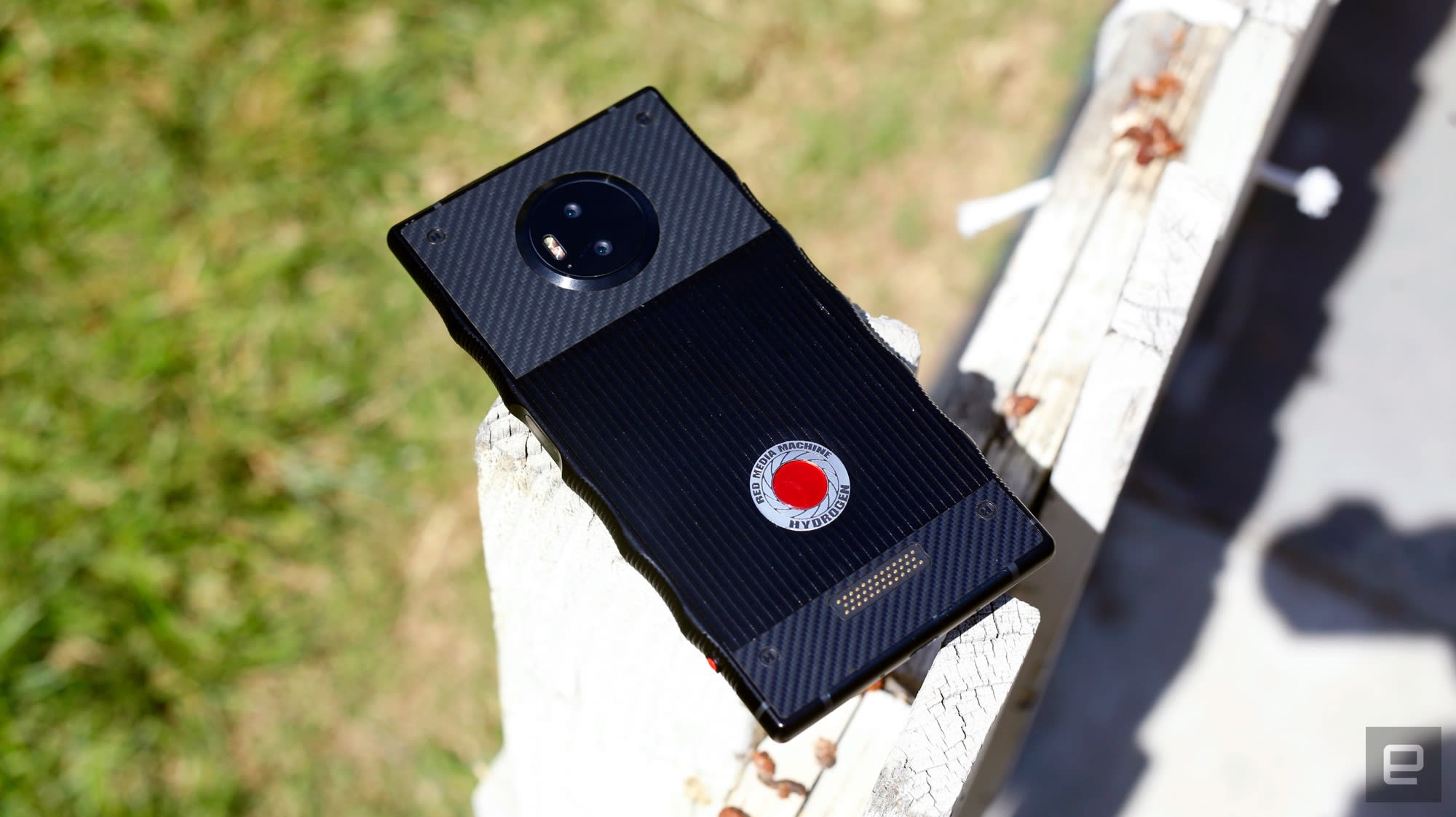 Still photos of flowers and fire hydrants Jannard shot with the dual camera seemed to leap off the display, and watching clips from movies like Brave made me feel like the films were unfolding around me. I paused the highlight reel a few times to get a better look, and while you won't be able to see things that weren't already there, the added depth gave scenes a sense of realness and presence I've never experienced on a smartphone. The so-called 4-View (or 4V) effect is strongest when you're looking at the screen dead-on, but you'll still get a sense of it when you peer at the screen from an angle. More importantly, the 3D effect seemed to persist as I moved my head around — an impressive feat when you remember that lenticular 3D looks jumpy and jarring when you switch between different perspectives.

These 4V visuals don't just apply to videos, either. Jannard showed me a recorded demo of a first-person shooter game that looked a lot like Afterpulse, and when the player lined up the reticle to pop an enemy in the head, the barrel of the scope seemed to zoom toward me. It's unclear what kind of work developers would have to do to optimize games for the Hydrogen One, but that's arguably overshadowed by a bigger question: would they even bother to do so for a single phone? The details are still murky. Maybe the most novel demo I tried was a 4V-enabled video chat app, in which I could see my own face — captured by multiple front-facing cameras with the same in-your-face depth as those movie clips. It wasn't just cool; it was utterly transfixing.

I'm told the heart of the experience is a layer of special material beneath the display capable of bouncing light in more than two directions (sort of like this crazy projector screen I saw at CES) to provide a more pronounced sense of depth. Meanwhile, software running directly on the phone's Snapdragon 835 is used to effectively fill in the gap between the two perspectives found in traditional 3D content — it's all happening on the fly and in real-time. This results in the most immersive visuals I've ever encountered on a phone. No wonder RED wants you to actually see the Hydrogen One before you draw your conclusions about its screen: words and photos don't do it justice. 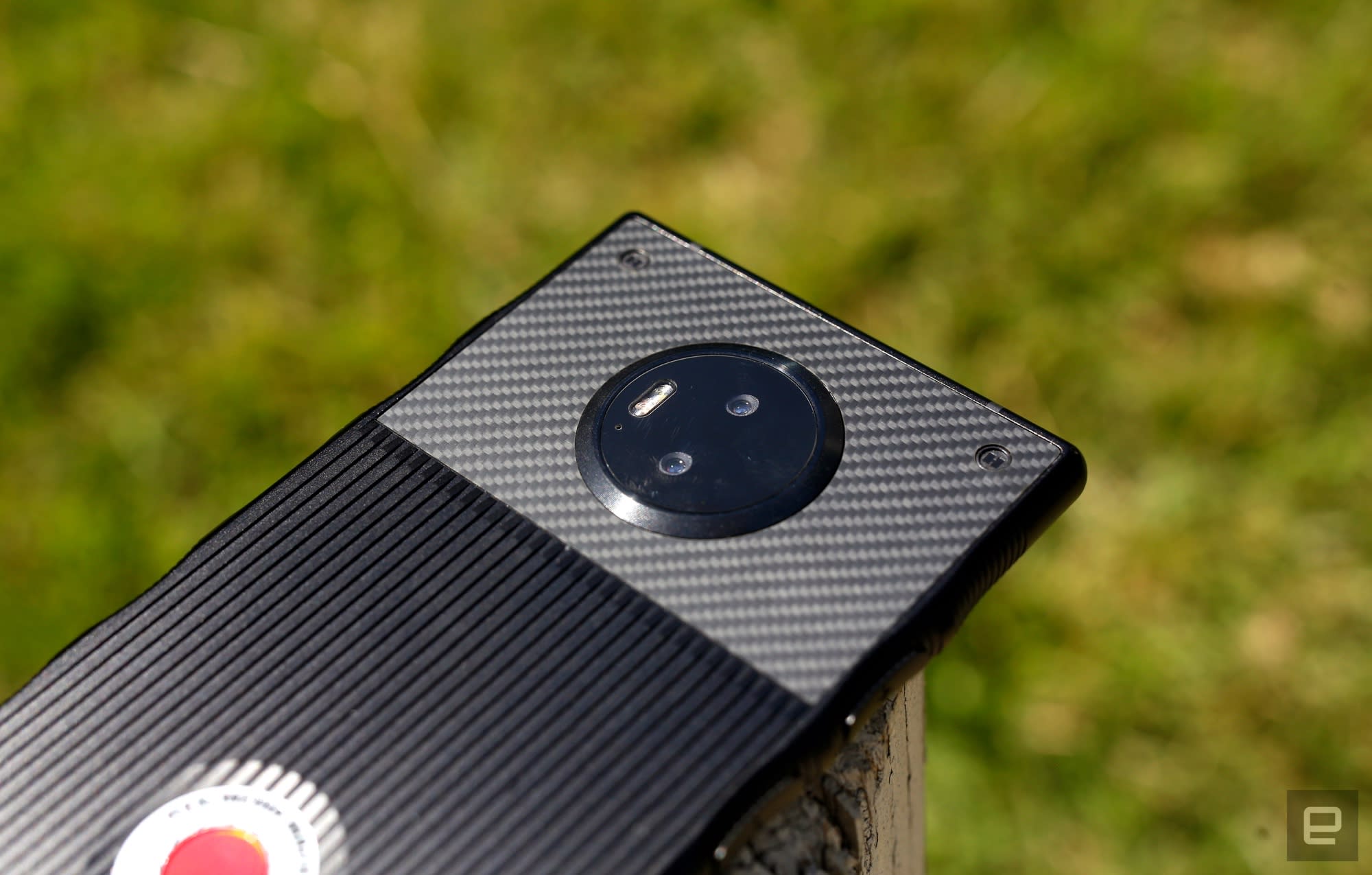 You can capture and view your own photos in videos in 4V, but that'll only remain interesting for so long. Given RED's history in Hollywood, it's no surprise to hear that the company is aggressively pursuing deals with film studios to get their content libraries up and running on the Hydrogen One. That's where the Hydrogen Network comes in. A number of potential partnerships are still being worked out, but Jannard confirmed that Lionsgate is on board and will bring its entire 3D library to the Hydrogen One. The process of converting existing 3D content to 4V is apparently quite simple, and if studios made the "maximum amount of tweaks and adjustments," it would take about 3 hours to make a 4V file out of a 1.5-hour film.

The other way the Hydrogen One stands out is its modular backside: you'll be able to swap different components onto the phone, like a cinema-grade camera that you can hook existing lenses up to. As mentioned, this isn't a new idea, but since the Hydrogen One is arguably geared toward people who are used to dropping big bucks on camera gear, it seems like a safer (and more lucrative) approach than I've seen from other companies. As far as Jannard is concerned, the limited success achieved by other modular smartphones doesn't mean the concept itself is flawed — it means that the modules those companies have made aren't meaningful enough. Jannard wouldn't elaborate on what other kinds of modules the company plans to build, but he did note that RED is open to working with outside partners to build additional hardware for the Hydrogen platform.

"If there are companies that can add value and we don't have to do it, we'll absolutely embrace that," he said.

RED is being very picky about who it works with to build Hydrogen add-ons, mostly because it wants to keep "crap modules" from being attached to the phone. That said, the company is already making some progress — Jannard confirmed that RED is talking to one potential partner about developing a module, and he thinks it's "likely to happen."

A patent filed in 2015 reveals the company's elaborate mobile vision.

Of all the questions that surround the Hydrogen One, one looms larger than the rest: Why build a smartphone like this? Even mobile incumbents have trouble navigating the market, after all. The answer is a complicated one, and it stems from deeper in the past than you might expect. Before creating RED in the mid-2000s, Jannard was best known as the founder and occasional CEO of Oakley, a company that had spent decades crafting sunglasses, goggles and accessories for active, outdoorsy types. His time at Oakley's helm gave Jannard a deep appreciation for the process of creating products for regular people, and that hasn't changed despite a long tenure at his pro-oriented camera company.

"I'm a consumer product guy," he told me. "When I started RED, I always had the idea that at some point we'd leverage the library, the team, the technology into a consumer product. I thought it would take five or six years — it took twelve." 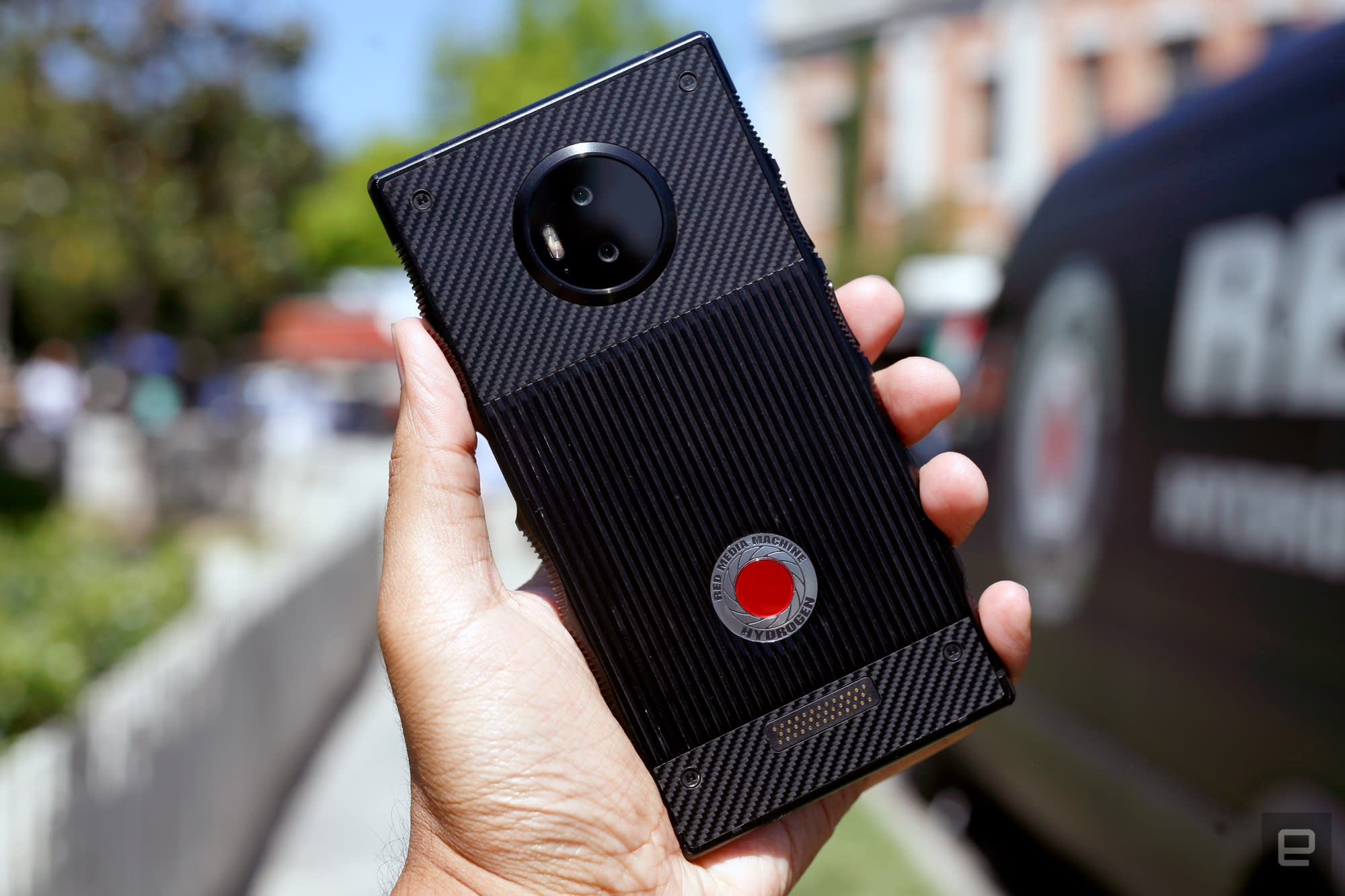 Despite knowing that he wanted to make something for consumers, Jannard didn't set out knowing RED would build a smartphone — especially one that relied so much on unorthodox technology. The decision to go ahead with a phone like the Hydrogen One came from two sources: his understanding that smartphones are profoundly influential in people's lives, and a strong sense of what he himself wanted to own. Specifically, he couldn't believe that people weren't paying attention to the potential of immersive, next-generation displays like the ones RED found in Leia's labs.

"The idea of 3D [in a smartphone] is not bad, it's just that was never an implementation as convenient as this," Jannard said. "You don't need to wear anything, you don't need to charge anything — it seems like a no-brainer to me."

Add a heaping portion of RED's expertise with cameras and the Hydrogen One was born. It's a radical departure from the norm and, as a result, it ticks some boxes people didn't even know they wanted to be ticked. That's just how Jannard wanted it. He told me he saw the mobile industry becoming mired in a "sea of sameness" and the last thing he wanted to do was wade in himself with something tragically conventional. The Hydrogen One could be a game-changer. It could also be a flop. One thing remains clear, though: RED has built a terribly impressive, wildly ambitious device, and it feels like the very best kind of weird. Regardless of its potential for success, the rest of the industry could take a lesson or two from the Hydrogen One.