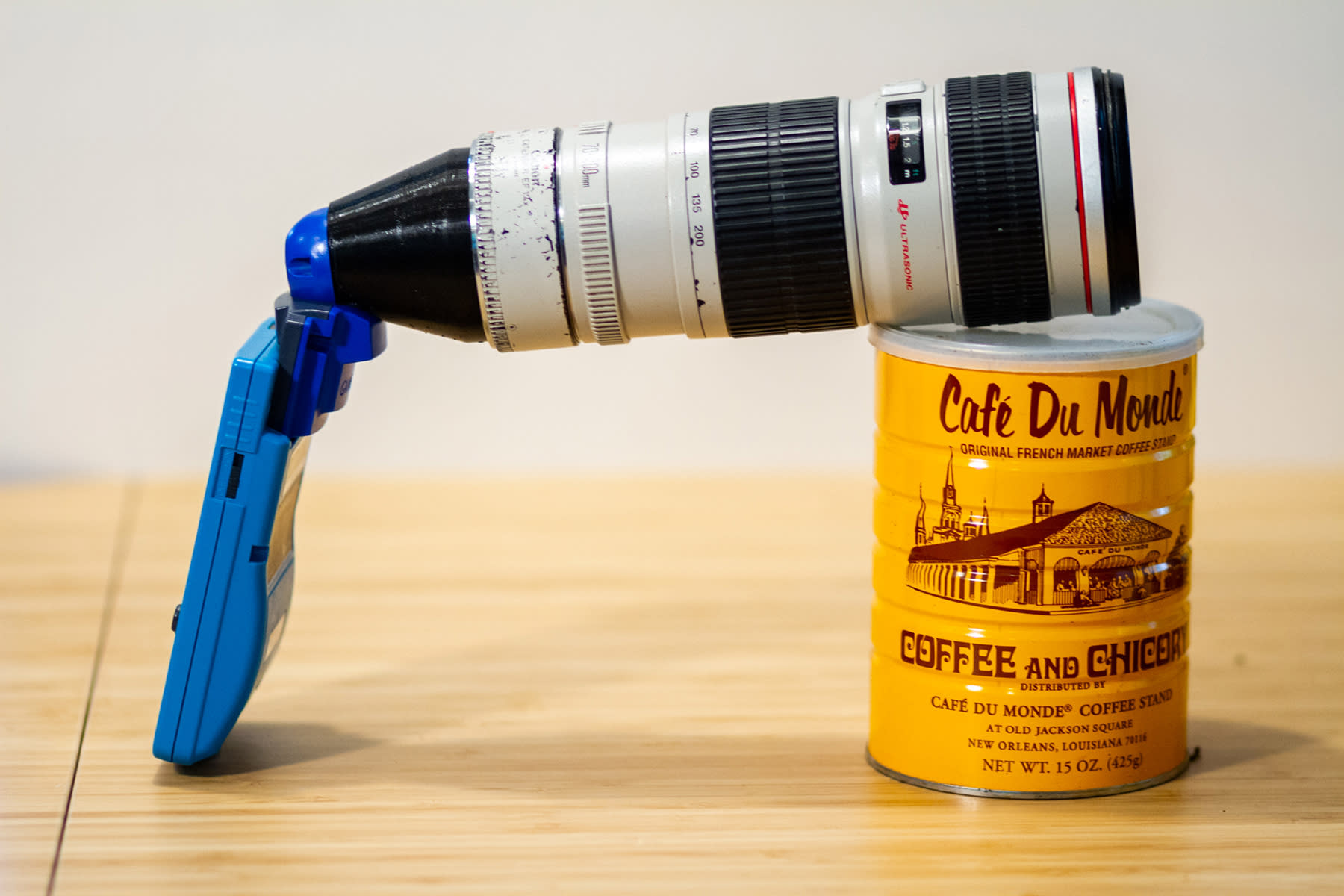 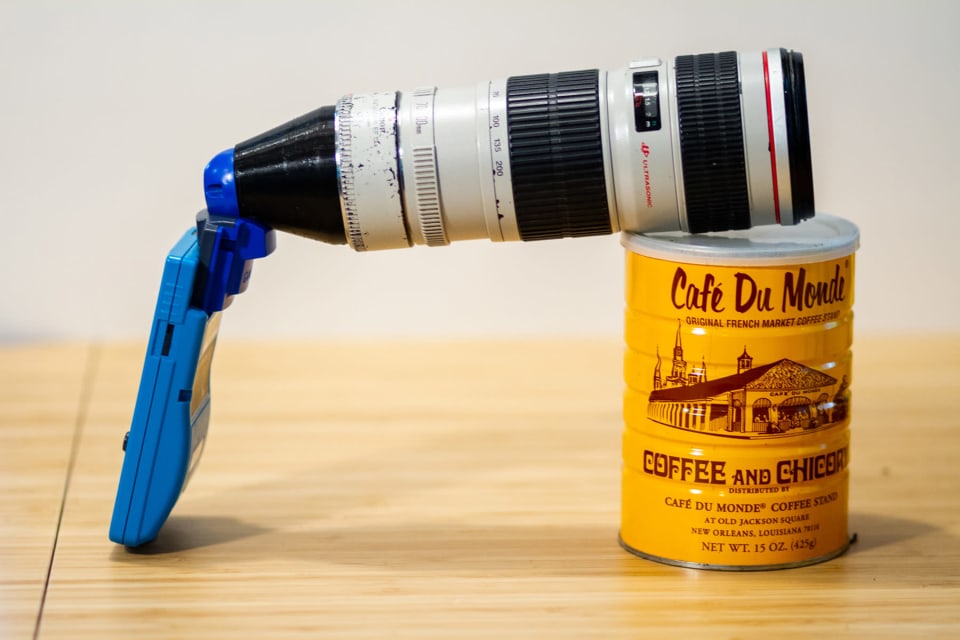 Nintendo launched the wonderfully weird Game Boy Camera for its beloved handheld console in the late 1990s. It attached like a cartridge and allowed people to capture, edit and, if you had the companion hardware, print blocky images on thermal paper. These days, of course, the camera is out of production, but that hasn't stopped a small community from modifying and shooting with the tiny contraption. Designer Bastiaan Ekeler, for instance, has built a Canon lens adapter which supports a comically large (by comparison, anyway) telephoto lens. The result is a new, whimsical way of shooting landscapes and wildlife from afar.

Ekeler drew the adapter in Rhino 3D, a piece of software for professional graphics and CAD work. He has a background in industrial design, so it only took him an hour to conceive and a further 60 minutes to manufacture with his Monoprice Select Mini v2 3D printer. "I've seen people use cheap cellphone lens adapters on the Game Boy Camera before, but I wanted to see what a high-quality lens would do for this vintage piece of technology," he told Engadget. With a little cleanup it was soon fitted to the back of his blue Game Boy Color and second-hand Game Boy Camera.

The adapter should, in theory, work with a host of Canon lens. For his first photography session, however, Ekeler wanted to capture images that would normally be impossible with the standard Game Boy Camera lens. That meant a piece of telephoto glass -- the biggest one he could find, given Nintendo's peripheral has a tiny sensor and a ridiculous 10.81 crop factor. "I figured if I'm going to have a telephoto lens on this thing, I might as well go all out and push it to the limit," he said. That meant a 70-200mm, along with a 1.4x teleconverter for a 3000mm equivalent field of view.

The large lens made shooting a challenge, however. The weight distribution isn't ideal and there's no tripod mount on the Game Boy Color. Ekeler captured his images handheld with one finger on the shutter button and his other hand adjusting the focus of the lens. His first batch of images include birds, boats and even the moon. The latter was particularly tricky, according to Ekeler, because the Game Boy Color doesn't have a backlit screen. It was also hard to find the moon because the camera preview refreshes at roughly one frame per second in low-light conditions.

Still, he managed. The designer then transferred the images using a hacked-off Game Boy Link Cable and an old Arduino Duemilanove. There are devices, such as the BitBoy, that make the process simpler, but they're expensive and Ekeler is familiar with electronics. So he followed the guide created by Brian Khuu, which requires a Game Boy Printer Emulator, and converted the resulting HEX files into PNGs with a little JavaScript. The images were transferred as one tall picture -- almost like a roll of traditional camera film -- so Ekeler had to cut them up later in Photoshop.

The designer is now considering a 2x Canon teleconverter and "something insane like a Canon 800mm" so he can do some close-up wildlife photography. Ekeler also wants to experiment with some portraiture using a fisheye lens -- the sensor crop would give it a normal field of view -- and studio lighting. "I just really like the use of professional photography gear with this little 128x112 greyscale camera," he said. "It's very funny and interesting to me." And if people are keen, Ekeler will clean up the original 3D drawing and post it to Thingiverse for anyone to download and modify.

In this article: cameras, canon, design, GameBoy, GameBoyCamera, GameBoyColor, GameBoyPrinter, gear, LensAdapter, nintendo
All products recommended by Engadget are selected by our editorial team, independent of our parent company. Some of our stories include affiliate links. If you buy something through one of these links, we may earn an affiliate commission.