The company claims it is built to conform to military specifications against heat and cold.

ASUS has announced the ZenBook S (UX391), a 13.3-inch ultraportable that is designed to be tougher than your average laptop. Built to military specifications, the company claims that the S has proved its mettle in a series of endurance tests in tough conditions. But, unlike most rugged devices, the ZenBook S is light and thin enough to make you think it's a delicate piece of gear.

Measuring 12.9mm thick and weighing a little over two pounds, the ZenBook S' strength comes from its all-metal frame. Inside, you'll find one of two eighth-generation Intel CPUs, either the i5-8250U or an i7-8550U CPU, paired with either 8GB or 16GB RAM. Since it's an ultraportable, you're stuck with Intel's integrated UHD 620 graphics, but you can pick from among a 256GB, 512GB or 1TB SSD. And with a 50Wh lithium-polymer battery, ASUS claims that the machine will run for 13.5 hours at a time.

Users will get a raft of build-to-order display options, each one framed with ASUS' 5.9mm-thick NanoEdge bezels. Top of the range is a 13.3-inch 4K (3,840 x 2,160) glossy touchscreen, but there is also an HD (1,920 x 1,080) glossy non-touch display, as well as an anti-glare version of that same screen. And, aside from the 3.5mm headphone jack, the ZenBook S is packing three USB-C ports, two of which also support Thunderbolt 3.

The new ZenBook S also features ASUS' ErgoLift technology, where the display hinge pushes back to raise and tilt the keyboard by 5.5 inches, making it easier to type. The extra angle also helps the laptop stay cool by pushing more air underneath the chassis, to prevent things from getting too hot. Although you won't necessarily need to type with it at all, since the laptop also comes with Amazon Alexa integration for voice control. 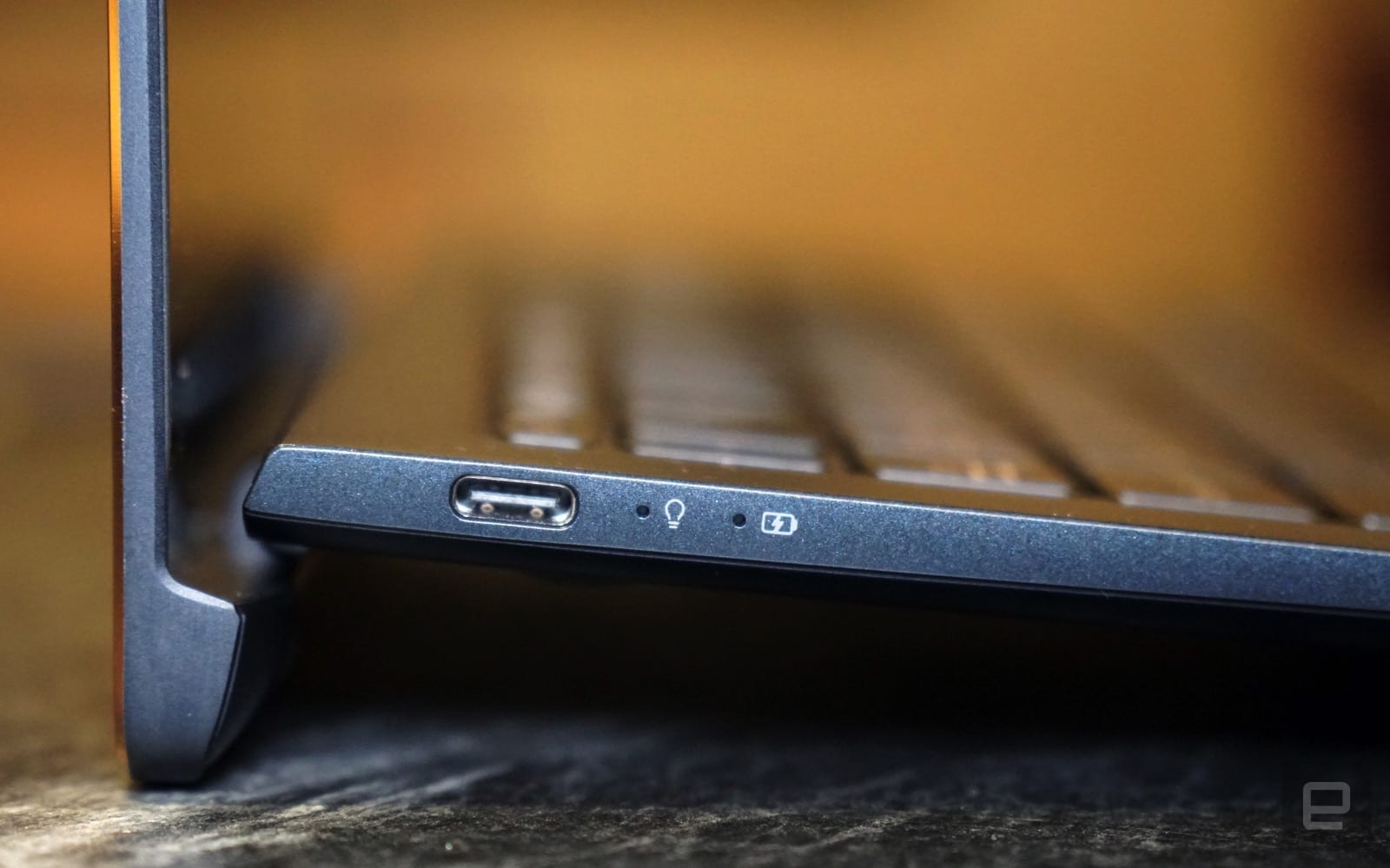 One interesting facet of the ZenBook S is how very light it feels in the hand -- lighter than you might expect from a laptop of its size and shape. In fact, the display portion is heavier than the laptop's body, and yet it doesn't feel unbalanced as a consequence. Partly this is because the ErgoLift hinge is thick enough to feel quite strong, while the display hinge houses the 3.5mm headphone jack. That's a departure from many laptops, but it doesn't appear to be much of an issue.

The ASUS ZenBook S is available in Deep Dive Blue or Burgundy Red, both of which come with Rose Gold edge highlights. We don't know -- yet -- when this machine will hit stores, or how much it will cost, but when we do we'll update this with all the details.

All products recommended by Engadget are selected by our editorial team, independent of our parent company. Some of our stories include affiliate links. If you buy something through one of these links, we may earn an affiliate commission. All prices are correct at the time of publishing.
ASUS’ new ZenBook S is thin, light and rugged
asus
Computex
Computex2018
gear
hands-on
laptop
notebook
personal computing
personalcomputing
Ultraportable
ZenBook
ZenBookS
ZenBookSUX391