‘The Road to Russia’ includes a few shipping containers.

Tucked in the back of Fox Sports' Charlotte facility, a typically unused storage space was abuzz with activity in early April. A Los Angeles-based crew took advantage of the extra room in what used to be the headquarters of the Speed network to test gear that will be used to broadcast live soccer action from this summer's World Cup.

There's no eye candy inside this warehouse space, but the final preparations that went on here are essential to sniffing out any potential issues before all the gear is packed into shipping containers for a monthlong voyage to Russia. In the span of a few hours, I'd learn what Fox had planned for the 2018 World Cup -- from in-depth preparations to a special studio, AR, VR and streaming.

After winding through the halls past the network's NASCAR Race Hub studio, Fox Sports Director of Technical Operations Kevin Callahan led me on a tour of the space, meticulously explaining what was going on at each stop and why it had to be done. Callahan is no stranger to big events: He's overseen Fox broadcasts for the Super Bowl, in addition to the network's coverage of major soccer tournaments like the CONCACAF Gold Cup, Copa America, Women's World Cup and Confederations Cup. While all of those offered chances to fine-tune the process, the Confederations Cup was held in Russia just last summer, serving as a dry run for the biggest soccer tournament in the world.

"Once we're in Russia, we have exactly 30 days from when we get the keys to the time that we're on the air," he said. "To build an entire broadcast facility in 30 days is a little tight, so we wanted to take advantage of the facility we have here to get as much tested as we can."

Thanks to the Confederations Cup, Callahan and his team have an idea of what to expect in Russia. This means they know how hard it will be to get even the simplest of supplies -- like whiteboards. A forklift was actually loading a dozen or so of those into a container as I got the rundown. The locale also requires them to go through a painstaking process of testing to make sure things will work under certain conditions. Testing all the gear on Russia power

Outside the facility in Charlotte sat a generator Fox rented specifically for testing all of the broadcast gear on the 230-amp current prevalent in Russia.

"We wanted to eliminate every variable that we possibly could," Callahan said. "If we had a piece of equipment that didn't react well, we would find that out here."

Last summer's Confederations Cup also gave Fox the chance to test its security measures. Like it does for the Super Bowl, the World Cup crew worked closely with the broadcaster's information-security team to verify its methods were the best. When you're hauling literal truckloads of gear around the world, you have to make sure you cover the events without a hitch. And in 2018, that includes being able to mitigate the risk of hacking.

Preparing for an event like the World Cup is about a lot more than just security. You have to be ready to cover a dozen venues during the group stage and as many as three matches a day. For Fox, that process started in 2013. The Women's World Cup presented the first learning opportunity in 2015, followed by the Copa America in 2016 and both the Gold Cup and Confederations Cup last year. Over the course of those events, Callahan and his team pieced together what he calls "kits" to make the at-venue job much easier. Assembling the stadium "kits" in Charlotte

"We took lessons that we learned at the Women's World Cup and put together a kit that consists of encoding gear, intercom systems and things that mimic what's in a mobile [broadcast] unit," he tells me, running down a list for what seems like the millionth time. "We started working with those ahead of the Copa America in the United States in 2016." Fox would also use the "kits" for the Confederations Cup in 2017, at which point the broadcaster had four sets to deploy. Each time, the network took note of feedback, fine-tuning the compact set of gear so that it required the absolute minimum number of people to use.

"The Confederations Cup, from a venue standpoint, went off without a hitch," Callahan said. From there, Fox teamed up with an outside partner to build two more packs, so it will use a half-dozen of the kits in Russia at a dozen stadium venues starting next week. Some sites won't have a dedicated crew or commentators, depending on which teams are playing. Instead, Fox will rely solely on the feed from the host broadcaster.

Once testing was complete, all of the gear headed to Russia was loaded into shipping containers and trucked to a port in Norfolk, Virginia. There, it was moved onto ships for its monthlong journey to St. Petersburg, which includes a stop in the Netherlands. That voyage began in Charlotte on April 6th -- over two months before the first match in Russia. The documentation process, including the details that will be needed to clear customs, began months before the scheduled departure from the States.

The last key piece of World Cup gear left the US on May 7th. 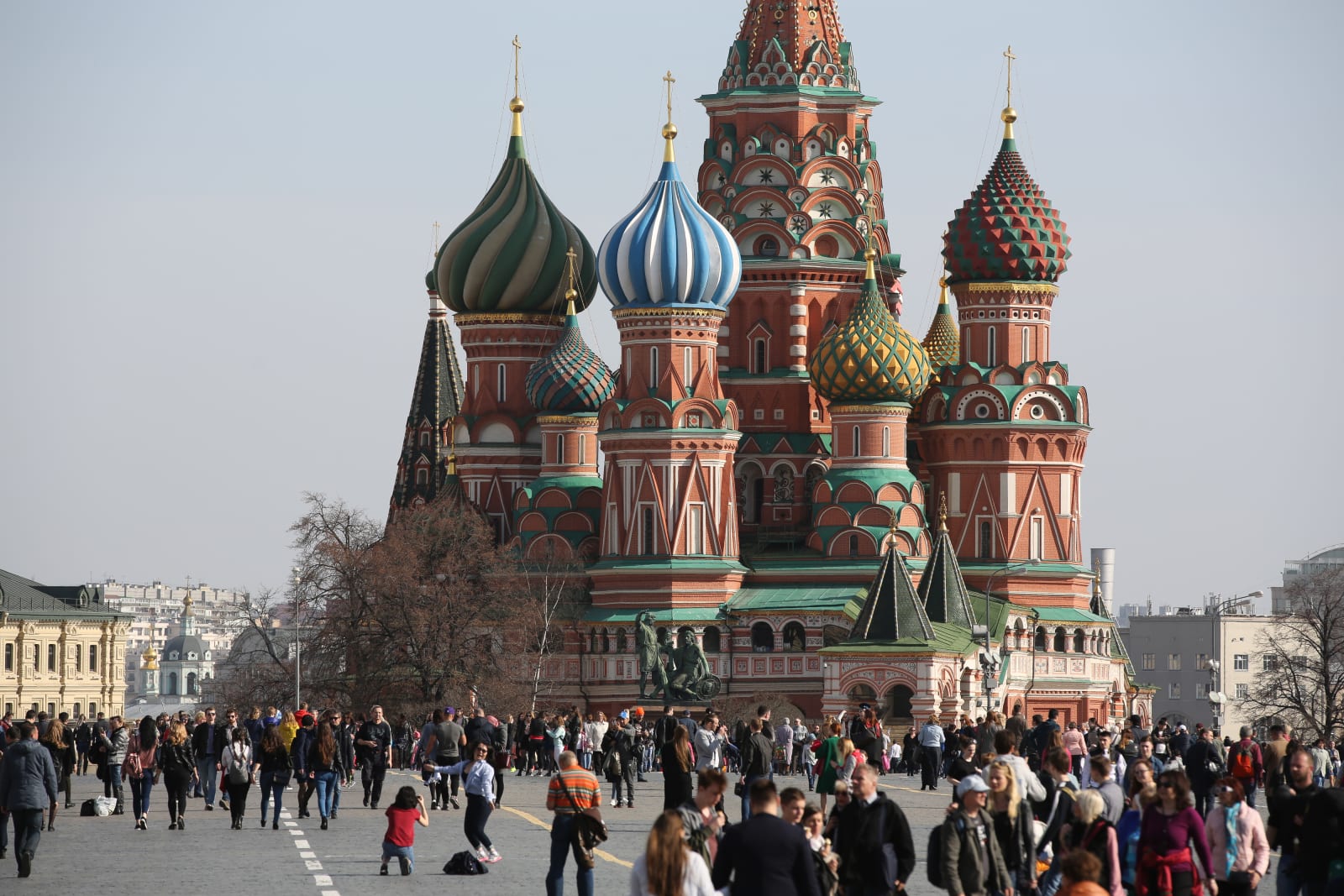 Besides the 12 stadiums that will host action on the pitch this month, Fox has a 13th venue: a custom-built studio that will reside in Moscow's Red Square. Callahan gets visibly excited when our conversation turns to the broadcast studio, and for good reason: Fox is the only international broadcaster that has a dedicated studio at that iconic location. Based on the renders I've seen, the square's famous domes and spires will serve as a backdrop for a lot of camera shots during pre- and post-game coverage. It gives the network a unique advantage over the myriad broadcasters vying for the same real estate during a marquee international competition.

"Because space is very tight, we wanted to maximize the floor space," Callahan explained. To do so, Fox opted for robotic cameras, which include the StudioBot jib. This machine is not unlike a robotic welding arm, offering six axes of movement to get the perfect shot. It can also haul both a camera and a teleprompter. Most important for Fox, its moves can be preprogrammed and don't require extra rehearsal time.

"It's able to do repeatable, predictable moves, which will really help enhance our augmented-reality graphics," he detailed.

As Callahan explained it, crucial pre-match details like lineups aren't available until around an hour before the match. That doesn't give a camera crew, studio personnel and on-air talent a lot of time to rehearse. Plus, they're like already on the air. And with limited space in the studio, Fox needs to keep the staff needed to run things at a minimum. With tech like the StudioBot, the broadcaster doesn't have to worry about the lack of practice because it knows the gear will do exactly what it's told to do. And, crucially, it will also allow for the perfect presentation of those fancy AR graphics. We started making a big push at [AR] in 2015 for the Women's World Cup and we haven't really stopped.

"We started making a big push at it in 2015 for the Women's World Cup, and we haven't really stopped," Callahan explained about the network's AR chops. "In addition to traditional things like graphics and lineups, you'll see things like tabletop analysis like we do on Fox NFL Sunday, so there's a lot of augmented reality coming your way."

Gear like the StudioBot also helps when you consider the Fox control room for the Red Square studio is located at the International Broadcast Center ... 12 miles away.

AR isn't the only in-fashion tech Fox will employ. As it did during the Gold Cup in 2017, the network teamed up with LiveLike on a VR suite. Basically, the experience is similar to you having your own private box at a match, only here there are multiple 180-degree camera angles, highlights and a smattering of 360-degree features. That and there's no open bar.

And speaking of camera angles, you'll have plenty of those to choose from on the more traditional streams.

All 64 matches will be available for streaming live, and full replays will be available afterward if you happen to miss one. Thirty-eight of those games will air on Fox proper, meaning you won't need a cable subscription to watch. Callahan explains that this is the most ever on an over-the-air network. Those other 26 matches will be on FS1, and Fox has a range of related programming planned for FS2. As you might expect, that entire package will stream on the Fox Sports app. Besides the main broadcast stream, each match will have five "bonus" streams for alternate viewing options. There's a Team Channel that offers three live video feeds including the match, players and the coach/bench alongside real-time stats. Like it does for Champions League and other big soccer matchups, Fox will have Match 360 and Tactical View streams for the World Cup. If you're not familiar, the former is a behind-the-scenes look two hours before game time with things like team arrivals and warm-ups. That Tactical View is exactly what is sounds like: A camera is positioned high above the pitch, bringing you a look at all 22 players so you can see the shape of the offense and the defense. After the match, the tactical feed switches to post-match interviews and press conferences. Again, these are all things Fox has done before, including some during the 2015 Women's World Cup, but that doesn't mean they won't enhance the viewing experience.

There's also a Cable Cam suspended over the field to capture views you wouldn't ordinarily see. It's a piece of Fox broadcasts NFL fans are undoubtedly familiar with. Last but not least, a Highlights feed offers a constant loop of the notable plays as they happen, including multiple angles and slow-motion replays. For the aficionados of soccer history and fans of highlights, Fox is teaming with IBM on what's called the Highlight Machine. Essentially, the tool will deliver key moments from this year's World Cup as well as past matches from as far back at 1958 -- all upon request. As is typically the case when IBM's involved, its Watson AI is doing the heavy lifting, pulling the footage you ask for so you can compile your own highlight reel. And yes, you'll be able to beam them out to your hordes of followers on your go-to social channels.

While the road to Russia began for national teams in 2015, the preparations for the Fox field crew began about five years ago. Luckily for Callahan and his team, they had a number of major international soccer tournaments to use as tune-ups for the biggest event in the sports, and one that only comes around every four years. From a painstaking testing process to the custom studio, tech and a wealth of streaming options, Fox Sports is pulling out all of the stops to bring the World Cup to soccer fans in the US.

Perhaps the only thing that could make it even better would've been for the Yanks to qualify for Russia.