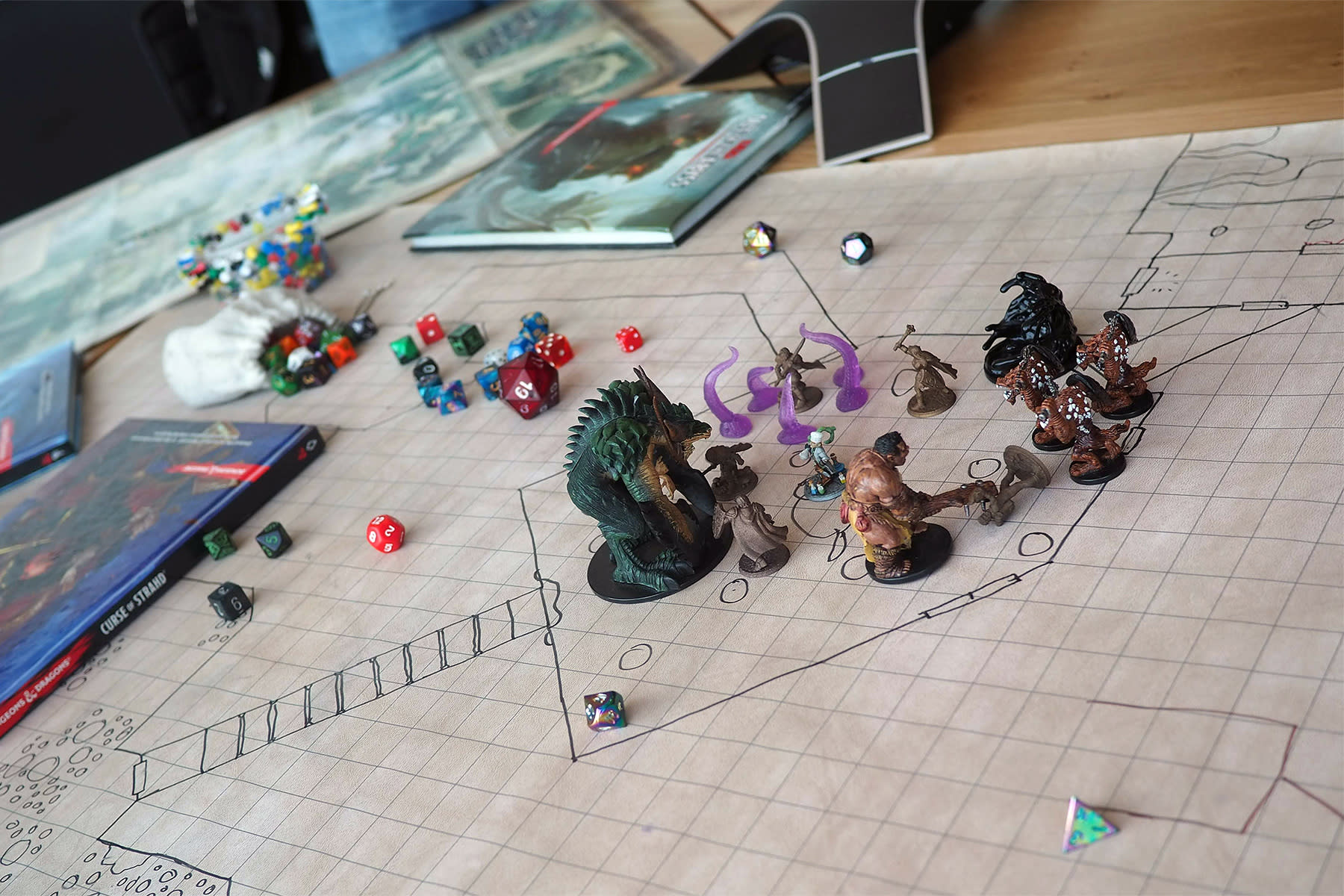 On the 62nd floor of One World Trade Center, Lorghoth the Decayer is waiting. A party of brave coders and digital strategists gathers around a conference table to slay the wicked beast -- praying the D20 rolls their way.

It's just another Wednesday night at Code & Theory, a digital creative agency in New York City's tallest skyscraper. Every other week, a team of developers and designers hops into a conference room (with a stunning view of Manhattan) to participate in a unique, after-hours exercise: a Dungeons and Dragons game night. Timm Woods, a professional dungeon master, leads each session, guiding the colleagues through intricate adventures filled with gypsy-camp raids, vindictive scarecrows and the cruel mists of Ravenloft.

Woods, an energetic and scruffy Brooklynite, has been a professional dungeon master for about five years, running everything from after-school campaigns to private parties and events. The weekly sessions at Code & Theory represent the next step in his business plan: going corporate.

"It's easy and understandable for colleagues to miss out on making personal connections in a tech workplace," explains Woods. "You're busy all day in your particular space or cubicle, chatting on Slack with only select coworkers. But a tabletop game like D&D creates a new avenue of communication, with problem-solving elements that require good face-to-face collaboration."

So far, the experiment seems to be working, with Code & Theory colleagues raving about the campaign.

"My role at work is not social," says front-end developer Aaron Hitchcock (who plays as Watt O'Dell, a surly druid). "I'm just on my computer all day, not talking to people for the most part. Playing D&D gives me a chance to talk -- make stuff up, in fact -- and BS with coworkers. You're half being yourself, half being a made-up character, so there's an element of letting your hair down that I really enjoy."

Riley Walker, a designer at Code & Theory, had long wanted to play Dungeons and Dragons ("the pinnacle of nerdom," as he jokingly calls it) but felt uncomfortable joining a random meet-up in NYC. When a colleague sent out the initial invite on Slack to start an office campaign, he jumped at the chance.

"There are lots of challenges with running a campaign with friends," says Walker (who plays as Toby Tinkerbottom, a hobbit bloodhunter). "Your friends all have different schedules, you need to find a host, you have to figure out dinner... it's a mess. But playing after work, with a professional DM coming to us, makes it so much easier."

Hitchcock and Walker laugh as they recall their campaign's most memorable moments, agreeing that the game has fostered creativity, friendship and collaboration, even fueling some lighthearted arguments (take the shortcut? ambush the enemy? sacrifice the hobbit?).

Woods points out that this is precisely what makes Dungeons and Dragons such an essential team-building exercise, providing a low-stakes environment for colleagues to work together and disagree. "People know it's okay to have fun and do silly things," Woods says, "even make mistakes, but still have to face 'consequences' -- just with much less severe consequences than a real-world, work-related scenario."

Game nights like the ones at Code & Theory are an emerging trend at tech companies throughout the country. For example, ThoughtLab, a Utah-based web-design company, has been hosting an on-and-off Dungeons and Dragons campaign for more than 10 years, bringing together colleagues in engineering, sales, and design for Pathfinder adventures. According to Sean Hanley, Thoughtlab's lead developer and de facto dungeon master, the team-building qualities are hard to measure concretely but are certainly present. "You're more likely to help out," he says, "and not throw people under the bus -- and other 'it's just a job' sorts of thinking -- when you're more than just coworkers."

Meanwhile, Relativity, a Chicago-based e-discovery company, has been hosting an informal Magic: The Gathering group for over four years. Consisting of 49 players within the company (hailing from engineering, customer support, security and operations), the group is now used by hiring managers as a selling point during the interview process. Mark Hill, one of the company's advanced software engineers who leads the Magic group, notes that the weekly games have created stronger lines of communication between teams.

The age of trust falls and boring company retreats is over, replaced by corporate improv sessions, zipline outings and escape rooms.

"We have active Slack groups dedicated to VR, video games like World of Warcraft and Path of Exile, and even Magic's arch-nemesis, Hearthstone," Hill says. "But there is something special about a tactile, face-to-face game like Magic: The Gathering in building friendships."

Game nights, though, are just the tip of the iceberg. Corporate America is evolving, as an increasingly millennial workforce embraces off-the-wall team-building concepts. The age of trust falls and boring company retreats is over, replaced by corporate improv sessions, zipline outings and escape rooms, as today's tech companies search for creative ways to keep employees engaged.

Among the flashier undertakings are WeWork's annual summer camp, which serves as part-music festival, part-camping trip, and Mozilla's annual MozFest, a multi-day extravaganza, open to employees and the general public, with speakers and activities.

"Before each MozFest, we host a MozRetreat -- a multi-day team-building event for staff and community who curate the festival," says Sarah Allen, MozFest's executive festival director. MozRetreat activities have included embroidery classes, group yoga and visiting a virtual reality studio.

Allen notes that activities like these are desirable for team-building because they encourage different groups of employees to mix and converse, pushing them to get outside their comfort zones. A game like Dungeons and Dragons, she says, could have the same effect.

"Gaming can foster creativity, group planning, shared ownership and fun, and often has a lower barrier of entry," she says.

All of this lends credence to what Woods is doing at Code & Theory: creating a low-stakes, collaborative environment where employees can stop coding for a while and put their creativity on full display. He's begun the process of pitching companies directly, selling them on his team-building vision and the importance of using a professional DM, while also hoping some of his regular clients might consider bringing him into their workplaces. And, who knows, with the tech industry more willing than ever to spend big bucks on unique team-building programs, a day may come when companies will start hiring their own in-house dungeon masters.

As he leaves One World Trade Center after another successful session, Woods stops and looks back at the iconic skyscraper behind him, its tip piercing the hazy, evening sky. "No matter where this endeavor leads me," he says, "one thing is for sure: I don't think I'll ever run a game with a better view."

In this article: av, design, entertainment, gadgetry, gadgets, gaming, gear, longread, personal computing, personalcomputing
All products recommended by Engadget are selected by our editorial team, independent of our parent company. Some of our stories include affiliate links. If you buy something through one of these links, we may earn an affiliate commission.