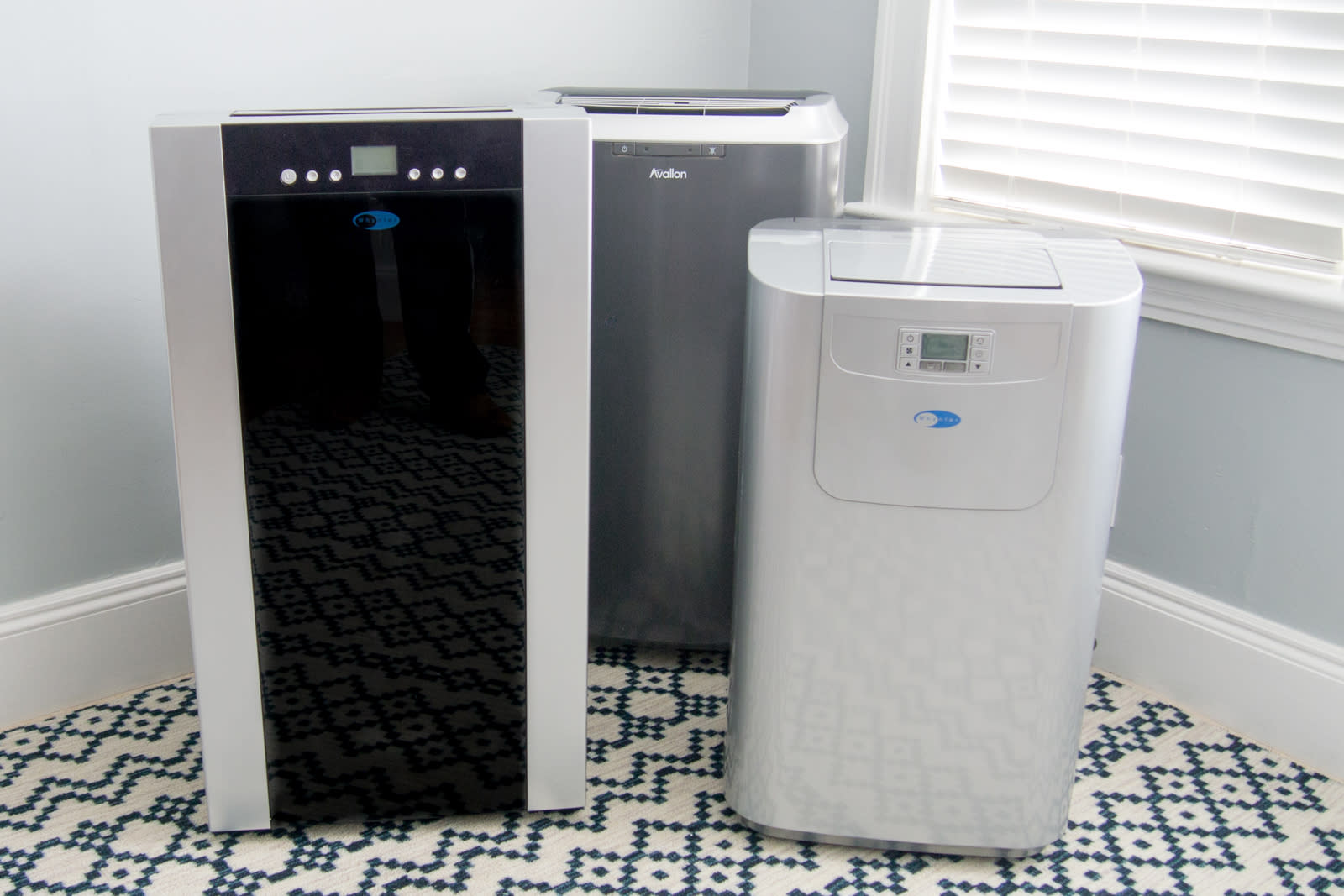 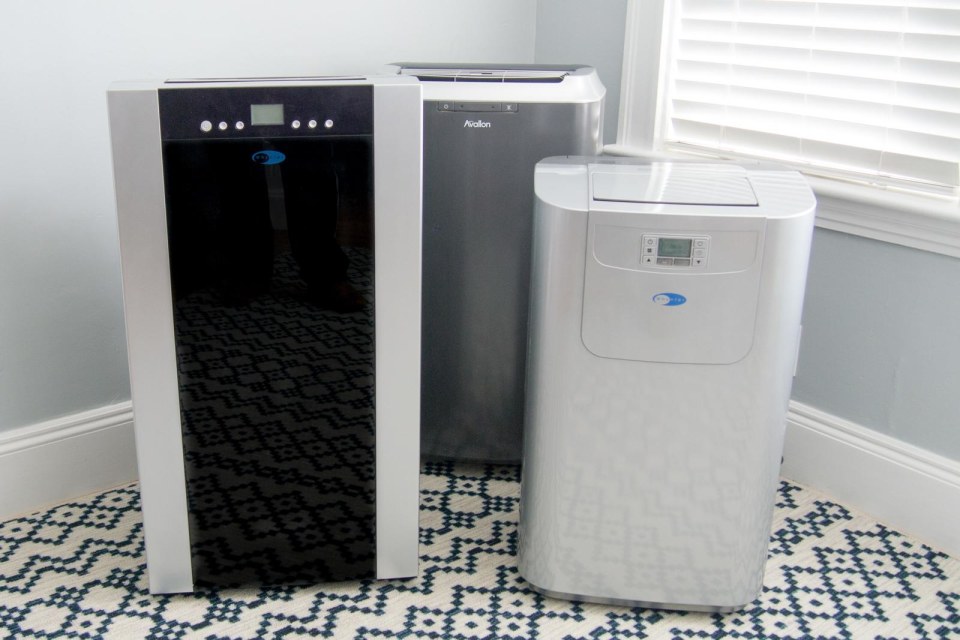 After putting in 65 hours of research, comparing more than 110 portable air conditioners and testing 11 of the best models, we recommend the Whynter Elite ARC-122DS. However, bear in mind that because portable air conditioners are housed entirely indoors they're extremely inefficient, and in very hot weather they can struggle to do the job at all. Dual-hose models like the Whynter are more efficient and effective than single-hose models. But, if possible, you should use a window or wall AC instead—they work better, usually cost less, and don't take up as much space.

While the Whynter Elite ARC-122DS is our top pick, we have seen this model and others experience stock issues. If you're willing to wait a bit longer, it is available for purchase on backorder.

Air conditioning works by moving heat from the inside to the outside of your house. Most types of air conditioners are designed to sit at least partially outdoors, where the heat can just passively radiate away. But a portable AC sits entirely indoors, so it needs to actively push the heat up an exhaust hose that ventilates through a window (sort of like a clothes dryer). It's quite an uphill battle.

This design has several bad side effects. The worst is that it pulls warm air into the room through cracks around doors, windows, and floorboards. Another side effect is that a portable AC's exhaust system wastes a bunch of cold air. Other types of ACs keep indoor and outdoor air almost totally separate: Indoor air gets cooled as it passes over the evaporator, outdoor air takes the heat off the condenser. But a portable AC uses some indoor air—which it already took the time and energy to cool off—to take heat off the condenser, and then dumps it outside.

Finally, the body and hoses radiate some heat back into the room before it all gets pushed out through the exhaust. The Department of Energy determined that, on average, a portable AC's hoses radiate about 3 Btu per square foot, while the body casing radiates enough heat to offset about 2 percent of cooling. Portable ACs all use the same technology, but they vary in size and appearance. Photo: Liam McCabe

We considered both single- and dual-hose models, but gave a preference to the latter. With such a huge field of contenders, we decided to focus on models with a high energy-efficiency ratio, eliminating most with an EER below 9.0.

We then homed in on models with the strongest owner ratings, because good ratings usually indicate good reliability. A fair price for a portable AC with these features is somewhere in the range of $325 to $400 for single-hose, and $400 to $500 for dual-hose.

For our most recent tests we settled on eight finalists (five single-hose and three dual-hose) that were priced fairly and widely available at the time of our research, purchased them, and brought them in for testing: the Honeywell MN10CESWW, Honeywell HL10CES, Whynter ARC-12S, Black+Decker BPACT12WT, LG LP1217GSR, Haier HPND14XCT, Whynter ARC-14S, and Whynter Elite ARC-122DS. (We did not test the Elite ARC-122DHP—the version with the heater and drain pump—because its other components are identical to the ARC-122DS, according to Whynter.)

In the four years we've covered portable air conditioners, we've tested temperature, noise, humidity, airflow, efficiency, and portability. But in that time we haven't gotten any closer to developing a system that can reliably and consistently measure the cooling performance of a given model. This is an unusually difficult category for testing, and even the Department of Energy acknowledges in its 122-page Final Rule that there are simply too many variables influencing how well an AC performs.

That said, we did find a way to measure how much infiltration air a machine is likely to draw into a room. We used a handheld anemometer to get a basic air velocity rate (in feet per minute), then multiplied that figure by the duct area (in square feet), and weighted the results (as described here) to arrive at a general infiltration airflow measurement in cubic feet per minute.

To test noise, on the advice of audiovisual expert and Wirecutter contributor Geoff Morrison we connected a calibrated microphone to an iPhone 7, launched the SPLnFFT Noise Meter app, and set it to a C-weighting with a slow response.

We also hooked up each unit to a Kill A Watt electricity-usage meter to gauge the advertised energy use against the real-world figures. Finally, we did livability tests. We hauled the units around an apartment, comparing the maneuverability of the casters and how smoothly they rolled over thresholds and carpeting. If you need a portable air conditioner, we recommend the Whynter Elite ARC-122DS, a dual-hose unit. It's quiet for a dual-hose machine, and drew the least amount of infiltration air of any model we tested.

The Elite ARC-122DS has the best specs of any portable AC we've come across. It's a dual-hose model, with a category-leading energy efficiency ratio of 12.0, and a strong 12,000 Btu cooling capacity. As hard as it is for us to objectively measure performance, we did get a chance to try out the ARC-122DS on a 90 °F day—it made the room feel comfortable, for whatever that's worth.

In our 2018 tests the ARC-122DS produced some of the quietest decibel figures of any AC. The compressor, which initiates the cooling cycle, is by far the loudest part of any air conditioner. The ARC-122DS is noticeably more compact than its closest competitors, and much lighter, too.

In other aspects, the ARC-122DS is typical of dual-hose models. It comes with the same installation kit as our other finalists. The control scheme and remote control are also pretty much the same—no real complaints to note. Testing the same unit for the second year in a row, we didn't find any reliability problems; it worked just as well and showed no signs of wear and tear, even after carrying it up a flight of stairs, throwing it in the back of a car, and moving it to a different home on the other side of Boston.

The Whynter Elite ARC-122DHP is the same air conditioner as our main pick, with the addition of a heater and a drain pump. That means it can double as a space heater during cold weather, and automatically pump water out of the condensation tray, instead of needing manual emptying. If our main picks are unavailable, or their prices jump, the Haier HPND14XCT is a good alternative. It's got a higher cooling capacity (14,000 Btu) than our top picks, and in our testing it drew in the second-least infiltration air, meaning you can expect it to work quickly and efficiently. It's also the single quietest dual-hose AC we tested in 2018. If you're not super-concerned with performance during a heat wave, and just need something to take the edge off at night or in a small, overly warm apartment, the Honeywell HL10CES is a good option. It has one of the highest efficiency ratings we've seen, and it produced the single quietest operation of any AC we tested this year.

In this article: airconditioner, gear, home, honeywell, partner, portableac, syndicated, thewirecutter, whynter, wirecutter
All products recommended by Engadget are selected by our editorial team, independent of our parent company. Some of our stories include affiliate links. If you buy something through one of these links, we may earn an affiliate commission.