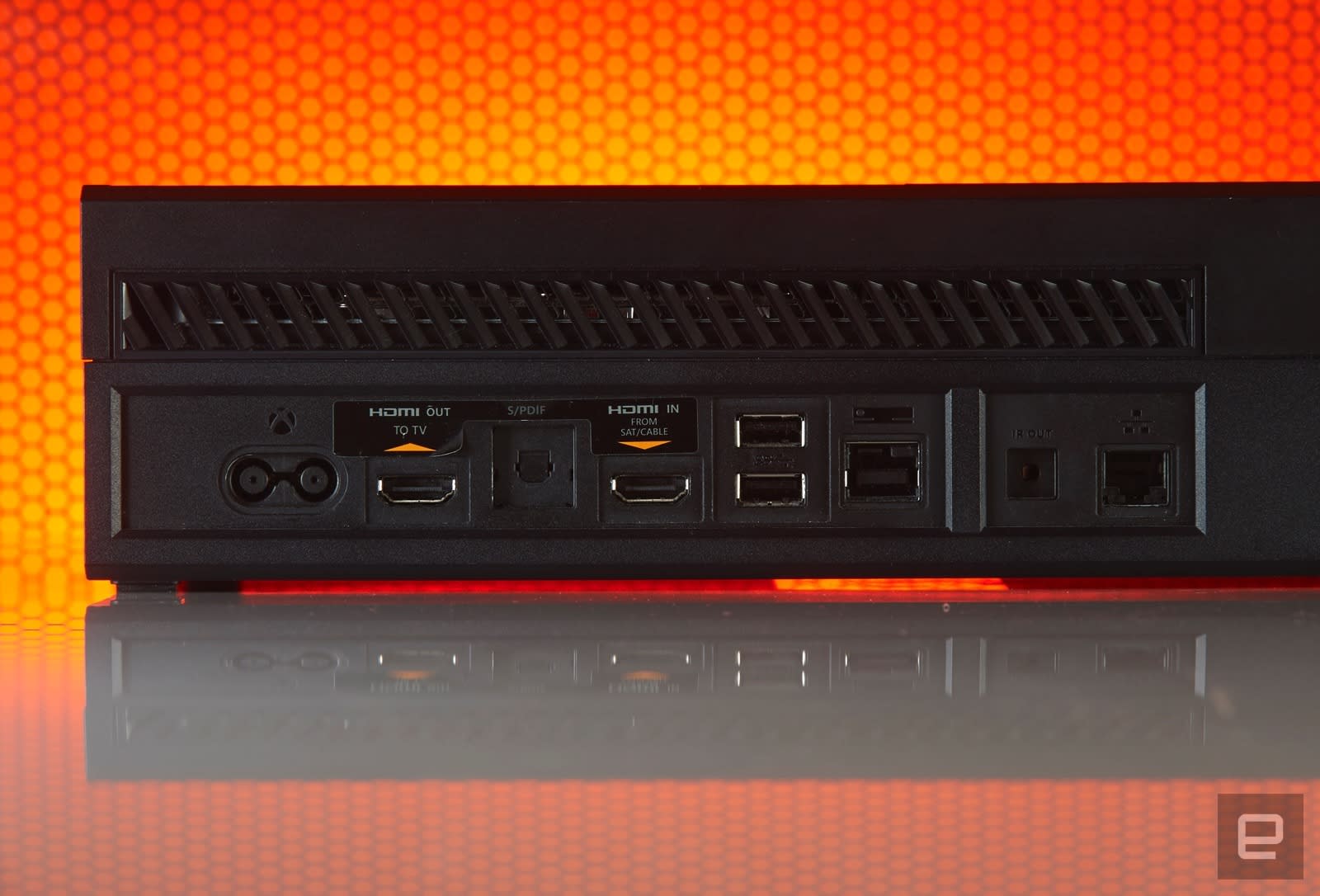 Microsoft was right in 2013: This is the always-on generation

Xbox was poised to dominate the eighth gaming cycle.

Microsoft lost its goddamn mind in 2013. It revealed the Xbox One on May 21st in a livestreamed press conference dedicated to its goals for gaming's long-awaited eighth generation. A lineup of executives in blazers hit the stage, punctuated by Microsoft Studios head Phil Spencer in a professorial sweater set, to extol the virtues of the company's first new console in seven years. With practiced smiles, they broke it down: The Xbox One and the new Kinect would be an all-in-one system providing television, sports and, of course, video games via an improved online ecosystem. The console was more powerful than ever and it would be constantly listening, waiting for the keyword that would turn it on without users having to touch a controller.

They didn't address the rumors swirling about the Xbox One's inability to play used games, its strict digital rights management (DRM), or the console's need to be constantly connected to the internet. Players were left wondering if they'd have to upgrade their internet plans, if they'd be able to play games brought over by friends, or whether they would actually own anything they purchased on the Xbox One. Instead of providing answers, Microsoft seemed content to bombard the audience with all of the shiny new TV and sports apps (and, yeah, some video games) coming to the Xbox One.

In a flurry of post-conference interviews and tweets, Xbox spokespeople contradicted one another and offered a confusing mosaic of the new console. Even before the stage show, one Microsoft employee, Adam Orth, lost his job after tweeting that players concerned about an always-on console should "#dealwithit." Fans -- well, potential fans -- lit up message boards and comment sections with anger and disbelief. Microsoft didn't clear things up at E3 2013 a month later. Its press conference showed off a lineup of games and exclusive deals, but no one discussed how the Xbox One's DRM features would actually work. The audience gasped when Spencer announced the console's lofty $500 price tag. Conflicting interviews with executives on the ground painted a strange picture of the console: It wouldn't need to be constantly connected to the internet, but it would need to ping Microsoft's servers at least once a day. Games would be tied to players' Xbox Live accounts, which made trade-ins tricky and impossible in some cases, and sharing games with friends was a month-long ordeal -- and each game could only be given out once. DRM became a four-letter word: Players felt that under this new system, they wouldn't actually own the games they purchased, and Microsoft did little to dissuade this notion.

And then Don Mattrick, the president of Microsoft's Interactive Entertainment Business, made things worse. In a June 12th interview, he belittled players' concerns about an always-on console, asserting that the only gaming fans without reliable internet connections lived in extreme circumstances, like on nuclear submarines.

"Fortunately we have a product for people who aren't able to get some form of connectivity -- it's called Xbox 360," Mattrick said. By July 1st, Mattrick had left Microsoft to become the CEO of Zynga. Meanwhile, at E3 2013, Microsoft's competitors were lapping up the schadenfreude. Sony took particular advantage of Microsoft's missteps and threw one of the most memorable press conferences in the convention's history. Without naming the Xbox One, executives laid out a list of things the PlayStation 4, its eighth-generation console, would be able to do: Function without an internet connection, play used games and take advantage of new cloud computing opportunities. Plus, it cost just $400.

To add insult to injury, Sony trolled Microsoft with a short video demonstrating how players would be able to share games on the PS4 -- by simply handing the game disc to a friend. Today, that video has more than 16 million views on YouTube.

A week after E3, Microsoft announced a new plan: It would reverse the always-on DRM scheme and transition back to Xbox 360-era practices. Although the console would require a day-one online update, there were no more daily connection pings, no more restrictions on used games or sharing, and no region-specific limitations. Less than four months before the Xbox One's debut, developers worked overtime to build out a brand new console ecosystem.

No one would argue Microsoft didn't mess up in 2013, but looking back on five years of computational advances and widespread internet adoption, it seems like the company was onto something with an always-on Xbox One. Its original vision for the eighth console generation has come true. Fortunately we have a product for people who aren't able to get some form of connectivity -- it's called Xbox 360.

The internet has seeped its way into every aspect of our daily lives and Microsoft would have been perfectly positioned to take full advantage of this new environment with the Xbox One, had it just stuck to its harebrained, poorly packaged scheme.

Today, the Xbox One, PS4 and even Nintendo Switch are all online-focused consoles, with the bulk of their entertainment options tied directly to streaming or live online services. Many of the top games today only work online, including League of Legends, Overwatch, Fortnite, Dota 2, PUBG, Rust, Roblox and multiplayer Battlefield, Star Wars Battlefront and Call of Duty iterations. Even games that don't have online components receive regular updates via an internet connection, often on day one. Esports -- games of high skill played against people around the world -- have exploded in popularity. Netflix, the most-used app on the Xbox ecosystem, today has 125 million subscribers and is valued at more than $140 billion, competing directly with giants like Disney and Comcast. Twitch, owned by Amazon since 2014, is a global livestreaming phenomenon with more than 15 million daily active viewers.

Our online world has changed drastically in the past five years and the gaming industry has done a fairly good job of keeping up, taking advantage of better connections and more widespread internet adoption, and generally pushing the technology industry to evolve.

Now imagine the street cred Microsoft would have if it had pressed forward with its online version of the future -- and actually succeeded in selling it to the public. Digital distribution is the norm in video games, and Microsoft saw it coming. The Xbox One was built with non-physical games in mind, which helps explain its original restrictive policy on used-game sharing -- it was already basically impossible to share digital games with friends, regardless of the platform, and Microsoft was treating every game like a digital version. Even physical copies would be downloaded, installed, and tied to a player's gamertag, allowing them to access it on any Xbox One console, just like players had been doing for years with Steam on PCs.

Allowing physical games to be given away once after this process was generous, from a digital-first standpoint. Plus, with a constant (or at least regular) internet connection, players could share their entire digital libraries with friends at the tap of a button.

The Xbox One probably wouldn't operate very differently today had Microsoft stuck with its original plan. Players can share their libraries with friends, download games to their Xbox accounts and take them to other consoles, and stream media all day long if they'd like. But maybe Microsoft's dedication to digital gaming would have paid off in unforeseen ways. It could put more pressure on the PS4 to play catch-up -- maybe Sony would have given in to demands for cross-console play by now. It is the lone holdout in that regard, after all.

Microsoft had a wild idea, and looking back, it was a good one. However, selling DRM to video game fans isn't easy, and Xbox leaders took every wrong turn they saw. They could have laid out a clear vision of gaming's digital future, expressed all of the benefits this system could bestow upon players, and then branded the Xbox One as the only console capable of fully delivering on this promise. Players simply wanted to buy into a future they could believe in, and the Xbox crew couldn't keep its story straight.

Look at it this way: Just one year after Microsoft's disastrous Xbox One reveal, Sony stole E3 once again with the announcement of No Man's Sky, a gorgeous-looking indie game that promised to drop players into a vast, constantly connected universe where their discoveries could be shared with explorers around the globe. There was an offline mode, but the game's online aspects were key. No Man's Sky lit E3 on fire, drumming up waves of excitement that propelled the creator to instant video game stardom, landing him a private meeting with Elon Musk and a spot on The Late Show with Stephen Colbert. Few people expressed concern about the game's reliance on online connectivity -- they simply wanted to dive in. Sony sold the dream, rather than the process, and it worked (even though No Man's Sky's most ambitious promises didn't pan out right away).

The excitement for an online gaming ecosystem was there. Players wanted it, even if they didn't know it yet, even if they didn't believe the infrastructure could support it. In 2013, 70 percent of US adults had broadband at home, up from about 55 percent in 2008. Today, that figure has plateaued -- a 70 percent internet-adoption rate seems to be the sustainable, attainable sweet spot in the US. And, it's most certainly higher among people who regularly play video games. The market was ready in 2013. Xbox just didn't prove that fact to anyone.

Microsoft will have another chance, and probably a few more after that, to get the online-console-gaming thing right. The next Xbox, whatever it may be, will surely be packed with apps and games that will only work with an internet connection. Luckily for Phil Spencer, who is now the head of Xbox, players today are used to being constantly connected. Not only that, they expect it. An always-on Xbox isn't much of a stretch any longer. In fact, it's already a reality.