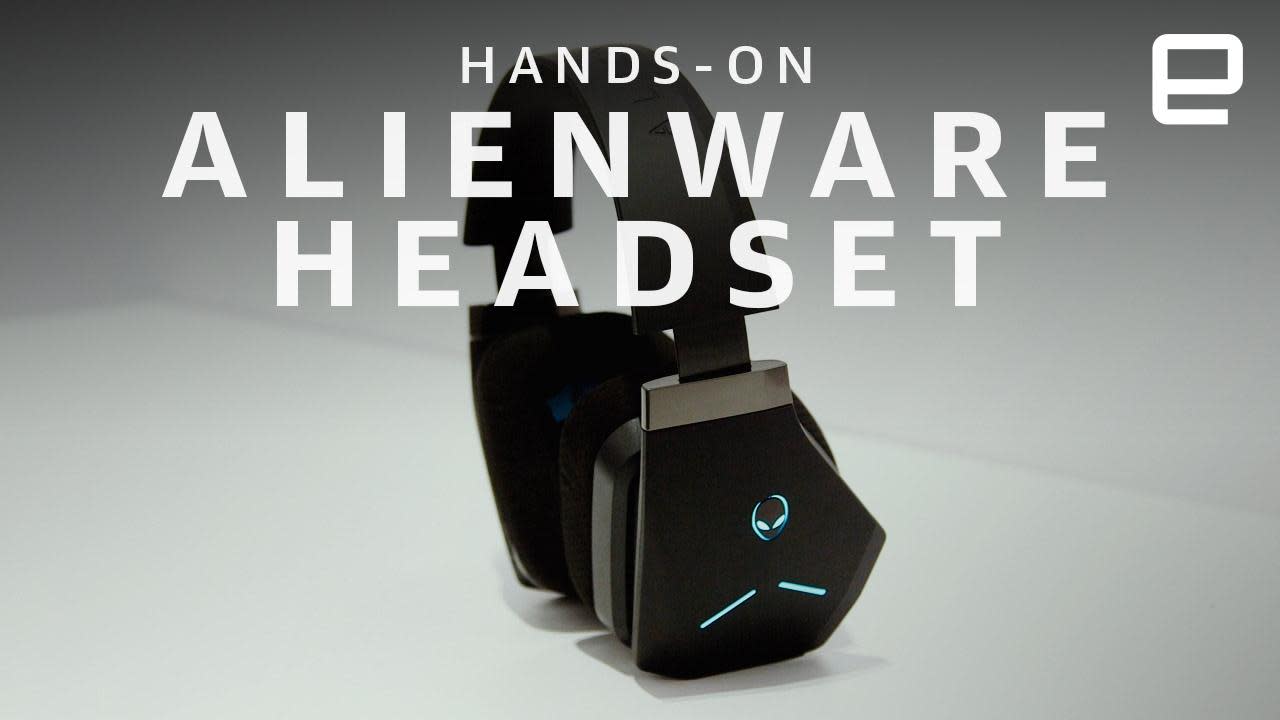 If you're going to be playing Fornite for hours at a time, you need a headset that not only sounds good, but is also super comfy. Alienware revealed its Wireless Gaming Headset last week ahead of E3, but today I got to briefly test its merits. I'll admit when I first saw it last week, I wasn't blown away with the overall design. But as I would find out on the show floor, the company built a solid and capable gaming accessory here.

Like a lot of gaming headsets, Alienware's latest looks big and bulky. Despite that overall appearance, the Wireless Gaming Headset is actually quite lightweight. Indeed, there isn't a lot of extra heft to it, a quality that will go a long way in keeping you comfortable during longer sessions. The soft cushy earpads are also wrapped in a moisture-wicking sports mesh material. The company combined all of that with a soft-touch headband that feels more like an airbag than a cushion. And that headband isn't so tight that it feels like it's pinching in on your head. In other words, comfort will be the least of your concerns here.

In terms of overall sound, Alienware's use of virtual 7.1 surround sound is solid. During a video clip of Final Fantasy, the audio was crisp and clear, and I could really get a sense of what was happening where in the virtual world. I just had a demo of the Audeze Mobius a couple days ago, so my expectations for gaming headsets are super high now. It's an unfair comparison, I know. Even with my lofty new standards, Alienware's Wireless Gaming Headset performed admirably in the few minutes I used it. With the Alienware headset app, a feature called audio recon will help you pinpoint enemies and other hazards based on the sounds they're making. That same app will allow you to customize the AlienFX lighting on the outside of the earcups, tweak the audio EQ and more. There's also in-game AlienFX lighting for over 160 titles, options that will change those hues based on your current surroundings or situation.

You never want to have to put a controller down or have to navigate away from a game to make audio tweaks, so like many other headsets, Alienware has included some handy on-board controls. There is a mixer wheel for finding the right blend of chat and game audio, a microphone mute button and a volume wheel on the back edge of the left earcup. Along the bottom on that side, there is a button for toggling through EQ/game audio presets, USB port for charging and a 3.5mm jack for wired use. The microphone is also on the left -- a flexible feature that tucks back along the edge of the earcup when you don't need it. It doesn't detach, but hey, there's less of a chance you'll lose it this way.

On the bottom of the right earcup, there's a slot for for the USB adapter you'll need to plug in for 2.4GHz wireless connectivity. It's not a huge thing, but it's nice that Alienware thought to include a handy carrying spot for the tiny but essential accessory.

Alienware's Wireless Gaming Headset is a capable option for private in-game audio and other casual listening. It's very comfortable and the audio will certainly help you get a bit more into the game. There's no Bluetooth, so you won't be using these as a wireless set of headphone when you're out and about. If you still have a headphone jack though, you certainly could use them wired. If all of that sounds too good to pass up, the headset is on sale now for $230. In this article: alienware, alienwarewirelessgamingheadset, audio, av, dell, e32018, entertainment, gaming, gear, headset
All products recommended by Engadget are selected by our editorial team, independent of our parent company. Some of our stories include affiliate links. If you buy something through one of these links, we may earn an affiliate commission.