'Bloodstained' will scratch your 'Castlevania' itch

Castlevania: Symphony of the Night (SotN) is one of the most influential games ever made. First released for the original PlayStation in 1997, the game has since been ported to nearly every platform under the sun. It perfected the series' core design concept where players could explore gigantic 2D environments at will, collecting new abilities that unlocked hidden-in-plain-sight secrets in previously traversed areas. It also iterated on the superb Super Metroid released for the SNES three years prior.

That framework was so well-done that it spawned its own genre ("Metroidvania") and countless games have used it since. Koji Igarashi, SotN's co-creator, has finally brought his crowdfunded (and SotN spiritual successor) Bloodstained: Ritual of the Night to E3. How does it play? Pretty close to the original.

If you've played SotN or any of its contemporaries like Axiom Verge or Shadow Complex you know what to expect. Controls should be mostly familiar too. Using an Xbox-style gamepad for my demo, X handled attacks and A was for jumping, while magic attacks were mapped to Y and the right trigger.

My admittedly brief demo took place on a boat infested by all manner of ghastly creatures. I went from room to room as protagonist Miriam; clearing out harpy-like creatures and hulking, headless suits of armor on the main deck with edged weapons and fisticuffs. I then jumped downward through platforms and took the fight to jellyfish and barnacle-covered cannons below decks.

It's worth noting that I didn't encounter any of the "get skill to unlock new area" tropes the genre is known for. But with each new area I entered, the mini-map in the upper right corner of the screen filled in. Once or twice, it showed doorways that weren't visible in the game with my current loadout, a coy tease that there were plenty of secrets tucked away in the haunted ship. I leveled up a handful of times and found a bunch of new gear (including a pair of "kung-fu boots" that increased my kicking damage), too. When it comes to magic, spells are called "Shards" in Bloodstained parlance, and I unlocked both fire and ice incantations. Combat is light and quick, and the aforementioned ice magic attack can counter the possessed cannon's salvos.

My only gripe is that I couldn't quite get the timing right to successfully evade incoming attacks. That the evade command (a quick jump backward) was awkwardly mapped to the left bumper button didn't help either. The placement is even more perplexing considering the B button doesn't have a function assigned to it.

For run-of-the-mill enemy encounters it wasn't too big of a deal. Once I found a weapon that worked for my play style -- a rapier -- I didn't take much damage. Its longer range meant I didn't have to be nearly as close while attacking enemies, and thus, offered a bit of protection compared to attacking bare-handed. And, unlike the claymore which covered even more range and did more damage, the comparatively smaller sword wasn't slow to swing. 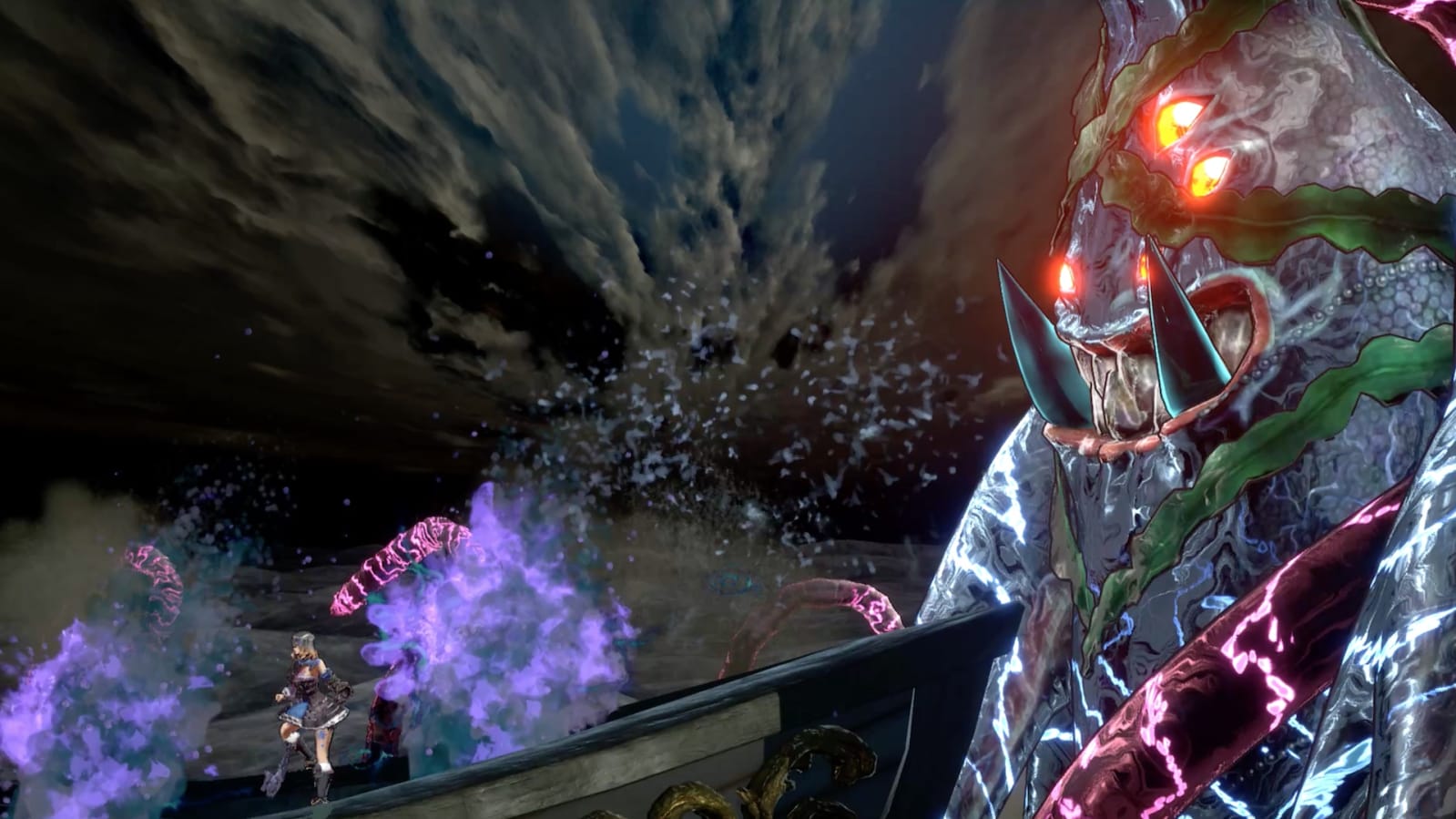 It's when I got to the boat's boss battle that things got tricky and I started dying repeatedly. Back on the main deck, neon pink and purple tentacles rose out of the sea while a twisted naked female humanoid creature with a grotesque toothy maw for a stomach towered over me and knocked the vessel about. Try as I did (four times, to be exact) I couldn't figure out how to fell the beast before my demo ended.

Based on what I played, the game doesn't feel like it needs much more work, aside from localizing cutscene text. But, will anyone beyond the 64,000 fans who enthusiastically pumped almost $6 million into the game's $500,000 Kickstarter project care?

In 2015, Ori and the Blind Forest and Axiom Verge were both released, and the former sold well enough to get a sequel that's slated for next year. Neither of those broke out of their niche audiences, but, maybe, they don't have to. Remedy Entertainment is hoping people are still interested, though, and are using this Metroidvania framework as the linchpin for its next AAA title Control, which is also scheduled for release next year.

Bloodstained still still doesn't have a release date beyond an ambiguous 2018 window, but I was told that should change soon.