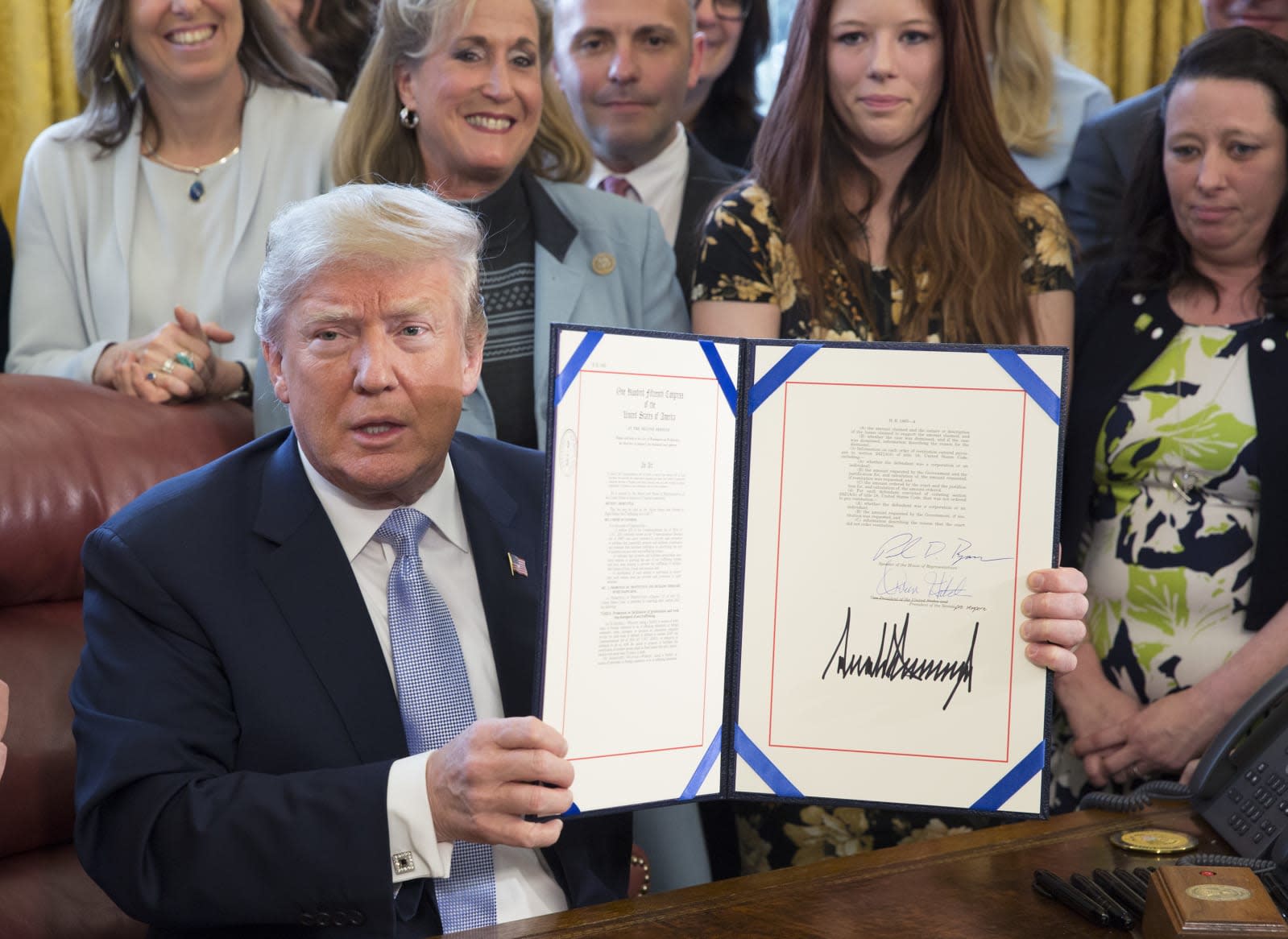 The Electronic Frontier Foundation (EFF) and a number of other organizations and individuals have filed a lawsuit asking for FOSTA to be declared unconstitutional, with the EFF saying the law was "written so poorly that it actually criminalizes a substantial amount of protected speech." They're also pursuing an injunction that would prevent FOSTA from being enforced while a court considers the case. FOSTA was signed into law in April and though it claims to be an effort to stop sex trafficking, the flawed legislation features broad language, conflates sex trafficking and sex work and by many accounts, actually makes fighting sex trafficking more difficult. Among those speaking out against FOSTA and its sister bill SESTA were the ACLU, the Department of Justice, sex work rights organizations and sex trafficking victims groups.

"Although the law was passed by Congress for the worthy purpose of fighting sex trafficking, its broad language makes criminal of those who advocate for and provide resources to adult, consensual sex workers and actually hinders efforts to prosecute sex traffickers and aid victims," the EFF said in a statement. In their lawsuit, the plaintiffs note, "The law erroneously conflates all sex work with trafficking. By employing expansive and undefined terms to regulate online speech, backed by the threat of heavy criminal penalties and civil liability, FOSTA casts a pall over any online communication with even remote connections to sexual relations. It has impeded efforts to prevent trafficking and rescue victims, and has only made all forms of sex work more dangerous."

Two plaintiffs, Human Rights Watch and the Woodhull Freedom Foundation, advocate for sex workers, but FOSTA and its broad language has both concerned they could be prosecuted for "facilitating" sex work. There's also concern regarding Woodhull Freedom Foundation's annual Sexual Freedom Summit, set to take place in early August, and whether promotion of it violates FOSTA. Jesse Maley, another plaintiff, has similar fears, as she's the co-founder of a website that helps sex workers find organizations and services they can trust.

Massage therapist Eric Koszyk also joined the lawsuit, claiming that when Craiglist shut down its Therapeutics Services section because of FOSTA, he lost his main method of advertisement, causing harm to his business. The Internet Archive is suing as well, citing concerns that FOSTA will cause it to become "subject to federal criminal, state criminal and civil liability" since some third-party content on its site "could be construed as promoting or facilitating prostitution, or assisting, supporting or facilitating sex trafficking."

The plaintiffs are seeking an injunction by August 1st so that Woodhull can run its summit without fear of prosecution. They're also seeking to have FOSTA declared unconstitutional under the First and Fifth Amendments.

In this article: ElectronicFrontierFoundation, fosta, FOSTA-SESTA, gear, humanrightswatch, internet, InternetArchive, lawsuit, politics, sextrafficking, SexWork, unconstitutional
All products recommended by Engadget are selected by our editorial team, independent of our parent company. Some of our stories include affiliate links. If you buy something through one of these links, we may earn an affiliate commission.