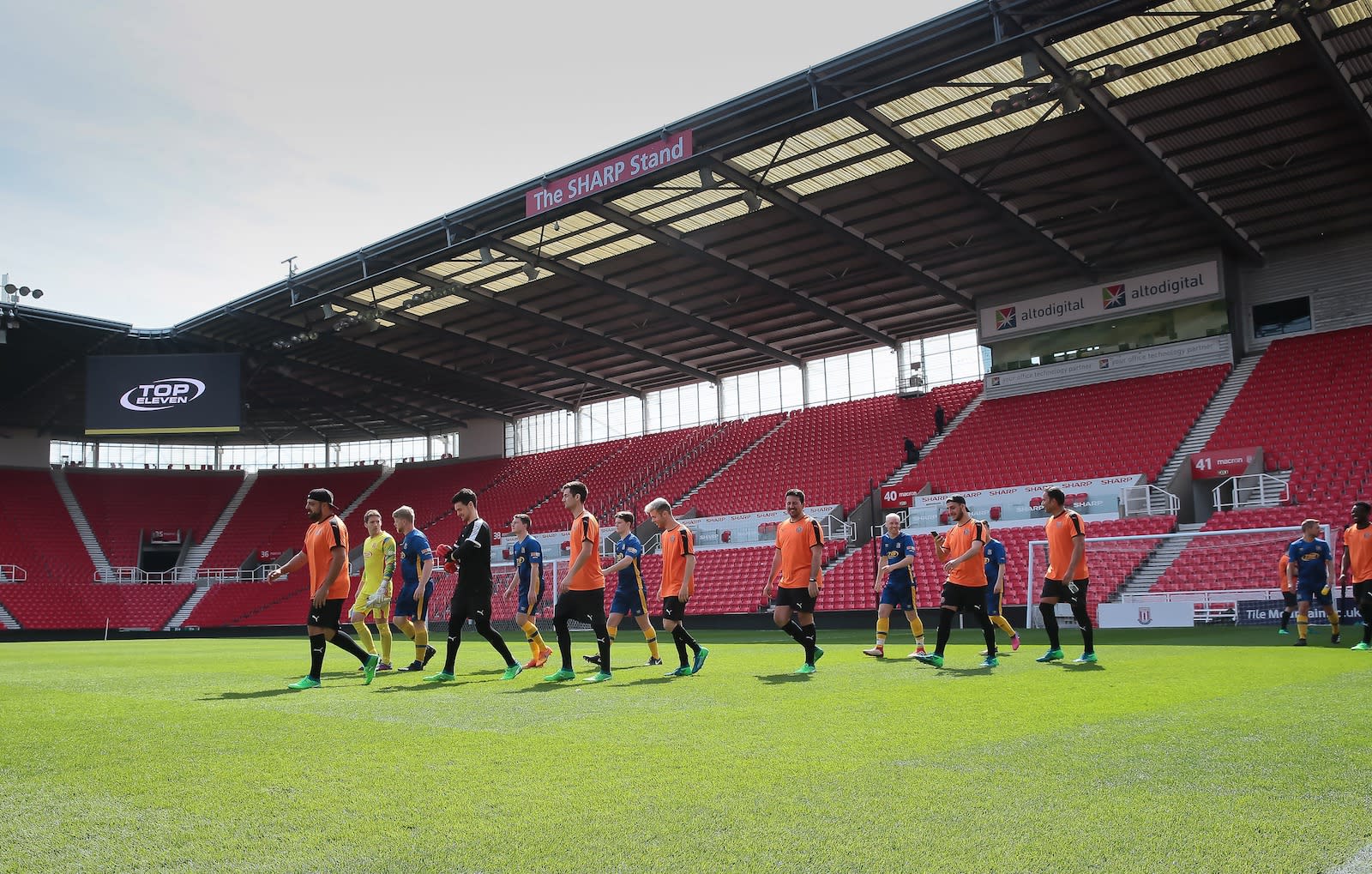 Hashtag United and the new world of startup soccer

There is an English soccer team which has toured the US and Spain, seen hundreds of thousands of fans tune into their weekend matches and played in some of the sport's most hallowed arenas against stars like Steven Gerrard. The team's captain alone has more YouTube followers than the official account of Manchester United, the world's highest earning club.

They have yet to play their first official match.

This is Hashtag United, the two-year-old club from Essex, England, who are about to enter the tenth tier of English soccer -- aka "football" in most of the world. They're the self-proclaimed "world's best-known amateur football team" whose unlikely rise is entirely the result of YouTube, where they post all their games.

If you've caught the World Cup lately, you'll have witnessed elite football. Hashtag United's games are not that. The carpenters, bankers and engineers of the team certainly play better than your average pick-up ensemble, but you'll also see two players leaping to head a goal kick where both miss it completely.

Hashtag United's finesse, instead, is in the packaging. They have the hallmarks of a real match-day broadcast: the lineup graphics, goal replays, commentary (added after the game) and sweaty interviews in front of sponsor branding. Since 2016, the team has posted videos of their own imaginary league, where they pick their opposition -- amateurs, celebrities, corporations, YouTubers. No one else plays in the league; Hashtag United set rewards and punishments for their team alone.

Incentives have included a sponsored tour of the US for winning a grudge match against their coarser YouTube rivals, Palmers FC (who call themselves "everyone's second-favorite football team"), or losing a player for failing to reach a goals threshold. Usually, they play to empty stands to prevent scores from leaking before they can edit the match footage. The whole thing unfolds on YouTube as part-reality TV, part-football highlights show.

The combination of smooth production and the grubby performance makes Hashtag United compelling viewing. The former emphasizes the latter: Here's how grassroots players look when given all the modern football aesthetics. And with Hashtag United, you never know what to expect -- sublime diving headers or sloppy ball control -- which raises the tension.

For most players, that's the real-life experience of football. Watching Messi, Ronaldo, Salah and co. is otherworldly -- enjoyable because of their inhuman feats, but also somewhat unbelievable. (A related delight in Hashtag United's videos is seeing ex-pros plod around a bobbly turf and look like that's exactly where they belong.) The rise of Hashtag United actually runs counter to perhaps the most elemental assumption about competitive sports: That to be successful, you have to play well. 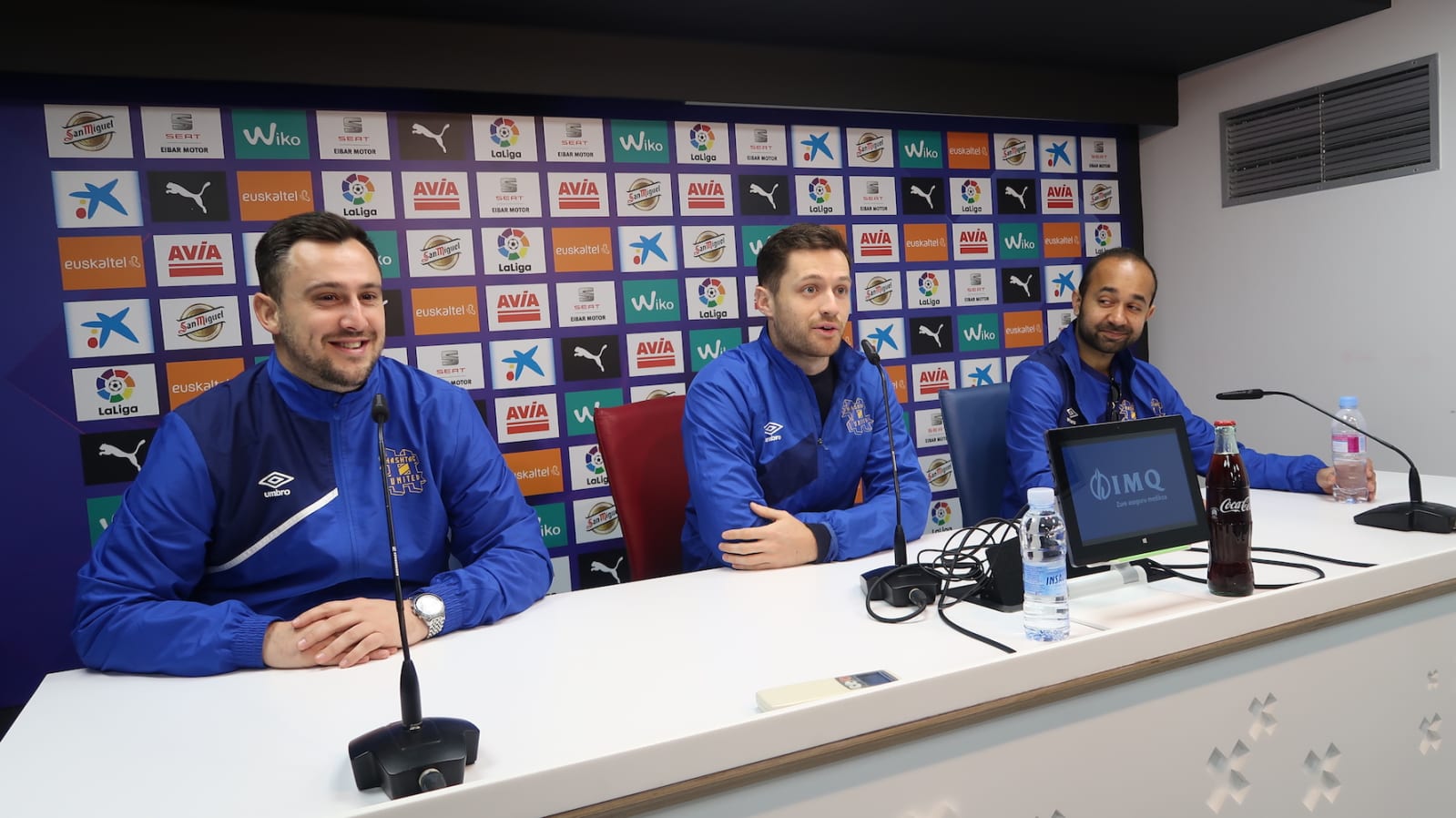 The founder, commentator, full back and main public face of Hashtag United is Spencer Owen. Before starting the club, he managed social media for star Manchester City and Belgium defender Vincent Kompany and worked for football media company COPA90. Meanwhile, he developed his own YouTube channel, where he played a lot of the videogame FIFA. "My main passions growing up were playing football computer games and playing football," Owen told Engadget. "I've always wanted to have a football club."

In 2015, age 26, Owen organized on a charity football game starring YouTubers called The Wembley Cup. He followed that with a memorial match with friends on the anniversary of the death of two teammates they had played with as kids. Both matches were uploaded to his channel -- commentary, graphics and all -- and he realized he was on to something.

The Wembley Cup would continue year after year -- eventually drawing former Liverpool captain Gerrard and other ex-pros -- while Hashtag United launched in 2016. Today they employ around ten staff and put out more than highlights packages. Between Owen's channel and the official team one -- both of which cover Hashtag United -- there're also trick shots, eSports (they've signed FIFA players), catchphrases, petty rivalries and banter with the camera.

They mine the team's decision making for content. To choose who should be the designated free-kick taker, they filmed an elimination "challenge" for the teammates to compete in. When they wanted to recruit new players, they made an open call, received 20,000 applicants and turned the process into an episodic talent show called Hashtag Academy.

The way we consume pro-sports has always been about narrative -- winners and losers, comebacks, revenge. But in the digital media age, there are so many ways to follow a team beyond their 90-minute weekend matches. The story, brand and personality of a football club may even overshadow their actual performances on the pitch.

"I think people follow soccer more than they watch soccer now," said Shawn Francis, who used to run social media for Major League Soccer. "Something like Hashtag United... people might like the idea -- that is enough for them."

Francis would know. Besides working as a social media director at a creative agency, he is a co-founder of Asbury Park FC, which is more or less the ultimate postmodern club: One which has no team. The New Jersey outfit sells its own $80 Umbro jerseys to a modest fanbase but plays no matches. The club is pure optics and lifestyle brand.

"All the trappings of modern soccer without actually fielding 11 people on a field," Francis said. "As someone who works in marketing for a living, it's amazing... It's like getting people excited about a car that doesn't drive."

Most sports teams get really good at the game first. Then, with bigger budgets, they cultivate social media fame, turning their star players into TV and online personalities, while perhaps signing eSports players that wear the team shirt and preach their brand.

Teams like Hashtag United and Asbury Park FC are a complete inversion. These digital-native clubs begin with the story, the web videos. Francis says Asbury Park have no intention of fielding an actual team. But Hashtag United, who are about to join the official English football pyramid, represents the triumph of narrative in sports over achievement. Their success off the field has preceded any success on it. 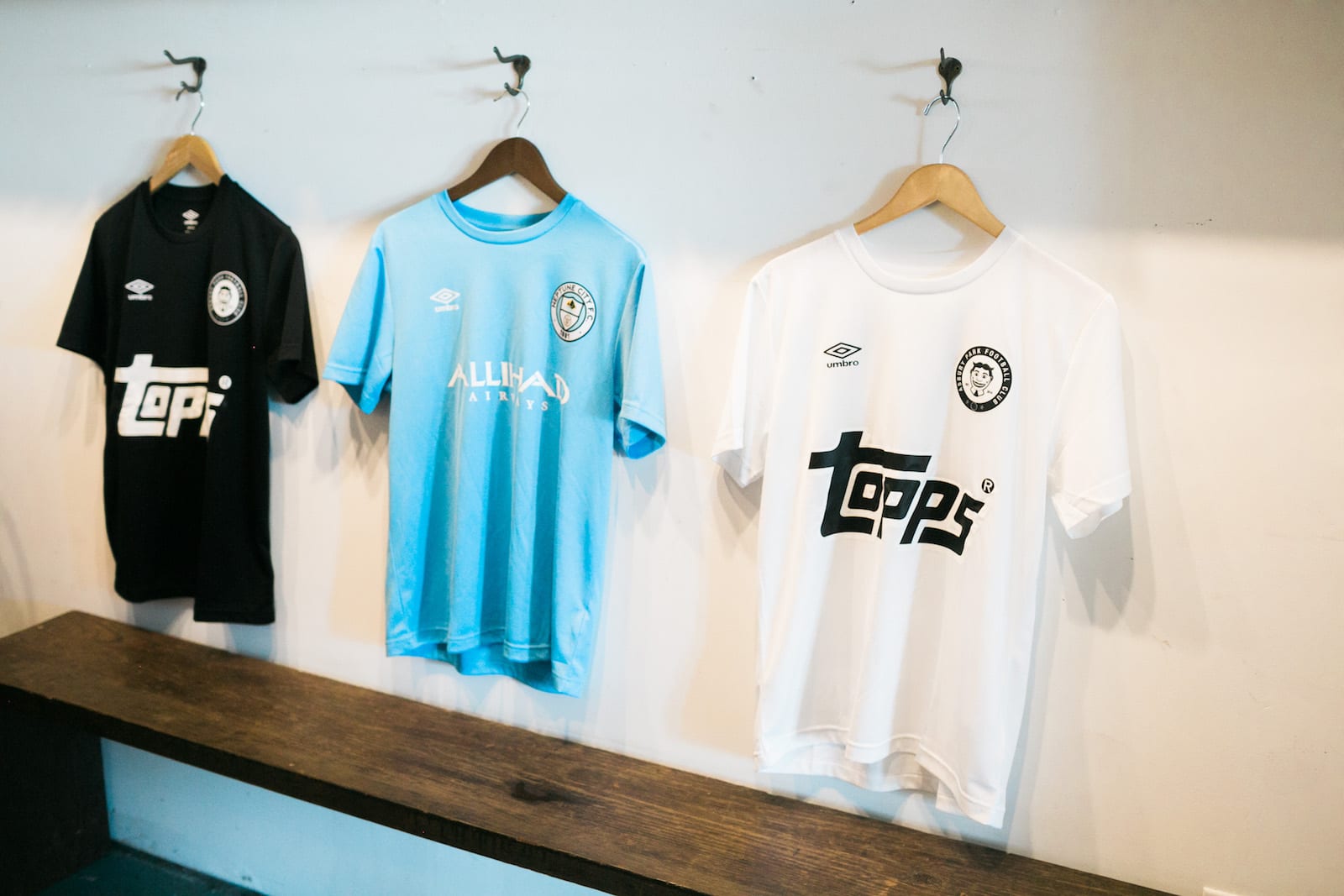 Every good story needs to keep moving forward to survive. While Hashtag United didn't even exist the last time we had a World Cup, it's easy for their fake league model to go stale quickly. Owen's team talks encouraging "promotion" to another artificial construct doesn't do a lot for drama. This August, Hashtag United will enter the Eastern Senior League, nine levels below the Premier League where powerhouse clubs like Manchester City, Liverpool and Arsenal reside. Theoretically, albeit improbably, Hashtag United could be playing alongside them in under a decade.

For Dennis Crowley, to even have this slim hope would be a dream. The co-founder and executive chairman of Foursquare kicked off a new project in 2016: a startup club in upstate New York which he runs out of his garage.

True to their tech roots, Kingston Stockade FC also streams their home games on YouTube, posts match reports on their website and aims to put every goal on Instagram. "We kind of want to make the guys local celebrities... The guys get recognized when they go to the supermarket, the guys get recognized when they're at the bar," said Crowley, who's been playing pickup for the last ten years but says he's "consistently the worst person on the pitch."

But the most unique element of Stockade FC is in what Crowley calls "open-source soccer." As Hashtag United have done for YouTube teams, Crowley is creating a blueprint for how a grassroots team in the US can operate as a business, which others can replicate.

He documents the club's finances meticulously on Medium (their budget is around $100,000), floating ideas on potential revenue streams and strategies ("adding food trucks, moving the beer tent closer to the stadium, setting a Farmer's Market up inside our gates") and describing the thought process behind jersey designs (the pattern is a topographical map of Kingston).

The team play in the National Premier Soccer League, three levels below MLS, but in a system that doesn't promote or relegate teams -- unlike every other major soccer league worldwide. Clubs here pay to enter a league -- the latest MLS fee was $150 million while NPSL entry costs $12,500. Crowley has become a crusader for promotion and relegation in American soccer, accusing MLS of violating FIFA's rules in the Court of Arbitration for Sports last year. He hopes that if new teams sprout, NPSL will become more popular, possibly instituting promotion and relegation on their own and forcing MLS to either copy their system or collaborate.

If that sounds like another tech CEO seeking to disrupt a fat-cat incumbent (MLS) with a plucky startup, well, that's exactly how Crowley sees it too.

"You can't change that system. That system works for them. The only way to fix it is to make something from scratch," he said. "When you talk about doing this in tech, no one bats an eye about it. You talk about doing sports, everyone thinks you're fucking crazy."

He added: "I guarantee four years from now, this will not be under the radar. It'll be a thing that the MLS has to deal with."

Open-source and YouTube clubs are just the latest attempt to break the pro-sports status quo. Alternative clubs have infiltrated the system already. FC United of Manchester and AFC Wimbledon are both fan-owned clubs in the UK which broke away from their namesakes over a decade ago out of frustration with their corporatization. AFC Wimbledon have even climbed a league higher than their predecessor, which left town and renamed to MK Dons. 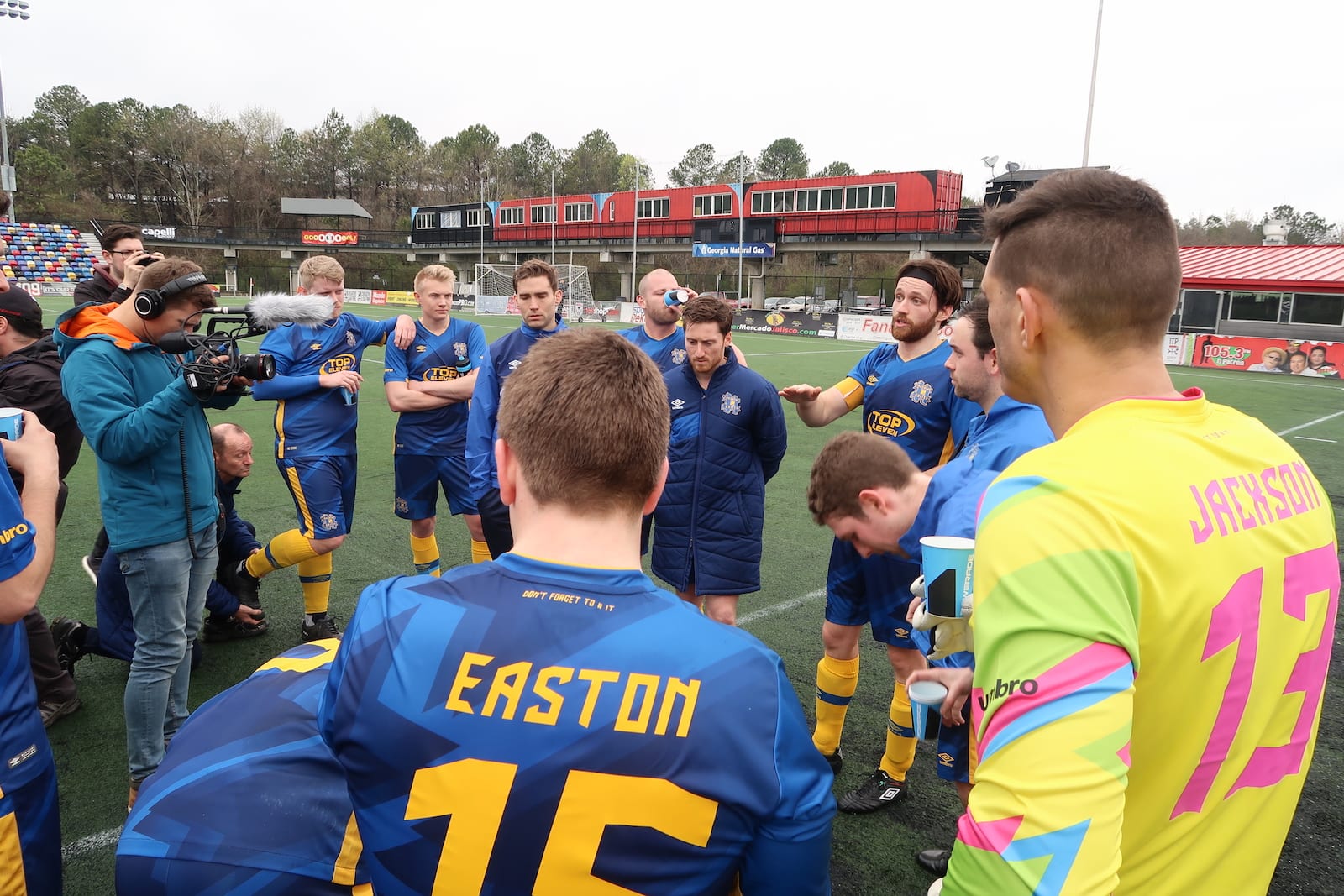 The obvious challenge Hashtag United face is a more competitive league and rigorous game schedule. Can they best tougher opposition on a cold, rainy Tuesday in Essex? "They're going to want to beat us more than anyone else," Owen said. "They know it's going to be a big audience watching."

Yet the greater hurdle might actually be the loss of authorial control for Hashtag United's production crew: whether they can handle the loss of freedom to cherry pick opponents and selectively edit their match footage. Instead of playing behind closed doors, anyone can turn up to their games now.

"We're a content business as much as we are a results business," Owen said. "Of course, we all want to win titles. That's never going to change. But we have a separate responsibility that no other football clubs have."

If anything, their new direction seems like a throwback to East Thurrock United, one of Owen's early-20s YouTube passion projects. Published in 2013, it's a documentary mini-series following the lower league club where his father was the team physio. Owen commentates but in the cadence of a BBC sportscaster, not a jocular online personality. The half-time team talks are crunchy with expletives. One post-match interview with the club secretary is filmed pitch-side under an umbrella, ending with him fetching a hunk of sodden turf from the pitch and stamping it back into the earth, gray British rain pattering in the background.

It's a window into what it takes to run a low-level English football side, warts and all. It may not be glamorous, but it's still a good story.

All products recommended by Engadget are selected by our editorial team, independent of our parent company. Some of our stories include affiliate links. If you buy something through one of these links, we may earn an affiliate commission. All prices are correct at the time of publishing.
View All Comments
Hashtag United and the new world of startup soccer
asburyparkfc
DennisCrowley
entertainment
hashtagunited
internet
kingstonstockade
longread
youtube