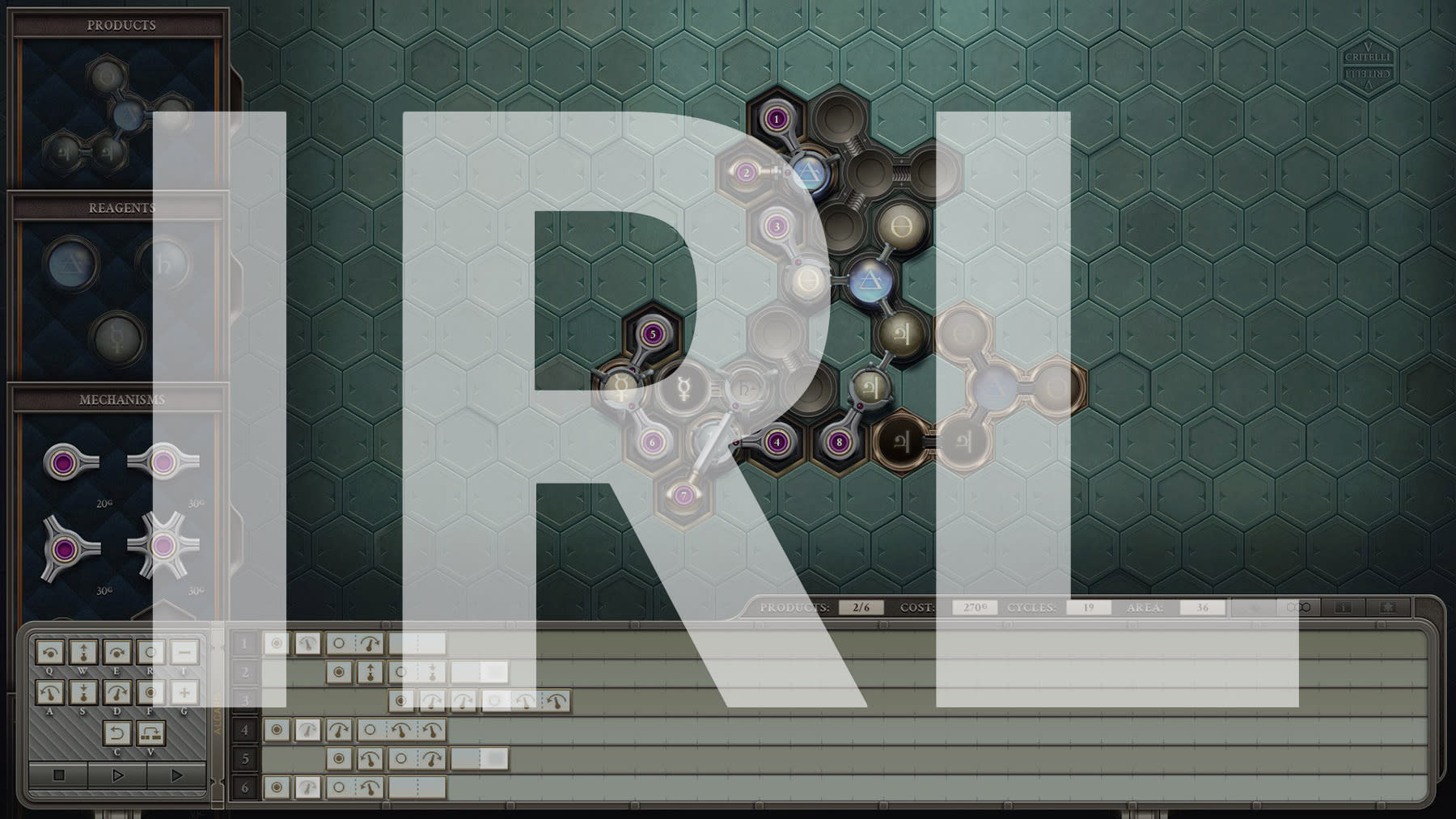 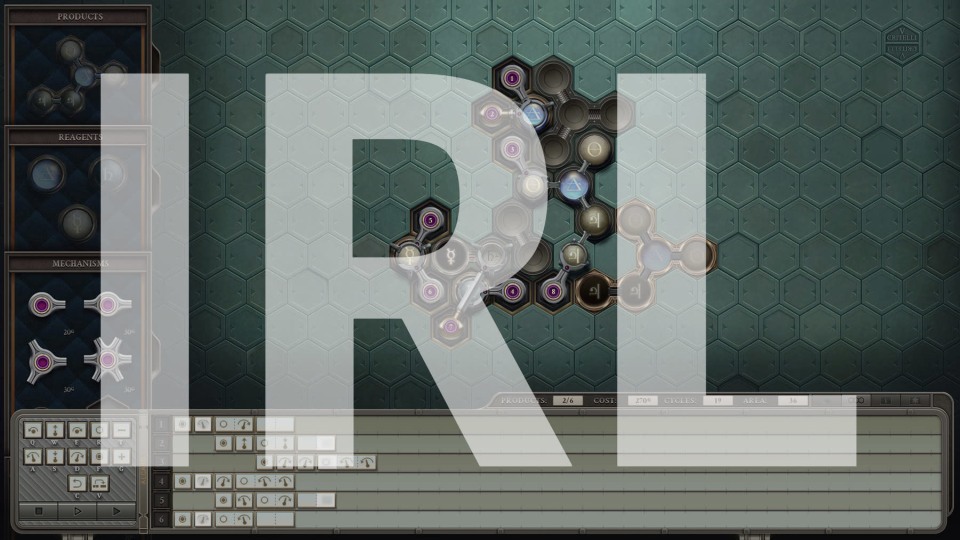 I'm not sure how Opus Magnum passed me by when it came to Steam Early Access last year. All I know is that I saw a split-second of it in a YouTube video a few weeks ago and have been obsessed since.

Opus Magnum is, like many of developer Zachtronics Industries' releases, a puzzle game centered on engineering. You play a young alchemist, tasked with creating elemental compounds for your employers in a time of conflict. As the story plays out, you become stuck between various factions and your creations are used for nefarious purposes. But the narrative, while well-written and capable of providing some respite between challenges, is far from the attraction here.

The core gameplay loop is simple to understand. A level gives you a set number of elements as inputs, and tells you what your output needs to be. You're given an infinite hex grid to build a machine that turns the input into the output. The basic tools at your disposal include arms, pistons and tracks that objects can travel along. There are also blocks that can modify or bond elements together. Once you've placed your tools, you have to program them by adding icons to a timeline. All arms can rotate themselves or what they're holding, piston arms can extend and retract, and if something's on a track, you can tell it what direction to move in. Although everything costs gold, there's no limit to how much you can spend on a machine.

For the first few chapters, the level of difficulty is remarkably low. Usually this might make for a dull introduction to a game, but as well as serving as an easy-going tutorial of sorts for the mechanics, these simple levels serve as a perfect demonstration of why this game is so special.

After you've successfully navigated a challenge, you're given a rundown of your machine: how much it cost, how much space it took and how many cycles it took to produce the output. Opus Magnum then puts these figures in context, with three histograms showing where your creation falls against the rest of the world, and, if applicable, any friends you have that have played the game.

It's unlikely, if not impossible, for a machine to top all three charts. Instead, you decide if you'd rather create a very simple machine, or one that's very compact. Or perhaps something complex, but unfathomably fast? The direction you take is entirely up to you; the game only tells you "there's a better way of doing this."

Let's take a very early level as an example. You're tasked with creating gold by merging iron and quicksilver together. A simple approach is to take one piston arm, pick up some iron, drop it, then load five quicksilver into the bonding tool. You then grab the gold you've just created and place it in the output section, like so:

This solution, as the stats beneath it suggest, takes 178 cycles to produce the required six gold, and only takes up six hexes. Looking at it now, I know I could've used a standard rotating arm instead of a piston and saved a little cash, but that's beside the point. How do I make it faster?

The above solution was my next attempt, and it's pretty efficient. Here I use three rotating arms, which lets me very quickly load quicksilver, cutting the number of cycles in half. But the histograms showed me I could go way faster.

So here I am, using an obscene number of arms to cut the cycles down to just 68. The actual time taken from first moving to depositing a piece of gold is the same. All the extra arms do here is decrease the time before the process begins again, by ensuring the arms that move first are ready to restart immediately. This is a terrible machine; there's definitely a more elegant way to craft a swift solution.

Creating one piece of gold is a very easy puzzle to solve, but I picked it because it perfectly demonstrates the pull of Opus Magnum. Even the more complex puzzles tend to take minutes rather than hours to solve, but you'll immediately be presented with a series of graphs showing your failings. In Opus Magnum, your biggest challenge is yourself, and your drive to perfect your solutions.

One thing I haven't mentioned is that, while no single solution can tick all the requisite boxes, the histograms that display on the level select screen take your lowest score across all your solutions, so it is possible to achieve a total "high score" across three solutions:

At least, it would be possible if I knew how. As you can see, I still have some work to do on this level. I already have a solution in my head for minimizing cost, but I honestly have no idea how I'm going to reduce the cycles. Yet.

You can play Opus Magnum on PC, Mac and Linux. Hopefully it comes to more platforms once it leaves Early Access -- the interface already works fine on my laptop's touchscreen, so for sure it would be a good fit for mobile or Switch. In the meantime, enjoy my horrendously inefficient solution to another simple puzzle:

In this article: av, gaming, newirl, opusmagnum, thebuyersguide, zachtronics
All products recommended by Engadget are selected by our editorial team, independent of our parent company. Some of our stories include affiliate links. If you buy something through one of these links, we may earn an affiliate commission.